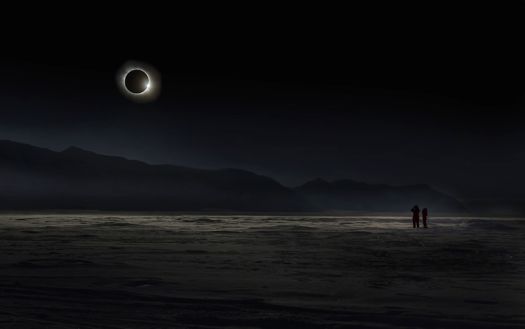 On the 10th of June 2021 there will be an annular solar eclipse, meaning the Moon will not completely cover the Sun. The eclipse path will cover the arctic region. For people living there, the eclipse will appear as a ‘ring of fire’. This will be the 23rd eclipse of the solar Saros series 147, The eclipse path will begin near Winnipeg, Canada and will end in the Russian far east, passing directly over the North Pole, with the maxim eclipse occurring at the Nares Strait. There is some good symbolism in this eclipse, especially for the US and Russia.

The chart for the exact eclipse, astrologically, is below (bigger): 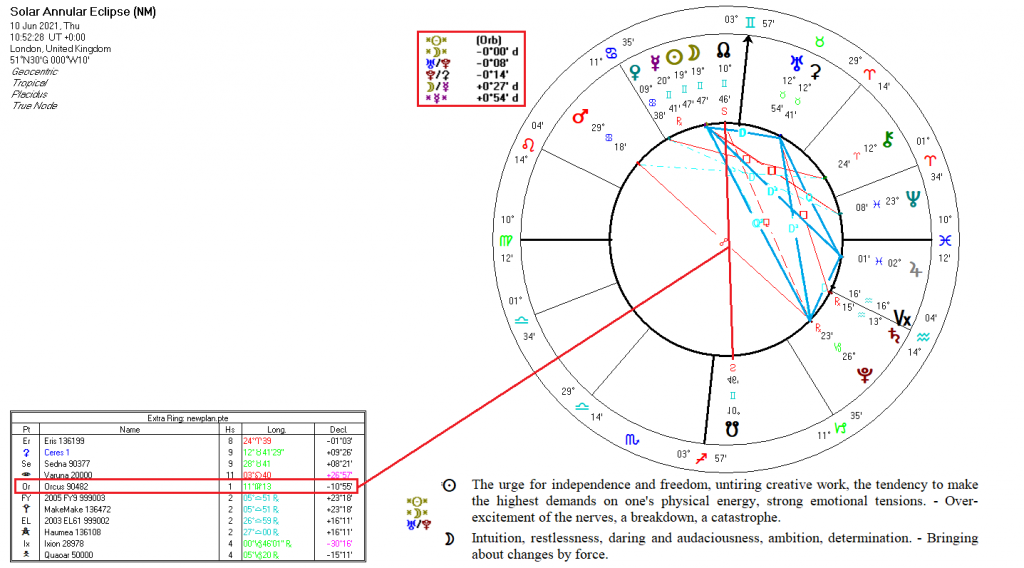 “A modern cafeteria displays an abundance of food, products of various regions”

We will come back to the meaning of the symbol later. One of the interesting features of this eclipse series in that it does not produce any total or hybrid eclipses, the more powerful types of eclipses. Instead, the series is approaching its maximum potential for producing events, in what would normally be the total eclipse section of a Saros series. Being a solar eclipse, the special emphasis here is on leadership. Previous eclipses in this series took place on the following dates, with the events from the first Mars activations:

All the preceding dates fell within the three major spiritual months of Aries – Gemini, and all of them were annular eclipses, with the 1913 eclipse beginning the annular eclipses in the series. As we can see, they have heralded important events, or events that led into important events. The dates above are all noteworthy, as they all tied in with significant shifts in leadership and geopolitics. This eclipse will be particularly interesting watch regarding the latter.

The times to watch for the activations of the points just mentioned are as follows:

This eclipse will not be ‘finished’ by outer planets. There are a few points to keep in mind, though, going back to the chart. There is an applying square by the Sun/Moon axis to Neptune, pointing to heightened sensitivities, fanciful thinking, mistakes, misunderstandings, illusions and deceptions and the undermining of relations, applied to a mundane figure as this is.

Secondly, the nodal axis has to be carefully considered in any eclipse chart. This one has Orcus, ‘The Disciplinarian’, at the bending of the nodes at the 12th degree of Virgo. International law will be front and center with this eclipse. We already know international relations between the West and Asian nations, Russia included, are very strained at the moment. Russia, China and Iran – the ‘Axis of Greater Eurasian integration and development’ – continually toe the line of the UN charter, while the West, led by the US and Europe, seek to ply their ‘rules-based order’.

For the West, the current state of affairs is put forward by them in terms of an ideological struggle, while the East seeks practical, win-win solutions. Nowhere is this more apparent than in the rhetoric that flies back and forth between Russia and the US. Who will win out is anyone’s guess at this point, but a pretty safe bet would be on the Russians and Greater Eurasia. They are going from strength to strength while the West struggles, the former taking a more disciplined approach to matters. Therein lies their making good use of this eclipse, given the influence of Orcus. Being agreement-capable will show who will be a big winner with this eclipse.

Lastly, but very importantly, we come to the midpoints to the eclipse axis, shown in the red box on the chart, and outlined at the bottom. This will be another eclipse similar to the May ‘67 eclipse, except this one will be more powerful due to the interlocked quintile pattern (shown in blue) and with Uranus and Pluto being in aspect, even though a minor aspect. In a few words, this eclipse will upset the world order and leave little doubt about the direction forward internationally. It will bring about crisis, both at the time of the eclipse and with the subsequent activations. A brief look ahead at some forthcoming events will tell us why.

In just under a week after the eclipse, there will be a summit between Biden and Putin at Geneva on the 16th. This goes along with the G7 meeting. It is not expected that anything will be resolved. What is expected is for Putin to be much sharper with Biden about the recent event in Belarus, on human rights, on Ukraine and so forth. The Russians have had enough of the constant stream of negative press and fabrication about Russian motives coming out of Washington and the US press. The Russians have no illusions about Washington’s motives or rhetoric and have flatly stated they will start to bite back at provocations and will act asymmetrically to such acts. Both nations will have their respective Mars placements activated by this eclipse. And when it comes to it, Israel needs careful watching in the months ahead, as the situation there will be most unstable and tense, considering the eclipse falls near their Uranus.

There are elections in Iran two days after the Biden-Putin summit. A hardliner is expected to be elected. The US has been disingenuous about re-entering the JCPOA, and the Iranians are under no illusions to that effect. We can expect the nuclear inspectors to be leaving Iran in total within months. Then, the US and Israel will be left with the quandary of what to do about it. The wiser course would be to re-enter the JCPOA and to lift all the Trump sanctions unilaterally. That, too, is very unlikely to happen.

There are the much anticipated German elections in September. Anything can happen there. The Greens are the preferred Party for the US, but it will be a hard fought race. Nord Stream 2 will be running in its first leg by then, with the 2nd leg due to be completed around that time. That in itself has Ukraine, Poland and the Baltic States up in arms and will be a strong point of tensions. Their hope would be the Greens would shut down Nord Stream 2. That, too, is unlikely to happen. German industrialists are adamant they want the Russian gas, as are most German consumers.

Overall, this eclipse, like the ones before it, will bring positive results over the long term in the areas of technology and humanitarian concerns. If you have significant points in your chart along the 20th degree of the Gemini/Sagittarius axis, this eclipse should bring some good results for you, unless those points are stressfully aspected. The dates preceding should give some clues as to what to expect, looking back through one’s life.

What one might think of as ‘good results’ have not always been the case with results from activations of this series, but some of the technology has been world-changing. The eclipse will signal fundamental shifts in policy. And when Uranus and Pluto are involved with the Sun and the Moon, as they are with the midpoints in this eclipse, we can expect the unexpected, some good advances in technologies (the Chinese just fired up their fusion reactor for over 1½ minutes, which is a very positive sign). Alas, we can also expect the usual run of disasters and missteps that come with solar eclipses and their activations – and especially with the involvement of Uranus and Pluto.

Mention was made at the start of the Sabian symbol, of the market displaying products and foods of various regions. The symbol describes the type of topics that should be discussed at the G7-Instead, the meeting is shaping up to be the G7 against Russia and also Chine. It is the Russians and the Chinese who are offering the fruits of their markets to the Global South. Instead the East is likely to get an icy reception in the immediate months ahead, which leads us to consideration of the opposite pole of the eclipse point at the 20th degree of Sagittarius:

“In an old-fashioned northern village, men cut the ice of a frozen pond for use during the summer.”

This is an arctic eclipse, after all. With any luck and all and a pinch of goodwill, this eclipse will help to break the ice between old adversaries and bring a thaw to what has all the appearances of a new Cold War. Watch for the activation dates of this eclipse. There may well be some pleasant surprises to come from it. And if you live in the Far North, enjoy the eclipse!