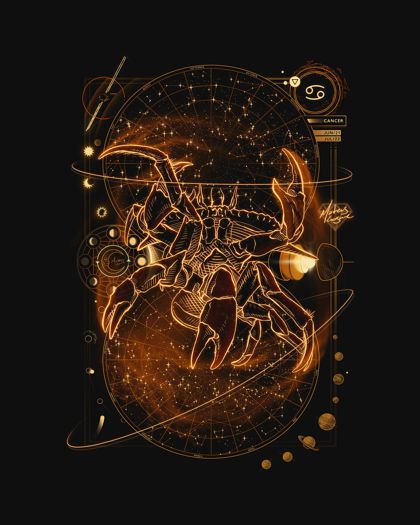 The Aries to Cancer quarter for 2021 has been quite an exciting period, with Mars out-of-bounds for two-thirds of the quarter. ‘Exciting’ may not be the word some readers would use to describe a quarter marked by the world being on the edge of WWIII over the Donbass, a war in Israel between Hamas and the IDF, an insurrection by Palestinians against Israeli security forces, the strange case of the Ryanair flight in Belarus, the Ever Given incident, and so forth. But yet to other readers, some other rather major and positive changes have come out of that period. The Aries quarter lived up to its forecast and then some. The Cancer-to-Libra quarter will appear to be a smoother ride, but beware the hidden agendas, the big fails and blunders and the tests of nerves. For this quarter, security concerns will see marked and perhaps revolutionary crossroads and turning points.

Before we get to the chart and the forecast for this quarter, we take a look back at the last quarter to see the tone that has been set thus far. The forecast for the previous quarter contained the following statements:

“…the Aries quarter will be marked by sudden events, some upsets, strong rhetoric and ‘messaging’, rebellion and a strong urge to freedom. We will see these sorts of events at home and abroad. And with the new boss in town (or so he thinks), we already see that the more things change sometimes, the more they stay the same.”

The ‘new boss’ of course refers to Joe Biden, and we already see that things will largely remain the same, despite what more hopeful liberal pundits and readers might think. He has already reneged on any progressive programs and some of his campaign promises. From appearances, it appears the American public has been had once again. For instance, the following turned out to be just a dream:

If it is not apparent by now, the Republicans in Congress will use Biden’s rhetoric of bi-partisan consensus against him and stonewall any initiative that even hints at progressive politics or which involves raising taxes. Real leadership would push through those programs which are popular with the majority of Americans, knowing there will never be agreement with Republicans. Unless Democrats can get some of these measures passed, their chances at the 2022 midterms look dim. The Cancer quarter will be especially trying for Joe Biden, as well as for the leadership in the United States in general.

As for the bolded points in the forecast above, we had the following, in order:

All of the preceding occurred while Mars was out-of-bounds, and the list is not all-inclusive. In addition to the preceding, there was another forecast for the quarter, from the same post:

“There are a few key events to take place in this quarter that will set a bigger agenda into the next few years, involving the whole of Asia and especially the Far East and West Asia.”

Of those, the Ever Given incident, the Iran-China partnership and the Israeli crisis will be the ones to watch for changes in Asia and West Asia. And now there are noises of Biden planning the authorization of strikes against ‘Iran-backed’ (Shia) forces in Iraq, who are basically the Iraqi resistance to the American occupation. According to Magnier, if that happens “…the gate of Hell will be open on the US in Iraq.” There is talk of a greater jihad in West Asia since the recent Hamas-Israel war. It may start in Iraq rather than Israel, but it would spread to Israel nonetheless. That brings us to the current ingress. The figure is below (bigger): 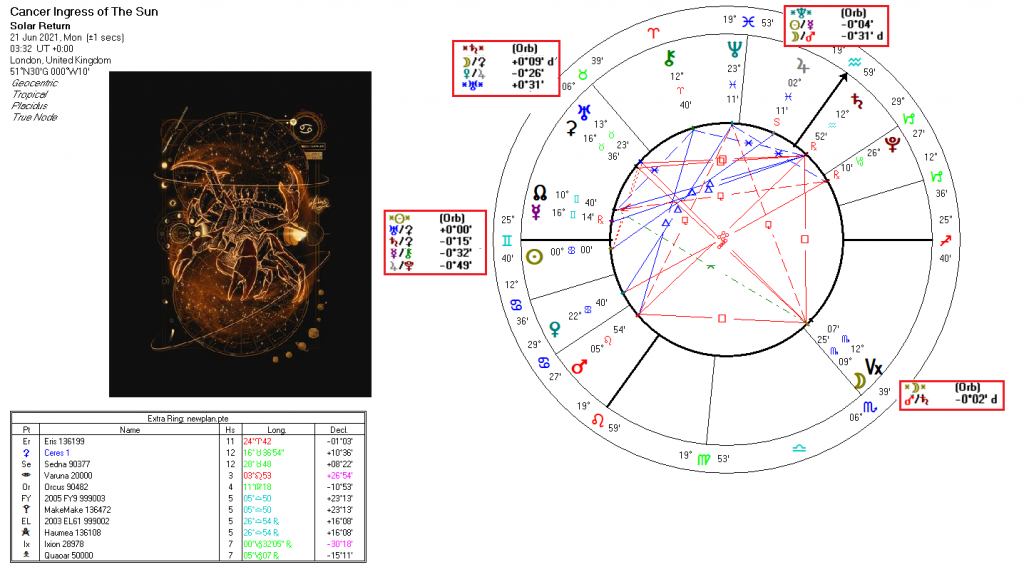 The first and most dominant feature of the chart is the trine between the Sun and Jupiter. This in itself would mark a most fortunate and expansive quarter. Jupiter has entered Pisces, which will bring the focus to all matters of religion, along with goodwill, altruism, a love of comfort, as well as enhancing the capacity for enjoyment. If there were no other indications in the chart, that is what we would expect for the quarter, and it will be a powerful influence throughout the Cancer quarter. However…

There are many midpoints made by the Sun, most of them ‘hidden’ (i.e., by the 45° modulus), with one of particular importance. We see Uranus and Ceres conjunct in the figure, indicating sudden turns of destiny and they form the midpoint, Sun=Ceres/Uranus: Sudden upsets, revolutionaries and revolution, unique technical breakthroughs, uprisings against restrictive conditions, reckless behavior that changes the direction of established institutions. Since the Sun is semisquare the two planets, this midpoint has a pronounced potency, especially as the Sun is at the midpoint.

Another midpoint that must be considered, especially as the midpoint planet is also the apex of a t-square, is the midpoint, Moon=Mars/Saturn: “Weakness of will, a mood or fit of depression, lack of courage. – Illness, separation or death of females.” In a mundane figure, the Moon also represents the general populace, especially in considering the bit about deaths. We won’t read too much into this, but the prevailing mood in parts of the world will not be bright, though a window towards a better outlook is indicated by the Sun/Jupiter trine.

The Moon rules Cancer in the mundane, and any aspects and midpoints to it deserve greater attention in Cancer ingress figures. With the Moon pointing toward the general populace and women in general, as well as bodies of water, we note the Moon is in Scorpio and receives only hard aspects. As stated previously, it is at the apex of the t-square with the Mars/Saturn opposition as the base. The Moon in Scorpio can in itself mark a fighting spirit, tough emotions, a passionate outlook, ambition and the fight for survival, to name a few facets.

The Moon opposes the Ceres/Uranus conjunction, forming the base of another t-square with Saturn as the apex planet, and it is in the base square that forms a ‘Finger of the World’ triangle with Neptune as the apex planet. The basic interpretation of this is the public in general will be put under particular stress this quarter. It will be useful to briefly parse these aspects and patterns.

The Moon as the apex of the t-square and focus of the Mars/Saturn midpoint has just been described. There will be a general undercurrent of public dissatisfaction this quarter, despite the positive spin (Sun/Jupiter) from the media regarding vaccine rates, falling pandemic numbers, economic growth figures and so forth. On the other side, the public will also be subjected to negative propaganda regarding the West’s favored enemies, all the while what the public really wants is economic relief and an end to the pandemic – for life to return to a sense of normalcy, in other words.

The Finger of the World combination containing the Moon has the following characteristics: a negative attitude or character, weakness of will, the tendency to worry a lot, the state of fretfulness and of grief, a misdirection of energy. – A misdirected emotional life, undermining circumstances affecting the family-life detrimentally. It is an impulsive and quick-tempered combination, shown in the base Moon/Mars square, with the Neptune apex showing misdirection of energies and a generalized insecurity.

If the preceding few paragraphs sound dark, keep in mind the Sun/Jupiter trine will overshadow that to a degree. But at the same time, Western economies and those of developing nations in Southeast Asia are still being battered by the COVID crisis. The one-time relief check in the US will not go far. Economies in the collective West have been sluggish since 2008. Evictions from houses start in this quarter, as rent relief runs out in the US. It is a renter’s market in the US, with asset prices soaring, all the while Main Street does not see the benefits. And then there is the insecurity represented in places like West Asia and the continuing efforts by the West to drive wedges between Europe and China, and Europe and Russia. That brings in the next t-square.

The dance of the Saturn/Uranus square continues, with that square having been exact on the 14th of June, a week before the ingress. That was an overshadowing conjunction, in the retrograde phase of Saturn. Saturn will be retrograde throughout the quarter, as will Jupiter. The last exact square of Saturn and Uranus for this round comes at the end of this year, covered in the Capricorn ingress to come.

There is a general reading for the t-square Moon/Uranus=Saturn, as follows: suppression of emotions leading to sudden outbursts, sudden damage, the urge for independence, the sudden upwelling of subconscious forces. The Moon/Saturn square is a powerful aspect, giving strong creative force, much as it might seem to the contrary, and well-directed energy when harnessed effectively. This t-square is one to be watched, because it can result in unexpected victories against seeming insuperable odds, as well as in reckless behavior as a rebellion against restrictions.

Thus, with this ingress figure, we see two distinct lines of action: Optimism by leadership on the one hand (the Sun trine to Jupiter), with a more open society as the coronavirus recedes, but on the other hand the frustrations of the public in many lands boiling out in response and reaction to the actions of more repressive states and affairs.

In all, the Cancer-to-Libra quarter for 2021 proves to be a most interesting period, and one that will see some distinct changes in direction, some for the better, some towards a more sober reassessment of realities. Idealism will be running high throughout the quarter (Sun/Jupiter and Venus/Neptune trines), but reality will bite, and bite hard (the squares and opposition to the Moon). This will be especially evident in the US, UK and in West Asia.

Given the recent crisis in the 1948 borders of Israel, the Resistance stands at the ready, along with Hamas now, with fingers ready at triggers across the region. If Sun/Jupiter prevails, moves toward peace will eventuate. If the Moon aspects and configurations prevail, then we can expect a very ‘lively and exciting’ quarter, indeed!