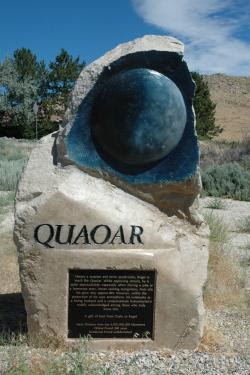 There are now nine named planetary bodies in the solar system that are firmly classified as dwarf planets – Ceres, Pluto, Eris, Makemake, Haumea, Orcus, Gonggong, Sedna and the one we will consider here – Quaoar. There are no doubt many more such bodies, and then there are 19 moons of the major planets that are thought to be captured dwarf planets. Some of the other named such bodies in the solar system that are dwarf planet candidates are Ixion, Salacia, Chaos, Varuna, Varda, and possibly Huya. They are all fascinating little worlds and add richly to our astrological catalog and practice. This one – Quaoar – was also known as Chinigchinix to the Tongva people.

Quaoar was discovered from three pre-covery plates on 4 Jun 2002, the last plate being taken at 1:42 am PDT (in astronomical records, the time was 2002 06 04.36255, which translates to 08:42 UT) in Pasadena, CA. The plates covered a span of 4.5 hours. Whichever time one uses, for either the first or the last plate, the discovery chart will show basically the same aspects, though the houses will be different. The chart for the last plate, which confirmed the discovery, is below (bigger): 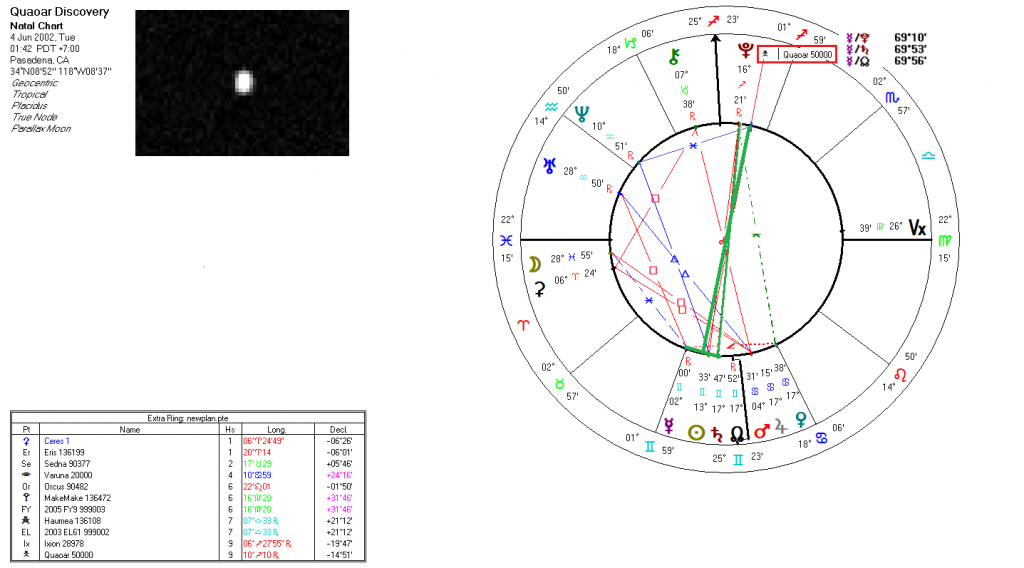 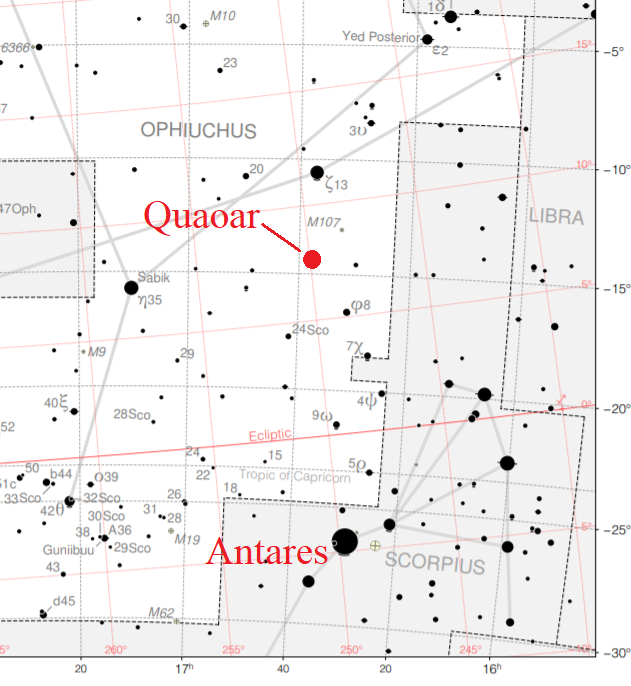 Quaoar is large as far as trans-Neptunian planets go. It is classed as a cubewano, or classical Kuiper belt object, and displays no orbital resonance. It is roughly the size of Charon, Pluto’s moon, with a diameter of 1200 km (≈ 700 miles). It has roughly the same type of composition as that of Pluto. Quaoar’s orbit is nearly circular, with an orbital period of 288.8 years. Its orbit passes through five non-zodiacal constellations – Sextans, the Sextant, Serpens Cauda, the Serpent’s Tail; Scutum, the Shield; Cetus, the Sea Monster and Orion, the Hunter.

Quaoar has one moon, Weywot, at 170 km (110 miles) in diameter, in synchronous orbit. The latter was discovered on Valentine’s day 2006. The mythology of Weywot is key to understanding the action and purpose of Quaoar:

Another important figure is Weywot, the god of the sky, who was created by Quaoar. Weywot ruled over the Tongva, but he was very cruel, and he was finally killed by his own sons. When the Tongva assembled to decide what to do next, they had a vision of a ghostly being who called himself Quaoar, who said he had come to restore order and to give laws to the people. After he had given instructions as to which groups would have political and spiritual leadership, he began to dance and slowly ascended into heaven.[1]

The projected zodiacal longitude for Quaoar was 10 Sag 10 retrograde at the time of its discovery. The Sabian symbol for the discovery degree is of interest:

“In the left section of an archaic temple, a lamp burns in a container shaped like a human body.”

The suggestion here is that, as a creator deity, Quaoar is the ‘light that precedes creation’, or the fire of creative energy. The shape of the body is clear. The form is not yet animated, or alternatively, the creative fire has receded so only the outer shape is illuminated. The preceding gives us a basis for beginning to parse the actions of Quaoar in a horoscope.

In an excerpt from one of my several unpublished books: “Quaoar[2] was a creation deity in the mythology of the Tongva people of North America, from the area around what is now Los Angeles. 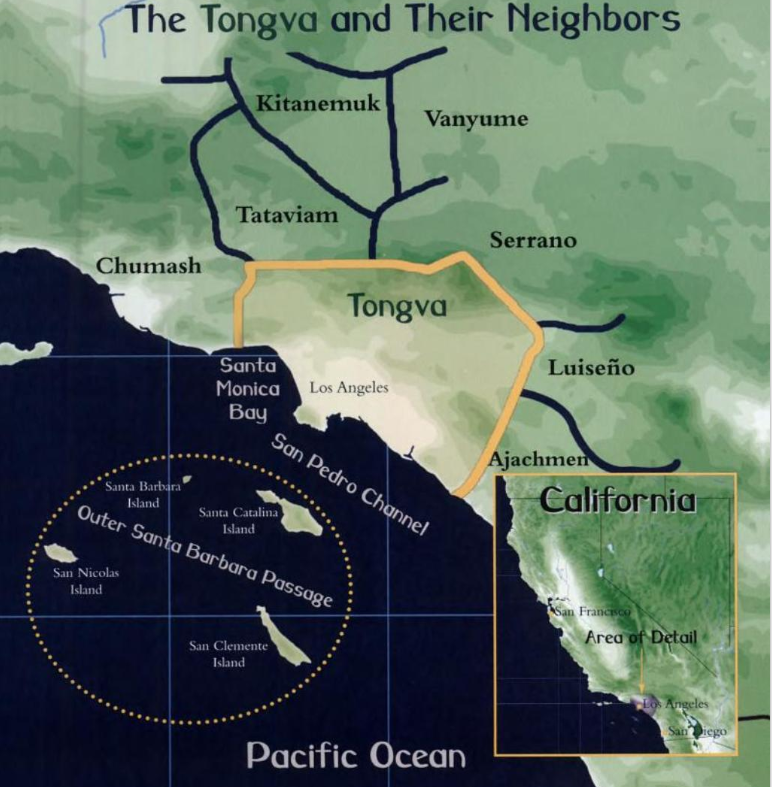 As the myth is told, out of primordial chaos, Quaoar sang and danced the world and the higher deities into existence, and then receded once his work was done, fading into obscurity. This is the short version of the story. The myth of Weywot gives another perspective.

Quaoar is suggestive of a creative force which lies beyond human perception. As such it can represent a portal through which something of the primordial mind[3] can be accessed. To me, Quaoar represents a now-latent creative force which can be roused into activity for the purpose of bringing a new order to life and renewed creative impulses. I would see it as functioning in the realm of the immediate unconscious. It is somewhat reminiscent of the Silent Watcher[4], or at least the higher Self, though not analogous with it. Like the dwarf planet Eris, it brings with it fresh perspectives; but unlike Eris, its energies must be invoked, which must be approached through ritual, music and movement (re: the dancing nature of the myth). Most of all, though, Quaoar’s great gift to humanity comes via the imagination.”

These ideas are further reinforced by the midpoints formed by Quaoar: Qua=Mer/Sat, Qua=Mer/Plu and Qua=Mer/Node. The Saturn/Pluto/Node combinations point to the Weywot narrative, which is what invoked the actions of Quaoar. That combination of factors points to the shared suffering of the masses, sacrificing oneself for others and fighting against oppression.

The Mercury/Saturn midpoint points to a capacity for deep mental work, sustained mental effort and slow but sure advancement. That midpoints indicates a pathway toward accessing Quaoar’s gifts. The Mercury/Pluto midpoint can show fraudsters, powers of persuasion, the power of speaking and writing and the ability to resist intellectually. It gives good powers of debate and deduction. Coupled with the Mercury/Saturn, it gives the power to rise above difficulties through reasoning and imagination. The Mercury/Node midpoint shows shared ideas, common plans and shared destiny, especially intellectually so.

Quaoar appears to have a particular affinity with the arts and sciences, given the preceding points, and particularly the psychological and neurosciences with regard to the sciences. Unless one can use the imagination, Quaoar as a factor in the horoscope is never realized. Its influence in the chart has produced an august lineage of poets, writers, actors, film directors, musicians and scientists. Some of the more notable figures who were able to utilize its energy are Albert Einstein, Peter Sellers and Paul McCartney, all of whom had Quaoar on their ascendant. Out of chaos, creativity and a new order arises.

Quaoar also appears to have some sort of connection with financial crises and the creativity that can come out of those crises, especially when it enters the boundaries of constellations, indicating a shift in consciousness or attention in the social order. Financial crises produce chaos in our societies, as presently constructed. Economics is a prime mover these days in social evolution, or devolution, and is the present vehicle for shared prosperity or suffering. It is a little planet that bears more than a casual look.

When prominently place in a horoscope, Quaoar indicates an area of life where imaginative thinking and ritual become particularly important in the solution to life’s challenges, or as a vehicle to creative output. This is especially true when Quaoar is conjunct the angles in a chart or the nodes. Any planet on the ascendant, for instance, will ‘speak’ through a person. And, Quaoar is at its best when it is directed toward the greater good of a society and the healing of social ills, going back to its discovery position in Ophiuchus, and in ‘cleaning up the mess from the past’. It harks back to a few quotes from Einstein, who had Quaoar in and on his ascendant:

“Imagination is more important than knowledge. For knowledge is limited, whereas imagination embraces the entire world, stimulating progress, giving birth to evolution. It is, strictly speaking, a real factor in scientific research.”

“The supreme task of the physicist is to arrive at those universal elementary laws from which the cosmos can be built up by pure deduction. There is no logical path to these laws; only intuition, resting on sympathetic understanding of experience, can reach them.”

“If I were not a physicist, I would probably be a musician. I often think in music. I live my daydreams in music. I see my life in terms of music. … I cannot tell if I would have done any creative work of importance in music, but I do know that I get most joy in life out of my violin.”

A ‘ghostly figure’ that gradually fades and ascends to the sky once it has given its laws…Well, we have to ‘ascend to the sky’ (go inward), imagining a way forward. It sounds very much like tantric (Vajrayana) meditation in a way. Quaoar calls to us to let our imaginings soar, and then to make them realities through the rituals of everyday living.

People with Quaoar within 2° of the ascendant, Quaoar in the 1st house:

[2] Pronounced kwa oar, but all as one syllable.

[3] This is the clear light achieved and contacted through advanced meditative practices. Otherwise, it is quiescent in our outer affairs.

[4] The monad, or highest essence of a human being. The eternal part of ourselves, relatively speaking.