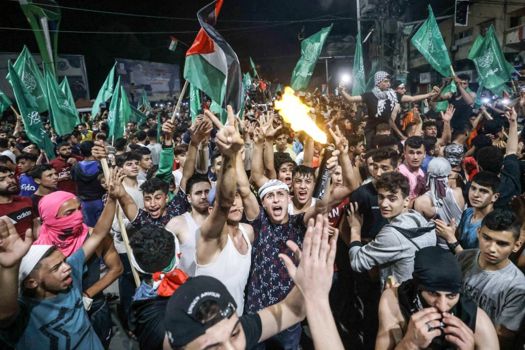 Update on Palestine, 21 May 2021: A ceasefire was declared for 2:00 am on the 21st in the Gaza bombing campaign, “Operation Guardian of the Walls”. The Palestinians have prevailed. It was a unilateral ceasefire on the part of the Israelis, voted for unanimously by the Israeli Security Cabinet. This came after a phone call by Biden on Wednesday, where he stated that “he expected a significant de-escalation today on the path to a ceasefire“. The Israeli bombings ended with a phone call. Hamas followed suit. There were celebrations well into the night in Gaza and Jerusalem. Palestinians were praying freely in Al-Aqsa mosque Friday morning.

The chart for the ceasefire is below (bigger). We won’t analyze it here, except to say the Sun had just entered Gemini, showing the calming of tensions between ‘the quarreling brothers’ – the twins of Gemini in other words. The Sun had been trine to Pluto in the past days, showing the increased diplomatic activity behind the scenes on the part of the Egyptians, who brokered the ceasefire. Libra was on the Descendant, also showing the diplomacy involved. The Moon was trine Uranus, showing the suddenness of the event, and was also sextile to Mars, easing the tensions. And lastly, the Sun was in a partile square with Jupiter, showing the exuberance of the celebrations by Palestinians. 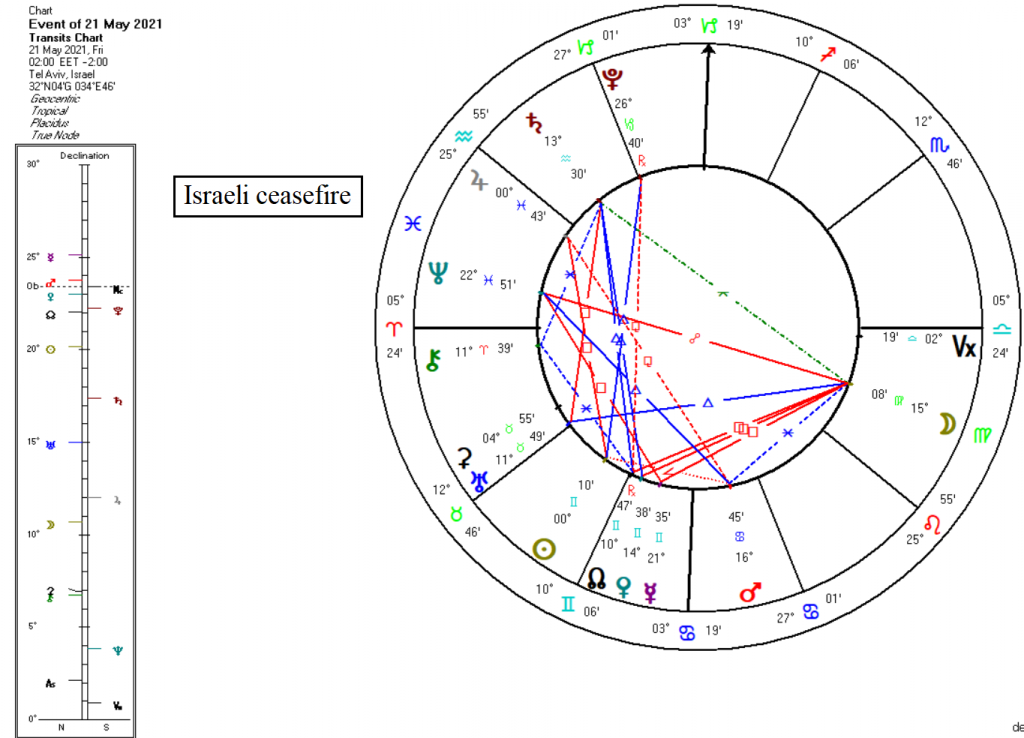 Both sides are claiming victory. On the whole, though, it was a small but very significant victory for the Palestinians and a first step on the way to Palestinian liberation from the apartheid state, despite the heavy losses in lives and infrastructure they suffered. The Israeli reaction to the ceasefire is more subdued, with people on the street saying there will be no peace until Hamas is wiped out. They are also saying the ceasefire is a loss for Israel. It is true there will be no real peace in the interim, but it is questionable Hamas will ever be wiped out. Israeli invincibility and impunity has been punctured.

What has emerged from this, then? There will be reassessments on both sides, about what happened, about strategy, about the way forward. On the Israeli side, Bibi’s alleged purpose in dragging out the bombing was solely political, in that he wanted to go on for longer to shore up his support in the Knesset. Instead, he is losing support within Likud. His political fortunes appear at the moment to be diminished, consistent with his astrology. Insiders within his party stated as much:

“Netanyahu is drawing out the operation in Gaza because Lapid is holding the mandate,” a senior political adviser in the party says. “He doesn’t seem to have a real desire to eradicate Hamas. Relations between the Arabs in Israel and Jews are being left in ruins,” the adviser says. “Netanyahu is galloping toward a fifth election and taking the country hostage. The collapse of right-wing chairman Naftali Bennett gives him a boost, but support for him within the Likud is weakening.” Other elements in the right-wing bloc tell the newspaper that it is thought Netanyahu believes the conflict with Hamas will boost his image in fifth elections. “He is building on the fact that Yamina will be wiped out,” unnamed party officials tell the newspaper.”

After the ceasefire was announced, Bibi was nowhere in sight. Some politicians in Israel slammed him for the ceasefire, saying it was an embarrassment for Israel and that the bombing of Gaza accomplished nothing. This was despite Bibi’s assertions that the operations were “extraordinarily achieved”. This sort of rhetoric is rolled out after every war with Gaza, with the addition that Hamas had been ‘defeated’. What we had with the extended bombing, then, and if the preceding is true, was a political act by Netanyahu instead of Israel’s ‘self-defense’. Bibi had to surrender to Biden and blamed the ceasefire on the IDF and security forces.

At the end of hostilities, there were 12 dead Israelis as a result, but 261 Palestinians dead and close to 2,000 injured. Of the Palestinian dead, 65 of those were children. Israel claims there were ‘hundreds’ of Hamas militants killed, but that would appear to be hyperbole and doesn’t tally with UN figures. But it is an attempt to boost the confidence of the populace, along with the claims of 60 – 100 miles of Hamas’ tunnels being destroyed. A quick look at the geography of Gaza puts that figure highly in question. Gaza is only 27 miles long and 7 miles wide. The IDF is known to exaggerate successes and to minimize defeats. They call their bombing campaigns in Gaza, “mowing the lawn”.

During the operations on both sides, a young journalist working for the Associated Press, the building housing the organization in Gaza having been flattened by Israeli bombing, was unceremoniously fired from her job after pressure from conservatives, following their discovery of her past social media postings in support of Palestinians. This was an example of conservative ‘cancel culture’ and only goes to demonstrate the bias and control exerted over US media.

Given the bias in US media toward Israel, here are a few ‘facts on the ground’ you will not hear in mainstream news, relative to what has just taken place over the last days:

From the previous post, it would appear that the first phase of a larger plan by the Resistance has been fulfilled. The Israeli actions in East Jerusalem and in Sheikh Jarrah have for the moment been halted. An uneasy truce has been achieved. But unless Israel changes its behavior, the peace will not last. Palestinians will now begin to push harder for their rights, as in ending the blockade, for starts. Hamas has made gains in the past seven years despite the blockade and minimal support. Western attitudes have shifted slightly away from full-throated support for Israel. It could very well be that the increasing number of Democrat voices rising against Israeli actions prompted Biden’s phone call to Netanyahu.

China will be sending emergency humanitarian aid to the Palestinians, while the US is sending replacement interceptors for the Iron Dome. The interceptors are manufactured in the US. Biden also promised to send humanitarian aid to Gaza, however, and to help in its reconstruction. Such help in reconstruction efforts in Gaza by the US in the past have been lackluster at best.

Ultimately, we will not see any immediate change in the dynamics between the Palestinians and the Israelis – until the next flare-up. And that may be in the next few days, even. Not even a day had passed when Israeli soldiers started firing tear gas and rubber bullets into Al-Aqsa mosque, again.

We watch as these next few months unfold as to Bibi’s fortunes and to Palestinian demands for change. A new Middle East/West Asia is emerging.