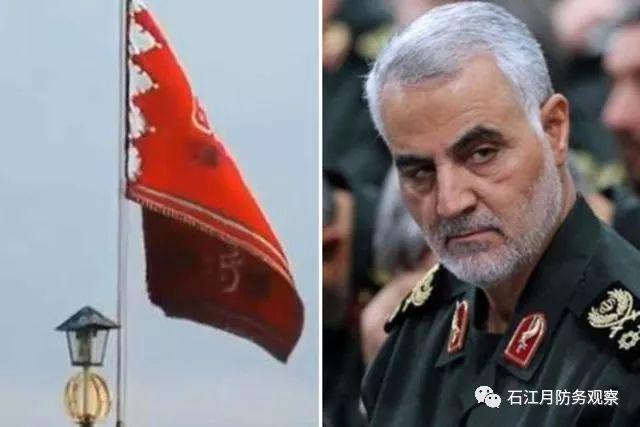 Red flags can signify many things. There is one in particular that reflects the old maxim: Revenge is a dish best served cold. On 4 January the Iranians hoisted their red flag on the top of Jamkaran Mosque, in Qom, Iran in response to the assassination of their favorite son, Major General Qasem Soleimani. He was targeted in what has turned out to be an act of treachery by the Trump administration, which we will examine in due course, and in what will probably come to be known as one of the greatest blunders of foreign policy strategy in recent US history. If this already sounds like an apologist piece, read on, because appearances are often deceptive and as is usually the case, there is more to this than meets the eye.

Soleimani was targeted in his assassination while leaving the Baghdad airport at either 11:00 pm Baghdad time on the 2nd, or at 1:00 am on the 3rd, depending on the source. The Wikipedia article gives the 1:00 am time (chart), while Elijah Magnier gives the 11:00 pm time. As always, time is of the essence in astrology. However, in either case, the charts reveal quite important details. We will be using the 11:00 pm chart here.

The reason for using the 11:00 pm chart is as follows: Soleimani left Damascus on a commercial flight the evening of the 2nd on the last flight out, a direct flight, which arrived in Baghdad (scheduled) at 10:50 pm on the 2nd. The reason we know this is from a quick look at flights from Damascus to Baghdad. The last one arrives in Baghdad at 10:50. It is doubtful, given security, that Soleimani would have been left loitering at the airport for two hours. He was to meet with Iraqi PM Mahdi at 8:30 the next morning. The chart is below (bigger): 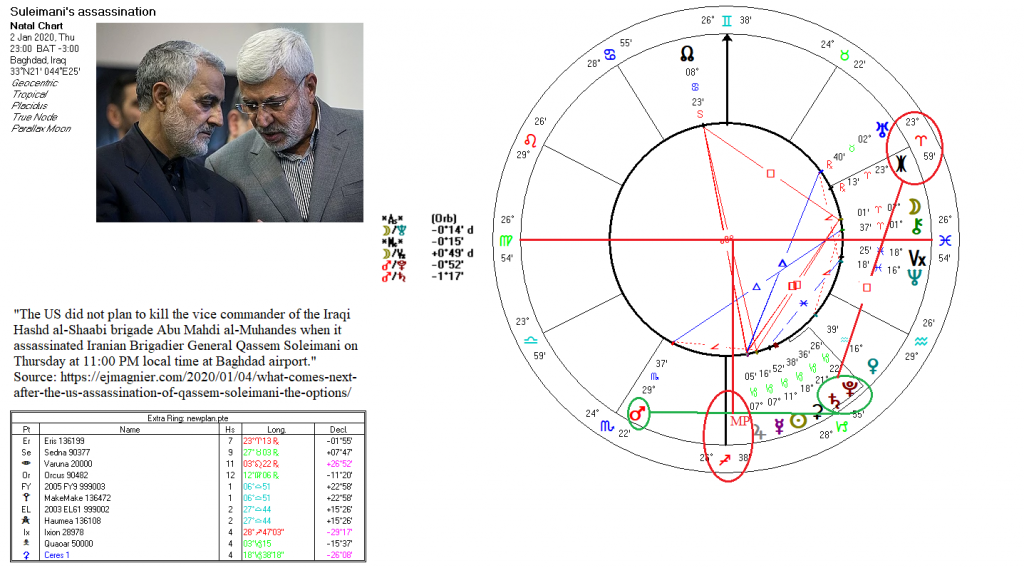 We won’t go into great detail about the chart, save for a few points, as there is too much to cover here. The immediate factors that stand out are the midpoints, seen to the left of the Ascendant. Asc=MC=Mar/Sat=Mar/Plu pretty well describes the event: a precisely targeted strike (Virgo rising), “the desire to face danger” (which Soleimani always exhibited), “the misfortune to face overwhelming force without power, danger through the intervention of Higher Power” – both of these from the Mar/Plu midpoint – the ability to bear the suffering of the soul (with dignity and without complaint), mourning and bereavement (death), from the Mar/Sat midpoint.

Soleimani made no secret of his whereabouts. Otherwise he would not have taken a commercial flight. He had a standard mobile phone, which he called his ‘companion spy’. He expected at some point in his life to be killed, either in war or martyred, in fact inviting it:

According to sources, in Syria, Soleimani “never hesitated to jump inside a truck, ride an ordinary car, take the first helicopter, or travel on a transport or cargo plane as needed. He did not take any security precautions but used his phone (which he called a companion spy) freely because he believed that when the decision came to assassinate him, he would follow his destiny. He looked forward to becoming a martyr because he had already lived long.”

According to the chart and the event, he got his wish. There is a wider view to the chart, though, which fits in with the Saturn/Pluto conjunction and eclipse in a few days. In the chart we see that conjunction square to Eris, which is conjunct the 8th house cusp from the 7th, within a degree. This event will lead to sweeping changes in the Middle East, and could be seen as the ‘golden apple’ moment that leads to the destruction of Troy, in this case representing US/Zionist imperial ambitions in the region. Soleimani has just accomplished more with his murder than he was able to do in life. Now we get to the crux of the meaning of his death.

There are several theories floating around as to why he was ‘taken out’, to use Trump’s lingo: