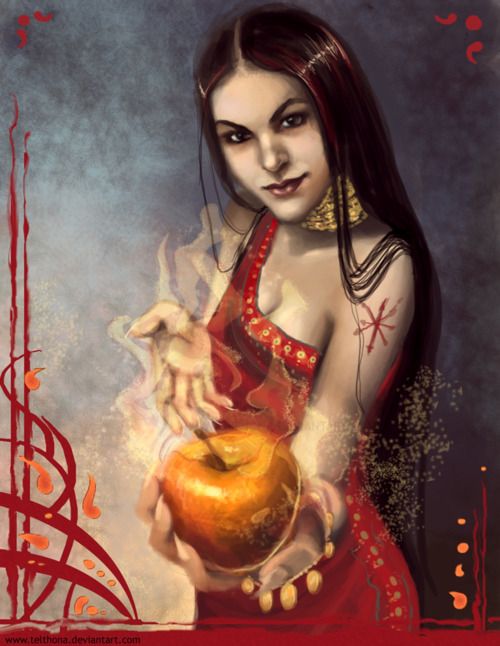 Have you ever wondered if there is an astrological reason for why the rhetoric out of Washington has become so bellicose and otherwise tending toward the insane or unbelievable at times in recent years? It turns out that there is indeed an astrological indicator for it, and it relates to one of our ‘newest’ planets in astrology, Eris.

Eris is the little world whose discovery caused Pluto to be knocked down a peg, rendering him a dwarf planet. Eris is a little larger than Pluto, and size matters in the classification of planets. She is known as the goddess of strife and discord. More specifically, she is the daimona of the strife of war, haunting the battlefield and delighting in human bloodshed. I had an article posted on her, a compilation, that I had moved to the background but have now restored, as her influence is now quite pronounced. But in particular, we want to have a look at her in relation to the US, now the most warlike nation in the world.

The discovery chart for Eris is below (bigger): 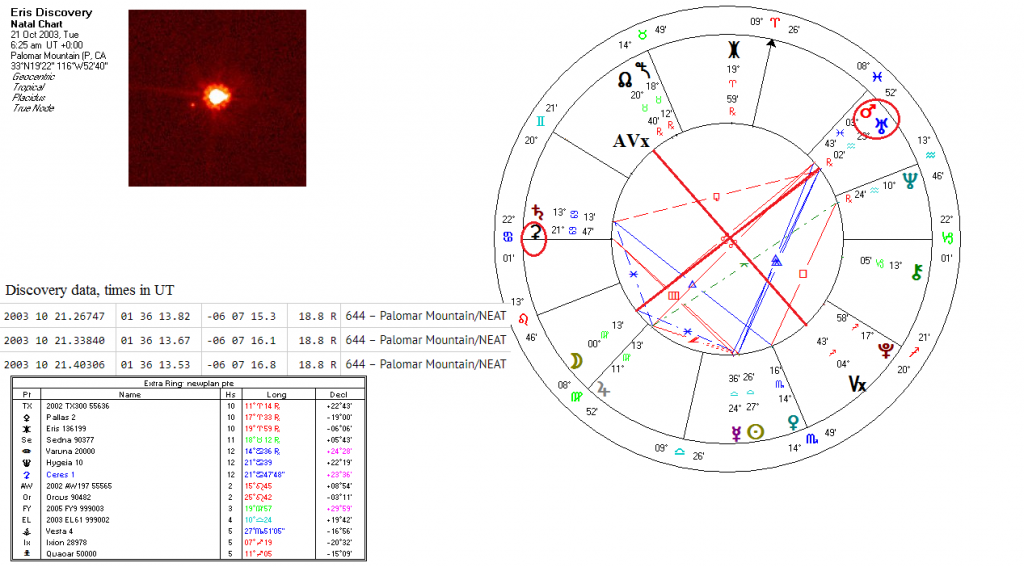 Several factors stand out. First, there is the Mars/Uranus conjunction in the 8th house (death and regeneration), opposite the Moon, the latter representing old orders. The Moon represents the past in esoteric astrology. And the Moon in general represents genealogy, lineages and old orders, along with family and women. With the Mars/Uranus opposite that, we already see that this is a chart that indicates a change of an old order. That is further indicated by Ceres on the Ascendant – a turning point in astronomy, and the female influence of Eris.

Then lastly, we have Mars square the Vertex axis, giving a view toward conflict and warfare in the negative, but prevailing against the odds and the birth of new orders in the positive, the Vertex being in the 5th house (creativity, children, and the birth of new orders). The Antivertex, in the house of alliances (11th) shows the tensions that can develop between erstwhile friends when new circumstances present themselves. Eris is actually a complement to Pluto, and shows the way forward through the door of death that Pluto represents. It was no accident that the discovery of Eris caused a stir about Pluto, as they are both associated with death in their respective ways.

What does this mean for the US, then? Eris, as well as any of the ‘new’ outer planets, will always be active in national charts. In my mind, they should always be consulted and examined in the charts of nations, as they represent collective influences, across generations. In the US chart, Eris was at the 9th degree of Capricorn in the 1st house, retrograde, opposite the US Sun and involved in several significant midpoints.

The Sabian symbol for that degree is telling: “An angel carrying a harp.” What would otherwise be quite a spiritual symbol, is currently being used by the leadership of the nation for ‘other purposes’. Dane Rudhyar had this to say about it:

This picture simply says that “heaven is within us.” All we have to do is to be open and listen to the total harmony of life, a harmony in which we play a part that is necessary to the completeness and meaning of the whole. In order to do this we have to surrender our separative ego-consciousness and flow with the universal current which, to the religiously minded person, is the Will of God.

The US was founded as a break from an old order (Capricorn), meaning the monarchical European model of rule. With Eris opposite its Sun, the nation was revolutionary, and has been in some respects all along. It has always been pioneering, at least until recently. The US represented a high ideal for the time. But it has always also been tested as to its ego desires (Sun) in relation to its ideals and higher way forward, represented by the idealistic Sagittarian Ascendant. That test has been at no time more obvious than it is now.

It has been interesting to trace the transits of Eris through the US chart. We will not go through all of them here, save for a couple. From its founding until the end of the Revolutionary War, Eris was completing its opposition to the US Sun. At the end of the war, Eris was making its last pass retrograde opposite the Sun and had moved to square the US Saturn. In striking ways, that Sun/Saturn square is a defining characteristic of the nation – what Grant Lewi described as, “a somewhat Machiavellian position”. Lewi was one of America’s more insightful astrologers, and his description of that aspect pretty well describes the actions of the US government to a ‘T’ over all the years of American evolution.

There was one more thing Grant Lewi had to say about that Sun/Saturn square, which we see in evidence today as the American empire and influence begin to wane:

“The danger is always that pride and an inability to ﬂex with later circumstances will cause your downfall. You stick to the ship till it sinks, less from principle than from pride, and go down with ﬂying colors, arrogant and deﬁant to the end, and still conscious of your own worth and right.”

The preceding brings us to the consideration of the current Eris transit that is bringing out the belligerence of Washington. It is an echo of one that we had in the period from 1792 – 1794. Students of American history will know that period well, as the ‘Whiskey Rebellion‘. At the time, Eris was transiting opposite the US Mercury. Today it is transiting square the US  Mercury. The Whiskey Rebellion was a tax protest. It is noteworthy that Eris was transiting through the US 2nd house then. The tax was imposed to raise funds to pay for the Revolutionary War debt, and it targeted rural farmers in western Pennsylvania. The Rebellion was also a test of the new government, its constitution and its enforcement, as Mercury rules the 7th (legal disputes) and 9th (the judiciary and national ideals) houses for the US. It was a successful test. The chart with directions and transits is below (bigger): 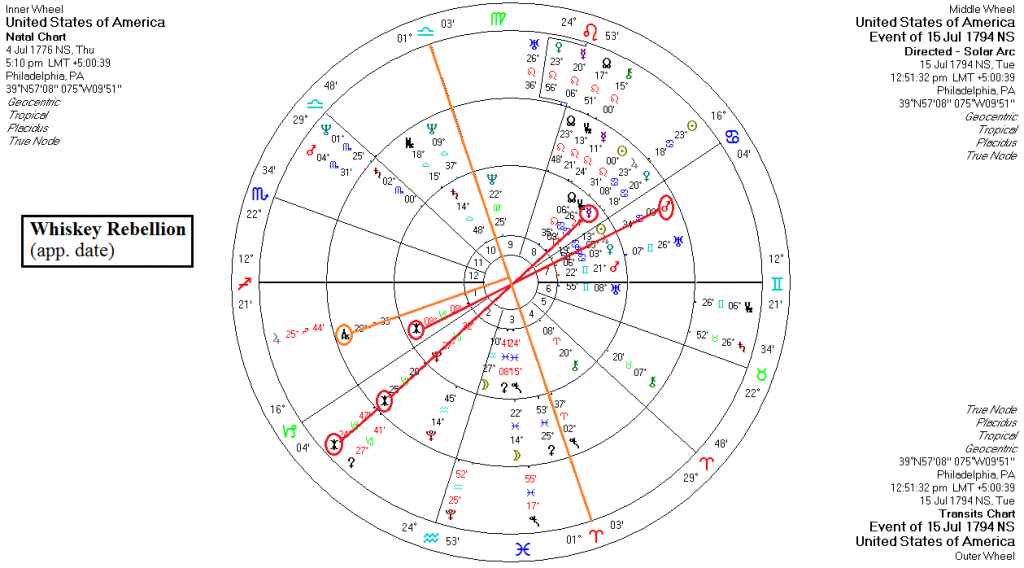 In that chart we see directed Mars opposite Eris, showing the rebellion. We also see transiting Eris opposite Mercury, with directed Eris having just passed its opposition to the US Mercury and on the Antivertex. And then, we see the directed Ascendant about to square the Meridian axis. The Whiskey Rebellion contributed strongly to the creation of political parties in the US, which is represented by the Meridian axis (the sitting government and the opposition – 10th and 4th houses).

Now, what we have is another test of constitutional law, the ideals of the nation, its relations with its partners and the legality of its actions, with Eris transiting square the US Mercury. And next year, there will also be a direction of Pluto to the US Mc. The chart for the 2020 election with transits and directions is below (bigger): 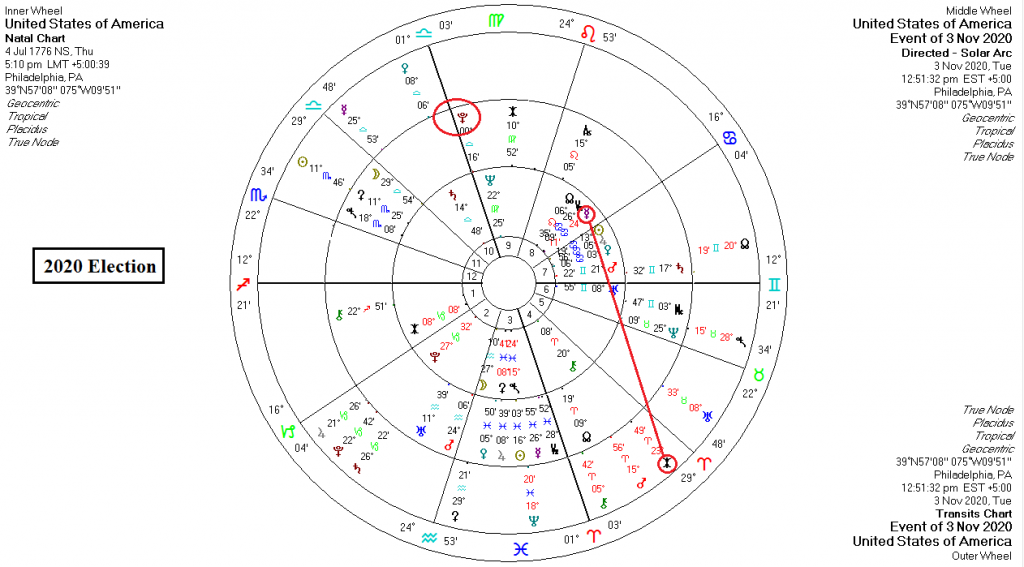 In addition to Eris and Pluto, previously, we will also have Saturn transiting on the Antivertex (a souring of the national mood, or reality hitting home), with transiting Pluto moving up to oppose Mercury – a very potent combination for a dramatic shift in national esteem and policy.

This current transit of Eris to its square of the US Mercury began in 2014. This is when the Crimeans decided they didn’t want to be a part of the Ukraine any longer and went back to ‘Mother Russia’. The rhetoric out of Washington was particularly strident then, as Russia had spoiled the plans for NATO to annex the Russian port at Sevastopol on the Black Sea, denying NATO its naval access to the region. It also put a crimp in any NATO plans for the Sea of Azov.

Mercury rules speech and communications in general. With Eris square Mercury there is always the possibility of divisive speech. This transit comes at a juncture where alliances with the US are strained, where the strident nature of the Trump administration and the Beltway in general is ensuring the rapid realignment of the geopolitical order to favor the East. Eris came within the one degree orb of that square a few months after the Crimean incident. Since then the Cold War v.2.0 has taken hold, largely at Washington’s bidding. But the difference now is that the Europeans are not fully on board with it, and around half of the European states would like to see the sanctions against Russia dropped and relations normalized.

So, what does this transit signify in the bigger picture? And how much of what we are hearing out of Washington is truth, in distinction to a psychological projection or sour grapes at spoiled plans? We currently have an administration that seems intent on pushing everyone’s buttons, stirring up discord, going against established rules and traditions and in general just being careless of consequences in the realm of foreign relations (the latter also being the purview of the 9th house, which Mercury rules in the US chart). It would appear that Washington cannot accept that the world is changing, and not in its favor. Conditions on the ground have changed, harking back to Grant Lewi’s description of the Sun/Saturn square. What we are seeing out of the Beltway is quite symptomatic of declining influence, and in the way a more negative Sun/Saturn type would handle it.

Then, we have elections coming in a year and few months, a president who has painted himself into a corner and a gaggle of Democratic presidential candidates, most of whom do not appear to be up to the job. And even if one of them did happen to win the election, with Pluto on the MC, what can we expect? Trump has said he will not go quietly into the night if he loses. The fact is, most of what passes as foreign policy now is actually based in domestic policy and politics.

With Eris, the golden apple has been thrown into the political matrix of the US and internationally, and we will have to decide who, indeed, is the fairest. The world is deciding about Washington as well. Just as Eris spelled the end of Troy in her mythology, so it is spelling the end of the neo-liberal empire, with Washington as its main face and bastion. Eris is the big geopolitical daimona of the zodiac. We have an opportunity being presented by this transit in these next couple of years in the US, for the people. Let’s hold the thought that it will be a golden opportunity instead of a rotten apple.