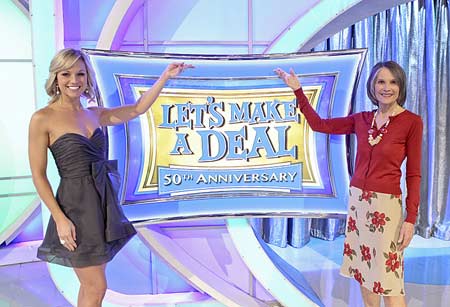 Finally, we get to see it, after all the hype, and besides knowing basically what was in it anyway. On Saturday afternoon, DC time, the Trump/Kushner/Netanyahu ‘Deal of the Century’ for the Palestinians was revealed. The first PDF version was put online at 20:09 UT on the White House site. It is 40 pages long and resembles a brochure advertising for a housing estate. Other commentators have said as much. That will be significant a little later. That is not what is interesting about it, though.

Although there is a time for the posting of the document on the web, it is not of the most significance. The aspects and midpoints describe the chart and its impact well enough. Obviously, if the White House had wanted the plan to succeed, or even get off the ground, they didn’t consult an astrologer. Or maybe they did, and instead of wanting the plan to work, they only wanted to further disrupt the Middle East. If it was the latter, they certainly picked a good chart for stirring up trouble, regardless of the time of day that Saturday it was revealed. Remember the semblance to the housing estate as we go along.

Kidding aside, even without the astrology, the plan will only stiffen resistance to it. Haaretz, one of the most respected newspapers in Israel, had the following headline for the plan, “Trump’s Peace Plan: As Deep as a Beauty Pageant Speech and Twice as Vain.” So actually, what do we see in the astrology, with the mostly ‘meh’ or negative reviews for it? The chart is below (bigger): 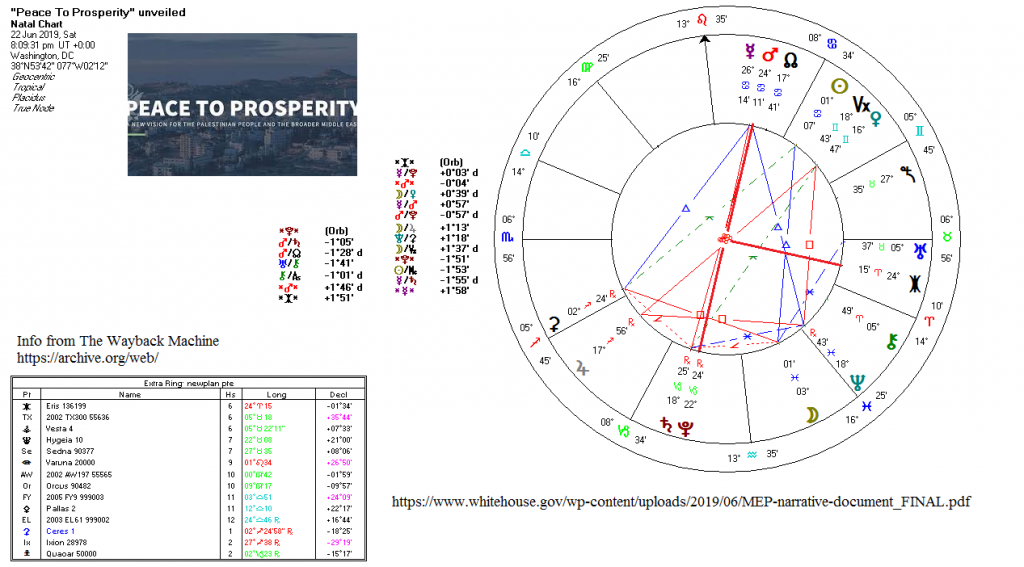 The immediate factors that stand out are the Mars/Eris square – a combative and argumentative aspect if ever there was one – and the Pluto=Mars/Saturn midpoint, the latter being our now-familiar ‘death axis’, this one on steroids. These two factors go along with what was outlined in the Cancer ingress post, speaking of ‘brutal propaganda’. The unveiling did take place the day after the solstice, after all. There is also a Mars=Mercury/Pluto midpoint, adding further spice to the recipe. Essentially, what we have is a t-square, with Eris at the apex and a base opposition consisting of Mercury/Mars/north node on one side and Saturn/Pluto and the south node on the other.

Then, to top the chart off, there is another t-square consisting of Neptune at the apex with a base Venus/Jupiter opposition. That t-square points to falsehood in relationships, incorrect behavior and hopelessness. This is exactly the sort of relationship the Palestinians have faced with Israel since the foundation of the Israeli state.

This plan might seem on the surface to be an initiative solely of the current White House. But in fact, it has been in the works for decades, with the motives there for all to see:

This “deal” is not new at all. It started in 1956 and over the years Israel has contrived to create the conditions for its acceptance. It is exactly what Secretary of State Condoleezza Rice advocated in 2006 when she announced the creation of a “New Middle East”. To support this plan, the US invaded Iraq in 2003; Israel declared war on Hezbollah in 2006 and half of the world gathered – but failed – to change the regime in Syria by means of terrorist proxies. His recent election victory is motivating Netanyahu to take advantage of a totally obedient President in the White House, and push him to endorse his “deal of the Century”. The time is right, from Israel’s point of view, to push through the deal. This Israeli insistence is forcing its neighbours to the opposite conclusion: it is proof to the “Axis of the Resistance” that no solution is possible in the Middle East but through resistance.

We won’t go through the details of the deal here. You can read it at the White House site. This deal has been rolled out on the back of the recent incidents in the Gulf of Oman and Strait of Hormuz. Tensions are already high in the region. The Israelis – at least the hard-liners – are pushing for the US to take military action against Iran. However, Trump’s recent climb-down after the downing of the drone has been a setback for the Israel lobby and Trump’s billionaire backers in the US. This is actually shown in the directions to Israel’s 4:15 chart, below: 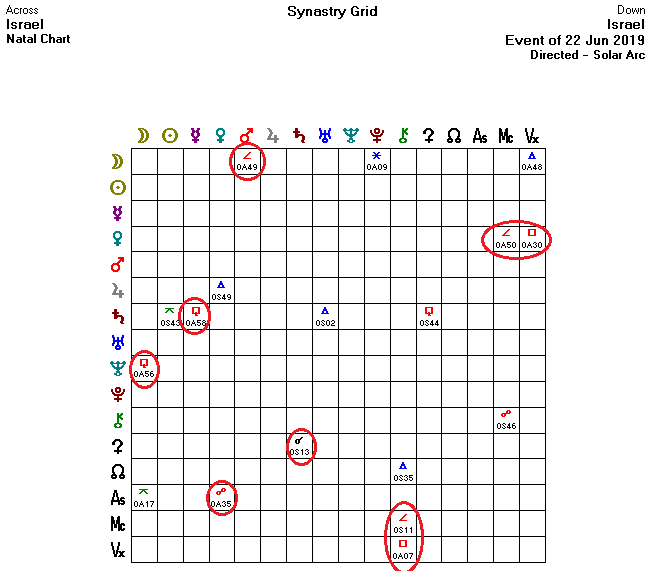 Following on a post a few months back about Israel, the directions that were discussed then are becoming active now. Bibi is being forced to campaign for another election after being unable to form government. He needs some sort of event to rally the public behind him for support. It is looking increasingly less likely that he will get one unless he manufactures something. The elections will be in September. At the time he had to concede, at the end of May, first of June, Neptune began its direction to the Moon, ruling the 10th house (the sitting government). That direction will be exact in June next year, at the height of campaign season in the US. Confusion will reign in Israeli politics throughout the next twelve months. This ‘deal’ will not help Netanyahu.

Jewish groups in the US such as J Street have denounced the deal. The main problem is that it puts economics ahead of politics. With no political solutions to the impasse between the Israelis and Palestinians the current state of affairs will only continue. And with increasing tensions in the Middle East, those solutions look farther and farther away still. Plus, the US has cut funding to the groups that the deal targets. Instead, it is hoped that Israel’s Islamic neighbors will foot the bill and take in the Palestinians. There is little chance for that.

Kushner, the one pushing this deal, made his fortune in real estate, like his father-in-law. The following is quite revealing, when we take the view that the deal was actually meant to cause strife and push the Palestinians into a corner:

“Kushner, whose family foundation has given generously to settler projects, has carefully constructed a strategy designed to win by losing. The “deal” was never intended to work. Rather, its modus operandi is to force Palestinians into a corner from which there is no escape, and where the only answer to the peace deal is “no”. Kushner learned this trick from his days of allegedly acquiring rent-controlled properties, forcing sitting tenants out, refurbishing the flats and then putting them back on the market as luxury properties. The deal that was never intended to be a deal is coming apart, and Kushner is going to have his work cut out holding it together. It is a squeeze play: a combination of withdrawal of services, together with an offer of some financial compensation, nicely wrapped in veiled and not-so-veiled threats, along the lines of “accept this or it only gets worse”

Trump was hoping for a win from this deal. From most sources I have read, the deal is dead before it even starts. The Palestinians want no part of it, calling it a sell-out if they accept it. The Gulf Arab states have cooled in their support for it, meaning little or no investment. Politics in Israel are going pear-shaped. From the astrology of the roll-out it looks like this deal is only throwing gasoline on smoldering coals. At the least, it will only be seen as yet another insult to the Palestinians in their eyes. At its worse, it will serve to inflame passions in the region to uncontrollable levels if even a small event ignites a conflict. Transiting Eris is currently square the US Mercury. Is it any wonder that US foreign policy gaffes and bellicose rhetoric are coming with increasing rapidity now?