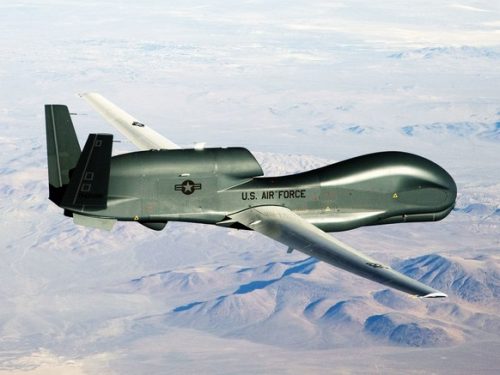 In the pre-dawn hours of 20 June 2019, the Iranians shot down a US surveillance drone they claimed had violated their airspace. The US made the counter-claim that the drone was in international waters and was a strike against a US asset. This turns out to be a rather interesting story with many implications, at the risk of harping on about the Middle East. However, events there could quickly spiral out of control, into a catastrophic conflict. And we came very close to that very thing in those pre-dawn hours.

The chart for the event is below, taken from the time stamps on the photo of the event (bigger): 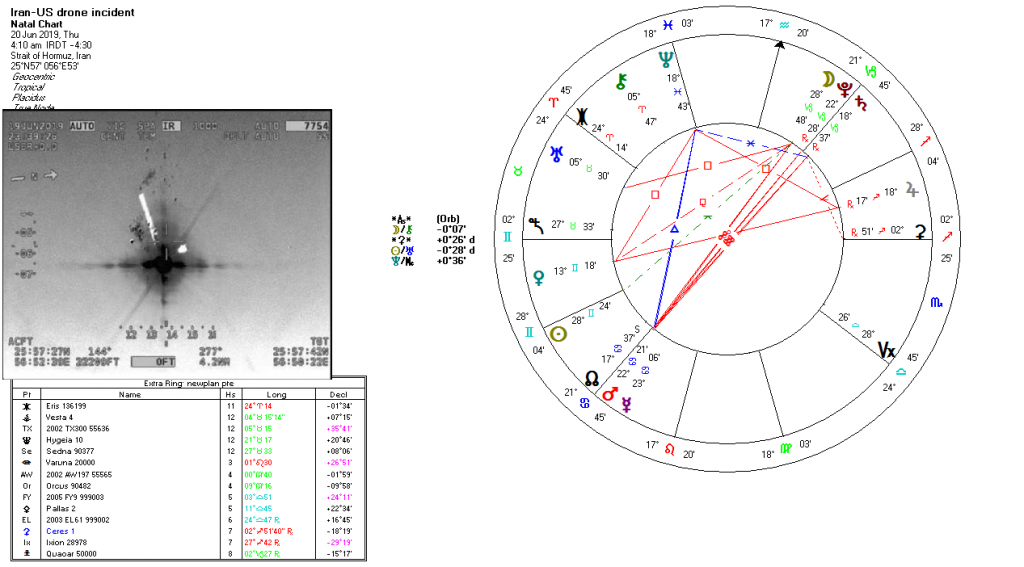 The Sabian symbols for the angles are quite revealing. They are as follows:

The degree for the Ascendant may not seem that revelatory at the moment, but we’ll come back to it. As to who was the main belligerent in this case (the attacker, the Descendant), that is not really important here. But, if the drone was indeed violating Iranian airspace, the US was the belligerent. Aster all, we could say that the US has already committed acts of war against Iran, with the sanctions, the threats to Iran’s security and sovereignty, the documented comments about trying to change the ‘regime’ there and so forth. What is more important in this incident is the symbol – two men playing chess. In this case, we can probably say with certainty that the US is marked by the Descendant. Washington and Tehran have in fact been involved in a kind of geopolitical chess match since the US pulled out of the JCPOA.

As to the MC, there was a secret motive in that drone being there in the first place. It was originally thought to be a type of drone that has not previously been deployed to the region, and it is a very high-tech one at that. It was listed by the US as a MQ-4C Triton, a variant of the Global Hawk. It was deployed to the region only five days ago, which is rather telling. Other sources have since confirmed it was instead a RQ-4 Global Hawk. Either way, it was one of the most high-tech drones in the US arsenal, and represents a serious loss to the US. Aside from the technology inside, if the Iranians are able to salvage any of it, the drone has a price tag upwards of 220 million dollars. That type of drone is used for high altitude broad area maritime surveillance (BAMS).

On the other side, it would have taken a sophisticated missile system to take down such a drone. Those drones typically fly at 60,000 feet. The missile system that took it down was Iranian Khordad 3 system. And then, the claims that the drone was in international waters would appear to be a bit of ‘creative interpretation’ on the part of the US administration. A little calculation from the coordinates on the picture of the event show that the drone was around 8 miles from the coast of Iran – within the 12 mile boundary of Iranian air space. At any rate, in the area where the drone was brought down there are essentially no international waters.

Apparently, as the mainstream press is painting the narrative, Trump had ordered attacks on Iranian facilities that were underway when the incident took place. Everything was in place, the planes were in the air, ready to launch, and then he walked it back, for humanitarian purposes and in true Hollywood style, with ten minutes to spare – just in the nick of time. This was said to be done to ‘avoid civilian casualties’. That is the story, anyway.

At the time of the incident the drone, “had turned off all its identifying equipment in violation of aviation rules and was moving in full secrecy”. Immediately after the drone was downed, the attacks were called off. Drones such as the Global Hawk are used when attacks are underway, when very detailed and accurate information is needed for troop movements on both sides. Without the drone, there was no ‘eye in the sky’, rendering any such attack more difficult and the possibilities for errors markedly increased. This takes us to the symbol for the MC – a man’s secret motives being unmasked.

The take-down of the drone sent a message to Washington, as shown in the Gemini Ascendant. Iran has said it is ready for war, though they don’t want it, and they demonstrated advanced capabilities in air defenses. So, there was a double effect here, if there were attacks underway: no eye in the sky and the fact that any attack on Iranian territory will meet more than adequate defenses. The gloves are off. There are no limits to retaliation if Washington violates Iran’s territory. The US depends on its air cover for any attack.

However, another story emerges from the Iranian side, from an inside source in Tehran. The story is emerging now that Trump is seeking to find a way out of the tensions with Iran with face-saving measures, and yet still keep sanctions on Iran in place throughout his term, thus keeping the appearance that he is fulfilling his campaign promises and promises to his donors – and to the Saudis and Israelis. The story now appears like this:

“Iran was informed in advance by a third party of a proposal by US intelligence that Iran selects one or two or three empty locations for the US to bomb. This was intended to make everyone happy by saving face for all concerned. Iran refused to play along with this charade, which was ultimately designed to save face for Trump. Nonetheless, Iran was reassured by this offer that the US has no intention of going to war and is trying to find a way out of its quandary; Trump is looking for a way out. Iran also does not want war, but neither will it accept the continued embargo of its oil exports. As long as Iran is blocked from selling its oil, Iran and Trump will continue their danse macabre on the edge of the abyss.”

Iran has no interest in helping Trump save face, nor in having any part of its territory bombed. It would make them look weak, too. If we look at the remainder of the chart we see the opposition between Mars and the Saturn/Pluto conjunction, pointing to power plays but also to poor decisions and missteps. For their part, the Iranians know that Trump has painted himself into a corner. All they need to do is keep the pressure on and wait him out. It was a blunder to turn off the drone transponder and fly it into Iranian airspace.

So, who do you believe? We might have our suspicions. Whoever is right, the mask is off of any intentions in the Gulf. The Iranians have demonstrated that they will not be a walk in the park if they are attacked. And they have further demonstrated their red lines. Trump quickly walked back his rhetoric after the shoot-down and after quick meetings with defense officials. He wants to avoid a war if at all possible, having just announced his bid for reelection a week earlier. And he gave himself wiggle room with his face-saving story, further claiming that the incident was probably a ‘mistake’ on the part of the Iranians.

As to the Garden of the Tuileries symbol, Dane Rudhyar spoke of this symbol in terms of crystallization: “formalism and often the narrow intellectual crystallization of dualistic concepts” as well as “ego-centralization and the worship of formalism.” The US was formally warned with this incident. It was a wake-up for any sense of ego with regard to how easy it will be to pull Iran into line. And then, there is the midpoint ASC=Nep/MC, from Ebertin: “The inclination to live in a world of illusion and unreality, acting and pretending. – Taking the wrong path in life, the pursuit of wrong objectives, uncertainty or insecurity.”

Finally, there was the symbol for the IC, representing the region, “a chemist conducting an experiment for his students.” Classroom experiments normally have a predictable outcome. The outcome from this little ‘experiment’ was also predictable. The Iranians have a trump card (pun intended) in the Middle East, in the Strait of Hormuz. It is their front yard. They control it. No other nation on the Gulf has the capacity to do so. Any military ‘experiments’ there now will have firm and certain results.

Iran is practicing maximum pressure on the Trump administration, as the US is doing with Iran. There were also attacks by the Houthis on Saudi targets yesterday, too – a water desalination plant and the Jizan airport. That has really shaken the Saudis. They rely on desalination for their drinking water. The Houthis are getting advanced weaponry from somewhere. And after all that the price of oil jumped 6% yesterday. So, there are messages being sent all around. Now, it is true that the oil price is still not up to what it was in April, but that can change rapidly if things escalate further.

Then, if we look at the position of Ceres, on the Descendant, we note that this event marked a turning point for the aggressor. Any more such ‘missteps’ will be met with swift and firm response. The Iranians have nothing to lose so long as they hold the high moral ground. It is doubtful we will see any more attempts or talk of such about an attack on Iran, but the propaganda will become even more heated. Congress is already making noises about the War Powers Act to override the administration, as they should.

And as for assurances there will not be a war, Iran has set up a situation room and coordinated with all of its allies in the region (from the previous link). Iran and its allies are at peak alert, and have planned their targets to hit should a war begin, which they figure would go on for many months. The Middle East would be set on fire, literally. Iran would not bomb tankers, as many pundits have surmised, but instead would hit all of the oil producing plants of the US allies in the region, shutting down the world’s oil supply to a large extent. No oil would flow out of the Middle East. Russia would benefit greatly, as would Venezuela if they could get out of their mess. This is quite aside from Trump seeking to cinch his reelection with a ‘win’ about Iran. If Trump has his way there will be no war.

The US needs to rethink its alliances in the Middle East. Trump needs to move his hawkish defense strategists on. Don’t look for war. Meditate for peace. It is going to be an interesting summer.