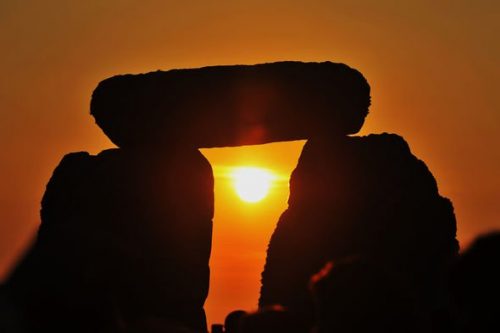 The June solstice takes place on 21 June 19 at 3:54 UT. This will be the summer solstice for the northern hemisphere and winter for the southern hemisphere. I do not normally do posts for ingress figures, but this northern summer looks to be out of the ordinary for reasons we will get to. There are also two eclipses this three-month period which we will also cover in this post.

The figure for the solar ingress to Cancer is below (bigger): 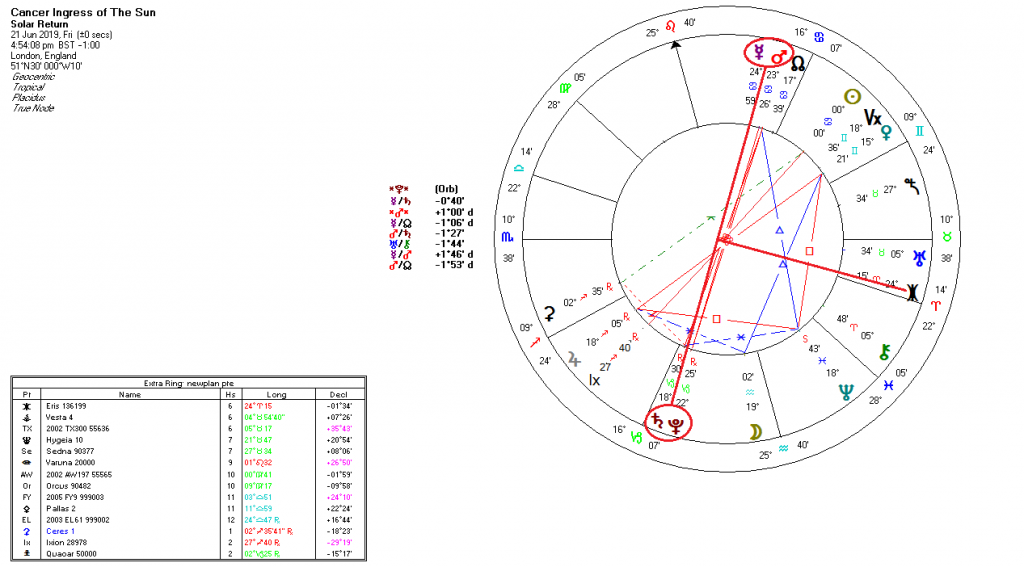 If there is one way to describe what is coming for this season, it would likely be described as “brutal propaganda”. To start, we find the Sun opposite the malcontent, Ixion. Ixion is the planet that sits at the dividing line between madness and genius. But given what we are seeing in the news, madness seems to be more to the forefront these days, at least what we see coming from the Western press. Ixion is more purgatorial in its action than violent, even though his mythology is violent, in the vein one would read in Dante’s purgatory in his Divine Comedy.

The next feature in the chart that stands out is the t-square formed by the base opposition between Mercury/Mars and Saturn/Pluto, with Eris at the apex. Mercury points to the propagandist/rhetorical part of this figure, with  Mars  making it more strident, while the main purpose of Eris is to sow discord among erstwhile allied parties. Therein lies a clue at what will be afoot through this period. This could be a very violent, catastrophic combination, but it is moderated by a sextile and trine by Neptune. That Neptunian influence points to the deceptive, propagandist nature of this chart, with the various parties and factions seeking to ‘move hearts and minds’, especially as the sextile and trine are between Mars and Saturn. And this brings up the biggest warning in the chart.

The opposition between Mars and Saturn also forms a midpoint structure with Pluto. The base opposition is the ‘death axis’, and with Pluto there we see the potential for brutality and disasters, which we might expect if there were significant eclipses being activated through this period. Such would be eclipses to Aries points or the 15th degrees of the fixed signs – Taurus, Leo, Scorpio and Aquarius. There was one such on 7 Aug 17 (15 Leo) and another on 20 Mar 2015 (0 Aries), but the latter is pretty much a ‘dead’ eclipse. It won’t be activated by anything this season anyway. The former eclipse will be activated by Mars on the median date of 25 July, followed by the Sun on 7/8 August. If we are going to see any major violence or disasters this season then we can probably expect to see it starting in the 2nd half of July and the first part of August.

We want to note quickly that Mars began to come within orb of its opposition to the Saturn/Pluto conjunction toward the middle of June. If you have been experiencing little ‘disasters’ in your own life, have been feeling cross yourself or somehow that the world is out to get you or have experienced really cross people, then you likely have that opposition across one of your angles or on a planet in your chart.

As to the world, why I say this season will be about ‘brutal propaganda’ is due to the latest Bilderberg meeting, described in the Gemini letter, where they laid out their agenda for this year – Russia, China, Europe, social media as a weapon, cyber security and the ethics of AI. This is not to say that they made plans for those topics (there were more), but they are certainly on the agenda of the Western powers. So, what have we seen since that meeting at the first of June?

And so forth. There may be a grain of truth in some of the ‘news’ pieces, but be quite aware of the propaganda value and the real agenda behind them. This is not to paint the targets of those pieces and events as entirely wholesome. There are no perfect societies, but in many cases the nations whose news services put those pieces out are guilty of many of the same practices about which they accuse others. We cannot go into all that here.

And then, be aware that there are factions in Washington who really do want to see wars with Russia, China and Iran. We have touched on this in the last two posts. As the Shanghai Cooperation Organisation consolidates and becomes increasingly a viable concern, able to resist the incursions of the West in to Central and East Asia, such rhetoric and propaganda will sharply increase, warning us of ‘imminent war’, parroted across the internet and keeping people off-balance and afraid or worked up to embrace such a conflict. Such conflicts would indeed be madness, though. Then, there are two eclipses.

The first eclipse for this season is on the new moon, a total solar eclipse that will trace a path across the South Pacific and South America. It will be visible across much of South America in varying degrees. The eclipse degree is the 11th degree of Cancer. The Sabian symbol for that degree is as follows:

This degree also points to the skepticism we should apply to all news feeds this season, and always, really, and instead use our common sense, not getting hooked by the emotional content. The latter will be quite strong this season. That chart is below (bigger): 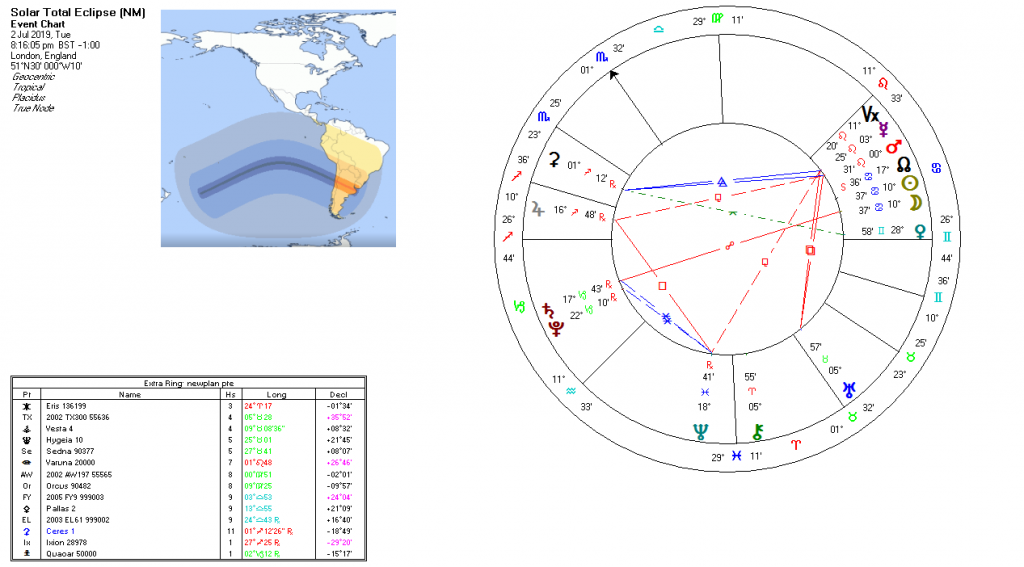 The culmination line (below) for this eclipse will pass through the central west of the US and Canada and along the west coast of Mexico, intersecting with the Sun/Moon line in a recent zone of earthquake activity in Mexico, near the tip of the Baha Peninsula. It will be activated by Mars early next year. 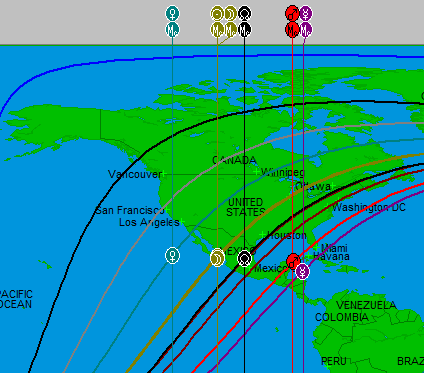 We need to be aware of the nations that are affected by this eclipse. The United States has it on the US Sun, which will serve to increase the belligerence coming out of Washington. There may also be seismic activity near the culmination line, and there is an area of fracking in the American southwest that takes place along that line. The eclipse also falls on the Sun/MC conjunction in Canada’s chart.

Solar eclipses to the Sun can indicate the fall of leaders, and indicate issues with leadership in general. So, we watch to see what happens with AMLO, Trump and Trudeau as a result of this eclipse. The same applies to other nations who have their Sun and/or Midheaven activated. There may also be a change in the Canadian government when Mars activates that eclipse. The other nations affected by the 2 July eclipse are the UK (MC), Venezuela (Sun), Mexico, (Mars), New Zealand (Uranus), Australia (Sun), Turkey (Asc/Pluto), Lebanon (Sun), and the Ukraine (Uranus).

The next eclipse is on the full moon of Cancer. The chart is below (bigger). It will be visible from Australia to South America, and from South Africa to Finland. This will be the eclipse to watch, especially for changes in the Middle East. That will become more important toward the end of this year/first part of next year, when it will be fully activated in turn by Saturn, Pluto, Jupiter and Mars. 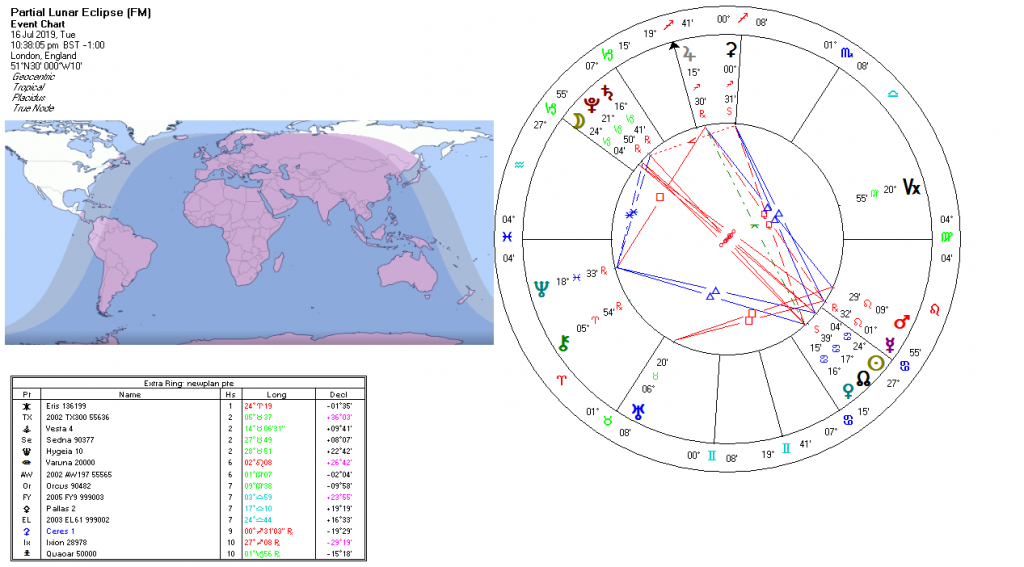 It is a partial lunar eclipse, but the Moon culmination line (below) runs right through the Levant and East Africa. The Mars line for that eclipse intersects the culmination line at the base of the horn of Africa in relation to the West, where there is currently quite a bit of unrest. 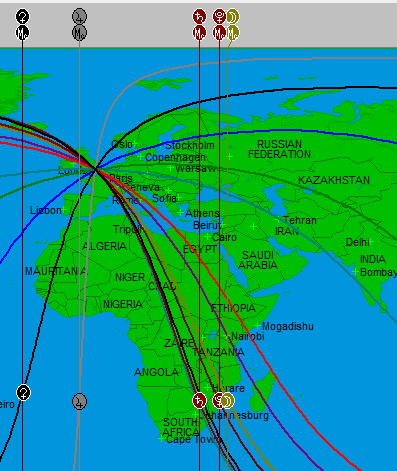 We will leave things here, as I will cover this latter eclipse at the next full moon letter. Suffice it to say, the end of this year and the start of next year we will be ‘living in interesting times’. So buckle up, stay aware, stay alert and prepared for some outrageous propaganda and obvious lies. And most of all, stay calm and hold the mind’s eye on peace for our world. I don’t expect a war, but there are some crazy people in power now in Washington, London and the Middle East, and I don’t necessarily mean the visible leaders. So, we leave this piece with the Sabian symbol for the solar degree of the last eclipse of this season:

24 – 25 Cancer: A willful man is overshadowed by a descent of superior power.

Something to ponder on there. Stay well.