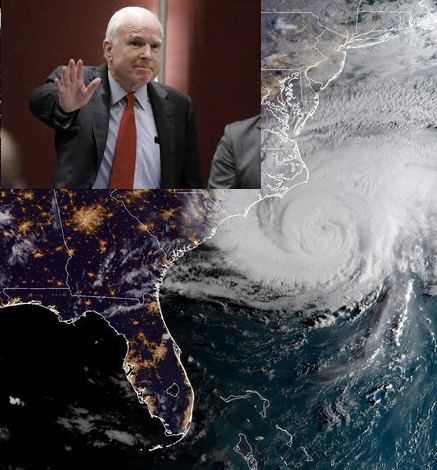 The title of this article might seem a little misleading at first or even off-putting, but given recent events, they call to mind a particular element in astrology that bears consideration. More on that in a moment. The death of the American Senator from Arizona, John McCain, was a major news event, marking in many ways the end of an era – hopefully the beginning of the end of a more warlike era for the United States. But, his replacement will duly be found. And the storm called Florence that recently ravaged the Carolinas reminds us of another era, that of climate change and the changes that is bringing. The rivers in the eastern parts of those states have only now just peaked as of this writing, with estimates of damage marking this as possibly the 7th-most damaging storm in US history, with all of those costliest storms having come since 2005. Forty-two people so far lost their lives to Florence. I had family members in the path of Florence, but they are all alive and well, thank goodness. But that brings us to the main topic of this article, and Florence gave me pause to stop and think about it.

In cosmobiology there is a midpoint axis that has at times been called the ‘death axis’. It is defined by the midpoint of Mars and Saturn, which also pertains to the points squared, opposed, semisquared and sesquisquared to the main midpoint. So, when we say that a planet is on that axis, we mean on one of the aforementioned points. It is activated by directions (solar arc) and by transits to those points just described. From The Combination of Stellar Influences (Ebertin, 1972):

“One is inclined at times to consider Mars/Saturn as the “death axis”. It is true that this combination is found in many cases at the time of death. One should not however make the mistake of taking it for granted that death will be the result for during the course of life this “death axis” is very often stimulated by transits and directions but life continues just the same. Such periods are often marked by difficulties and illness, difficulties to be overcome, or the death of other people. It should also be taken into consideration in these days that life is often prolonged through medical science or new medical equipment through which many people near death are kept alive.” (p. 252)

Given the fact that the two ‘malefics’ are the significators of this axis, its results are not difficult to surmise. Nations as well as people have that axis, and any time it is activated, depending on the planetary emphasis to it as stated, something to do with either death or illness will evidence itself in that person’s or nation’s life, either directly or through a relationship. In the case of a nation, that midpoint axis could be called a ‘war axis’ or a ‘disaster axis’. Using the US as an example, the Mars/Saturn midpoints lie at 3° of cardinal signs and 18° of fixed signs. We have just seen this axis in action with Hurricane Florence. At the time Florence made landfall in the Carolinas, Saturn was on the cardinal axis point at almost 3° of Capricorn, having just gone direct, and Jupiter was just past the Scorpio point, marking the dumping of copious amounts of water on the Carolinas, Scorpio being a water sign, and also associated with death on its own. Other such examples are Hurricane Hugo, Hurricane Hazel, Hurricane Fran, etc. However, the ‘death axis’ also applies to warfare that the US instigates, or in which it suffers heavy casualties, indicated by the commencement of those activities, a point to be kept in mind when tracking military saber-rattling for any nation.

The Mexican American War, the Civil War, (more charts to follow later) the Vietnam War, 9/11, Pearl Harbor and many other such events for the US all took place when the American ‘death axis’ was activated, either by transits from planets or by solar arc. There have also been several US presidents, most notably Obama and “W” Bush in recent memory, who played into that axis. That axis for “W” is that same as that for the US. His father (George H.W. Bush) has his Neptune is on the US axis as well. Obama’s ascendant was on that axis. Trump has no direct contacts to the US axis, although his Mars/Pluto midpoint does. The Mars/Pluto axis marks, among other things, “+ The attainment of success through excessive effort, or negatively, “The tendency to proceed in a brutal manner, the misfortune of having to suffer violent assaults, injuries.” Read into that what you like.

Trump has stated that he wants to scale back US military involvement overseas, but he is continually coopted from doing so by the demands of domestic politics and the Washington establishment. As an example, he ordered US and allied missile strikes on Syria on the 14th of April this year, but there were no casualties to speak of and no real damage to Syria. There was also nothing aspecting the US death axis by transit or direction at the time. However, Saturn will be on that point until the middle of October for a one degree orb, and Mars will contact it at the end of that month, so we will have to wait and see. It is also of interest to note that Donald Trump’s Saturn just made a solar arc to that point, with Venus having done so two years ago. We will see how many casualties his trade wars cause, or if it brings harm to him personally. There is quite a lot we could read into those solar arcs. But what about John McCain, as the title of this piece alludes?

John McCain has just lost his final battle with brain cancer. He was one the most outspoken hawks in Washington, an advocate for the defense industry. His Mercury just happened to be on the US Mars/Saturn axis, and he talked about death quite bit – in other countries. One of his more memorable performances was his rendition of “Bomb, bomb, bomb, bomb, bomb Iran”, to the Beach Boys tune. His funeral was a true spectacle and highly politicized. One could not have asked for more jingoism, flag-waving patriotism than what we saw there. The media painted him as a great patriot and American hero. To much of the rest of the world, he was a war criminal. But, what of his death axis? His was at 1°20 of mutable signs and at 16°20 of cardinal signs. In January of this year his directed meridian axis was exactly on his death axis, keeping in mind the meridian axis includes the nadir (conditions at the end of life). His directed Jupiter was on his ascendant and square his meridian axis. He had been diagnosed with a glioblastoma in July of 2017, a very aggressive form of brain tumor. It finally took his life on 24 Aug 18. The solar arc of his meridian to his death axis had been active since January of 2017. In that time there was a direction of Neptune to his horizon. Mars and Jupiter had both transited over the Mars/Saturn midpoint at the end of April in 2017, probably marking the beginning of the cancer, with Mars transiting opposite the directed Neptune about a week after. There was an eclipse near his ascendant in Feb of ‘17 and another in Sept. of ‘16. And, the clincher was the solar arc of Saturn to his nadir in the year leading to his death, in addition to a solar arc by Mercury to his Venus, the former ruling his nadir and the latter ruling his 8th house. And to top it all off, the transiting Sun was on his death axis on the day of his death. There are other points, too, but these will suffice. The chart is below (see bigger): 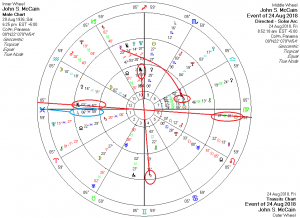 There are several points we can take away from this discussion. The Mars/Saturn axis is an important consideration in medical astrology and can be a particularly important marker in the diagnosis of illness and even the timing of death. I have seen this in action for friends and clients, but one must be careful to take every other factor into account. There is also an ‘illness axis’, defined by the Saturn/Neptune midpoint (p. 254, CSI). As is normally the case, the nature of the transiting or directed planets will define the nature of the event. The Mars/Saturn midpoint can also indicate the timing of poor decisions being taken, usually under the influence of hubris, overconfidence or under other influences. This would be in the nature of, “Hold my beer and watch this…,” if one is inclined to such poor thinking in the first place. This often applies more to men than women, which is also not surprising given that both Mars and Saturn are considered to be masculine in nature. Poor thinking is gender-equal, however, although men are more inclined to take physical risks than women. Thus, this death axis could also be called the ‘risk axis’. The ‘death axis’ does not depend upon Mars and Saturn being in aspect to each other, either. However, its action will be intensified if such an aspect does occur. Lastly, in the case of nations it can be an indicator of militarism, disasters and the like. Overall, it is a midpoint structure that bears careful examination in a chart, and should be checked in forecasting for pending directions and transits.