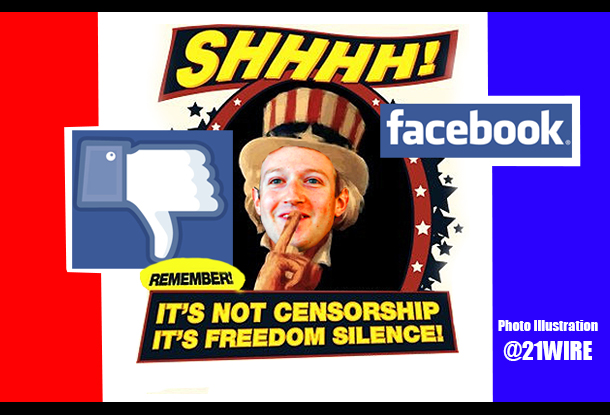 Some months back I wrote an article about Facebook and the Cambridge Analytica scandal. Since that time we have learned that there has been increasing censorship on that site, of anything that contradicts establishment narratives in the countries hosting the site, especially anything that contradicts US/European establishment narratives. But don’t worry. Rest assured that you will get nothing but the most accurate, up-to-date, unbiased reporting of any news via social media. Big Brother is seeing to it that all the fake news is removed from view and that your world view will be suitably insulated from the nasties that seek to usurp democracy and return us to the bad old days of eternal conflict, demagoguery and totalitarianism. Right. From a recent post in Moon of Alabama (required reading, even if it is a ‘fake news’ site):

“In consequence of the alleged manipulation of new and opinions during the 2016 election, Congress threatened to regulate social media. It demanded testimony by the owners of social media companies – Facebook, Twitter and Google – about their plans to weed out so called “fake news” distributed through their systems. Instead of defending the freedom of individuals and organizations to publish opinions deviating from the mainstream, the companies promised to increase their censorship capabilities. To avoid to make judgments themselves, they decided to outsource these to ‘independent’ fact checking organizations. Anything those deem “fake news” will then be censored. Facebook Inc just gave such powers to two well known U.S. government regime change operators. These will now have the capabilities to censor content in foreign countries…”

All three of the aforementioned companies – Facebook, Twitter and Google – have strong astrological connections with the US chart, noting especially the connections to the outer planets and Neptune in particular (see linked charts). They are thus very sensitive to public and government pressure. In its current manifestation, the Facebook move toward censorship (See chart below, or bigger) is marked by a Saturn transit on 19 Sept. exactly on the directed Facebook Midheaven, the latter making a solar arc to the nodal axis, marking the change towards its users in a more restrictive direction. It also marked a poor decision and a change of direction. This was preceded 6 – 8 months ago by directions of Neptune to the FB Venus and Saturn to the FB Moon, thus marking the betrayal and exposure of the same to its users. So, from the preceding points we see that these companies are open to manipulation and censorship. They cannot afford to resist the government on these initiatives, lest they suffer significant consequences. Or can they?…That depends on us, on becoming aware of what is taking place. 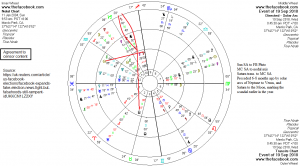 The chief organ of censorship is to be an organization that is well known throughout the world for its promotion of democratic principles and friendly relations with the US – the National Endowment for Democracy (NED). This organization took up the work of the CIA after the nefarious goings-on in that organization were broken in a scandal preceding the Reagan years. So effectively the NED did their work, in fact, that the Russians finally had enough of them and kicked them out of Russia. The two sister organizations who will help keep the tech companies on the straight and narrow are the International Republican Institute (IRI) and the National Democratic Institute (NDI). The IRI has an affiliate organization in Europe, called the European People’s Party (EPP), centered around Christian Democrats in Europe. If you are interested, “The EEP has been the largest party in the European Parliament since 1999 and in the European Council since 2002. It is also by far the largest party in the current European Commission.” (see EEP link). Censorship and election meddling is alive and well in Europe, too, and Russia has little to do with it.

The NDI, for its part, did its work so well in Cambodia that the Cambodians decided they were no longer needed there and asked them to leave. Of course, Cambodia is not known as a bastion of democracy. These two organizations, along with the NED – Big Brother and his sisters – are now tasked with keeping social media worldwide free of the purveyors of fake news. And they have already taken up their task with relish. They are aided in the US by the likes of the Associated Press, Politifact, Snopes and FactCheck.org. If you would like to see where your nation’s fact checkers are, see here.

The NED and its spinoff organizations have been very busy over the past 30+ years, helping regimes worldwide come around to democratic ideals, helping out with popular rebellions when the regimes do not understand what the people really want, and installing organizations after the fact that help the populace grow into productive members of the world society. And to help things along, they will sanction nations until they scream, “Uncle!” until they do as we say they should But it is only for their own good…(he said with tongue in cheek). Seriously, though, what the CIA used to do covertly (and still do), the NED and its offspring now do openly, and quite colorfully. It would appear that they are also attempting to do so in the US with a certain wayward President, with the help of the mainstream media. But all that is not the main point here.

Facebook and Twitter are two of the largest social media platforms on the planet. And many people rely on them for their daily news. Google is the most widely used search engine. And we have not even touched on how data is stored and used. All that information is there. Stored. Forever. You might think you can delete it, but good luck with that. The moment it goes online, it is stored in a server somewhere. And our governments keep it safe for us. There are alternatives to the main culprits who are now censoring our content, though. For search engines, you can look here, here and here for starters. And then there is always Yandex, if you really want to thumb your nose. And for social media alternatives, you can check here and here for starters. One big thing to keep in mind is that the big three – Google, Twitter and Facebook – are companies and they rely on sales. The fact that they have chosen to censor data is a bad one and will come back to haunt them eventually. The more people find out about what they are doing, the more Google and Co. will lose market share. We, the consumers, have choices. And the younger generations are turning away from Facebook anyway, for instance. (It’s not cool. Old people use Facebook.) But on top of that, the fact they are being pressured to censor is a good sign in a way, because it means that people are becoming aware of what is going on, and the establishment is worried about losing their market share. It’s something to keep in mind. Read widely. Seek diverse points of view. Most of all, stay independent. If we want freedom of information, we have to demand it. Freedom is a state of mind, not the mind of the state.