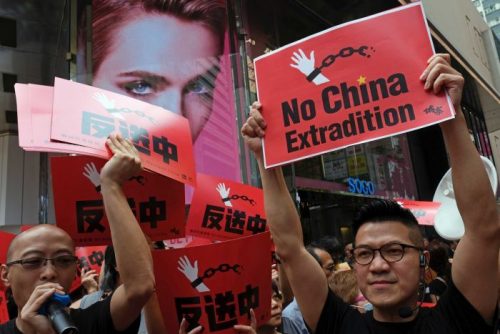 Given the unrest in Hong Kong, which is ongoing, and past attempts to destabilize China, along with the current trade war which shows no signs of abating, there is plenty to examine with the pressures on China, internal and otherwise. Continuing on from the first article on China, we move now to our present circumstances, with the focus the West is placing on that nation, especially Washington. With the G20 nations just finished, it will be helpful to look at China’s astrology now to see what might eventuate, and also where relations are headed.

The current tensions in Hong Kong relate to a proposed extradition bill, since withdrawn, proposed by the governor of Hong Kong, Carrie Lam. The protests broke out on 31 March this year. To understand what is taking place there it is necessary to know a bit of Hong Kong’s history.

Hong Kong was wrested from mainland China (Qing Dynasty) with the signing of the Treaty of Nanking at the end of the 1st Opium War. After the 2nd Opium War, Hong Kong was secured by the British with a 99 year lease in 1898, after it had also taken Kowloon from the Chinese. It was occupied by the Japanese in WWII, then taken back by the British and Chinese at the end of the war, with the lease continuing. After the war it became a major industrial and financial hub. In 1984, Thatcher signed the joint Sino-British Declaration leading to a large emigration from Hong Kong. And then in 1997, the British reluctantly handed Hong Kong back to the mainland (chart), with Hong Kong adopting the Hong Kong Basic Law and becoming an autonomous region (chart), a.k.a. a special administrative region.

It is central to keep in mind that Hong Kong has been a bastion of the West and neo-liberal capitalism since its handover, and before. Gradually, though, the mainland Chinese have been moving there, displacing the Western-leaning Chinese over time, with the government gradually assuming a pro PRC stance, which is where we are today. The West had hoped to retain its influence there, but that is increasingly eroding as the years pass. And eventually Hong Kong will be fully returned to the PRC, not an autonomous region. It is probably hardly autonomous today. This is at the root of the protests there in recent years. This bears a little explanation.

Hong Kong is said to be solely responsible for its own internal affairs and external relations. China is responsible for its defense and foreign relations. Hong Kong’s major trading partners are all Western except for mainland China and Japan. Its relations are largely economic, and it has active relations with the WTO and APEC. And this is where things begin to get a little murky and troublesome. Since it has such strong connections with Western powers, Western NGOs are quite active in Hong Kong, whereas they are largely banned on the mainland. The NED is quite active in Hong Kong, for instance.

Xi Jinping announced his massive BRI project in 2013. Hong Kong is to be a central hub in that initiative, and an integral part of it. Since the announcement of the BRI there have been massive protests in Hong Kong, one such being the ‘Umbrella Revolution’ of 2014. They are not stated to be against the BRI. Instead, they are cast as demonstrations for ‘democracy’, ‘human rights’ and ‘fundamental freedoms’. The NED has its fingerprints all over the current protests.

Ever since Xi introduced the BRI and began to pick up steam the West has ratcheted up the rhetoric about China. But it goes back further, really to Deng Xiaoping, with his ‘socialism with Chinese characteristics’. The Chinese economic miracle has indeed been astounding, but China refuses to play strictly by Western WTO rules. That is one of the reasons for their success. The neo-liberal capitalists have been trying to pull China into line since the beginning of their efforts, without any real success. China just keeps on going, and even though its growth has slowed in recent years, they are still outperforming the West in GDP growth.

China’s GDP growth rate is still at a robust 6.4%, even with the trade war on. It has dipped slightly since tariffs were introduced, but it is still more than double the growth rate of the US, at 3.1%. And that is far better still than the Euro-bloc’s rate of a stagnant 1.3%. The TPP was supposed to try to hedge China in, but since it has been dismantled by Trump, and since the growth of the China-Russia cooperation agreements there seems to be little stopping the BRI and China’s rapid integration with the world. It is globalism, but with Chinese/Russian characteristics. And that leaves us with Hong Kong.

The CIA, via the American NGOs, used Hong Kong as a listening post to the mainland. If the Western neo-liberal system is unable to stop the march of the BRI, the China-Russian model will soon surpass the Western powers as the leading economic model in the world, with power being transferred to the East. What we are probably seeing in Hong Kong now with these protests is yet another attempt to set China back in its progress, much as we have seen in the past five years. Hong Kong’s distance from the mainland, both in distance and in policy has been important to Washington and London as a hedge against communism in the region and in keeping tabs on the mainland.

China and Russia, along with the future of our current form of capitalism, all featured on the recent Bilderberg agenda, that yearly meeting being the premier Atlanticist forum, at the beginning of June. Since then, ‘hit pieces’ against China began to appear more pronouncedly in the Western press – stories again highlighting the Uighurs in Xinjiang, China’s prison system, human rights record and so forth. And then, these current protests pop up. They may or may not be connected to the Atlanticist agenda. The reader can decide. But when it comes down to realities and propaganda, these protests are a storm in a teacup, used as propaganda pieces for the West. From a previous link:

“It’s unfortunate there’s been all this hullabaloo over what is a fairly routine and reasonable adjustment to the law. As the law reads right now, there’s no legal way to prevent criminals in other parts of China from escaping charges by fleeing to Hong Kong. It would be like Louisiana — which, you’ll remember, has a unique justice system — refusing to send fugitives to Texas or California for crimes committed in those states…Honestly, this is something that should have been part of the agreement made in advance of the 1997 handover. Back then bad actors used irrational fear of the mainland to kick the can down the road and we’re seeing the consequences today.”

There is the sense that these protests are seizing on an perceived, albeit erroneous opportunity, that China is in a weakened position because of the US administration’s trade war. Instead, that trade war has stiffened the Chinese public against the US. If you notice the media coverage, many of the protest signs you see are in English, not Cantonese, and these seem to be aimed at Western audiences. The corporate press portrays them as being about freedom of expression, human rights and so forth – typical of the kind of thing we would hear from the NED. But as soon as the protests got large and loud enough the Hong Kong governor tabled the proposed law. It’s not like the government does not listen to the people. Yet, the protests continue.

But there is another side to the protests. The law was aimed at extraditing criminals. Those would be white-collar/financial criminals in the case of Hong Kong, as “the island’s primary economic function is to serve as an England-dictated tax haven. This explains why “exposed” tycoons are now rushing their wealth out of Hong Kong.” Western corporate media routinely sides with the protesters. It is not hard to imagine why. So, is China weaker now? Are the protests going to spread and possibly make a dent in China’s policies this time? China’s chart with transits and directions is below (bigger): 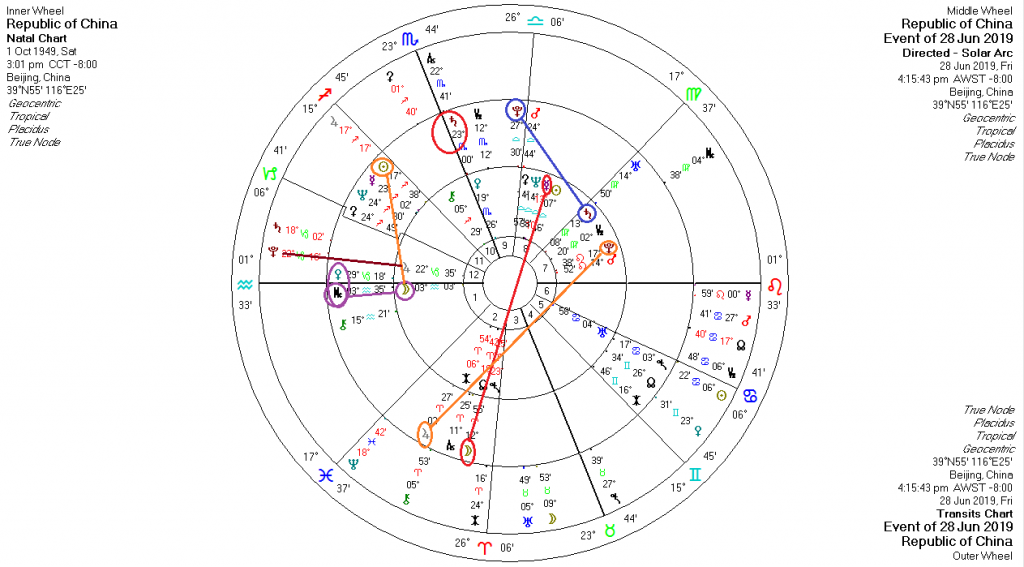 The immediate factor that stands out is the direction of Saturn to the Chinese MC. It shows the stresses the government is currently experiencing and the serious nature of what is being presented. Adjustments will have to be made. But that is about it for anything of a concerning nature. The rest of the chart says something quite different. We see the midpoint structure formed by the directed MC and Venus to the Chinese Ascendant, indicating the increasingly favorable and amiable relations with both India and Russia. The direction of Venus will be exact in a couple of years. Those good relations are further reflected by Jupiter’s direction to China’s Pluto, ruler of the 10th house. So, although the times are serious, China is not in particularly dire straits. China plays the long game and has many more cards to play before it caves in to Trump’s trade war, which is looking less and less likely. In point of fact, Trump has indicated there is a deal whereby China will buy tens of billions in US farm goods. We wonder what was promised in return. He is clearly in campaign mode, seeking to bolster his voter base. Trump will cave before China does.

There will be a dampening of the mood in China when the Saturn/Pluto conjunction takes place early next year, but transits pass, and with everything else indicated, there will not be any other significant troubles. It does take place in the 12th house, though, which could see some further subversive elements at work. If we step back and look at the SCO agreement and the progress China is making in its diplomatic efforts, there again, it’s a fly in the ointment, but not a big deal. Jupiter rules China’s 11th house of alliances. There may be strains there. Jupiter also rules financial expansion, being one of the ‘money planets’. The sense is the trade war will get worse before it gets better. But even now, with the other positive directions indicated previously, there has been at least a brief reprieve from further sanctions, from either side.

The current protests as well as China’s financial strains are shown by the aforementioned Saturn direction and the lunar direction opposite Mercury, with the latter ruling China’s 8th (international banking, taxes and tariffs) and 5th (ambassadors, credit and the stock market) houses. And finally, there are the directions of the Sun and MC to China’s moon, again showing the good fortune that is coming from its expanding foreign relations and many nations’ enthusiasm for the BRI. In all, what this chart shows is a passing phase, not a shift in government.

China will weather these protests and move on, as they did in 2014 and again a couple of years later. In the interim, we can expect the hue and cry from the corporate press about ‘China’s malign behavior’ to continue. But the fact is, the rhetoric is really about the West’s fear of losing influence.