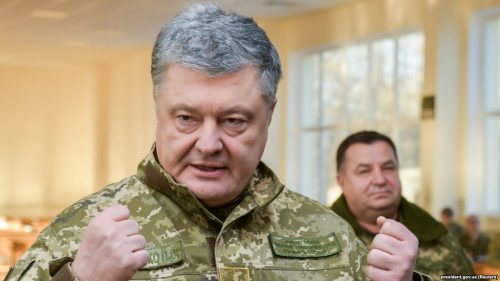 Following on from the previous post it would probably be useful to look at Ukraine in  more detail, given what is taking place there, and what we might expect there in the near future. There are also the issues of Western meddling in that country, bad government within Ukraine, the neo-liberalization of Ukraine under Western direction, neo-Nazism, religious schisms and the fractious and fraught relations it has with its neighbors and internally. Ukraine is not a happy place, not where you might want to take your significant other for a vacation at the moment.

We had a brief look at Ukraine’s chart last time without going into any detail. But if we want to know what to expect in the near future, then a more detailed analysis is warranted. Given Ukraine’s present troubles, much of what follows will sound quite negative, but it gets to the crux of Ukraine’s current problems. It also shows a way out of them. The chart again is below (bigger): 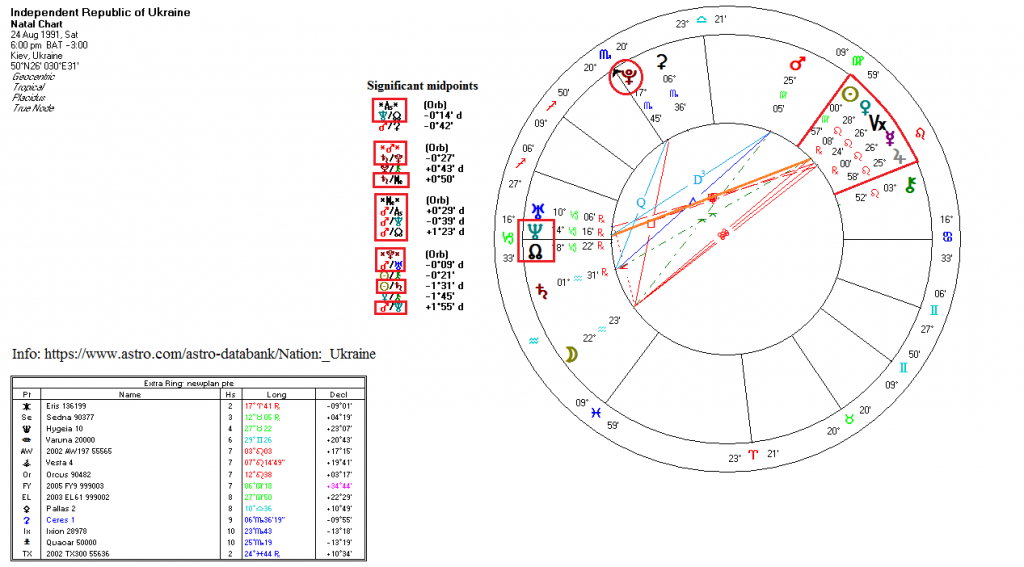 Ukraine took a step toward despotism on the 26th when the Rada (parliament) authorized martial law in 10 regions in the southeast of the country. That is the region that borders the Black Sea, the Sea of Azov, the Donbass and Crimea – all the hot spots in Ukraine. Those regions are also strongly pro-Russian, with the majority population there being Russian-speaking and having been part of Russia for at least two centuries. Ukraine has a Virgo Sun with a stellium in Leo, including Mercury, Venus, Jupiter and Chiron. The latter demonstrates as the loud complaints against any perceived slight against the nation. The Aquarius moon is not a warm placement and it is opposite the stellium and square to Pluto. Pluto is in Scorpio, the sign it rules and is conjunct the Midheaven. In all, even though the Sun is in a wide conjunction with Jupiter, it can be a cold and bristly setup, which can also lean toward being very calculating and not very caring of who gets hurt in the process. That brings us to the angles, where it gets even more revealing.

The Capricorn Ascendant is the midpoint between Neptune and the north node, which makes for uneasy relations with the outside world and an inhibited outlook. It can also point to deceit from others and misfortunes. Since the Ascendant represents the common people and the general mood of the populace, we see that Ukraine has been ill-at-ease with its surroundings since the very start. Capricorn rising also points toward ambitions, though. But with the midpoint structure it points more toward thwarted or disappointed ambitions, as well as outside forces interfering and selling snake oil to the populace. If this sounds bad enough, hang on, because we are just getting started. And, all this will be backed up in due course.

Moving to the Midheaven, we find a Mars/Neptune midpoint there, with Mars and Neptune in tredecile aspect, which is of the quintile series of aspects. That midpoint indicates weak leadership and instability. More than that, it points toward a reliance on subconscious patterns and general discontent, This is what we have seen with the Ukrainian leadership, especially since the Maidan coup of 2014. They have played on old cultural sentiments to keep themselves in power and advance their agendas. Quintiles often carry a note of obsessiveness, but also of hidden creative potential. The MC also makes a midpoint with  Mars and the Ascendant as well as with Mars and the nodes. So, there is a strong Martian tinge to the MC, with the latter two midpoints indicating comrades in arms, shared work but also conflict. And that brings us to probably the most revealing midpoints, involving Pluto – itself conjunct the Midheaven.

The strongest midpoint Pluto forms is with Mars and Uranus, which speaks of force loud and clear, as well as violent interventions. This midpoint forms a septile triangle, with the septile influence giving a doorway into other realities. It could be a highly spiritual  configuration, but currently it is expressing quite violently. There is also a Sun/Saturn midpoint, with the Sun and Saturn quincunx each other, which points toward developmental problems due to illness. The illness to which Ukraine is prone is toward Nazism and separatism. We’ll have more on that in a bit. The Sun/Saturn quincunx gives a tendency toward depressing influences anyway, with Pluto also representing underground resources – gas, anyone? Or coal? It also reinforces the previous reference to reliance on subconscious influences. Ukraine has trouble with both gas and oil. The coal regions are in the southeast of the country, the region currently under martial law. The latter has not gone down well with the populace of the region.

And finally, if the preceding was not enough, there are the Mars midpoints: Saturn/Pluto and Saturn/MC. The Saturn/Pluto midpoint with Mars can be quite brutal and ruthless, also at times pointing to attacks, the necessity to fight for one’s existence and maltreatment, especially when it is activated or when it activates other points in the chart by direction. The Saturn/MC midpoint with Mars is also not a happy combination, pointing to separations, mourning, feelings of defenselessness and suffering under oppression. The question naturally arises, then, as to if these midpoint structures were activated or activating key points in Ukraine’s chart. We have the following key events:

Petro Poroshenko, in his attempt to impose martial law across the whole of Ukraine, had sought to assume dictatorial powers, to become an autocrat. It was a strong step toward dictatorship in Ukraine. It was also an attempt to silence his rivals and put off elections. It was fomented  by what we would otherwise call a ‘false flag’ event, with the Sea of Azov incident, blamed on Russia by Ukraine and the West. He failed, but that does not mean that the future of Ukraine is secure. Far from it. There are other provocations that can be staged, other measures to be undertaken. At this juncture there is still much that can happen. If this chart continues to prove itself, Saturn will transit over the natal Uranus/Neptune midpoint in the early days of next year, mentioned before, which can represent a painful loss. Directed Saturn will be almost exact on Ukraine’s Venus, which also points to difficult times.

If you haven’t seen it, there is a film that outlines what has been and is continuing in Ukraine. Since its separation from the USSR and proclamation of independence it has been beset by a host of troubles, partly due to its past history, even far predating the Soviet years, and now largely because of three factors:

Can these things be turned around? Of course, but it would take strong leadership, which is not forthcoming and probably would take a long time. Dictatorship is not strong leadership, nor are the NATO members behind the recent event on the Sea of Azov likely to be that patient, given the pace of evolving geopolitical shifts. Some of the midpoints listed, along with the Capricorn ascendant point toward a hard-working, determined populace when rightly applied, capable of great achievements. This is especially true of the Mars and Pluto midpoint trees. In all, there could be a bright future for Ukraine, but foreign powers would have to stay out of their business. Given current antagonisms between the West and Russia, that is not likely to happen. If a dictatorship does come about, that will set Russia even more on edge. It would also not go down well with the EU. Common sense would say that the Russians are not about to allow too much untoward to happen to the ethnic Russians in Ukraine, nor to allow another NATO state on their border. If worse comes to worse, Ukraine could easily split, or be split. No one really wants that. Great care is needed there, especially in the months immediately ahead.