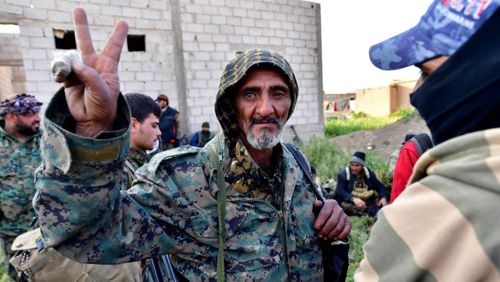 Now that the Kurds have gone back into the Syrian fold, the situation on the ground throughout Syria will evolve very quickly. The war that started in 2011 will draw to a close over the coming few months. There will be a small pocket of American forces still extant in Al Tanf, but they will not be a major worry to Damascus. A fly in the ointment, but not enough to spoil it. Given what has just happened, we want to take a look at what will evolve in Syria over the next year.

This is the second of three articles on the Turkish invasion of Syria. Here, we want to look at where this all started, where it is now, what it means for the Kurds and a look a little ahead for Syria. Before we get to what will be emerging in Syria in the next period, we want to take a step back and look at where this present situation originated, with the Syrian war. It has been cited as a civil war, but in effect it has been a proxy war. It was also cast as a popular uprising, a revolution, but in fact it was an attempt at a coup by foreign actors.

Revolution usually shows in midpoints three years prior to their actual exact position. The ‘revolution midpoints’ all involve Uranus – Ura/Plu, Mars/Ura, Mer/Ura, Ura/MC, Sun/Ura. In other words, three years prior to the signing of agreements, indicated by the exact direction to or from the midpoint, the revolution would take place. So, for example, if we were looking for a revolution in a nation, we would not look for an exact direction of one of the aforementioned to the MC or ruler of the same, but three degrees prior. Do we see anything like that with Syria’s chart in 2011? The directions at the beginning of the war are below (bigger):

The Midheaven midpoints would be at the first degree of cardinal signs, or at the 46th degrees (16 fixed). Then, one has to consider the ruler of the 10th, Mars in this case, at the 23rd degree of cardinals and 8 degrees of Mutable signs. Given the above formula, the critical degrees indicating a revolution for Syria would be the 20th, 43rd, 65th and 88th degrees. In fact, there is one, but it cannot be counted – Mars/Ura – because the direction would be to Mars. It is generally accepted that directions to and from midpoints containing one of the planets in the midpoint are not active. In other words, revolution in Syria is not indicated for the start of the war. Something else was afoot.

With the preceding in mind, the war started on 18 Mar 2011 at 1:00 pm in Daráa. It was cast in the Western press as a popular uprising. Prior to the 18th the protests had been peaceful. But on that day, just after noon prayers, the shooting started, with snipers on the rooftops targeting both civilians and Syrian police. There were more police killed on that day than protesters. The protests were actually a staged event. The Western powers immediately drew up plans for ‘humanitarian intervention’. There were no ‘revolution directions’ active at the time, even including the 45° modulus, except for one: Mer/Ura=Asc/Moon.

Essentially that direction represents the protests, the cries for reform in Syria, which Assad was seeking to redress, but not the violence which would result in the toppling of the government. Neither the MC nor Mars were involved. It is useful to note that at the same time, the West had established a no-fly zone over Libya in the prelude to the killing of Gadhafi. This was the era of the Arab Spring uprisings.

However, the violence and deaths were indicated. If we look at the midpoint trees to Chiron, we get quite an interesting picture (see chart). We see the ‘death axis’ and one of the ‘revolution’ axes there (Mars/Uranus), and at the time of the first shots were fired, the Ura/MC midpoint was directed there. Chiron, as we see, is a very sore point in Syria’s chart.

Chiron is in Syria’s 2nd house, and one of the primary reasons the NATO members wanted to go into Syria was because of Assad’s repeated refusal to play ball regarding oil pipelines through Syria and his oil resources. Hence, the ‘Assad must go!’ narrative was endlessly parroted in the news media. He was thereafter cast as a brutal dictator, whereas in fact at the time of the protests he was actually trying to appease the protesters and institute reforms (Uranus/MC, or governmental reforms).

Now, the transits at the start of the war show the unrest in the nation at the time. There was a transit of Uranus to the Syrian Midheaven and transiting Saturn was square the Horizon from the 4th house (the opposition forces and infrastructure). So, it was not like there was no stress in Syria in 2011. But as in the case on individuals, it takes major directions to signify changes in government. Uranian transits signify reforms and leadership spills, but not overthrows unless they are activating other directions. That was not the case for Syria at the start of the war. The necessity for the reforms and the disgruntled populace was shown by the Saturn transit through the 4th house and the Uranus transit.

However, what we did have in Syria in 2011, instead of a popular revolution, was an attempt at a color revolution – an attempted coup by a foreign power, by any other name. The foreign powers (and there were many) did not count on the resilience of the Syrian government and its loyalist supporters. That is shown in the Syrian chart by the Mars/Jupiter sextile, which is also a wealth aspect, building long and into the future.

The toughness of the Syrians is also shown by the Saturn/Uranus conjunction in the 11th house, which also points to the steadfastness of its allies – “A self-willed nature, tenaciousness and toughness, obstinacy…”. And then, to top it off there are the midpoints to the Syrian MC, noting especially the Saturn/Pluto=MC:

“The desire to rise from difficult circumstances through the application of tenacity and endurance, severity, one-sided-ness, self-sacrifice. – An ascetic person, a magician or adept. – Separation. (Flight).”

We note also the Ura/Plu=MC, one of our ‘revolution’ midpoints, and we see that Assad was never going to give in. Further, he was always going to go against the grain in the Arab world, hence the conflict. Even if Assad were to leave office for some reason, unless there was a revolution that ousted him, the same dynamics would apply to the next administration. And that would probably be even more applicable now, given all the Syrians have been through. Syria has been a huge catalyst for change in the region. That brings us to today. The current directions to Syria are shown below (bigger):

Do we see a revolution in the offing? No, there is no revolution showing, even in the near future. However, we note that a year ago the Uranus/Pluto midpoint was a few degrees away from the Syrian Sun. Clearly, there was no revolution then – or was there? Here is Ebertin’s reading for that midpoint:

“The urge for independence and freedom, untiring creative work, the tendency to make the highest demands on one’s physical energy, strong emotional tensions.”

What happened a year ago? The S-300 air defense systems were installed in Syria after the Russian Ilyushin surveillance plane was shot down by the Israelis. Freedom of the skies. In two years that direction will be exact. We have discussed the other directions in the previous article.

So, to the future, and this includes the Kurds now, we see Saturn crossing the Syrian descendant in a month. That will mark the rise into prominence of the Syrian state. If we step the directions through a degree for a year in the above chart, we see that Syria will only be going from gain to gain in the next years. China has expressed interest in investing in Syria, and sees it as a key player in its BRI project, along with Iran. Assad has played his cards very well, or his enemies have forgotten how to play cards – probably a bit of both. And the Russians are going from strength to strength in the region now, too, as the West loses its influence.

And what about the Kurds? The ones who emerged as hero fighters against Daesh and were then dropped at the first hint of Americans dying in NE Syria? Here is a preview of the deal that has been struck between them and Damascus:

1/ The abolishment of the #SDF (Syrian Democratic Forces), with all the current Kurdish forces and military groups joining the 5th Corps (Assault Legion) under Russian control

2/ A solid guarantee of full Kurdish rights in the new Syrian constitution with autonomy which will be agreed upon by Kurdish leadership & Syrian state.

4/ #Manbej & #Kobani were agreed upon for #SAA to enter quickly, whilst #Hasakeh has seen a wide scale deployment of Syrian troops, this will continue in #Qamishly and other joint areas

6/ Within one month Kurdish leadership with start to take up some official roles within the current Syrian government to ease the transition period of N. #Syria until an new constitution/government is formed in the future

7/ #Tabqa in #Raqqa was also on the agreement, Syrian forces entered the city and took control of the military airbase earlier today

8/ #Russia had brokered a similar deal a few days ago, yet it was rejected by #Damascus who wanted more concessions from the #SDF.

10/ The agreement between #SDF and Syrian gov is yet to be fully completed, the finer details will be fleshed out over the next four days.

12/ The agreement thus far is effectively a military one, based on self-defense and mutual interest with a number of set aims. The governance/land delegation/isis prisoners part will follow later

13/ Syrian forces will deployed on the entirety of the border with #Turkey, this is the first time in 6 years that the Syrian army will have a serious presence in N. East #Syria

14/ Although #Manbej is one of the cities that the Syrian army would take according to the agreement, the situation there is still tense and it is unclear exactly who will control it. #complications

So far, so good, and not too shabby for the Kurds, really. Better than having to face yet another massacre at the hands of the Turks. Of course, most readers will be skeptical of the agreement, and we do have to wait and see. But so long as the Russians are involved, Damascus will probably stick to its agreements. And we can probably safely bet that Damascus will seek to hold onto and build as many allies as possible. And, too, the Kurds will not forget how they have been treated by the Americans. A new chapter now opens for the Syrians. May its people find peace and heal quickly.

Featured pic from The New Arab