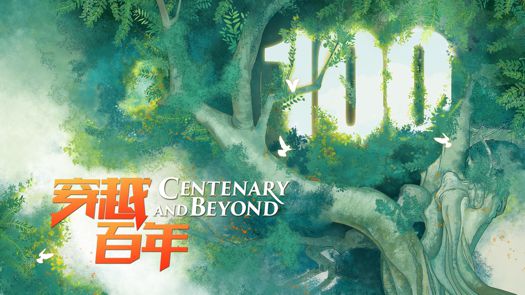 Tomorrow will be a big day in China. July 1st 2021 marks the centenary of the founding of the Chinese Communist Party (CCP). Somehow, we might surmise few people in the West will be celebrating along with the Chinese. And actually, unless one hears it on the news, very few people in the West would even know how old the CCP is, much less when it was founded. But we are going to have a look at it here, largely because it is important to understand just what all the fuss about China is in the West and why America might possibly want to go to war with China. With all the negative press China gets in the West at present, a look at the astrology might give us some clues as to why, and why the West’s pushing back against China’s rise may not be the brightest idea in the world.

The CCP was founded in Shanghai sometime during the day on 1 July 1921. Thus, we do not know the Ascendant for the CCP. But the planetary combinations will tell us enough of what we need to know about it astrologically. The noon chart is below (bigger): 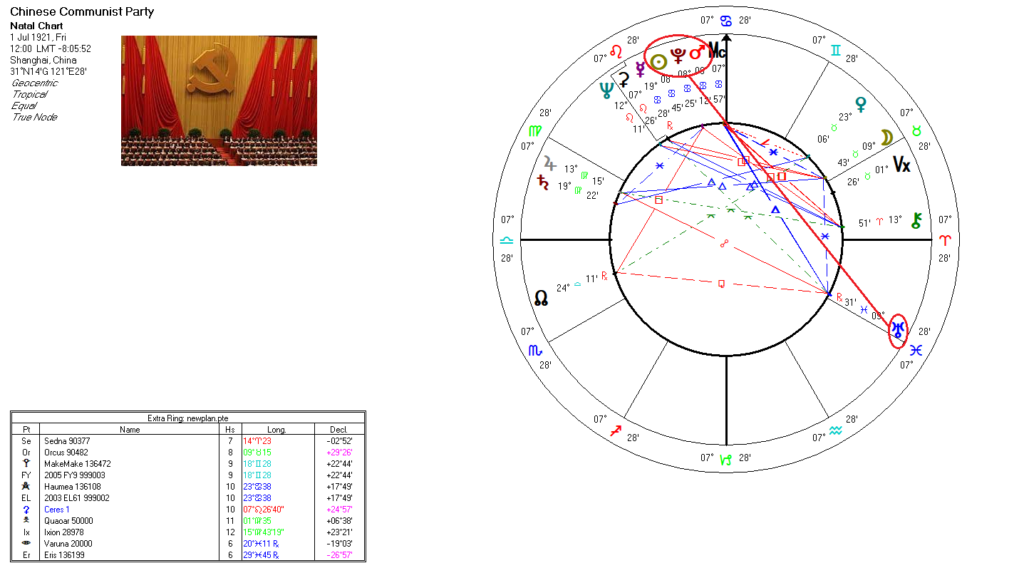 The immediate standout is the combust stellium composed of the Sun, Mars and Pluto, all within a degree of each other. These are in turn trine to Uranus. And if the founding occurred close to noon, the Taurus Moon is sextile to both Uranus (in Pisces) and the stellium in Cancer. The stellium is very powerful, even though Mars is in its fall. The stellium combination is described as follows:

A hard-working person, the ability to work till collapse or complete breakdown. Injury, accident, violent measures, an upset or shock caused through the intervention of Higher Power.

The combination can also be read as a midpoint, with Pluto as the midpoint, Plu=Sun/Mars: “Fanaticism or one-sidedness in work, the desire to achieve a lot or to make a great effort, unscrupulous procedure. – The overtaxing of one’s strength, violence. (War).”

No matter how one reads the combination, the following stands out – record achievements, the desire to achieve great things, overtaxing of one’s strength and the possibility of unscrupulous behaviour. There is also the possibility of accidents and violence. China has experienced or done everything described in the above at one time or another.

When we look at the Uranus trine to the stellium, though, another side to the hardness of the stellium comes through – making such efforts for humanitarian purposes, like for instance, raising their entire population out of the worst kinds of poverty. And this was done over the past 40 years, involving 100s of millions of people.

Yet another side to the Uranus trine to the stellium is longevity. The Sun trine to Uranus is one of the indices of a long life.

There is no denying the rise of China has been spectacular, especially when one looks at its infrastructure, the health of its people and its economic success. I am not here to argue the pros or cons, virtues or vices of China. Every nation has them. I am well aware of the negative press China receives on a daily basis now in the West.

Given the preceding planetary combinations it is also clear that China will not bend in the face of pressures and will rise to meet any challenge, as they recently showed with the COVID epidemic in China’s borders. They had the epidemic beaten in a matter of weeks, whereas we in the West still battle on with it.

But the resilience and power shown in the chart also apply militarily, which is a big reason why no one should think of trying to go to war with China. To energize that stellium would bring out the hardest side of it in a military conflict – a warning to Washington and the UK

China’s Sun, the CCP having been ‘born’ on 1 July, is also conjunct the Sun of the US, ‘born on the 4th of July’. And this brings up one of the main points for looking at the CCP chart. The synastry between the two nations is below (bigger): 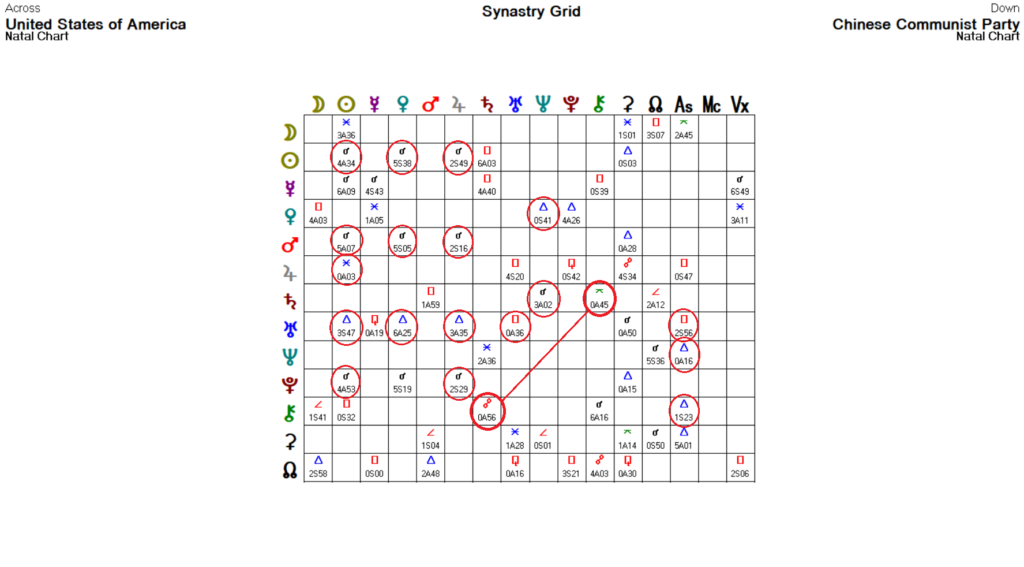 Some readers may not like to hear it, but relations between the US and China have benefitted the United States. In fact the relationship has been mutually beneficial. One might argue they have ‘stolen’ industry from the US, but the hard fact is US companies handed China those jobs and industry on a silver platter, at a time when China was relatively weak and certainly backward. And the US government enabled the offshoring of those jobs, and in fact, welcomed it. Doing so brought cheap consumer goods into the US as a result. An iPhone produced in the US or another Western nation would be quite a bit more expensive otherwise, for instance. The Chinese didn’t ‘steal’ our jobs. Our leaders handed those jobs to them. But now they use that as a cudgel against China. Why?

A quick glance at the synastry shows why there is such a painful relationship between the CCP and Washington, because we see mutual Saturn/Chiron contacts between them, and those can be excruciatingly painful in relationship synastry. Ironically, they also tend to keep the couples – nations in this case – tied together until a breaking point comes. The breakup can be quite bitter and final in such a case. That would not be a good outcome in this case because the economies of the two nations are intertwined.

The real reason there is such animosity in Washington towards China is because China refuses to privatize its primary infrastructure and follow IMF rules. It also prohibits its oligarchs any say in government policy. In other words, China rejects neoliberal economics and exercises tight control over its money supply. Hence, they are portrayed very negatively in the American press, now being followed by Europe. Such actions will only hurt consumers in Western nations. The same is true regarding US relations with Russia, China and Venezuela. They are portrayed as ‘threats’.

What is the actual ‘threat’ a nation like China poses to the US? It is certainly not a military threat to the US. China has no military bases on American borders, in fact nowhere near them. It only has one offshore military base that is used for armed purposes, and that is in Djibouti. It is there to protect shipping through the Red Sea, and largely to protect its shipping against piracy, which has been a real problem for shipping in general throughout that region.

No, the only real ‘threat’ China represents to the US is that the American people may want to follow China’s example of dumping the neoliberal economic model and pour money back into infrastructure and rebuild its industrial base. The oligarchy in the US is dead-set against that, as it would do things like inspire labor movements and give more of a voice to workers and the like. It would also involve increased taxes on wealth, as in rental (unearned) income and taxes on US multinational corporations. In other words, the gravy train for the rich, CEOs and stockholders would come to a grinding halt. Imagine. Instead, Washington would rather go to war with China thatn adopt sensible economic policy that would build the country.

There are 90 million members in the CCP, and it is a meritocracy. In other words, to be a member one has to have actually done something for the nation or be actively involved in ‘making China great’ to become a member. If you want to know more about China there is a book that is quite eye-opening. And if you have satellite, one can watch stations like CGTN to get another view of China. Or, one can just follow the propaganda from the likes of the BBC and American media, who would lead us down the garden path toward war with China.

Despite all the predictions over the years that the CCP is on the verge of collapse, it has yet to do so. In fact, the popularity of the CCP in China has only increased over the years. And nation after nation is signing on to the Belt and Road initiative. Virtually all of Africa and Asia are now signatories. It has come to South America and Oceania. One want might to ask why, if China’s projects are so ‘predatory’, as they are portrayed in the US.

As much as it may madden the hawks in Washington, neither China nor the CCP are going away any time soon. Regardless of how we might feel about China, it is better to learn something about one of the world’s oldest civilization-states instead of simply parroting the negative press and rejecting China out of hand. We reject them to our own disadvantage. Instead, would it not be better for us to hold our own leaders to account and change the policies that actually disadvantage the public to the benefit of those people getting rich off our own labors?