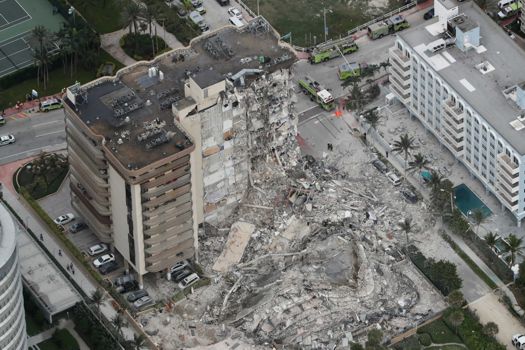 On the day of the full moon, 24 Jun 2021, at 1:30 am local time, a 12-story apartment complex came crashing down, leaving 11 people confirmed dead and 150 missing as of this writing. The missing are believed to be buried in the rubble. Most of them would have been sleeping at the time. Residents had been concerned about the building’s integrity since early 2019, yet nothing had been done to correct it. This was a catastrophe that could have been avoided had timely action been taken, as in effecting the needed repairs to the building. There are many takeaways from the collapse of the Champlain Towers South building, not the least of which is America’s crumbling infrastructure.

The chart for the event is below (bigger): 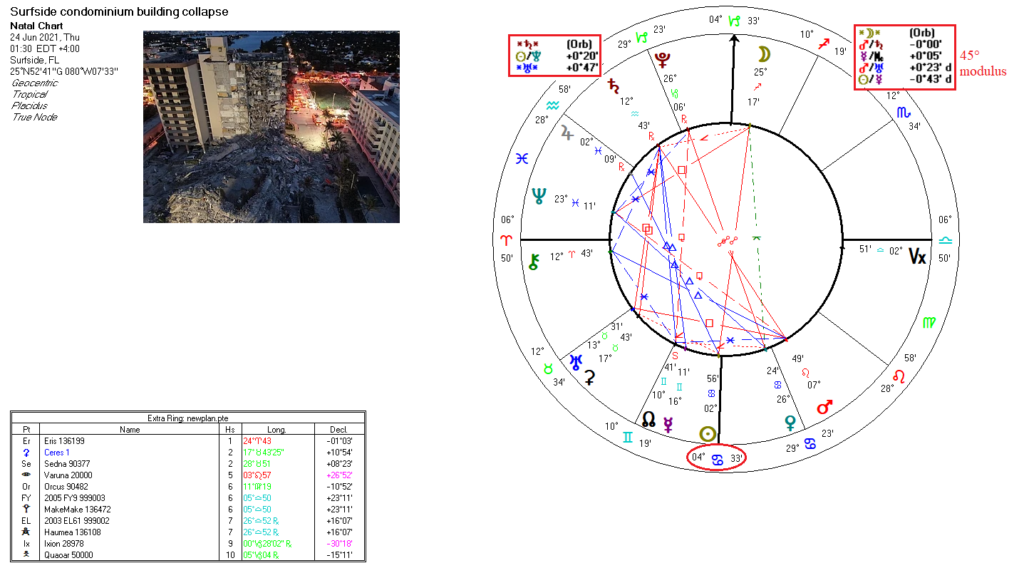 For a building collapse, there are two places to look in the event chart – the foundations (ruled by Saturn) and housing and infrastructure in general (4th house). It was known the building that collapsed was sinking at a rate of 2mm a year. That may not sound like much and may not mean much if the entire building is sinking at that rate. But if one part of the building is sinking at a higher rate than other parts, then the stresses put on support members and columns can be considerable over years.

The Champlain Towers had noticeable stresses and decay setting in. There was also a lack of maintenance having been done. There were cracks observed in the concrete columns of the parking deck and exposed rebar in the upper floor parking deck, from a structural survey report filed at the end of 2018. From the Miami Herald:

“Six engineering experts interviewed by the Miami Herald on Saturday said that based on the publicly available evidence — including building plans, recent inspection reports, photos of debris, an eyewitness, and a surveillance video of the collapse — a structural column or concrete slab beneath the pool deck likely gave way first, causing the deck to collapse into the garage below, forming a crater beneath the bulky midsection of the tower, which then caved in on itself.”

That parking deck was directly below the pool deck, where the collapse started, which gave the major clue to the collapse. The event was observed directly by a resident, who frantically called her husband:

“Early Thursday morning, Mike Stratton awoke to the sound of his cellphone ringing. It was his wife, Cassie Stratton, on the other end, speaking frantically about their condo building shaking. She told him she saw a sinkhole where the pool out her window used to be. Then the line went dead.

Monday was the last time Mike saw Cassie, when he departed Miami on a business trip to Washington, D.C. Now she is one of the 159 people unaccounted for…”

The shaking of the building was captured in one of the units, where there was video of debris raining down 13 seconds before the building collapse. It was motion-activated video. The owner was not there at the time. In a controlled demolition that would not have happened. The building was clearly unstable.

What we know thus far are the probable causes of the collapse. Investigations will be ongoing. There were no reports of explosions, as one would expect from a controlled demolition. If one has ever watched a controlled demolition, the building comes down immediately instead of shaking for some seconds before giving way. This point will be important after we look at the astrology.

Returning to the chart, we start with Saturn and the foundation. Saturn was within a degree of the square the Uranus, though separating. But the telling combination was the Sun/Neptune midpoint that had just formed. The Sun was conjunct the IC, with Neptune in the 12th house of the event chart. From the Sun/IC conjunction we get the connection with housing and infrastructure. With the Neptune/12th house we get ‘self-destruction’ – in this case, a building.

The Sun/Neptune midpoint is generally characterized by weakness. It is also seen in cases of extreme sensitivity and illness. It is one of the ‘illness axes’. When this is coupled with the Saturn/Uranus square, then we have a setup for a disaster:

We know from the structural survey report the building was in a weakened state, especially from the ingress of water (Neptune) from the pool area. The exposed rebar was corroded and there was spalling in the concrete. We have seen bridge collapses from that sort of thing here in Italy, notably the Morandi Bridge, which likewise had not had proper attention to maintenance in years. Water was also involved in that disaster. From the Wikipedia page:

“In 2018, an inspection performed by the engineering firm Morabito Consultants showed a “major error” in the construction of the pool deck, whereby the waterproofing layer was not sloped. Water that collected on the waterproofing remained until it could evaporate. Over the years, the concrete slabs below the pool deck had been severely damaged by this water…”

Neptune is often prominent of disasters involving water. And in the 12th house in Pisces, its strength was intensified. Pisces in intercepted in the 12th house, with Uranus being the dominant ruler of that house, itself also receiving an approaching (though wide) square from transiting Mars. Next, we turn to the 4th house – housing and infrastructure.

At the bottom of the chart we note the degree of the IC, circled, and its Sabian symbol:

“At a railroad crossing, an automobile is wrecked by a train” 5th degree of Cancer

This is a ‘disaster degree’. The IC is ruled by the Moon. It, too, receives some potential ‘disaster midpoints. There are two of note:

From the preceding, we see this event was more likely than not caused by a lack of maintenance, unequal sinking across the foundation of the buildings and the eventual catastrophic release of the stresses caused thereby. But that is not enough to satisfy more conspiratorial types. They came out in their numbers after the event, claiming everything from a controlled demolition (like in the Twin Towers), a false flag event, an effort to destroy evidence and so forth.

John McAfee, the (in)famous security software designer, was said to be connected with the event through gematria, and the conspiracies get stranger from there. It was claimed he or his family had a condo in the building, but there is no evidence to support the claim. The claim is he had 31 terabytes of information against the powers-that-be stored in the condo, and that the building was destroyed to bury the evidence. It would have been simpler for the authorities to enter the building after his suicide the day before (also conjuring up many conspiracies) and remove any evidence, rather than destroying the building – that is, if he actually had a place there.

Then, there was no evidence of a controlled demolition, which would have required explosive devices. No explosions were heard at the collapse, either in the video of the falling debris (referenced above) or reported during the phone call by the witness to the cratering of the pool deck, just prior to her tragic death, also referenced above. (She has not been found or heard from since.) Explosions are not seen in the security camera footage of the collapse, either, as one would see in a demolition. And as to flashes that were seen during the collapse, those would have been seen before the collapse of a building in a demolition. The flashes seen in this building collapse were bright and after the building had fallen away from the remaining structure, probably being electrical cables that had been severed during the collapse. The ‘demolition’ theory can probably be safely set aside.

What are we really looking at with this catastrophe, then, in terms of a wider picture? What emerges is a picture of willful neglect, more likely than not, which led to structural failure. The repairs that would have been required to render the building safe again, if that were even possible, would have been very expensive. And in our neoliberal society, expensive repairs are commonly avoided by landlords. Doing things on the quick and cheap are more common than affecting expensive repairs. And insurance policies usually cover the rest, unless criminal negligence can be proven. And the latter can take years to prove, if at all. Lawsuits have already been filed.

We live in a rentier’s world at the moment, as neoliberalism has rendered the financial-capitalist parts of the world too expensive to own one’s home for a growing sector of the population. If repairs on rental properties are deemed too expensive by the landlords or consortiums that own the properties, there are several means they use to either render the properties safe again or to evict those who complain. Sometimes the properties are sold to developers, who evict the tenants, upgrade the premises and charge higher rents to the new tenants. Alternatively, the deposits paid upon entry to premises will be withheld on exit as a means to pay for repairs. I have had both scenarios happen to me. This is not to say there are not good and conscientious landlords. There are, in fact, and I have known those, too.

Ultimately, if the repairs needed are just too expensive, tearing down to property is sometimes seen as a better alternative to spending the money to repair. And then there are the horror stories of people who will burn properties down in order to collect the insurance. We recently had a case of that here in the city where I live, too, but the owner was caught out. That’s a dangerous game.

The worst parts of the collapse of the Champlain Towers are the lives lost, the broken families and the suffering it has caused. There have been offers of help and support from across the world, but it is little solace to those left behind. And the thing is, unless regulations are more strictly enforced and unless landlords are held to account, the situation will continue, if not worsen.

The collapse of the Champlain Towers was a tragedy. With a successful prosecution of the lawsuits for damages, maybe the building codes will be more strictly enforced into the future. At least maybe that will happen in Florida. Changes and upkeep of premises held by rentiers only seem to happen when they are faced with prosecution and large payouts. Because when it comes to it, this was a tragedy that could have – should have – been avoided.