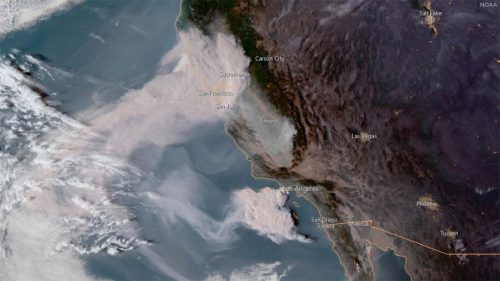 Two days after the midterm elections in the US, on November 8th, our attention was once again drawn to, or riveted on California, but not for the best of reasons. And as I got close to finishing this I got a piece of bad news, which made this article quite difficult to finish. We’ll get to why in a bit. California is known for a great many things. In the election cycles in the US it is known as a solid blue state (Democratic, as in Party), and at one time it was one of the most progressive states in the Union. It is not so much so now, and quite a lot has changed there in recent years, largely due to the advent of the tech sector, big money and neoliberal economic policy. At one time it was the place to be for many Americans and a great many people migrated there. Now many people are moving out, due to soaring rental and housing prices, changing demographics and economic reasons. It is a state that boasts an economy larger than England or France, the largest population of any state in the US, many technological achievements, and of course, Hollywood, just to name a few things. But given recent events, I have had to take another look at California’s astrology, and that, along with the latest event, is what we will cover here.

The chart commonly cited for California uses a time of 9:32 AM, which was when it was pronounced as a state by Congress. However, I have not found that the chart works too well. A time closer to 9:00 AM gives more detail and speaks more to the major events in California’s history. The 9:32 chart gives Scorpio rising, and this would indeed speak toward the intrigue we find in Hollywood, for instance, with its focus on sexuality and sex scandals. But Hollywood is only a small part of California. California is, or has been, quite a vibrant state, with a wide diversity of demographics – Caucasian, Mexican, Oriental, to name a few – and being a one-time hippie, I can resonate with the fact that California was the birthplace of the hippie movement. And then there was the gay movement that had its main start in San Francisco. This is another reason given for acceptance of the Scorpio rising chart. But from a more esoteric perspective, choices about sexuality are made in Libra, whereas their expression is cemented and worked out in Scorpio. To settle such arguments, we have to look deeper into the California chart and look for the more definitive events in California’s history, the events that have shaped its history and evolution, rather than being a sort of overall expression. We’ll touch on a few of those here. California’s chart as commonly accepted is shown below (bigger): 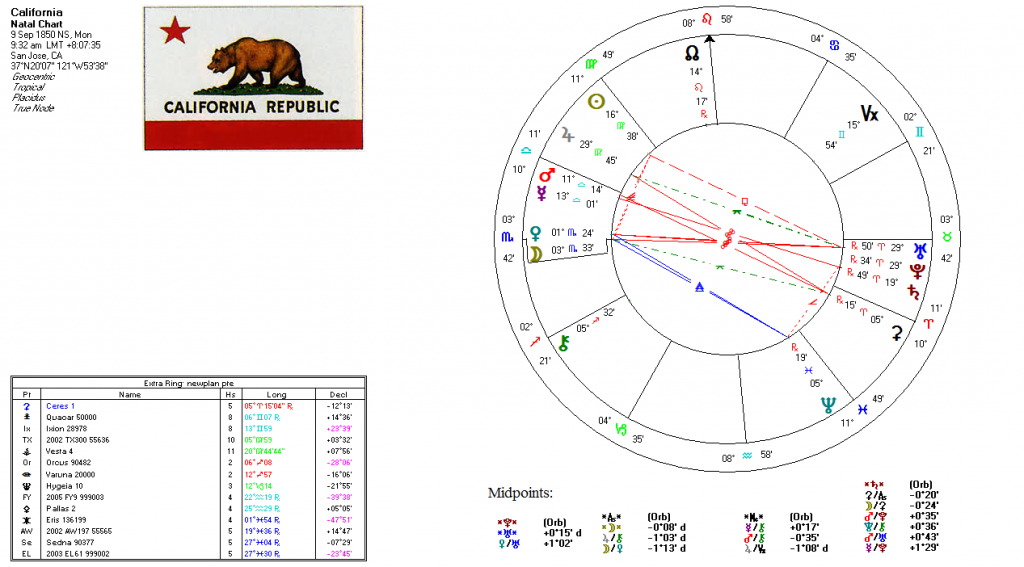 If there are significant events, those should be reflected in transits and progressions to the angles of the chart or to the rulers of those angles. Keeping in mind that the date of California statehood is not in question, we are looking for the proper angles. One of the defining characteristics of the state of California and probably its most notable institution is its so-called “Silicon Valley”, from where the tech revolution was born. We would thus expect Uranus to be one of the main significators. In the Scorpio rising chart we find Uranus in the 6th house (services, military, police, health) near the 6th  house cusp, partile to Pluto. Uranus rules the 4th house of infrastructure. Pluto would rule the 1st house in this case. California is also well known for its agriculture, the 4th house in mind, and the Napa Valley is world-renowned, especially for its wine and other exports. And the Sun rules that house, hence the gold fields in California, which is what really got it all started.

Then, taking the Uranus/Pluto into account, they are opposite Venus, which is all about relationships anyway, the latter in Scorpio and semisquare the Sun, thus forming a ‘hard opposition’. Venus is also conjunct the Moon. This is not an easy configuration, and even by itself, regardless of house placement, points to scandals, difficulties in sexual relations, unusual partnerships, sudden upsets in relationships and so forth. This is added to when we look at the trine between the Venus/Moon and Neptune, which points to the allure of California as a place to live, as well as to the film industry and the glamour that is so associated with the state. The trine also gives a high aesthetic sense and idealism, for which the state is also known, and which tends it toward progressive political thought. However, coupled with the hard opposition, that can be co-opted by other forces, and the thing we see with California politics these days is a Democratic Party that has turned sharply toward corporate funding and interests. With the powerful tech sector in California, which is also tightly bound to Wall Street, we see that underlying all the glamour and purported high idealism – which in many cases is also real – there is also an underbelly of often nefarious interests. Venus is therefore also a major indicator for this chart in addition to Uranus.

In the Scorpio rising chart Venus rules the 7th and 12th houses. Does this fit with what has just been described? To an extent. The 12th house would certainly point to scandals, as well as to spirituality, which is also another manifestation of the configuration described in the previous paragraph. The New Age Movement was a significant development in California’s history, but itself prone to being co-opted by people who simply wanted to make a buck, which sometimes happened. On the other side I know many spiritually-based people who live in California and who carry on good work. But people do seem to love a good scandal and the gossip columnists have made a living off of California for years.

Gossip columnists would be ruled by Saturn (3rd house) in this case, which would not appear to fit the California mold. The situation changes, along with many other factors, if we move the rising sign to the last degree of Libra. In that case, Venus rules the 1st and 8th houses, more reflective of the easy-going attitude of many Californians (1st house), sexuality (8th house) and Jupiter takes over the main rulership of the 3rd house (press, travel, commerce, communications), with Saturn as the ruler of the intercepted Capricorn, also in the 3rd house. With that being the case, we find the awful situation with traffic in California, with clogged highways, problems with pollution, etc., but also the proliferation of media in the state. In the Libra rising chart, Venus also still rules the 12th house, so a Libra rising chart would seem to be a better fit. The Libra chart is shown below (bigger): 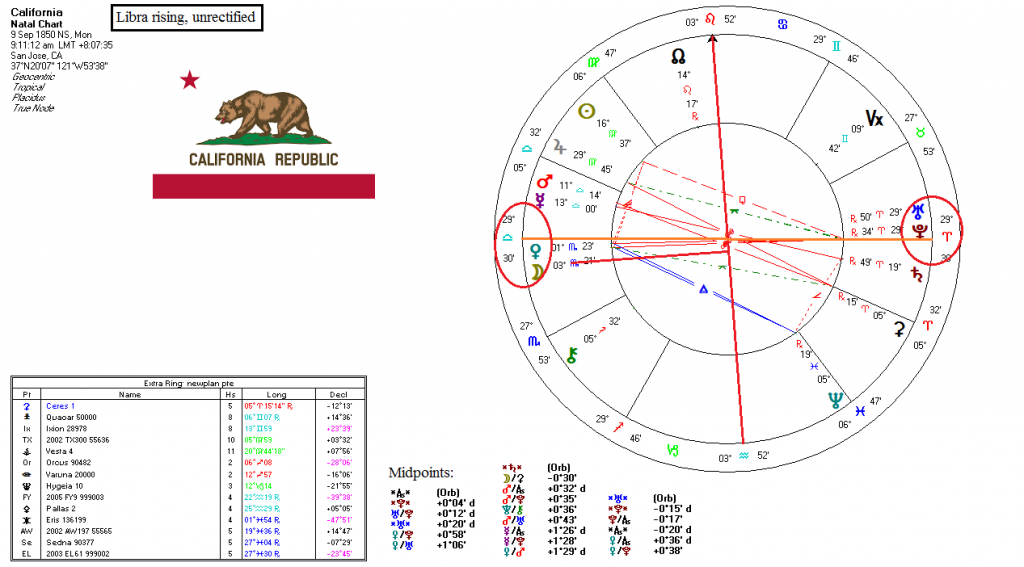 One of the major factors for which California is known, aside from all the preceding, is disasters, which brings us to the reason for this post. And we are now experiencing one of the worst disasters of its sort – the Camp Road Fire of Butte County. In fact, there were four major fires that started on November 8, all across California, so that date should show in either the Libra or the Scorpio chart as being highly significant. Just to list them, we have, in order:

The Camp and Woolsey fires are the worst, but we will stay with the Camp fire, which is now the deadliest and most destructive fire in California history, having claimed 71 lives thus far, with over 1000 missing as of this writing, having destroyed close to 12,000 structures, among them upwards of 10,000 homes and being 57,000 hectares in extent. The cause of the fire is unknown. We won’t speculate on the cause here, but the implication is one of an accident or ‘act of God’, or even perhaps an electrical problem. It was first reported at 6:33 am near Pulga, California. It would have started at least a few minutes before. 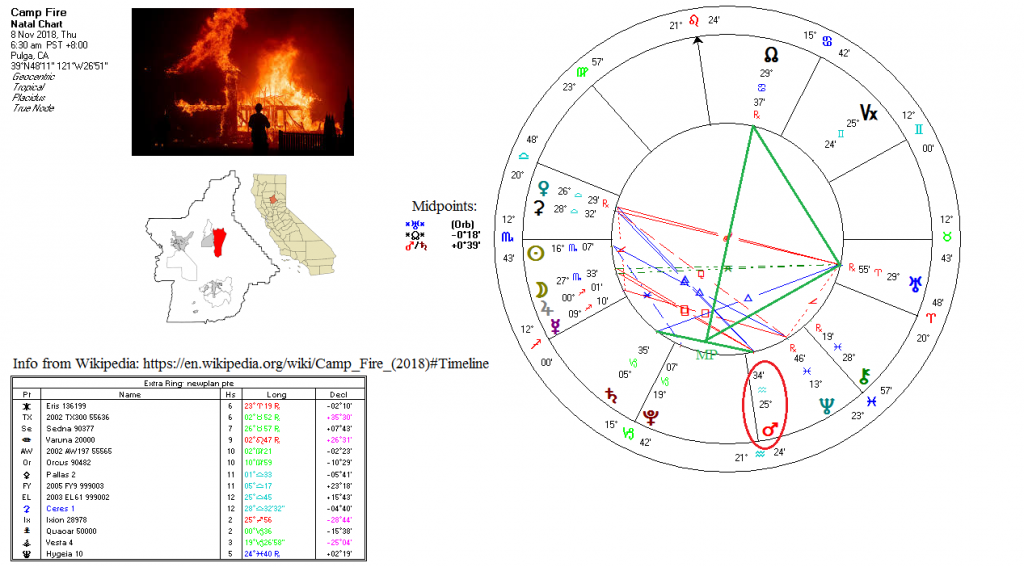 As just a brief description, (bigger) Mars was close to the IC of the fire chart, with Scorpio rising. Mars conjunct the IC or in hard aspect to the meridian axis or the rulers of that axis is often found with significant fires. There was a strong death axis setup in this and all four charts of the fires that day, with Uranus=Mars/Saturn=Node, Uranus being square the nodal axis, which has also accompanied other recent terrible events. Aside from fires, of which there have been many, there are also earthquakes and drought. With the Libra rising, the indication would be that California has trouble with water, which it does, along with high winds at times, which also contributes to droughts and fires.

Does the Camp Road Fire chart measure up to the Libra rising chart? One of the midpoints for the Libra rising chart is Mars/Ascendant=Saturn, one of the readings for which is suffering or mourning with others. That is coupled with another one, Mars/Pluto=Saturn, which is about overcoming obstacles and difficulties in forceful ways. Directed Uranus/Pluto are opposite California’s Saturn now, activating those axes, along with the Uranian component, pointing to the unexpected and catastrophic nature of the fires (below, bigger). There is very little activating the angles in the Scorpio rising chart now, which is not reflective of the severity of the events. And to top things off, in the Libra rising chart, transiting Uranus is now conjunct the Descendant and square the meridian axis. All of this, at least for this one day, goes toward confirming Libra rising for California. What about other disasters, then? 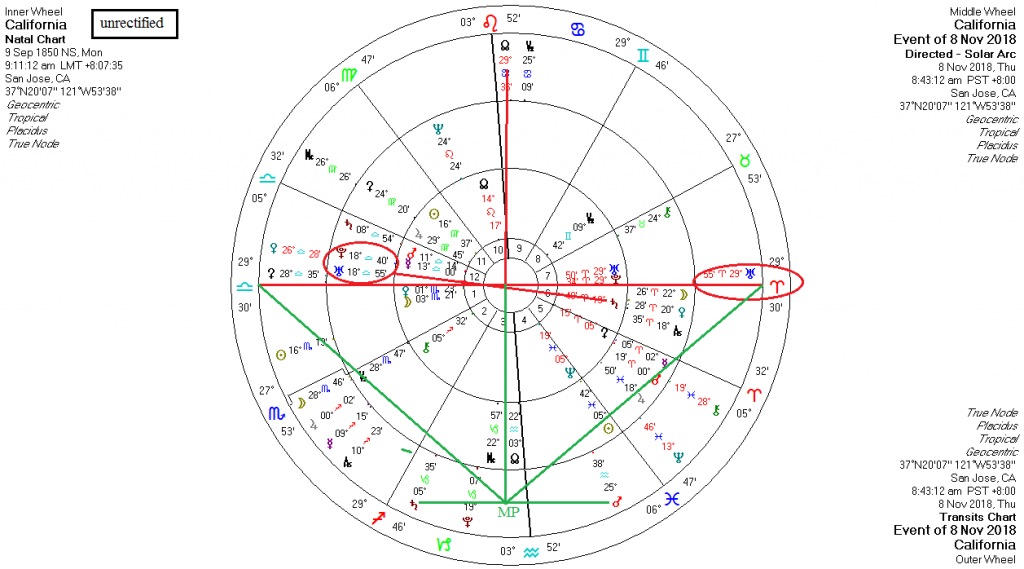 We can talk about the testing nature of Scorpio in relation to California, especially regarding disasters, and the state has had its share of troubles. It has been my experience, though, that any time Uranus is found in hard aspect to any of the angles in a chart natally, it gives the same sort of testing nature and appearance. The same is true for Neptune and Pluto, for other reasons, and California has both Uranus and Pluto on the horizon axis in the Libra chart. But Aries on the Descendant points to the pioneering spirit of the people of California, more than does Taurus from the Scorpio chart. As for other disasters, we’ll look at the charts of some of the most severe and see what they tell us:

These were the three deadliest wildfires. As for earthquakes:

The end result of this is that the Libra chart works better as a reliable indicator of events than the Scorpio rising chart. That being said, what has happened in California since that November day will be forever etched on my mind. One of my friends, who is a client, lost her house to the fire that day. Luckily she is alive and unharmed, but like so many, she lost everything. There are no platitudes to offer someone who has gone through such a horrific thing. What they need is material support, a roof over their heads and food until they can get on their feet again. If you can, please give. Hopefully all of those who are missing will be found alive and well. My friend lived in Paradise, just a short distance from where the Camp fire started. Paradise was razed to the ground. Events like this bring us all to the same level and show how everything can change drastically in just a few moments. Nature doesn’t play favorites, but it should bring out the best in us, as tragedy often can. Blessings to the victims, their friends and families. We hold you in our thoughts and hearts. If there is a fiery hell, Paradise has surely experienced it.

How you can help victims of these fires: Refinery29