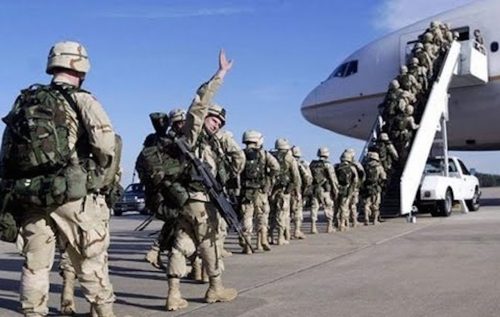 It’s beginning to look at lot like Christmas. Americans are getting a special gift this season, with the announcement by the Trump administration that the US troops in Syria are starting their withdrawal from Syria. The Pentagon has since confirmed it. State department employees begin their withdrawal from the 20th of December. The complete draw-down is supposed to take between 60 – 100 days.

We have yet to hear anything about the troops at the Al Tanf US base in Syria at the Iraqi border. This move is the fulfillment of a campaign promise by Trump when he was running for the office. It will sit very well with his voter base, as well with probably most of the American public. The Kremlin has also welcomed the move. So, why now? What has changed since Trump had promised to do so before and then did a U-turn at the urging of hawks and the Pentagon previously? There is quite a bit to consider here and it makes for a good puzzle to solve. But it is also in the astrology of the US as well.

Starting with some background, several key situations have developed since Trump first announced that he wanted to pull out the troops earlier in the year. When he backed out of his most recent statement in September, after pressure from hawks and the Pentagon, and stated that the troops would stay there indefinitely, the Turks began pulling troops away from the Afrin enclave and sending them to the border with northeastern Syria. Over the past several weeks they have threatened to invade up to a ten-mile deep strip in that region to push back the Kurds, whom they deem to be terrorists. That would have put US troops – some 2000+ of them – in the direct line of fire. Two NATO countries at war with each other would not sit well with the alliance. The Turks stood firm. The ‘terrorists’ (or ‘US allies’) are on their border, after all. The US had wanted to hold on to the region, which contains the major part of Syria’s oil. They were selling it on to finance the operation and to arm their proxy force there. It would seem that it is not such an important area now. Or is that really the case? Here is what we have which has led to this, in a manner of weeks:

This withdrawal announcement could also be a smoke-screen for something else, like maybe a strategy to pull Syrian troops away from a key area in order to enable another strike at a sensitive point. There are also rumors of a false flag in an attempt to keep US troops there. Trump’s move already has the hawks screaming. The neocons and Mattis want the troops to stay. Apparently this time Trump is not going to be deterred. But there is more here than Trump simply wanting the troops out. Turkey has again shifted toward the US with talk of buying the Patriot missile system. The Turks played the Khashoggi incident to a ‘T’. The Turkish government has always been somewhat two-faced. But then what government hasn’t, at least in the past? As usual, there is much we are not being told or are privy to, so at this point we’ll see what the astrology of the US has to say about it. The chart with transits is below (bigger): 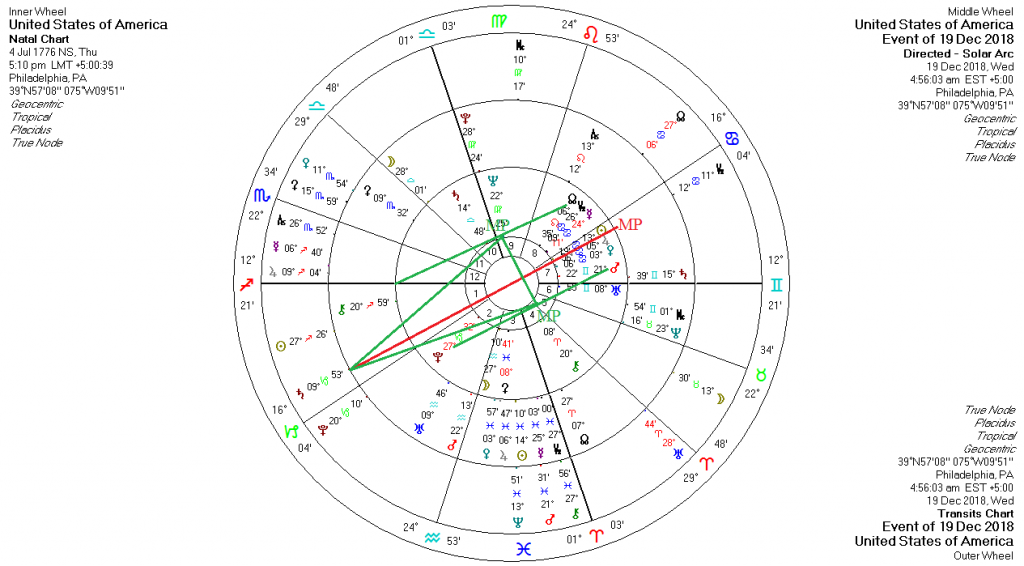 The first thing of note is that transiting Saturn is now at the Sun/Jupiter midpoint as well as the Mars/Pluto midpoint. This is a combination of influences that speaks of disappointments, incompetence, broken relationships and loss of good fortune. There is also a Node/Ascendant midpoint activated by that transit, which also speaks of disappointments in relationships. The latter would certainly seem to be the case if all the preceding bullet points are true. Given that, then, this move would appear to be a simple matter of reality hitting home. Trump has sought to give it a face-saving appearance by stating the US had defeated Daesh in Syria and that it was time to move on to the next phase of operations, whatever the ‘next phase’ actually is. Let’s forget for a moment that it was actually the Syrian Arab Army (SAA), Hezbollah, Iran and Russian forces who defeated Daesh in Syria. The US had been supporting Daesh there. What else do we see with the astrology? 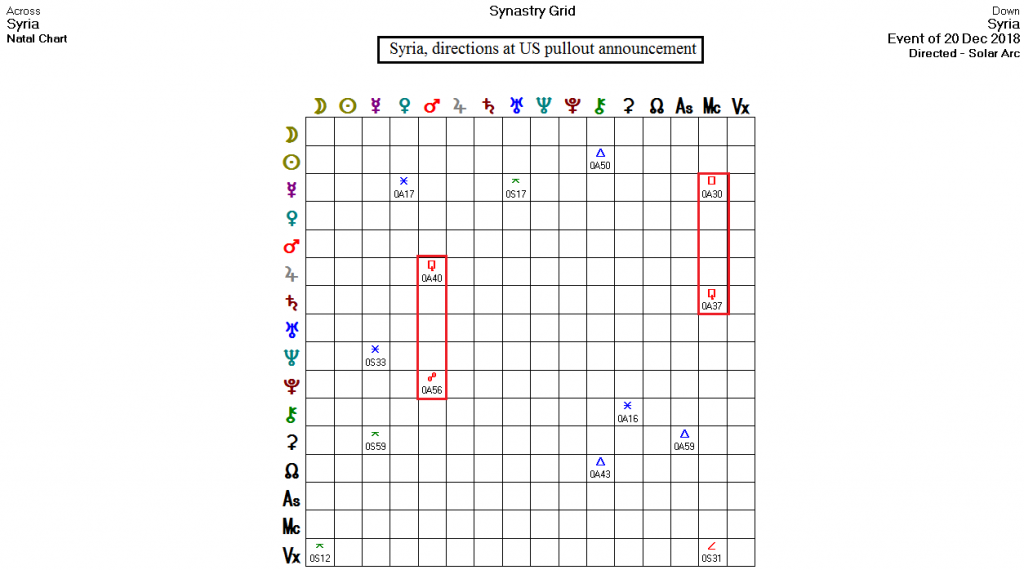 As to the US, there is not much more, either in the transits or in the directions. However, if we look at Syria’s chart (above, bigger) there is quite a bit going on. There are solar arcs of Jupiter and Pluto to Mars, the ruler of the 10th (the Assad government), which gives a desire to achieve great things, when taken all together and gives an ability to inspire others. Assad will need that if this goes ahead. There are also directions of Mercury and Saturn to the MC which gives extra ability to focus on the objectives ahead. So, on the one hand the US is weakened in the astrology at present, whereas the Syrian government is strengthened. These factors would indeed suggest that the US is pulling out because it sees it has no other real alternative. But already there are many comments on blog sites that say this is all a feint, a trick and that there will be some sort of false flag engineered to keep the troops there. On the whole, this is a wait-and-see scenario that will evolve over time. If the statement is on the up-and-up, then it is a great gift to the Syrian people and for much of the world. But a little skepticism in such cases is probably not such a bad idea, especially when dealing with the Turkish government and the US military-industrial crowd.

And what about Trump? Trump, being commander-in-chief of the US military, technically has the authority to pull the troops out. Whether the military leadership or CIA will rebel or engineer some way to stay is another matter. Uranus is transiting retrograde trine his ascendant at the moment, to finally leave early next year. He had been feeling emboldened in the past days with a transit of Mars squaring both his Sun and his Moon (he was born at a full moon), so combined with the trine to his Ascendant he took his shot. At the moment he probably feels that he has nothing left to lose. It was a good move, whether it sticks or not. Anything that de-escalates tensions in Syria is appreciated, especially as it takes away from a potential confrontation between Russia and the US. Trump is at a turning point in his career, though, indicated by a direction of Ceres to his Vertex, followed in about six months by a square to his Saturn. Saturn is natally on his Antivertex. There is more but this is sufficient for the moment. The chart is below (bigger): 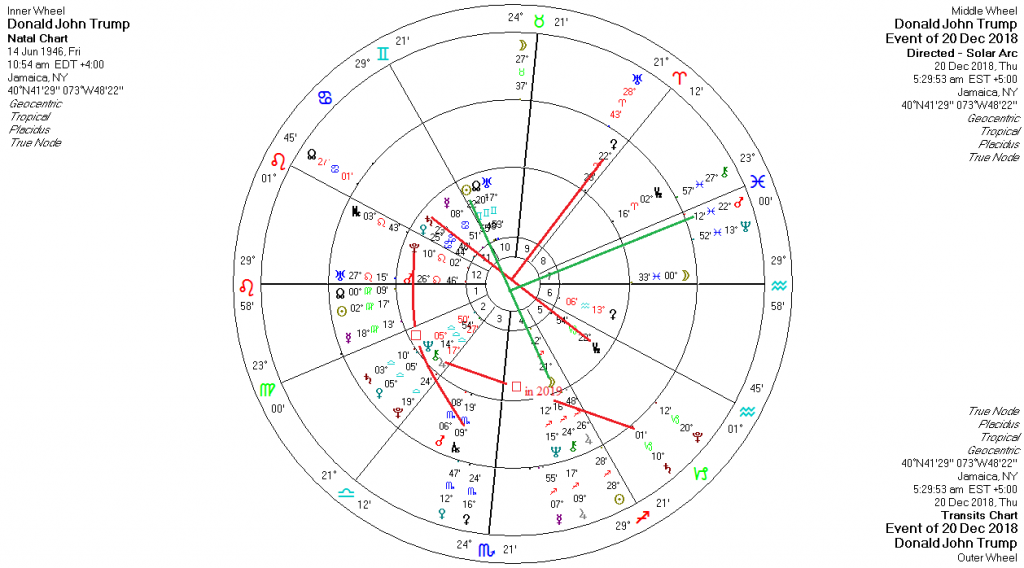 Trump recently had to shut down one of his foundations in the face of a looming lawsuit on charges of illegality. The Democrats take control of the House in January and they will be going after him, which he could actually use to his advantage if he played his hand well, which may seem contradictory to his present circumstance, but he is the ‘Teflon Don’. His children, specifically Donald, Jr. and Ivanka, are in the crosshairs of Mueller’s investigation, though. Transiting Saturn squares his Jupiter (ruling his 5th house – children) several times next year. He will be feeling his wings being clipped, and at the same time he will be looking at protecting his children. They do not have the option of turning state’s evidence against their dad, nor would they want to. And therein lies a big problem for Trump. If Mueller goes after his children we may see some dramatic moves in Washington next year. I cannot see Trump allowing that. So, 2019 is going to be a fascinating year in the Beltway. The first domino in that line was the Trump Foundation being closed down, along with a few of Trump’s operatives going to jail. If he plays according to his past behavior, we may well see indictments against the Clinton Foundation and other players in DC to draw attention away from his troubles, not that the Clintons do not need investigating. Of course, this is all speculation at this point.

What we have here is a big mix of factors, then. One big question here is how this affects the relations between Turkey and Russia. If that sours, then what of Turkish-Iranian relations and the wider Middle East geopolitical relations? The US is facing serious pressure in Syria on two fronts: the Turks in the northeast and the Russians/Syrians at Al Tanf. The sense we get is that this move by the administration is yet again a play for domestic politics. But there is also realism here. The longer US troops stay in Syria, the more tensions will escalate. There is also the factor of Afrin, which was put on hold a few months back. The Turks have an agenda in Syria. They want some of the territory, plus wanting to put down any Kurdish attempts at an independent state. With the Americans out, there will be a rush for who claims the territory abandoned by the US. By rights it is Syrian territory. Foreign forces not invited there at the behest of the Syrian government are there illegally. The Turkish government is not to be trusted in these matters.

For their part the Kurds have once again been betrayed by the US. Bush #1 did so in the first Gulf War in 1991. Their leadership has yet to issue a statement on the current matter. If they do not want to face the Turks alone then they would probably do well to reconcile with Damascus. Otherwise theirs will be a hard fight, probably with copious losses and a loss of Syrian territory to Turkey, thus prolonging the conflict. They have not shown much in the way of wisdom in their dealings with Iraq or Syria. If they choose to stand against the Turks then they will likely be facing a war on three fronts,  from the SAA, Turkey and Iraq. The result, perhaps, would be a foregone conclusion and another disaster for the Kurds. At least with Syria they would have some small measure of autonomy. The next months will be decisive for them.

This is a story to watch closely. It will have large implications for the region and for greater Eurasian integration, an initiative being spearheaded by Russia and China. This is why Syria has been so important for Western interests, in an effort to be a hedge against that integration. Syrian and Iran are key states in that regard. With Israel now pushed back and cornered, with the Saudis uncertain, with Trump facing troubles it is anyone’s guess what can happen. But no party should be written off just yet. And on a final note, when the US says it is withdrawing troops, that usually means combat troops, not advisors and special forces. Those will likely remain in Syria for the time being. Until Syria is stabilized and the war completely ended there will be no real cause for celebrating just yet. But this was a very welcomed announcement for the holiday season. Merry Christmas, Everyone! I’ll see you in the New Year.