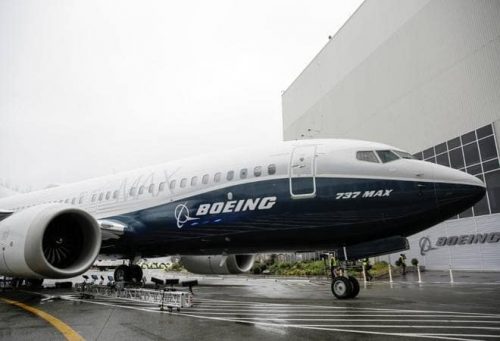 The Boeing Corporation has seen better days. After the crashes of two of its bread-and-butter aircraft due to a design fault, it is facing a loss of $2.5 billion a month due to the stoppage of sales and grounding of its entire fleet of 737 MAX aircraft, the type that was involved in the crashes. Almost 350 people died in those crashes. It was avoidable, had proper air safety procedures in the course of manufacturing and testing occurred. It is a story of a lack of oversight, cost-cutting, the rush to produce, and profits over people. It is a story across the spectrum of US industry.

The Boeing Corporation was founded in Seattle in an old barn on 15 Jul 1916 (no time of day given). The chart is below (bigger), which we will get to shortly. 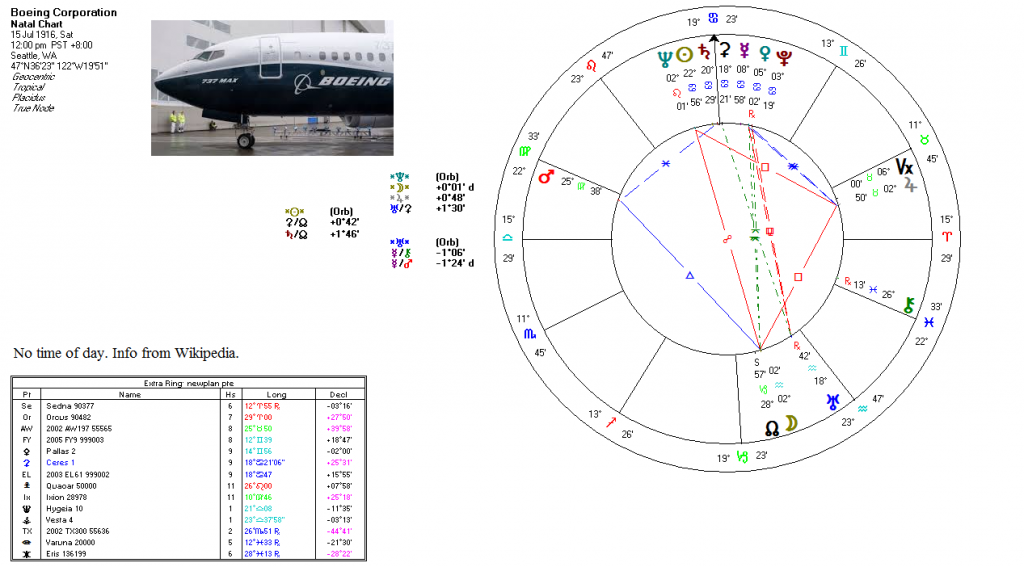 Boeing’s story has been a classic tale of one man’s vision and industriousness amounting to huge success. Boeing is now described as:

“…an American multinational corporation that designs, manufactures, and sells airplanes, rotorcraft, rockets, satellites, telecommunications equipment, and missiles worldwide. The company also provides leasing and product support services. Boeing is among the largest global aerospace manufacturers; it is the fifth-largest defense contractor in the world based on 2017 revenue, and is the largest exporter in the United States by dollar value. Boeing stock is included in the Dow Jones Industrial Average.”

And that brings us to the purpose of this article: This is not simply a look at a great American company fallen victim to a corrupted system and the rush to profits. It is reflective of and has carry-on effects to a wide sector of American industry and society. As the bolded items in the quote point out, if Boeing suffers a major downturn, it could be a catalyst for a larger downturn in the US economy and failures in industry both nationwide and overseas.

Looking at Boeing’s chart, then, we see the great wealth the corporation has produced, even without a time of day and not knowing the exact lunar position. We see the Sun conjunct Saturn, showing focus and determination, both sextile to Mars, which is a strong wealth-building combination, planning long and for the future. In addition, Jupiter is sextile to a Venus/Pluto conjunction, another combination that can produce great wealth.

Being an aerospace company, one would expect Uranus to be well-placed and strong, but it is not. It is in Aquarius, the sign it rules, but it is in the bottom of the chart and without a major aspect to it. There is a quincunx to Ceres, and sesquisquares to Venus and Pluto, but that is all. If we knew the time of day we would probably find Uranus aspecting one of the angles, but all we can do is guess at this point. I have not had time  to attempt a rectification.

However, looking at the midpoints for Uranus, we find Ura=Mer/Mars, described partially by Ebertin as, “An exciting surprise, a decision made in haste, action without deliberation. – The danger of catastrophes.” And therein lies the crux and source of Boeing’s current problem: they made a hasty design decision based in production schedules without thinking through the possible consequences and it resulted in two disasters. And these relate to a specific model of their aircraft – the 737 MAX 8.

Since the two accidents mentioned at the start – the Lion Air crash in Indonesia and the crash of Ethiopia Air 302 – all 393 of the 737 MAX 8 aircraft currently in service have been grounded worldwide until further notice. Over 5000 have been ordered. They are produced at the Renton facility in Washington state. The Renton plant employs around 10,000 people and has produced about 30% of the commercial planes that fly today. This is not an advertisement for the company, but to give background.

The problem that caused the crash of the two flights just mentioned is a trim system designed to keep the airplane from stalling at too steep a climb, called the MCAS (Maneuvering Characteristics Augmentation System). It had to be added because of the new fuel efficient engines that were added to the MAX 8, causing them to have to be moved forward on the aircraft. This caused the plane to rise too sharply during takeoff, and to give the plane a tendency to always nose-up in flight. So the MCAS was added to automatically compensate.

The problem was, the FAA was not notified of the engineering change, there were flaws in the design of it, pilots were not properly trained, the manual override wheels next to the pilots were not large enough to compensate if or when things went wrong, and the result we all now know. This has been thoroughly covered in a series of articles on moonofalabama.org. We won’t cover it here. What is of interest to us here, if possible, is the astrology surrounding the MAX 8. Actually, we have a chart for its maiden flight on 29 Jan 2016. The chart is below (bigger):

The maiden flight took off at 9:48 am from the Renton plant, which is next to the airport. The flight went well. But as a signature event for all other MAX 8 flights to follow, there were problematic midpoints in the chart, plus a t-square with Mercury/Pluto at the apex and a Uranus/Moon opposition at the base. Uranus rules control systems. Pluto is square the midpoint of the Mercury/Uranus square. It is described on the chart, along with another potentially troublesome midpoint. Yes, that flight went well, but everything for a maiden flight is going to be scrupulously checked and rechecked. Nothing will be left to chance. That is not the case in the thousands of other flights that have taken place since.

So, we have to ask the question: What was going on in the corporate chart of Boeing when the two crashes took place? The Lion Air crash with the Boeing chart is below (bigger): 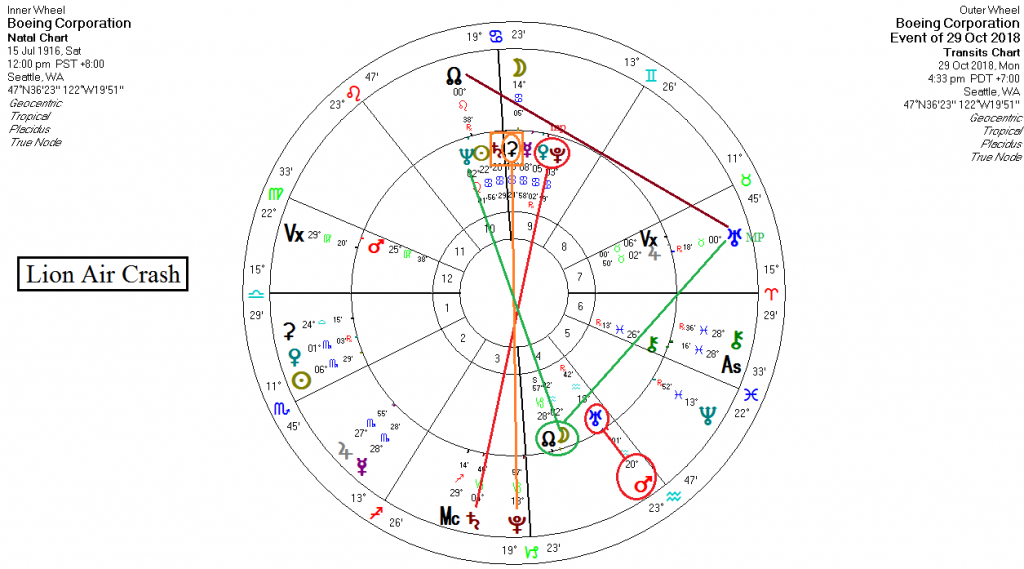 Transiting Pluto was opposite Boeing’s Ceres, showing a turning point for the company. Transiting Uranus was at the bending of the transiting nodes, showing the sudden change in relationships worldwide, but also linked in with Boeing’s Moon/Neptune opposition, which represented sudden forebodings and presentiments to the company. Mars was still in orb of its conjunction with Boeing’s Uranus – an ‘accident transit’ – remembering the Uranus midpoint for the company described before.

And lastly, Saturn was at the opposition to the midpoint of Boeing’s Venus/Pluto conjunction, showing a tragic loss. Actually, the combination is called, “A tragic love,” when it occurs natally or in directions. With transits it can describe a breakup or a very painful event in a relationship. It was certainly that for the employees of Boeing, since we are looking at transits to Boeing’s chart.

Then, there was the Ethiopia 302 crash five months later. That was the one that brought the present situation for Boeing to a head. The transits for Boeing at that crash are below (bigger): 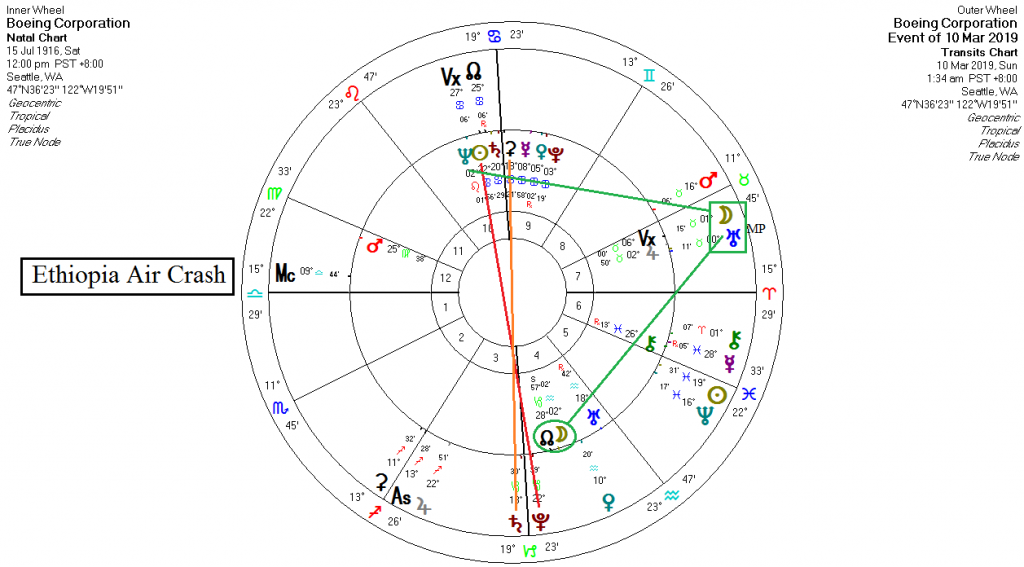 This time we find transiting Saturn opposite Boeing’s Ceres, with Pluto having transited to oppose the Boeing Sun. That marked the big turning point for Boeing. Transiting Uranus was at the midpoint of Boeing’s Moon/node conjunction: “Restlessness in the presence of others. – Sudden experiences with others…” We should think so. And with the transiting Moon conjunct transiting Uranus, they both activated the natal Moon/Neptune opposition in Boeing’s chart. We can probably be fairly safe in assuming that the Moon is close to the noon position in the chart. Even if the articles of incorporation were signed earlier in the morning the lunar degree would be little changed, or even an hour or two after lunch.

Where does that bring us, then? Looking at the astrology, with the two eclipses – one at 21° and the other at 24° of the Cancer/Capricorn axis – we know with a fair certainty that Boeing is going to be facing some very significant challenges from now through the first quarter of next year. Boeing’s Sun is at 22° of Cancer, so it has been caught by both of the eclipses.  And as of this writing, the company has just started a new progressed lunar cycle, with its progressed new moon, having been balsamic for the last few years. It will take a couple of years probably before all the dust from this settles.

Boeing’s engineers have applied a fix to the mCAS problem, but it has not been approved by overseas agencies. Boeing CEO Dennis Muilenburg has stated that he thought the planes would be flying again in October. That is wishful thinking if the overseas agencies have not approved the fix. If the situation drags on past October, the crisis would temporarily shut down production at Renton. For how long would depend on the approval process. The FAA has favored Boeing on the fix, but one would be right to be suspicious if one were to book a flight on such a plane if the European agencies have not approved it. There is quite a lot riding on the outcome of the certification process.

So, in answer to the question posed in the title of this piece, the short answer is, no. It’s the election cycle now in the US. Boeing Commercial Airplanes employs tens of thousands of people either directly or indirectly via the supply chain, which would be extensive. What is likely to happen is that obligatory and symbolic heads will roll at Boeing, the FAA would receive a shakeup, at least by appearances, there will be money thrown at the problem, there will be some cover-ups and before the damage to the company is too extensive, the problem will be miraculously solved. Boeing is one of those monoliths that is too big to fail. Trump will find some way to claim a win out of it. Does this sound all too cynical? Watch and see.

If Boeing were to collapse, if those 5,000+ orders for 737s were to vaporize – to the tune of ca. $280 billion – do we honestly believe that will be allowed to happen? Imagine the shock wave that would send through the nation. And, Boeing is the 5th-largest defense contractor in the world, not just the US. The US thrives on its defense industry. But this period is not going to be easy for Boeing. It will carry on into 2020, and the results will be economically savage for the company, from lawsuits, to loss of trust, cancelation of orders and so on. The Saturn/Pluto eclipse activations in the first of next year will be brutal. But the company will survive, with hard lessons learned (hopefully).

What we see already are things like Chinese airlines seeking compensation from Boeing for losses incurred from the grounding of the 737 fleet and delays of orders. Boeing is also facing mounting lawsuits from victim’s families and shareholders. Pilots are suing for career damage and for severe emotional and mental stress. It has already cost Boeing $5 billion in compensation. That figure is likely to grow. The crisis has already caused a risk to cooperation between US and foreign regulatory authorities. And this is on top of regional carriers being hard-hit by having to cut thousands of domestic flight routes because of the groundings. Canada has grounded the entire fleet at least until January of 2020.

What has happened with Boeing should be a big wakeup call for the nation, especially in the toll the present economic and political systems have exacted on health, safety and regulatory concerns. People especially to the conservative/libertarian side in politics are constantly going on about the oversized government, smothering regulations and so forth and the need to cut costs. But cutting costs and regulations also costs lives. We need sufficient government oversight in many areas, especially in industries where large-scale deaths occur in the event of accidents, such as the aviation industry. The FAA needs a renewed set of teeth. Boeing needs to reform its safety procedures, even if it costs time and money. Faith needs to be restored in what is overall the safest mode of mass transit worldwide.