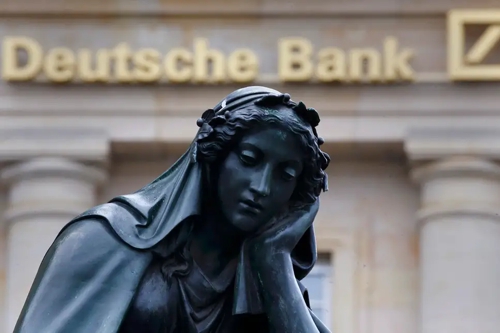 Following on from our previous article about Boeing and its woes, there is another multinational corporation that is seeing its fair share of troubles as well. This company, however, has the capacity to bring about a crisis that would rival the Great Depression in its effects and bring about the end of the neo-liberal financial order. We refer here to Deutsche Bank. It has also seen its fair share of scandals in past years, too. And now, it is hemorrhaging assets at a rate of a billion dollars a day. Europeans should be especially concerned, but then, no one escapes if Deutsche Bank goes down. 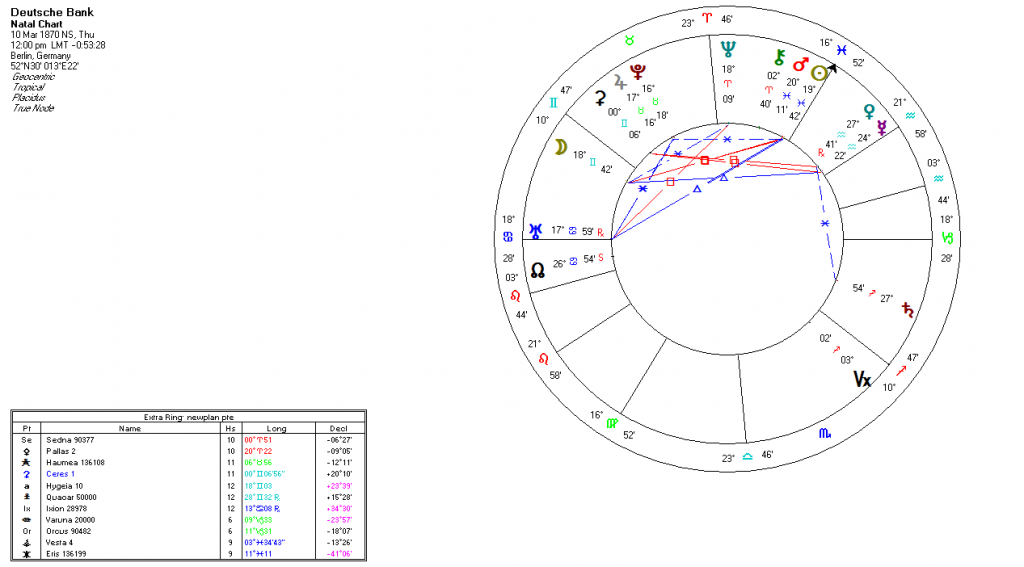 Before we get to the problems facing Deutsche Bank, a look at the chart will tell us how it got to its present state. Even without a time of day, the success of the bank is self-evident, starting with the Sun/Jupiter sextile, and with Jupiter conjunct Pluto. This is perhaps the ‘luckiest’ aspect one can have in a chart, and the same with the trine. With Pluto involved, that spells big luck, and this case, big money. If one wanted to start a successful and lucrative project, one would want to include that aspect in the chart somewhere, preferably with one of the planets ruling the Midheaven or on it.

Jupiter, in turn, is the midpoint of a Sun/Uranus trine, which gives an adventurous and humanitarian outlook. Deutsche Bank got its start prior to German unification as a specialist bank set up to promote German exports. It played a big part in making Germany the industrial powerhouse it is today.

We should note here that the Sun is conjunct Mars in the chart and Jupiter is the midpoint of a Mars/Uranus trine. The latter trine describes the bank’s connection with and positive influence on German industry. Mars trine Uranus in general points to scientific and mechanical aptitude. However, there is down side to it as well – it gives a tendency to gamble, and with Jupiter, no penny ante gambles, either. This will be an important indicator later.

In addition, we see a Venus/Saturn sextile, which gives a sound business sense (when the Mars/Jupiter/Uranus doesn’t override it), care with money and a steady march toward wealth. Then, the Moon is trine to Mercury, giving good public relations skills, good sales skills, cleverness and business acumen. An astrologer must have set this chart up for them.

On the more difficult side, there is a square between Uranus and Neptune, giving a revolutionary outlook, which in itself is not a bad thing. But it can also add to any sense of recklessness when the Mars/Jupiter/Uranus combination is activated. It is the aspect of the ‘Beat Generation’ and all that represented. It makes for highly independent and pioneering thinkers – that is, when it is well integrated in a chart. In general, it is with Deutsche Bank, but it has also caused them trouble.

The Pisces Sun can sometimes be problematic, too, and with the square to the Gemini Moon can produce a situation wherein the temperament alternates between stubbornness and being too flexible. There can be too many irons in the fire and a nature that can be easily seduced by the latest and greatest, especially if they can make a buck, deutschmark or euro from it.

With all the preceding in mind, Deutsche Bank, for all its recent troubles, is the 15th-largest bank in the world. It was listed on the NYSE in 2001 after 9/11. Up until then it had operated pretty much trouble free and had steadily expanded after WWII. We won’t go over the history here. But as an international, universal bank, it is operational in 58 countries, mostly in Europe, North America and Asia. Its business model rests on its ‘three pillars’ – the Private & Commercial Bank, the Corporate & Investment Bank (CIB) and Asset Management (DWS).

From an astrological perspective, then, when did the troubles start for Deutsche Bank? Interestingly, after it was listed on the NYSE in 2001, right in the midst of Wall Street. There is also a branch in Park Avenue. Is there a connection? Maybe. Probably. I don’t really know. That is not what is important here.

The scandals started in 2001, although the activity was going on before then, with their spying scandal, through to 2007. There have also been scandals such as the Libor scandal, the Dakota Access Pipeline, cartel charges in Australia, money laundering scandals, having played a role in the 2007-8 financial collapse, sanctions violations and more. In 2013 it had the dubious distinction of winning the Black Planet Award. So, what was happening astrologically through that period? The directions tell a story. The chart is below (bigger): 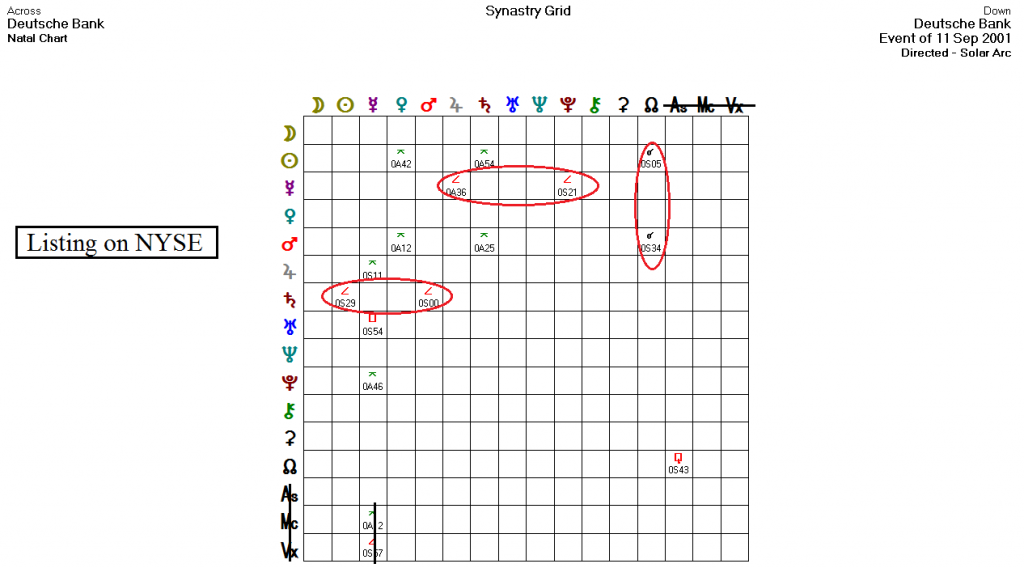 We have a median date of the 9/11 attacks on the chart. That was around the time frame when it was listed on the NYSE. Actually, it was a month later, because the 9/11 attacks interrupted the listing. Saturn had been activating the natal Sun/Mars conjunction, and thus the aforementioned trine with Jupiter and Uranus. Directed Mars and Sun were on the natal nodal axis, pointing to an aggressive change in its relationships, and on the north node, pointing toward new relationships. And a new direction for the company.  Directed Mercury was at the midpoint of the Jupiter/Pluto conjunction, detailing, “the desire to inﬂuence many people. – A propaganda campaign.” That period showed a clear change of direction for Deutsche Bank.

Deutsche Bank’s move to New York signaled a big uptick in its investment banking sector. That is where its major troubles have rested. With everything in the West now financialized and with regulations in the US headed toward zero, it would seem, Deutsche Bank played the market in a big way and accumulated a large batch of toxic debt. With the world now teetering on the edge of another critical financial crisis and with the bank – really the entire banking system – at risk, the CEOs at Deutsche Bank have seen the writing on the wall.

What the CEOs at Deutsche Bank are doing now is restructuring. In essence what they are doing is to completely do away with their investment banking, one of their three pillars. It was unregulated investment banking that caused the 1929 crash that brought on the Great Depression. The plan is to move all of their toxic debt into what is called a ‘bad bank’, separate from the main bank. Then, investors will be invited in to buy up all the toxic debt, with the bad bank eventually being closed. Problem solved, they hope.

That third pillar of the bank was set up in 2017, only a couple of years ago. The directions to the DB chart at the time were the Sun and Mars to contacts with Saturn, indicating an overly ambitious move. In turn, Pluto and Jupiter were directed to the DB Mercury, with Mercury ruling commerce in general, thus inflaming the effort. And, the Sun and Mars were being squared by the directed nodal axis, the south node of which was on the DB Moon, showing the ambitious change of direction. They are rectifying the situation now.

There is quite a lot we have to leave out here about the fortunes and misfortunes of Deutsche Bank and it would make quite a study in financial and corporate astrology. However the immediate question before us is, will Deutsche Bank fail, causing a worldwide financial crisis? Here is what I sense is taking place, in a nutshell:

To describe the problem in a word, it would be a financial instrument called a ‘derivative’. I don’t pretend to understand it. Derivatives are a dirty word in the public view of finance these days. It has not always been that way. In fact derivatives used to be a stable way of financial exchange, especially from the mid-1800s. If they are regulated, they work well. But the advent of the internet and algorithms changed all that. Along with deregulation of the financial markets, toxic derivatives have exploded. The problem with Deutsche Bank now is its exposure to roughly 49 trillion dollars in derivatives. Yes, the figure is correct. But in fact the problem is not confined to Europe. The problem is much deeper:

“…most of the largest “too big to fail banks” in the United States have very deep financial connections to the bank. In other words, the global financial system simply cannot afford for Deutsche Bank to fail, and right now it is literally melting down right in front of our eyes [that’s debatable, and not what the astrology shows]…and even though it has been hit by scandal after scandal, somehow Deutsche Bank was able to survive until now.”

And there is more:

“DB is heavily interconnected financially to JP Morgan Chase, Citigroup, Goldman Sachs, Morgan Stanley and Bank of America as well as other mega banks in Europe. The IMF concluded that Deutsche Bank posed a greater threat to global financial stability than any other bank as a result of these interconnections.”

Scaremongering aside, should people be concerned? Yes, actually, but not about one bank. That is simply blame shifting and distraction from what all the other banks are doing. It is the entire Ponzi scheme that we call our current economic system that is at fault. Why are the other banks mentioned not also a risk? In fact, they all are. If Deutsche Bank succeeds in their quest, though, it will be one less bank to worry about. The main problem would be if the system has a crash before they can sort themselves out. That is actually quite a strong possibility.

Deutsche Bank will be divesting itself of 18,000 of its current 91,000+ employees – one fifth of its work force – over three years. The biggest cuts will be in New York and London, most likely. Think on why that might be, given it is the heart of our current financial order. From all the preceding it would appear that Deutsche Bank is returning to its roots, as a German bank promoting German industry and exports. As to what its current astrology shows, the chart is below (bigger): 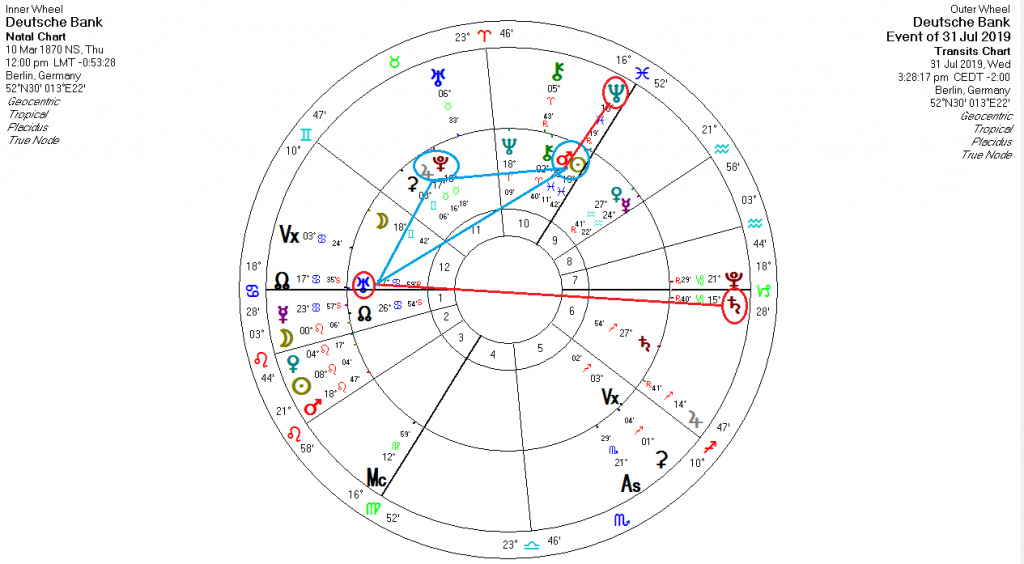 The biggest thing we see is the transiting Neptune to the DB Sun and Mars (uncertainty) and transiting Saturn opposite the DB Uranus (restructuring). Those two heavyweights are dampening the enthusiasm of the natal Sun/Jupiter/Uranus triangle. It definitely resembles a reorganization. The directions do no not show much. And without a time of day for the articles of incorporation, like Boeing’s chart, we do not know if this spells the end for the bank or not. We need a Midheaven degree to know that.

Unlike Boeing, though, the eclipses and the Saturn/Pluto conjunction next year will not be affecting Deutsche Bank. There is no activation of or direction by the ‘death axis’ (Mars/Saturn midpoint). In all, then, we simply need wait and see. This appears to be a greatly needed corrective phase for Germany’s biggest bank. Maybe then they can return to being a service bank, in the vein of their Pisces Sun with its trine to Uranus. Let’s hope they can pull it off.

Featured pic from The Evening Standard