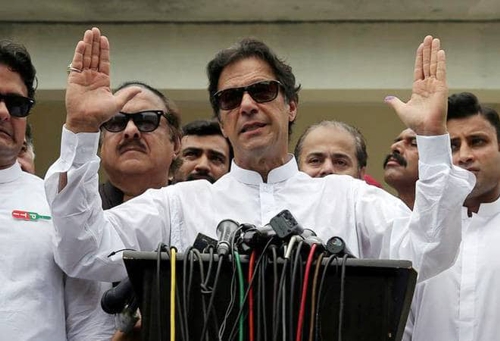 When Art. 370 was revoked by India, the reaction in Pakistan was both swift and expected: It was loudly and roundly condemned. Continuing with our discussion of the troubles in Kashmir, we will begin to parse the partition of India and Pakistan astrologically and why there has been so much animosity at times between the two nations in the next section. But in this one we want to look at the situation for Pakistan. The differences between India and Pakistan from the start lie primarily along religious lines, India being predominantly Hindu and Pakistan predominantly Sunni Muslim. There were other reasons behind the partition as well, which would be shown in the charts.

As to why the two nations have different charts, when India was partitioned and the Muslim and Hindu states were separated, Lord Mountbatten (the British Viceroy and Governor General at the time) wanted to attend the ceremonies of both nations, so he opted to attend the ceremony of Pakistan’s the day before and then travel to India for the ceremony on the 15th. He was to remain in India to take up the post of GG thereafter, hence his opting for Pakistan first. Jinnah took the oath of office on the morning of the 14th, thus sealing the independence of Pakistan. The chart is below (bigger): 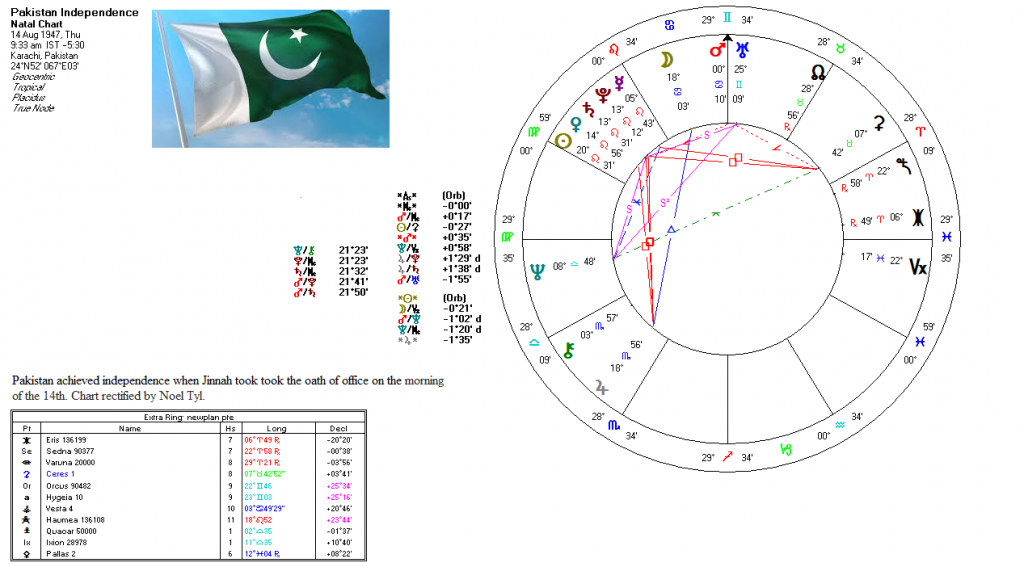 We don’t have the space here to go through the specifics of Pakistan’s history through the chart. And in this case it doesn’t really matter. In the chart, the troublous journey of Pakistan is shown by the wide Mars/Uranus conjunction straddling the Midheaven. Both of the main axes are conjunct Aries points, marking Pakistan as a nation that has the capacity to affect the world view. It has certainly done that.

The Mars/Uranus conjunction is also concurrently the midpoint of the Ascendant and the Midheaven. It gives a tendency to violence, inflexibility, upsets, accidents, drastic and violent measures, etc. It also gives great independence and extraordinary achievements when it is properly harnessed and focused. The other midpoints are shown on the chart. Mars also forms a midpoint with Uranus and Eris, further accentuating those effects. Keep in mind that since both Pakistan and India had their independence and were partitioned a day apart, that latter midpoint also applies to India.

Then, there are the midpoints to the Sun, representing leadership in general, and we find the ‘infection axis’ there – Sun=Mars/Neptune – showing a general weakness, discontent, the undermining of strength and/or health and the possible dissolution of the body. That also applies to India. Pakistan was originally in two parts – East Pakistan and West Pakistan – and was eventually split, with the East going on to claim its own independence and forming the state of Bangladesh in 1971, due to a war with India. Bangladesh was previously known as East Bengal. East Bengal was routinely discriminated against by West Pakistan after partition, which led to strong calls for Bengali independence.

In general, though, Pakistan has the Sun in Leo, as does India, and both have the Sun/Jupiter square, showing optimism as well as excessiveness. There is a triple conjunction of Venus, Saturn and Pluto, which can lead to asceticism, a love of solitude, a disciplined nature, which in the case of Pakistan has often been military in nature, but which can also lead to alienation and separations. That conjunction occurs in the 11th house, which points to Pakistan’s alliances as well as its national hopes and wishes.

Pakistan has been rocked periodically by coups, assassinations and violence since its formation. For a thumbnail description:

“Pakistan’s political history since independence has been characterized by periods of military rule, political instability and conflicts with India. The country continues to face challenging problems, including overpopulation, terrorism, poverty, illiteracy, and corruption. Pakistan is a member of the UN, the Shanghai Cooperation Organisation, the OIC, the Commonwealth of Nations, the SAARC and the Islamic Military Counter Terrorism Coalition.”

The fact that both India and Pakistan gained their independence at the same time, essentially, goes far toward explaining their astrological similarities as reflected in their animosity toward each other. Both of them have a rather interesting septile triangle in their charts – Venus=Uranus/Neptune – which gives an extreme sensitivity, which can work well in the case of artists, but in the case of nations can point to strange alliances (on the surface) and peculiar expressions of friendships.

To illustrate the last point, Pakistan has had strong relations with China for years. China is the largest supplier of arms to Pakistan and is its third-largest trading partner. The two share strong military ties. They share Pakistan’s northern border, which is in the disputed region and which has major importance because of India’s unilateral actions with the Art. 370 revocation. There is another part to this, too.

China and Pakistan have signed a treaty of friendship (1956) and recently signed a Memorandum of Understanding on the Pak-China Economic Corridor project in 2013 (CPEC), which is a key part of China’s B&R Initiative, linking China to Pakistan’s port at Gwadar. This will give China easy access to the Indian Ocean, much to the displeasure of India and Washington. The annexation of Jammu and Kashmir by India has now put CPEC on the fast track – an unintended consequence of the action, and one which will raise security concerns in the region. It has also had the effect of moving Pakistan and China even closer. China and Pakistan set up an administration to push the project forward three days after the revocation of Art 370.

The fact that Pakistan and China look set to deepen their relations now poses some rather interesting questions about geopolitics in the entire region of South Central Asia, which includes India, Afghanistan (in fact, all of the ‘Stans), Pakistan and China. And then there is Iran.

The two main Western powers (the US and UK) have been trying their best to prevent the union of the greater Eurasian region. And in particular their focus has been on Russia, China and Iran. Most especially, they want to disrupt or set back the development of China’s B&R project. India’s actions on Kashmir will not help their cause if it serves to push Pakistan and China closer together. Then there is the little problem of the US military presence in Afghanistan, which is also meant to serve as a hedge against China’s and Russia’s advances in regional integration.

If the arc between Pakistan and China is completed and security is firmly in place, meaning the Chinese and Pakistani militaries are there protecting their interests, then India will be isolated to the north unless they can engage in meaningful dialog with both Pakistan and China. This, too, will have unintended consequences.

CPEC will strengthen Pakistan’s economy at a time when it sorely needs it. It will increase its security. It will give China a direct overland route to the Indian Ocean, thus bypassing somewhat the need for its sea routes through the South China Sea and Malacca Strait. CPEC also opens a possibility for a rail and road link directly to Iran via Pakistan. Iran and Pakistan have a free trade agreement, since 1999. It will give China a trade opening it did not have before. None of that will play well in Washington, London and New Delhi.

Then, there is the possible problem of radicalized elements on both sides of the Kashmir divide. And there is a divide, as mentioned previously. Jammu is mostly Hindu, and Kashmir almost wholly Muslim. The Kashmir valley is to the north of Jammu. Ladakh is to the east and is sparsely populated. The biggest population bloc in Jammu-Kashmir is in Kashmir, at just over half. If there is a large influx of people from India to the north it will not sit well with the Muslim population there.

And then, Pakistan has been mediating between the US and the Taliban to try to bring an end to hostilities in Afghanistan. Pakistan has 60,000 troops on the Afghan-Pakistan border to prevent insurgents from entering Afghanistan from Pakistan. Afghanistan has been caught in the middle of tensions between Pakistan and India since partition. In general, Afghanis have a favorable view of India, but India has been excluded from peace talks by Pakistan. The Trump administration has accused Pakistan of not doing enough to fight terrorism, and has cut funding to Pakistan. With the revocation of Art 370, there has been talk of moving those 60,00 troops to the border of Pakistan and Kashmir-Jammu. For the time being, tensions are high between Pakistan and the US, and as a result peace talks are stalled. Trump may not get his ‘win’ of withdrawing troops from there before the 2020 elections.

The US and the Taliban are said to be in the final rounds of negotiations for a peace deal. There has been speculation that Modi’s action on Art 370 was meant to keep the US and Pakistan from growing closer, as Pakistan’s influence in the peace talks has been essential. The Pakistanis are said to have a strange sort of relationship with the Taliban, shown by the fact that without Pakistan, there would have been no peace talks. The revocation is seen by Barkha Dutt, Indian journalist (see previous link), that India is aiming to derail the negotiations, which would elevate Pakistan’s standing in Afghanistan after the Americans pull out and the Taliban are reinstated in power. It is speculation, of course, but also a possibility. India and Pakistan both have interests in Afghanistan and they eye each other off there suspiciously as to their respective motives. But a Pakistani ambassador has stated that there is no linkage between the peace talks and Kashmir.

To wrap this section up, then, Pakistan’s response/reaction to Kashmir carries a big weight. The revocation has caused acceleration of the CPEC, was a gift to the Pakistani military hardliners, who have always been hawkish on Kashmir, and has in effect opened some doors for Pakistan. That is shown in the directions and transits to the Pakistan Independence chart, below (bigger): 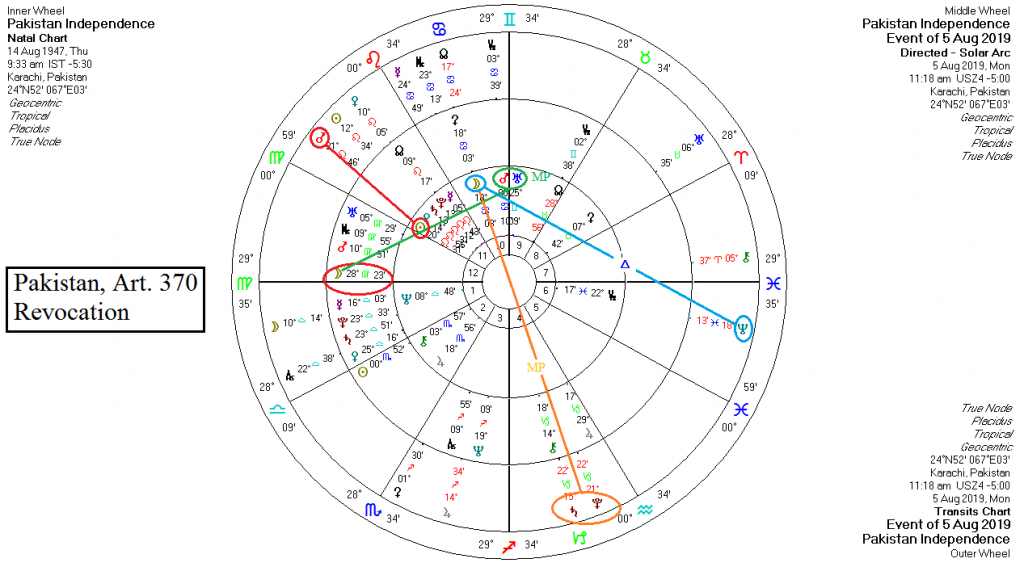 Pakistan has an intercepted 10th house, with Gemini as the main ruler and Cancer intercepted. Transiting Saturn and Pluto formed a midpoint with Pakistan’s Moon on the day of the announcement (melancholy, coldness, “the tragic destiny of a woman”). It was a depressing day for the Pakistani leadership. The directed Moon, however, was on Pakistan’s Ascendant and is also directed to the Mars/Uranus midpoint and the Midheaven. This latter gives the desire to do something very big, and can also mean accidents or violence involving girls and women. There have been warnings about the latter.

But the big initiatives have been two: the peace talks with the Taliban and the push forward on the CPEC project. Lastly, there was a transit of Mars over the Pakistan Sun, showing the stirring of the pot this act has provoked. And was it a dream-come-true for the hardliners? It would appear so, with transiting Neptune trine Pakistan’s Moon, the latter ruling the 10th (sitting government). And since it is an intercepted house, that can also mean a hidden government, or one behind the scenes. In the case of Pakistan, that would be their military.

In closing this piece, the revocation of Art. 370 by India may seem on the surface to put Pakistan at a disadvantage, but in the long term it has the possibility to stir Pakistan to some very significant achievements in the not-too-distant future. We’ll see how it pans out. But India will get no rest, long-term or ultimate satisfaction out of this move. Modi may have thought he pulled off a coup with this one, but in a few years he may well be looking back and thinking, “Well, it seemed like a good idea at the time!” Continued in the next segment…