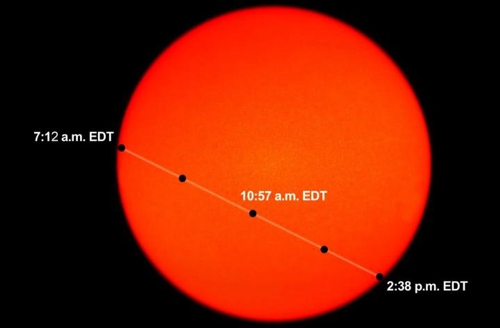 There is a special eclipse that takes place the day before the full moon – the 2019 transit of Mercury across the face of the Sun. Yes, it is classed as an eclipse, as Mercury ‘occults’ part of the Sun’s face, even if it is a tiny dot – giving us yet another speck of wisdom. This will be a member of the Series 6 of Mercury transits, and the first one in that series since 1973, which saw the closest approach to the center of the sun in that series. (Note: The featured pic is not of this transit. That one is below in the article.)

The chart for the transit (below, bigger) shows the greatest moment of eclipse at 15:30 UT on Mercury’s north node (19 Sco 06). If this was the moon it would be nearly a total eclipse, as there is only just over a minute of separation from the center of the Sun. It will not be that close again until 2187, but in a different series. So, if you want to see a once in a lifetime event (unless you saw the last one in ‘73) get out the telescope and be ready. You can find it live HERE. But what will it mean for us, especially coming the day before the full moon? 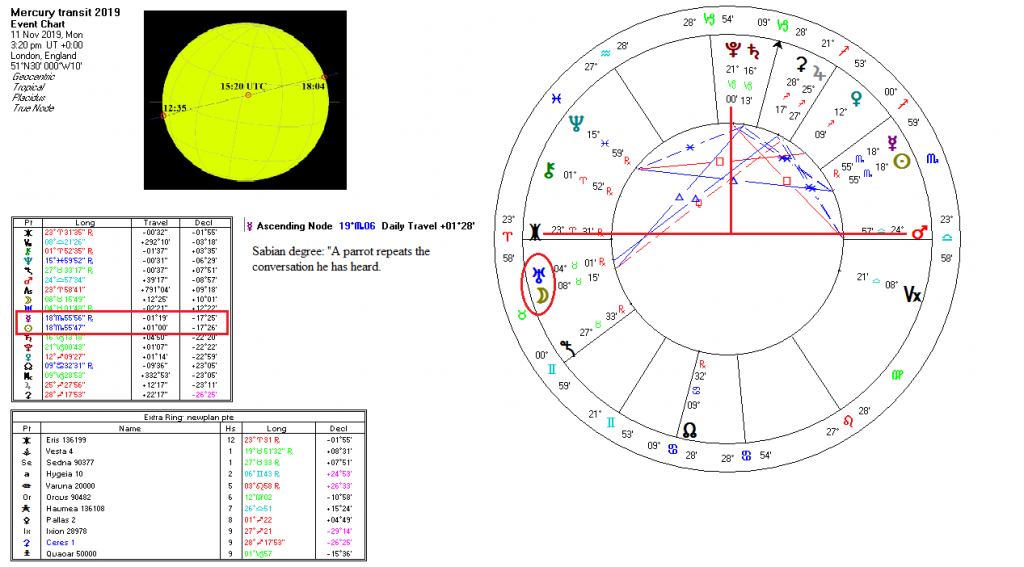 There is only a trine and sextiles to the transit point. Thus it will not have the impact of the full moon of Scorpio the next day, but it will tie into it and augment the effects. This full moon promises a bit of revelation and opens to a new pathway of understanding. We will get hints of that in the discussion in the Scorpio letter. The trine to the eclipse point applies to Neptune, giving an expansive view, broadening intuition and insight. The sextiles to Saturn and Pluto give a true investigative spirit and the capacity for concentrated and penetrating mental work. But there is something more, too, and it relates to the Sabian symbol for the degree of the transit:

When we couple that symbol with the other aforementioned aspects, we see the possibility of manifestations such as whistleblowers, for instance. And the field for that sort of thing is ripe in nations like the US and UK, where there are currently investigations taking place into leaders, past and present. That is enhanced by the t-square with the Mars/Eris base with Pluto as the apex planet. This marks an energy that will forcefully change our point of view.  It also fits with the Scorpio nature of the transit — revealing that which has been hidden.

Other than these factors, the aspects and import of the transit will be much the same as that for the full moon. The main difference will be the lunar conjunction with Uranus in the transit chart, above, signalling the breaking of old patterns and shedding light on the past, further giving us a new perspective. Expect the unexpected with this transit, and for certain revelations to come out. We certainly could use them!

Other than that, I have reprised some material from an old article (2003) I wrote a previous time we had such a transit, which you can use for reference. The true transit times in UT are shown in the pic below. Enjoy the transit! 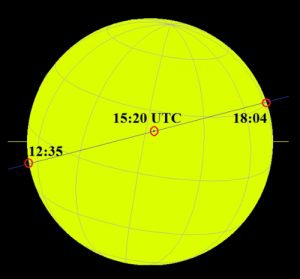 “A new 2nd-order cycle of Mercury has just taken place[i]. As you may know, there have been two other 2nd-order cycles of other planets that have recently commenced as well – those of Mars and Venus. These 2nd-order cycles are social cycles and do not concern individuals so much, except insofar as we are all affected by the societies in which we live. Put another way, these cycles are more connected with the operation and unfolding of groups of all sorts. This cycle of Mercury lasts for 65 years[ii] and brings about many changes at its inception, but those changes may not be so obvious to the casual observer, for Mercury, as we shall see, is one of the most mysterious and occult planets in our solar system, and it presides over no less than our transformation from the human to the divine, ushering us all eventually to membership in the Kingdom of Souls.

Some background on Mercury would be appropriate at this point. Mercury was the Roman god of commerce, travel and thievery and was the counterpart of the Greek god Hermes, the messenger of the gods[iii]. Scientifically, we know less about Mercury than any other planet except Pluto, due to the close proximity between Mercury and the Sun (thus making it very difficult to observe). It is the second-densest body in the solar system after Earth and is probably the most iron-rich body in the solar system. It has a very thin, wispy atmosphere of sodium, but it actually has water in the form of  ice in the shadows of protected craters on its surface. It exhibits what is called orbital resonance, meaning the spin of the planet (its day) is coupled with its orbit at a ratio of 2:3. The length of its day is 88 Earth-days. These figures are significant to esotericists and give many clues as to how Mercury works. This orbital resonance is due to Mercury’s closeness to the Sun and gravitational pulling by the Sun. In esoteric literature Mercury and the Sun are often said to be one[iv].

Mercury was called the ‘Son of Wisdom’[v] and it was the planet sacred to Gautama, the Buddha[vi]. This latest Mercury cycle [there has been one since this writing] commenced during the Wesak period, the Festival of the Buddha. The north node of Mercury was in the sign of Taurus, the birth-sign of the Buddha, and it is these nodes which determine the commencement of the 2nd-order cycles. Mercury was called the ‘Watchman of the Sun’[vii], the ‘Sustainer of Dominions’, and was the ‘strongest of all the vigilants’[viii]. It is equated with the archangel Michael and was also associated with Raphael, one of the ‘4 Holy Ones’ the Lords of Karma, the guides of humanity. It is called the first of the celestial gods, the god Hermes, to which is attributed the invention of and the first initiation of men into Magic. It is ‘budha’ (from the root word ‘budh‘–to enlighten or to know) as distinct from Buddha (the Enlightened One), wisdom, enlightenment or ‘reawakening’ in the divine science. Mercury was always known as the god of secret wisdom.

Mercury receives seven times as much light as the Earth. Its corresponding metal is mercury (from the alchemical system), its color is yellow or gold, its day is Wednesday (Woden’s day) and is said to be personified omniscience. It is said to heal the blind and to restore sight, mental and physical [subjective and objective]. It is more mysterious still than Venus, the Earth’s alter-ego, is identical with Mithra, is the perpetual companion of the ‘Sun of Wisdom’ and is the ‘leader and evocateur of souls’[ix]. Mercury, as Hermes, conjoined with Venus (Aphrodite) on the psycho-spiritual planes gives humans the name ‘Hermaphrodite’.

Mercury rules the liquid (active) light of the kundalini fire, whereas Mars rules the latent aspect of that serpent. Serpents were always equated with wisdom in occult literature and it is small wonder that kundalini is called the ‘serpent fire’, because that fire restores the inner, spiritual sight, reveals the ‘Wisdom of the Ages’ to the astounded initiate and liberates the consciousness that was bound before by the confines of physical existence. As the ‘divine intermediary’, Mercury carries the messages between the poles (soul and persona) faster than the speed of light[x]. It is the expression of the dual aspects of mind as it mediates between higher and lower[xi]. As such, then, it is the star of conflict because it reveals to the mind the duality of life–the ‘Self and the ‘not-self’. In so doing, it produces a steady pull between that which is perceived and the consciousness who perceives it. As such, too, it is thus the major planet of relationships because it ‘engineers’ the interplay between the lower self and the higher self, between our Earth and the Sun, and between our Earth and the major constellations which condition us. Lastly, the students of the planetary school on Mercury are called ‘The Sons of Aspiration’ or ‘The Points of Yellow Light’[xii], for those who might wish to use such descriptions in their visualizations. Now, that’s a hard act to follow in anyone’s book.

This tiny little planet which is nestled so close to the Sun has a very profound significance to our  own little world. Orthodox astrology does not accord Mercury with nearly the significance it deserves, probably because Mercury operates more in the realm of consciousness than it does in mundane events. However, to the occultist, the inner planes determine the causality of the manifested universe. Thus, though it may not appear so on the surface, Mercury works potently behind the scenes as one of the truly great ‘movers and shakers’ in our solar system, shaping consciousness on many worlds and thus ensuring that the plan of God manifests itself in line with divine providence. Mercury is said to be far older than the Earth and it thus acts as an older brother or mentor to the lord of our planet[xiii]. Along with Mars and our Earth it forms a trinity of planets of rare importance…”

2 Replies to “The Mercury transit of 2019: background”