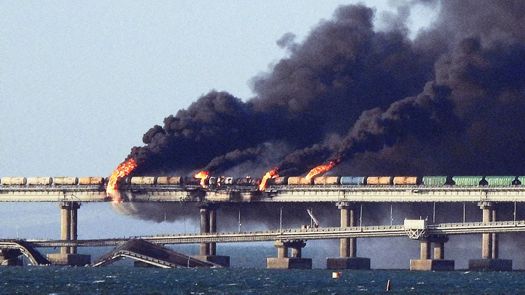 On the morning of the full moon, 10 Oct 2022 Russian missiles began to rain down on Ukrainian infrastructure. And then the lights started going out. The conflict in Ukraine has just intensified. After the Ukrainians (by their own admission) tried to blow up the Kerch Strait Bridge the Russians finally decided enough was enough. That was their red line. Those missiles were the first wave of what will probably be continuing strikes again Ukrainian infrastructure. It will also hasten the end of the war. For more, read on… 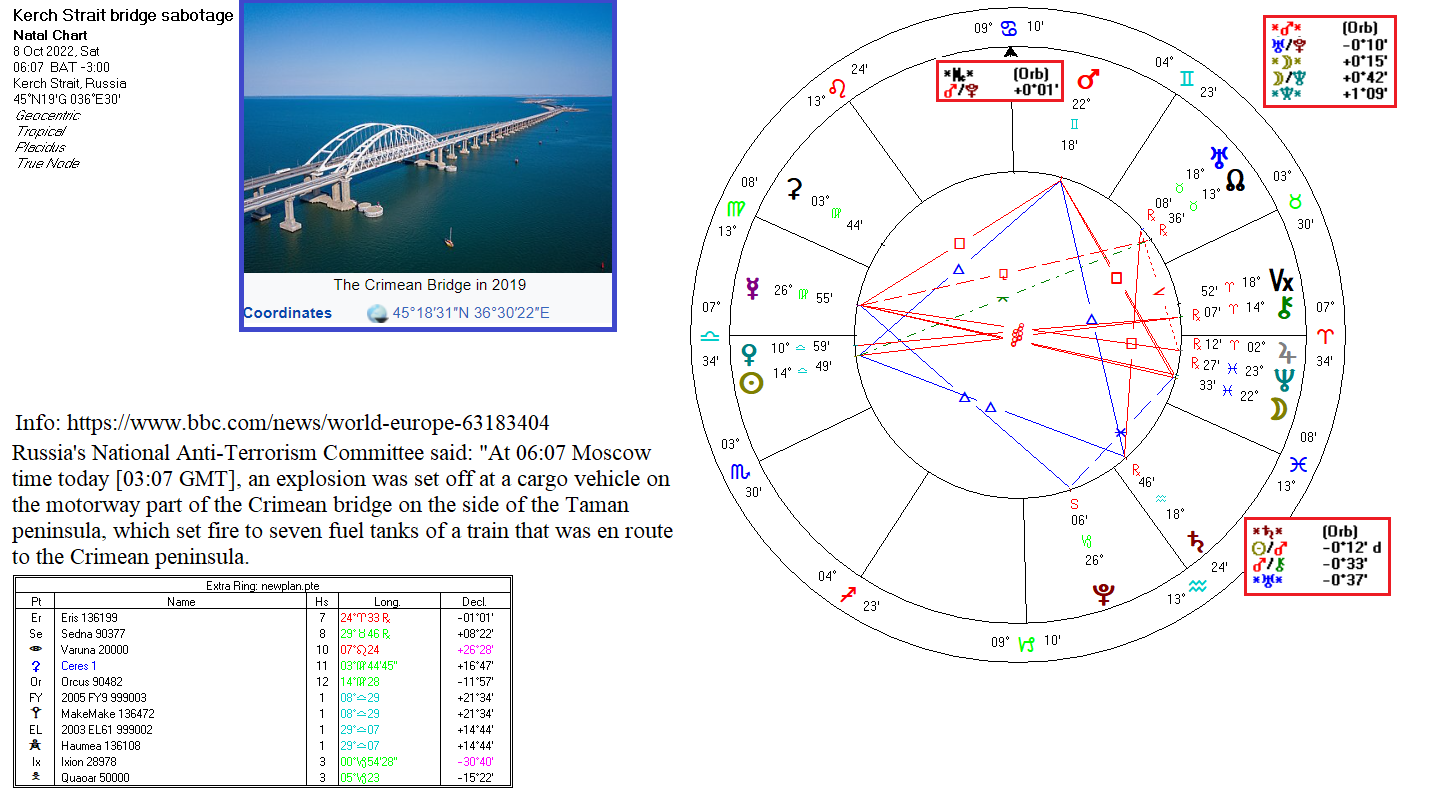 Overall, a quick glance at the chart without the midpoints is undescriptive of a major event of sabotage. There were a few indicators, though. We see Pluto about to make its direct station in the 4th house of the chart (sabotage of infrastructure). It was in a trine by Mercury from the 12th house (covert activity related to transport), Mercury ruling the 12th house. Mercury in turn opposed the Moon/Neptune conjunction in the 6th house (military and services in general). Neptune rules the 6th house, suggesting covert military activities. And Mars squares the opposition from the 9th house (foreign actors), completing a t-square, showing a belligerent action. Uranus squares Saturn (4th house ruler, infrastructure), showing a possible sudden disruption of services.

What we don’t see are the major hard aspects between Mars, Saturn, Uranus or Pluto that would indicate such a large explosion and the collapse of major infrastructure. Instead, Saturn is supported by trines to by the Sun and Mars, making a grand trine, and perhaps that is more indicative of the outcome – the bridge still stands and is fully functional, which we will get to. Instead, the midpoints complete the story and tell the tale, outlined as follows and shown on the chart:

Mars rules the 7th house, the perpetrator(s) of the act. Mars was involved in all three of the midpoint structures. All the bolded points apply especially to the end result of the attempted destruction of the bridge and what came after.

The Saturn midpoints are of particular importance, too because it rules the 4th house (infrastructure). The italicised, bolded text is particularly descriptive of the failure to completely destroy the bridge. To the Russians this was an act of terrorism against civilian infrastructure. To Ukrainians the bridge was a legitimate military target, used to transport military men and materiel to Crimea. To NATO it was a symbolic and strategic objective together, the bridge being a hated symbol of Russia’s success against NATO regarding Crimea, which NATO wanted to claim in order to deny the Russian navy access to the Black Sea and thus the Mediterranean Sea. Its destruction was also meant to be an embarrassment to the Russians and especially to Putin, as well as a PR victory for the West.

The Midheaven (MC) shows the public face of the event and the geopolitical implications. It should be considered in full. The sabotage was an operation (as in surgical, covert strike), an intervention by a ‘Higher Power’, which can be read in two ways – an ‘act of God’ or miscalculation stopping the total destruction of the bridge spans, or the control of NATO (Washington and London) over the actions of the Ukrainian saboteurs. The unusual capabilities point to the special training involved in executing the sabotage. And finally, there was not enough power (explosive charge) or it was improperly placed to get the job done.

The question then becomes, who instigated and carried this out, and what comes after? Information just divulged to The Grayzone show that the British MI6 had hatched a plan to blow the bridge back in April of this year. It was a secret plan codenamed ‘Audacious’:

“Britain’s evident interest in planning such an attack underscores the deep involvement of NATO powers in the Ukraine proxy war. At almost precisely the time that London reportedly sabotaged peace talks between Kiev and Moscow in April this year, British military intelligence operatives were drawing up blueprints to destroy a major Russian bridge crossed by thousands of civilians per day.

The roadmap was produced by Hugh Ward, a British military veteran. A number of strategies for helping Ukraine “pose a threat to Russian naval forces” in the Black Sea are outlined. The overriding objectives are stated as aiming to “degrade” Russia’s ability to blockade Kiev, “erode” Moscow’s “warfighting capability”, and isolate Russian land and maritime forces in Crimea by “denying resupply by sea and overland via Kerch bridge.”

It was an audacious plan, sure enough. The plan was to blow the main span of the bridge, the overpass into the Sea of Azov, which would have blocked shipping for at least some weeks to and from that sea. By that point the Sea of Azov was controlled by the Russians. But also by then the Russians had already established a land route to Crimea, so even then blowing up the bridge would not have affected the Russian campaign too adversely. It would have been more on the order of an inconvenience. But there are caveats in that.

There is a gas pipeline from Russia to the Crimean peninsula via the bridge. Had the explosion taken down the entire bridge the pipeline would have been severed, disrupting gas supplies to Crimea, this affecting energy supplies there for some weeks or months, depending. Completely severing the bridge would also have delayed transfer of equipment and supplies and caused bottlenecks in transport, as well as leaving supply routes vulnerable to shelling and attacks by Ukrainians. As it turned out, the attack on the bridge was an own goal by Ukraine and MI6, the reason for which we will cover shortly.

But was the bridge really all that important? Symbolically it was, a point of Russian pride. But in terms of logistics, the bridge was not essential at all. So, someone went to all that trouble, thinking they had done something really crippling to the Russians, which may have been the case just over a year ago when there was no land route. Instead, the result was the event just poked the Bear in the eye, and now we see the results. It was a case of, “Nice bridge you got there. Be a shame if something happened to it.” Oh dear, oh dear! In reality, the event was no biggie, except in the informational war.

The attack on the bridge was executed by a truck bomb, which had the explosives hidden in rolls of plastic. There were quite a lot of logistics involved. The explosive load originated in Odessa, moved by sea to Bulgaria, crossed the Black Sea to Georgia and Armenia where it was loaded on one truck, then transferred to the sacrificial truck in Russia. The driver of the latter truck was unaware of what his cargo contained. He was not a suicide bomber, as some comment had surmised. He was an innocent civilian. But given the explosive load originated in Odessa, that city is now a prime target for Russian occupation and eventual annexation. It was a Russian city since 1792 anyway before being attached to Ukraine.

The explosives were detonated by remote control, timed to the nearest confluence of events – close to the span, with a trainload of diesel fuel passing on the train tracks opposite. They would have liked to have done the deed on Putin’s birthday, which was the day before. Regardless, obviously someone had knowledge of cargoes and scheduling.

But the confluence of events did not exactly coincide, as shown in the Saturn/Uranus=Sun/Mars midpoint outlined above (premature actions) hence the failure to completely blow up the bridge. The bridge was operational again in 14 hours after the attack. Road traffic now flows in both directions, though with delays. The trains commenced cargo traffic the same day. Passenger train traffic resumed a few days later. The collapsed spans are being quickly repaired.

Five Russians, three Ukrainians and an Armenian were arrested in connection with the event. The Russians face charges of treason. Along with the others they also face charges of terrorism and murder. Four civilians were killed in the attack. Three of those were travelling in a car that was beside the truck when it exploded.

The Russian Investigative Committee were quick to apportion blame:

“The head of the Russian Investigative Committee, Alexander Bastrykin, confirmed face-to-face with Putin that Terror on the Bridge was carried out by the SBU – Ukrainian special services. Bastrykin told Putin, “we have already established the route of the truck, where the explosion took place. Bulgaria, Georgia, Armenia, North Ossetia, Krasnodar… The carriers have been identified. With the help of operatives of the FSB, we managed to identify suspects.”

The FSB would have had information that something was about to happen, as they were quick to round up the suspects, probably having had them under surveillance. Perhaps that was one reason there was some comment from the Ukrainian side that the event was a staged false flag by the Russians. More to the point such statements are more in the nature of deflecting blame.

What was the purpose of the attack on the Crimean Bridge, then? Speculation abounds. One theory is that it was meant to goad Russia to covert tit-for-tat sabotage or nuclear response to enable Western powers to label Russia as a state sponsor of terrorism. More likely is it was simply a military objective and a point of revenge for Ukraine and NATO for Crimea having voted to return to Russia.

In fact the PACE organization has just adopted a resolution designating ‘the Putin regime’ as a terrorist organization, but for reasons to be explained shortly. That resolution is a step being pursued by Europeans with the intent of further isolating Russia and (the Ukrainians hope) getting Russia thrown out of the UN Security Council. That is unlikely to happen.

The Ukrainians had foreknowledge, as they had already produced a commemorative stamp of the event, which appeared mere hours after the event, showing explosions on both ends of the bridge span. There were celebrations in Ukraine at news of the event (translate from Ukrainian). More important than Ukrainian and NATO gloating, though, was the response of the Russians. In Russia, the event was seen as the final straw, their ultimate red line. The response was swift and came within 24 hours of the event.

The very day the bridge to Crimea was sabotaged, this guy was appointed commander of combined operations in the Ukrainian theatre: 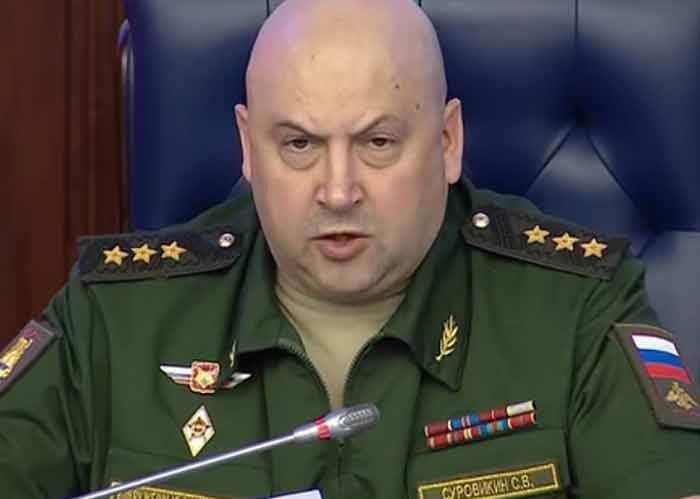 Meet ‘General Armageddon’, as his colleagues have nicknamed him. He is also known as ‘Cannibal’. His real name is Sergey Surovikin, a very experienced and hard-nosed general, having cut his teeth in a spetsnaz unit in the Afghan-Russian War and the Chechen wars. The Western press portrays him as being extraordinarily brutal, which is a case of the pot calling the kettle black.

But in a case that is surely one of irony or poetic justice, with the Ukrainians wishing Putin a happy birthday with their sabotage of Putin’s bridge, the day before Smiley’s birthday (above), missiles began to pummel Ukraine’s essential infrastructure, especially its electrical infrastructure. Surovikin’s birthday was three days after the Crimean Bridge event. The Ukrainian civil war just took a more serious turn. Continued in the next post…

Featured pic from The Atlantic