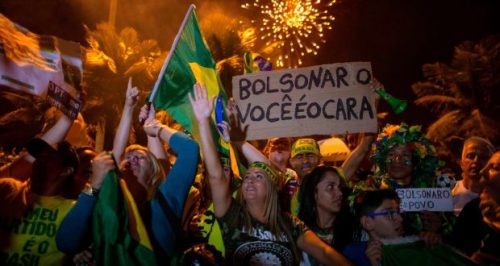 In case you haven’t heard, elections were just held in Brazil. It was a landmark election for a number of reasons, which we will get to. Voter turnout was high. The man who won the presidential bid, Bolsonaro, defeated the challenger, Haddad, by 10 percentage points – a resounding win. Bolsonaro is controversial, to say the least. What may not be apparent is that Haddad made very significant gains in popularity after the first round of the election. In the first round he only polled at about 30%, whereas in the 2nd round he came in a 45%. But the election, in key respects, was a sham. Wait! you say…

The people of Brazil voted fair and square. They voted for an end to corruption, economic relief and an end to the general upheaval they have seen in recent times. In that respect, they did succeed, according to the campaign promises made by the winner, Bolsonaro, and the final vote count. But, promises do not equate with facts on the ground, and in that election we saw similarities with his win that we have seen with other far right candidates in the past couple of years. And, if we think that the election really reflects the attitudes of the Brazilian people, consider the following:

“…a record 31 million votes were ruled absent or null and void. No less than 46 million Brazilians voted for the Workers’ Party’s candidate, Fernando Haddad; a professor and former mayor of Sao Paulo, one of the crucial megalopolises of the Global South. The key startling fact is that over 76 million Brazilians did not vote for Bolsonaro.”

The Brazilian people now have quite a lot in common and in sympathy with the American public. We’ll touch on why in a bit. But the point of this post is not to look at the man, but to examine what happened and what we might expect out of it and into the near future. 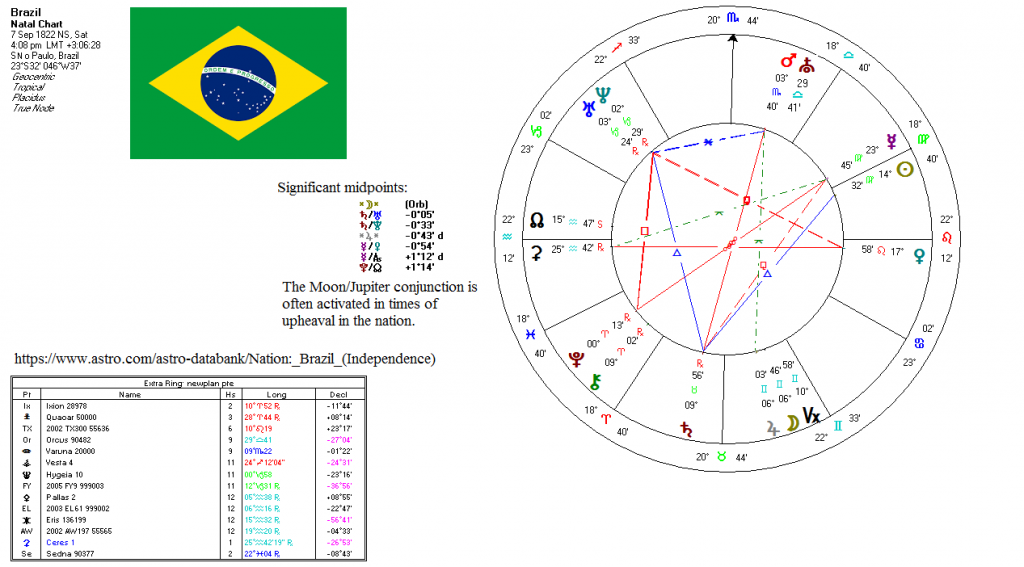 For the Brazilian elections, I use the independence chart, set for 4:08 PM, (bigger) which forms a good working chart for Brazil. It shows all the coups (1889, 1930, 1964 and the 1989 elections), as well as the recent fire at the Brazilian museum. We won’t go over them here, but there is a common factor, and that relates to the Moon/Jupiter conjunction in the independence chart, which is normally quite an optimistic aspect. However, it is also a barometer for what goes on in Brazilian society. It reflects the public mood, as well as ruling (via the Moon and Jupiter) the military and services (6th house) and the public desires and parliament (11th house). So, it is quite an important indicator, and this election cycle proved no different. That conjunction sits in the 4th house, which is the land, housing, infrastructure and political parties in opposition to the sitting  government. As to the present elections, the election chart shows the same directed Mars at the IC that we saw at the museum fire (appropriate, really), with transiting Mars squaring that conjunction. It also shows a solar arc by Uranus to that conjunction, indicating the upset. But more revealing, we have transiting Neptune opposite the Brazilian Sun, completing a midpoint with a direction by Ceres approaching the Brazilian Sun, indicating a turning point for Brazil – more importantly, an election that was won by deception and vote tampering. The Sun indicates leadership in general. And that brings us to Jair Bolsonaro, the winner of the election. 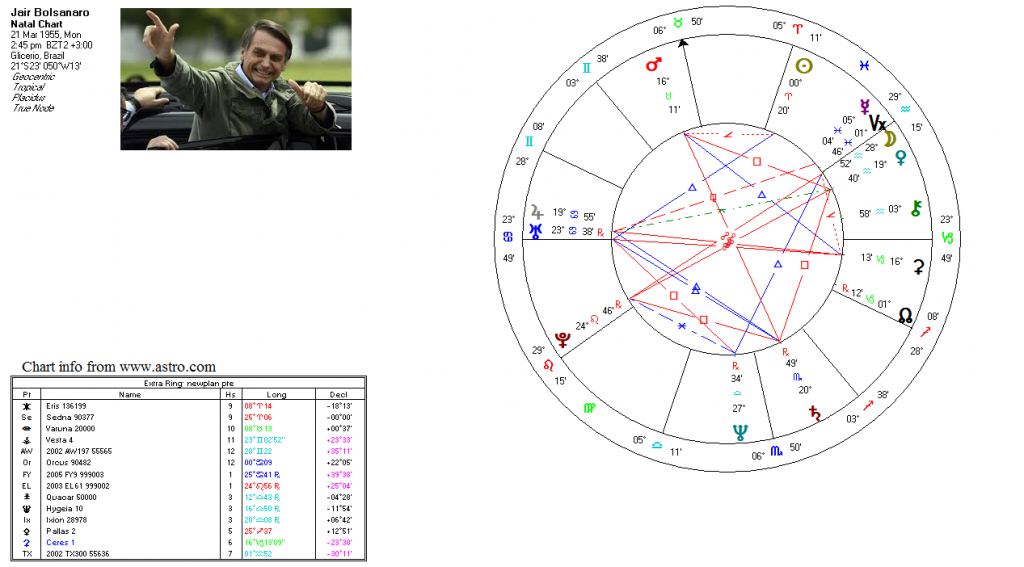 Jair Bolsonaro was born 21 Mar 1955 at 2:45 PM in Glicério, Brazil. (bigger), the son of Italian immigrants, from my current neck of the woods. There are several things that immediately stand out about his chart. We’ll only touch on a few of the more important facets here. The first is the Aries Sun/Aquarius Moon combination, which tends toward a politically reactionary position, most favorable to capitalism because of the benefits it brings. It also gives an interest in people and some magnetism with the same, but in general sees them as sheep rather than as equals. It also gives a relatively good opinion of oneself, which in Bolsonaro’s case is further enhanced by the Mars/Saturn opposition. Venus lies within a degree of the midpoint of that axis, which is a cold placement and essentially gives a loveless disposition, although great loyalty to people to whom he deems deserving. If this seems a very negative assessment at the start, then consider some of the statements he has made in the past and the positions he has taken on social issues:

This sort of talk sounds very similar in some respects to other far right leaders. I don’t think we need to say whom. He was a captain in the military under the regime of the military dictatorship, which was dissolved in 1989. That dictatorship was installed by a coup in 1964, and was widely hated by the Brazilian people. Their vote for Bolsonaro this time around shows their extreme frustration with the way the country has been run in the decades after the overthrow of the dictatorship. It was a protest vote, much in the vein of the election of Trump in the US. But what will it ultimately gain the average Brazilian? A further look at Bolsonaro’s chart and history might give some clues.

Bolsonaro has been a lackluster parliamentarian. He has overseen the passage of only two laws in the 27 years he has held the post, even though he has put forward at least 171 bills for debate. He has changed political affiliation numerous times. He was described by the officers over him when he was in the military as being ambitious and aggressive. He is certainly independent, with Uranus conjunct his Cancer ascendant, and with Eris square his meridian axis, the latter marking him as a firebrand. He has Orcus conjunct his south node, which would tend to indicate the more severe aspects of his relationships with the public, probably coming from his past, and his talk of harshly punishing ‘miscreants’. So, even with Cancer rising, which gives his public appeal, he will go against the grain of establishment rules, and this is perhaps the appeal he has with voters. His voter base, like Trump’s is largely among younger, white males and there is a decided gender gap there, with only between 18 – 27 % support among women. He garnered significant support among evangelical voters, who comprise roughly 40% of the Brazilian population, and due to the dirty politics and smear campaign his supporters ran during the electoral campaign – which really was fake news and slanderous – he won the ‘Christian right’ vote by a large margin. I covered all that in the Scorpio article, so we won’t go over old ground.

What we have with Brazil, then, not to cast too dark a light on things, is a public that is fed up with the way their government has been run for the past decades. This is much like what we see in other parts of the world, really throughout much of the West. With Bolsonaro, Brazilians will get change, but if he holds true to form and to his past leanings, what they will get will at least lean toward more authoritarian government, more violence and a meaner society, at worst a military dictatorship. This can change, though, and the people have it in their hands to change it, just as do people in other nations suffering under similar fates. And, they may get their chance in just over a year, if the working chart for Brazil holds true. At that point our favorite Moon/Jupiter conjunction will receive solar arcs from both Uranus and Neptune, as well as by Venus. At the same time, Mars will be squaring the horizon of the chart by solar arc, possibly indicating a constitutional crisis, or another coup. I would not be at all surprised at either. This will also depend on what happens with the midterms in the US next month. If Trump finds himself to be a lame duck, the talk of attacking Venezuela will die away, and South America should find itself to be more at peace. We’ll hold that thought to be a probability, but Brazil has significant internal problems to overcome, as well as the ever-present guiding hand behind the scenes from ‘O Norte’.

Bolsonaro may find himself in difficulty soon, as he will be in a weaker position astrologically by then, with some quite difficult placements (Feb 2020). I’ll leave that one for Brazilian astrologers, but I would have to say that Bolsonaro’s presidency will be beset by problems, as people will be wanting relief and positive change, and quickly. We would want to see the swearing-in chart for his administration, yet to come to get a complete picture. However, Bolsonaro is only a figurehead. The more important consideration would be the Brazilian chart and the administration chart, the latter when available. He was selected by the vetting parties precisely because he is not a strong leader. I would have doubts that he will be able to deliver on his promises to the extent he has stated.

But, trust that Moon/Jupiter conjunction in the independence chart. It has been an indicator for every major change in government since the Brazilians declared their independence. I don’t expect that to change. For those Brazilians who were hoping for a better electoral outcome, keep the faith, and stay active and focused. You will have another chance at changing things for the better before too long. And you never know, even Bolsonaro may yet find his more humanitarian side. Yes, I know, it is about as likely as seeing snow at Bondi Beach at Christmas. But, with Uranus and Neptune setting the scene with the direction to the Moon/Jupiter next year, anything can happen. As always, the outcome is in the hands of the people. There is nothing like winning out over a major crisis to make us stronger. Viva o Brasil!