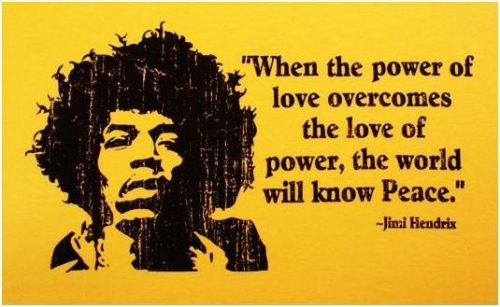 Recent events have brought up consideration of a rare conjunction of two of the ‘heavy hitters’ in astrology and planetary lore – Saturn and Pluto. OK, so the conjunction of the two is not rare at all, taking place roughly every thirty years, but their conjunction in Capricorn only takes place centuries apart, hence its rarity. So, with the first conjunction coming at the start of next year, it will mark big and fundamental shifts in the world, as we will see in the paragraphs to follow.

Why is the conjunction of these two planets in Capricorn so important, we might well ask? The answer goes to what Capricorn represents: the culmination of worldly efforts and ambitions. Capricorn, operating via Saturn also represents crystallization as a result of culmination. In effect, once one has achieved the desired result in Capricorn, any further effort has the effect of wasted effort, mistakes made and good money thrown after bad, as it were. In other words, Capricorn represents the peak, the limit, after which one can go no further in terms of expansive effort, unless that effort is directed at spiritual discipline. What is called for after such material attainment is a period of consolidation, i.e., shoring up the gains made.

Capricorn also is the natural ruler of the 10th house (achievement and the pinnacle of effort), and once Saturn transits over the Midheaven in one’s chart, one should turn one’s attention toward consolidation instead of further efforts forward. The law is immutable, as Saturn would suggest.

But Saturn also represents control, while Pluto represents power, and the two together make quite an energetic statement. They show either a very controlled use of power, or an explosive and uncontrolled release of the same if misapplied. In another extreme it can also show as a block of the normal outflow of subconscious forces. The combination in Capricorn normally points to the use of power in a material way, or it can show itself in profound occultists. It can also show itself in mass deaths of a karmic sort, as in wars, mob violence or in mass murder. We recently had two examples of the latter, unfortunately, as Saturn is now within only a few degrees of its full conjunction with Pluto. (article and chart)

Given that Pluto has a cycle of 248 years, it was last in Capricorn from 1762 to the beginning of 1779. Pluto has the effect of shattering the established orders of the time when it appears in Capricorn, IF those orders are no longer suitable to human progress. Probably the most famous event to take place during the afore-stated period was the American Revolution, which began in 1775. That started a wave of revolution throughout Europe and the Americas in the decades to follow. The monarchies of the world and the Church were put on notice. It signaled a marked period of political upheaval. It was the period of The Wealth of Nations, the Cook voyages in the Pacific, Catherine the Great in Russia, and various and sundry wars. But Saturn did not join Pluto in Capricorn during that period.

What do we see in common with all these periods?

In true Capricorn fashion, then, we have culmination and then decline. What can we realistically expect this time around? What we are seeing is the collapse of the dominance of the West and the furthest expanse of the ‘Empire’, meaning the furthest extent of the financial and military control of world trade by the US. That control is rapidly being whittled away. And once again China and the Far East are involved. Italy is involved, too, and looks to be re-establishing its links with the old Silk Road, but in a modern way. Having said all this, the conjunction does not signal a specific date in history, but rather the start of the evolution of events that change the path of world history. And there are similarities between the 1518 conjunction and the one about to take place. The 1518 chart is below (bigger): 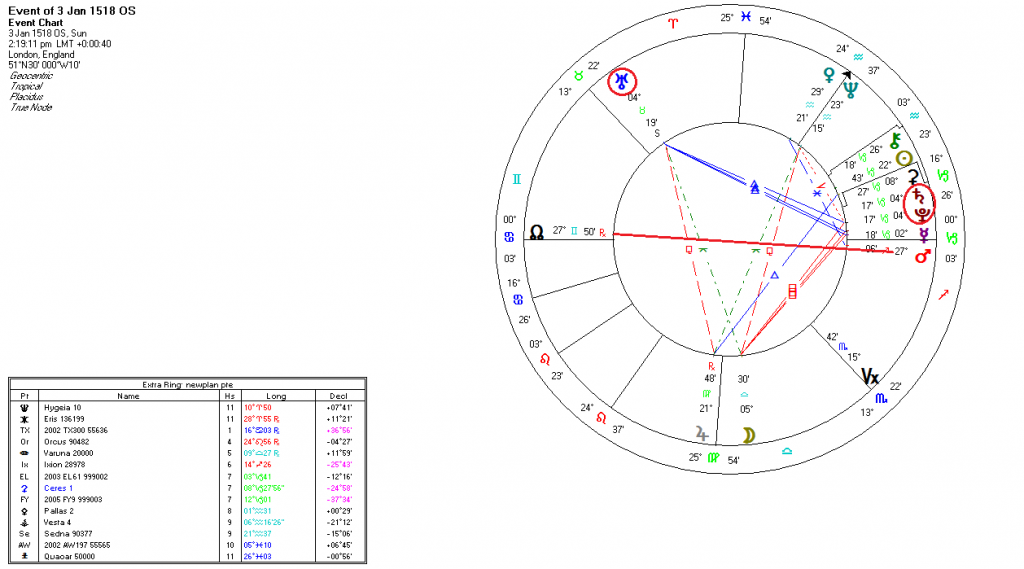 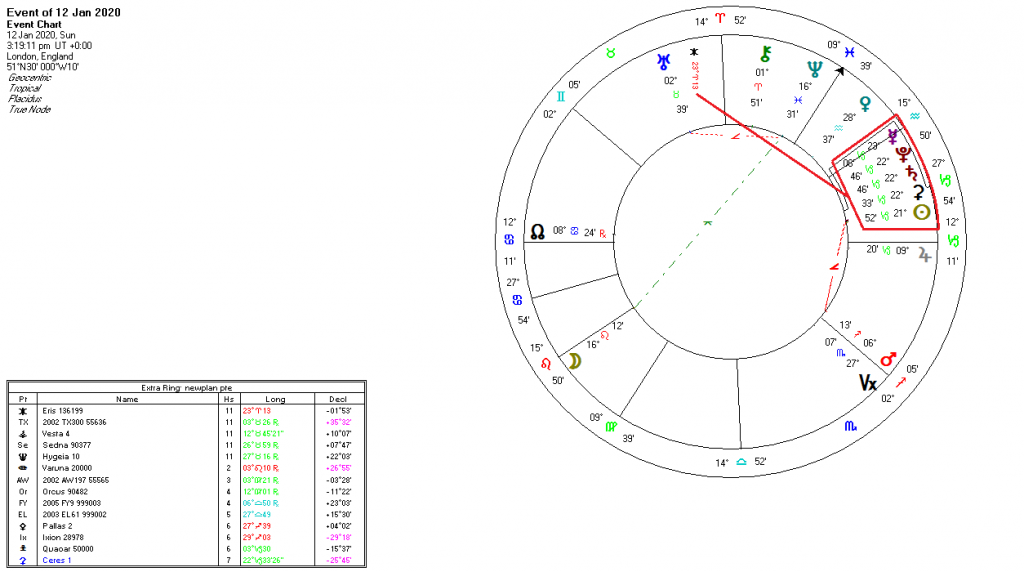 We also have a stellium in Capricorn, but much tighter, involving the conjunction, the Sun, Ceres and Mercury and also with Jupiter in the early degrees of Capricorn, trine Uranus in Taurus. The latter indicates the expansive nature of the economic changes to come, even though initially conditions are likely to be unsettling. Note in both charts Ceres is involved with the conjunction, indicating a turning point in world history. However, there is a new twist with the current conjunction: Eris is square the conjunction, and the square is close, from Aries. This conjunction is really going to shake things up, and if it is any indication along which directions those bumps in the road might come, we have only to look at recent events and the transit of Saturn as it approaches the 2020 conjunction.

When Saturn entered its shadow period (the period when a planet transits the zodiacal extent of its retrograde phase, from the retrograde to the direct stations) on 22 Jan, that date was the eve of the coup attempt on Maduro with the much-hyped aid convoy. Since then there has been a continuing and growing sense of frustration on the part of the coup planners. As a result, they have been sending special forces to Puerto Rico and Columbia near the border with Venezuela, turned off the power for days, and a terrorist cell backed by them has been arrested in Venezuela. It has the markings of a color revolution in the making. If there is to be an attempt at some sort of military intervention in Venezuela, we can probably expect it between now and 30 April, because after that, with Saturn being retrograde, it will be more difficult to push plans forward. Saturn rules ambition, and in its retrograde phase it becomes more difficult to manifest one’s ambitions.

Since 22 Jan there has also been the Huawei incident. In addition, there was also the withdrawal from both the US and Russia (the US first) from the INF Treaty, as well as some terrible natural disasters and killings. But there has been more. Since Saturn entered the shadow period the Brexit drama in Britain has reached a critical stage. Trump has gone so far as to recognize the Golan as Israeli territory, against international law. The Syrians have vowed to take it back. The Russians have started to bomb positions in Idlib in Syria. We see, then, there are many volatile situations in development that could precipitate into a crisis.

In closing, Capricorn represents all that is best and worst inn humanity. It represents the depths of materialism and the heights of spiritual attainment. And with Saturn together with Pluto there, what it presents to us are the ‘karmic chickens’ either coming to roost or laying golden eggs. The past decades have seen obscene grabs at wealth with the neo-liberal economic system, one that has set human advancement back and openly promoted selfishness, in the sense that “Greed, for lack of a better word, is good.” It is that which will meet its timely and welcomed end as the ruling economic system, and not too soon, to be replaced by…who can say?

What we are likely to see is a return to some form of semi-socialized economic model. But that, too, is going to involve big shifts in geopolitics, the way we view our environment, our relations with each other and so forth. It will also be the end of empire, at least for the present period. Empire as a model of world governance is a system that is seeing its last days. And there are two nations in particular where empire still holds sway – the US and the UK. Brexit is a signal of things to come, as is de-dollarization. The UK maintains its empire financially through its secrecy locations, and the US through its dollar dominance. And both are under threat now. It all comes down to a quote from a great philosopher: “When the power of love overcomes the love of power, the world will know peace.” We’ll watch those spaces.