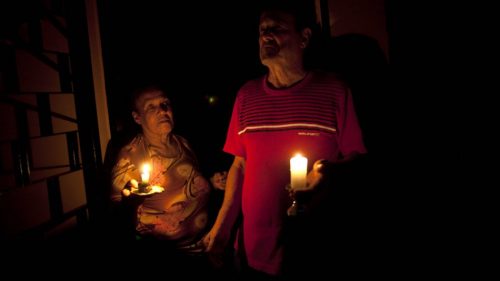 Venezuelans have seen better days, that’s for sure. And at 4:00 local time on 7 March this year, someone turned out the lights in Venezuela, nationwide. It was reported as an infrastructure problem in the corporate press. Seems there was a little problem at the Simón Bolívar hydroelectric plant, and the lights stayed out for days. It wasn’t some little glitch. The Maduro government claimed it was a cyber-attack from the US. The corporate press blamed it on Maduro and mismanagement. It was then a matter of he-said-she-said and rhetorical back and forth. Meanwhile, Marco Rubio spilled the beans, as did Eliot Abrams, in what turned out to be a real comedy of errors and what the evidence points to as sloppy covert operations. It would appear Venezuela’s power outage was a case of a ‘Plan B’ gone wrong. More on that a little later.

The chart for the power outage is below (bigger): 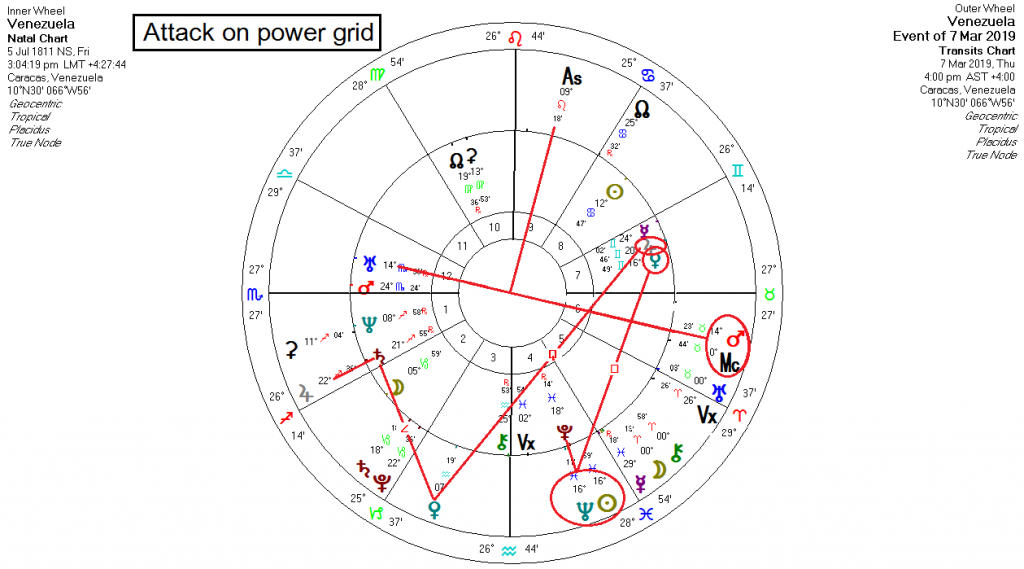 As far as power outages go, these things happen, and sometimes on a big scale. As far as the astrology goes, was it a simple outage, a technical/maintenance problem at Simón Bolívar, or was it a bona fide covert op aimed at destabilizing Venezuela? If the latter, it appears to have failed.

From the chart, the power grid is ruled by both Uranus (electricity) and the 4th house (infrastructure). In the case of Venezuela, the ruler of the 4th house is Uranus. Attacks and open attackers are ruled by Mars and the ruler of the 7th house, whatever sign is on that house cusp. Covert attackers are ruled by the 12th house and its ruler. At the time of the blackout, Mars was transiting opposite Uranus, showing the suddenness of the event and the likelihood that it was an attack. Was it from outside?

Foreign actors are ruled by the 9th and the 12th houses. Open hostility from foreign actors is ruled by the 7th house. In the case of covert activity we would have to look at both Pluto and the 12th house. The 12th house ruler for Venezuela is Venus, which also rules the 7th house. At the time of the outage, transiting Venus was semisquare Saturn and sesquisquare Jupiter, with Jupiter and Saturn being in opposition. The Jupiter/Saturn opposition weakens the will of the nation and makes it difficult to see a way forward. From the reading, and ignoring the planet involved (Venus), one could read the transit as an enemy of the state (either open or secret) hitting the country where it is weakest.

But Jupiter was transiting Venezuela’s Saturn on the day of the outage, which would appear to counter the effects of the Venus transit. However, the transits of both of those planets also points to the excessiveness of the response and ramped up rhetoric. Saturn rules the media and commerce for Venezuela. On top of all that, though, there were transits of both the Sun and Neptune to Venezuela’s Pluto on the day, and square to Venus, which more directly points to covert activity. Neptune is one of the rulers of covert activity. There was probably activity against the power grid from within and from without the country. The combination of Sun, Neptune and Pluto points to a “tragic deception or illusion’. If we add Venus to the mix, then we have still another level of meaning, which points to seductive thinking and impressionability. The events of the past days will be used to political gain by Maduro, who is now calling for the government ministers to resign, for instance, in order to ‘organize to better protect the country’. That may or may not be his real intent.

Given all the preceding then, was this a ‘Plan B’ of the ongoing coup attempt against the government, or a simple lack of maintenance and poor infrastructure? The astrology certainly points to the possibility that it was an attack. But before jumping to conclusions, power outages are common in Venezuela, and they are often blamed on sabotage. Infrastructure has especially suffered due to the financial pressures on the nation in the past few years. But there have been a couple of strange twists in this story.

On the day of the blackout, Marco Rubio tweeted about the blackout that the backup generators at the airport had failed. This was three minutes after the power outage had occurred. How did he know the generators had failed? And so soon after? Eva Bartlet, activist and independent journalist, called him out on it, saying, “Your timing is interesting, you stooge.” Interesting, yes. Then, it later emerged that there had been plans for several years to hit the power grid in Venezuela:

A key to Chavez’s current weakness is the decline in the electricity sector. There is the grave possibility that some 70 percent of the country’s electricity grid could go dark as soon as April 2010. Water levels at the Guri dam are dropping, and Chavez has been unable to reduce consumption sufficiently to compensate for the deteriorating industry. This could be the watershed event, as there is little that Chavez can do to protect the poor from the failure of that system. This would likely have the impact of galvanizing public unrest in a way that no opposition group could ever hope to generate. At that point in time, an opposition group would be best served to take advantage of the situation and spin it against Chavez and towards their needs. Alliances with the military could be critical because in such a situation of massive public unrest and rejection of the presidency, malcontent sectors of the military will likely decide to intervene, but only if they believe they have sufficient support. This has been the pattern in the past three coup attempts. Where the military thought it had enough support, there was a failure in the public to respond positively (or the public responded in the negative), so the coup failed.

There was no watershed moment, as was hoped. The El Guri dam complex produces some 70% of Venezuela’s electricity. When a power grid such as that goes down it has to be brought back in stages and is a slow process, as many Americans and Canadians will remember from the 2003 Northeast blackout. It was up to a couple of weeks before power was fully restored to all areas serviced by that grid. In another gaffe, exposing himself, Rubio tweeted that a transformer had blown up at the ‘German dam’, causing one of the three total blackouts in three days.

“Today another transformer explosion at the German Dam in Bolivar State caused another massive blackout,”

It was originally a man named Germán Dam, who published the information about the explosion of the transformer at the El Guri dam. Rubio quickly tried to cover his tracks, claiming it was a mistake made in haste, but was only further mocked. And then, there were the Russian pranksters who tricked Eliot Abrams into exposing himself, by posing as the president of a Swiss bank. And Pompeo is no less comedic in his blatant attempts to explain things away and blame everything on Maduro. But an even clearer indication of what was to come and the purpose behind the blackouts was provided by the self-declared interim president, Juan Guaidó, after the failed aid convoy on 23 Feb, returning to Venezuela just days before the first blackout.

Seeking political capital from the blackouts and to stir opposition to Maduro, Guaidó called for a “state of alarm” to authorize the delivery of international aid. He has also called for a military intervention into Venezuela to topple Maduro. Guaidó had promised Mike Pence prior to the coup attempt that half of the high level officers in the military would defect and turn the military against Maduro. He seriously miscalculated. In fact, the setbacks and blunders that have taken place can only be laid squarely at the feet of Washington. Instead, support for the Bolivarian state continues, and strongly, if not for Maduro. Local militias have been formed in the event of a foreign military intervention. It is doubtful there will be any sort of military intervention in Venezuela.

Back to the original question, then, were the blackouts caused by poor maintenance, mismanagement and lack of infrastructure, or was it a planned attack? The reader can decide. But the US and other actors have a history of cyber-attacks on foreign installations and on foreign infrastructure. And Trump has just pulled the restraints on cyber warfare. The timing is interesting with that, too. The Mars/Uranus opposition by transit in the chart preceding also points to a cyberattack, Uranus representing tech. On the other side, Maduro does need to pay more attention to his infrastructure, should the financial pressures allow for it. The ongoing coup attempt will be long.