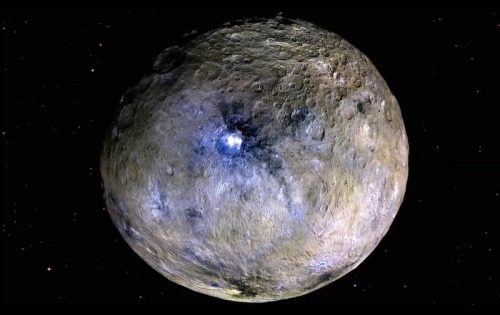 There is more to the little world Ceres than meets the eye, both astronomically and astrologically considered. Ceres was long considered to be the largest asteroid in the main asteroid belt, between Mars and Jupiter. But now evidence is emerging that little Ceres may not be an asteroid at all, and also that her origins may have lain farther out in the solar system than her current home – much farther out. And as it turns out, Ceres has more in common with Pluto than simply her mythology. The ancients knew more about the worlds that orbit our sun than they let on.

Ceres is actually more similar in her composition to Pluto than she is to the asteroids. And that brings up many opportunities for re-interpreting how Ceres works in a horoscope. There is more to Ceres than home, hearth, bread, fertility and motherly relations. But first, a little astronomy and a deeper look at mythology.

Given recent events in the UK in the past few months with the Brexit struggles, there is a rather interesting connection between Ceres and the UK: Ceres was discovered on the very day the UK was founded, on 1 Jan 1801. The discovery chart is below (bigger): 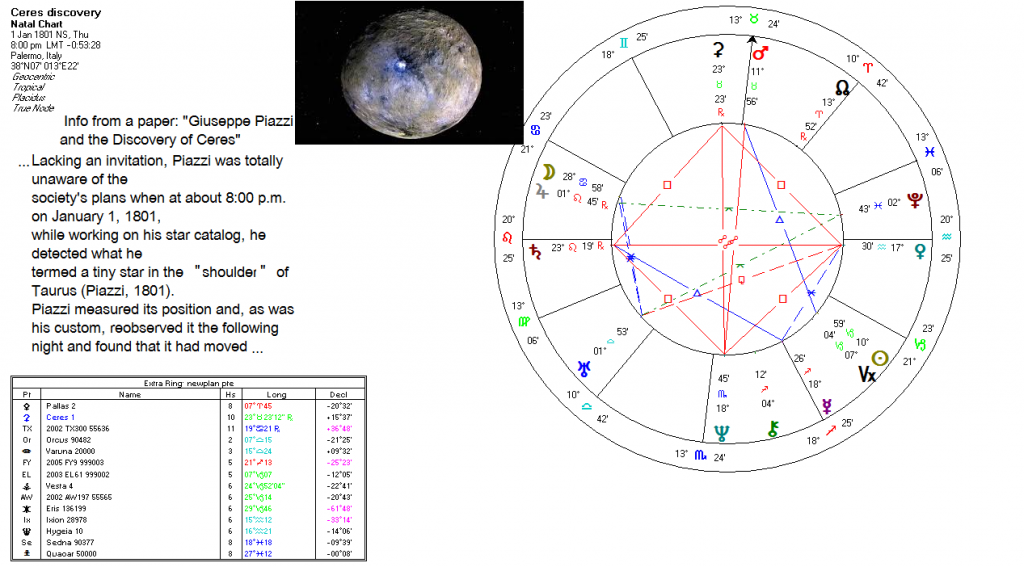 Ceres is presently active in the chart of the UK, discussed later. Our nearest dwarf planet was discovered by an Italian, one Giuseppe Piazzi, an Italian Catholic priest at the Academy of Palermo, Sicily, where he was working on a star catalog. He first observed Ceres at around 8:00 PM on that day in Palermo. At first he thought he had observed a comet, but later confirmed to himself that it was indeed a planet, and not a star or comet. Ceres was later reclassified as an asteroid, the classification lasting until the discovery of Eris, which caused the entire planetary system to be reconsidered. Pluto thereafter joined Ceres, enjoying the status of a dwarf planet, in a sense being reunited as siblings. The reason for this last statement is connected with how the solar system evolved to its present state.

Here’s the theory, as astronomers are beginning to understand it: There are two models/theories about the formation of our solar system and how the planets came to be in their present orbits. They are as follows:

…the Grand Tack hypothesis, suggests that Jupiter and Saturn initially ducked inward to the inner solar system, before gravitational imbalances sent them back to their current orbits far from the sun. The other, the Nice model, suggests the four gas giants (Jupiter through Neptune) initially had tiny, tight orbits, which eventually spread out slowly to what we see today. The two theories aren’t mutually exclusive…

As to the second model, this does not refer to an attractive mannequin, but instead to the city in France. It’s scientific convention to name theories after cities and so forth. Regardless of the theory, though, the result is the same: Ceres probably started her evolution in the outer reaches of our solar system and then got pulled in due to the gravitational pull of Jupiter and Saturn, whereas Pluto was left cast out into the depths of the solar system by the gravitational pull of Neptune, as the latter slowly spiraled out to its present orbit. And that leads into the mythology we have passed down to us by the Greeks and Romans.

Ceres is the Roman name for that little world, now known as a dwarf planet. Her Greek and more ancient name was Demeter, one of the twelve Olympian gods. Her daughter was Persephone, or Proserpina in Greek. Ceres/Demeter was the sister of Juno, Vesta, Neptune and Dis (Pluto). We won’t go into the mythology here, as it is fairly well known among astrologers, except for one part of it. Actually, there are two parts, starting with this, from the Aeneid:[1]

When Ceres sought through all the earth with lit torches for Proserpina, who had been seized by Dis Pater, she called her with shouts where three or four roads meet; from this it has endured in her rites that on certain days a lamentation is raised at the crossroads everywhere by the matronae.

This idea of the crossroads will be important in a bit. The second part of the mythology of interest is the idea of the change of seasons, as in changing our point of view, with which Ceres is also associated:

The Romans explained the turning of the seasons with the following story:  Ceres was the sister of Jupiter, and Proserpine was their daughter. Proserpine was kidnapped by Pluto, god of the underworld, to be his bride. By the time Ceres followed her daughter, she was gone into the earth. Making matters worse, Ceres learned that Pluto had been given Jupiter’s approval to be the husband of his daughter. Ceres was so angry that she went to live in the world of men, disguised as an old woman, and stopped all the plants and crops from growing, causing a famine. Jupiter and the other gods tried to get her to change her mind but she was adamant. Jupiter eventually realized that he had to get Proserpine back from the underworld, and sent for her. Unfortunately, Pluto secretly gave her food before she left, and once one had eaten in the underworld one could not forever leave. Proserpine was therefore forced to return to the underworld for four months every year. She comes out in spring and spends the time until autumn with Ceres, but has to go back to the underworld in the winter. Her parting from Ceres every fall is why plants lose their leaves, seeds lie dormant under the ground, and nothing grows until spring when Proserpine is reunited with her mother.

There is also a reincarnation story in the preceding, however we’ll leave that for now. But from the preceding, then, we see that Ceres is intimately linked with Pluto, all the while living at Jupiter’s side. They were pretty smart, the Ancients. But this brings us to the point of this article. Aside from the more mothering, nurturing aspects of Ceres, there is another, somewhat harsher reality that shows especially in the directions/progressions to and from Ceres, and which shows her connection with Pluto in terms of her qualities – those directions/progressions indicate turning points or crossroads in a person’s or nation’s life, depending on the planets aspected, the houses involved, etc. And in event charts, too, a prominent Ceres can indicate an event that represents a turning point. Something must be given up or an attachment released, in the nature of Pluto, in order that a new way forward can be realized. I have personal examples that illustrate this.

In tracking the solar arc directions through my own chart, one of the more significant ones was the direction of Ceres square my Uranus. That was the year I discovered astrology. It changed my life. There was another significant direction when I was very young, a fall, which was when the meridian was directed to my Ceres, which resulted in a life-threatening injury. Then there was yet another with a Jupiter direction to my Ceres, which was when I landed one of my most significant jobs and set my course as a technician, another life-changing moment and turning point. There have been many such examples. Then, too, any direction of Ceres has to be weighed against the other factors going on in the chart at the time to gauge where the most significant turning is taking place.

Transits to Ceres in a chart can indicate significant turning points, too, especially if the transit is from an outer planet. For instance, in times of intense negotiations, Mars transits to Ceres can indicate game-changing factors introducing themselves. There was a recent example of this in the British Parliament in the Brexit debate. Theresa May’s Brexit deal was due to be presented for a third vote, although lacking in any significant changes. The day before the third vote was due, the Speaker of the House, John Bercow, cancelled the vote, throwing the government into disarray. It was a legal move and perfectly justified according to Parliamentary rules. Ceres in the UK chart (1 Jan 1801, 00:00, London) is in the 8th house, square to Saturn and opposite Neptune, forming a t-square with Saturn at the apex. At the time of the cancellation, Mars was transiting over Ceres, triggering the t-square and the decision, thus killing the vote (8th house). The chart is below (bigger): 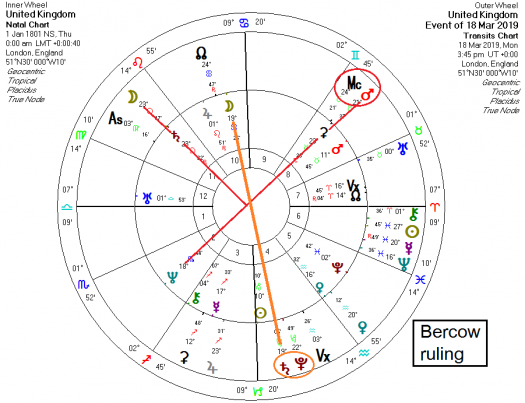 The directions to the UK at the moment show a turning point as well, with the Moon directed to a square with the UK Ceres and the Midheaven and opposite the UK Saturn, activating the aforementioned t-square. The biggest factor affecting the UK, though, is the direction of Pluto to the UK Ascendant, and the directed Ascendant to the UK Mars. Prior to that, in August of 2017, Saturn began to make a direction to the UK Mars, showing the inability to move forward with Brexit plans. And now, with directed nodal axis to Neptune there is no clear sense of a way forward for the government. The transits are quite stressful now, too, with transiting Saturn opposite the UK Moon, the Moon ruling the 10th house (the sitting government). That chart for directions is below (bigger): 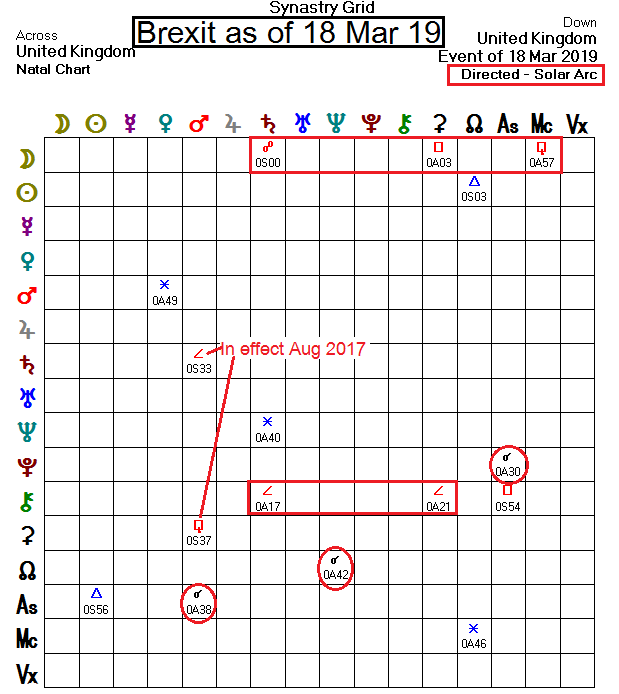 What we have with the UK over the next six months at least is a great amount of stress, much in the way of confusion, a government under fire and quite a bit of anger in the UK public. The government’s troubles will only increase as Saturn inches closer to Pluto, making its retrograde station there at the end of April, opposite the UK Moon. It is not difficult to see that the UK is at a turning point in its history. But there is the UK Ceres, being squared by the Moon by direction, the Moon indicating both the government (ruling the 10th house) and the public in general. The people voted for change with the Brexit vote, but the government has not lived up to expectations. We may just see a change in government there in the months to come, regardless of what happens with Brexit.

With this brief introduction to Ceres, we may perhaps see that Ceres is more than simply another asteroid, and a nurturing influence. It is a planet in its own right, and should take its rightful place in any horoscope along with Pluto, her sibling. Sometimes a mother has to practise tough love with her loved ones, kind of like pruning a plant to allow for more abundant growth. She indicates sea-changes in attitudes and shows a new path forward. Whether or not we take that path is up to us. But the next time we come to a crossroads in life, it might be wise to stand there for a moment and consider the path we choose carefully, instead of wailing about the difficulty of the choice and what we think we may have to give up.  Along one of those paths, though, a brighter future beckons. Ceres is there to offer alternatives and to show us the proper one to choose.