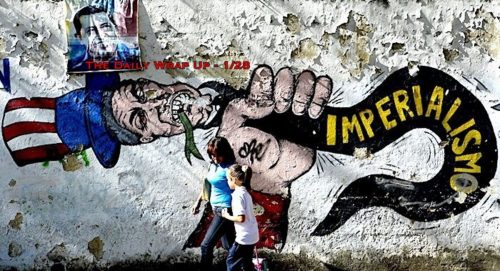 On April 30th at 5:46 AM local time, Juan Guaidó announced the ‘definitive phase’ in his attempt to unseat the Maduro government. In other words, he announced that a coup was in motion to oust Maduro. Apparently, Guaidó has never read Sun Tzu’s The Art of War. Neither, for that matter, have his supporters in North America. His attempt at mobilizing the military and populace against Maduro fell flat a scant few hours after it was begun. There are red faces and fierce rhetoric all around within the Washington Beltway. In Venezuela Guaidó has now fully disgraced himself and his movement. His mentor, Leopoldo López, has fled, taking refuge in the Spanish embassy. The few soldiers that stood in the attempt have sought refuge in the Brazilian embassy.

Warfare is the Way of deception.[1]

Guaidó made his announcement on the outskirts of the affluent Altamira district of Caracas, near the La Carlota air force base, one that is basically defunct. His mentor later Tweeted:

Venezuela: The final phase has begun for the cessation of usurpation, Operation Freedom. I have been released by the military to the order of the Constitution and of President Guaidó. I’m at the La Carlota Base. All to mobilize. It’s time to conquer freedom. Strength and Faith.

“Operation Freedom”…that sounds a lot like another military operation we once heard of – Operation Iraqi Freedom, or the 2003 invasion of Iraq. The Venezuelan opposition’s Operation Freedom’ turned out to be a little different from the 2003 event. The Venezuelan version instead was a bunch of guys on an overpass with a few small arms supplied by the US and EU and a crate of bananas. The chart for the start of the ‘operation’ is below (bigger). There is more to this event than meets the eye. 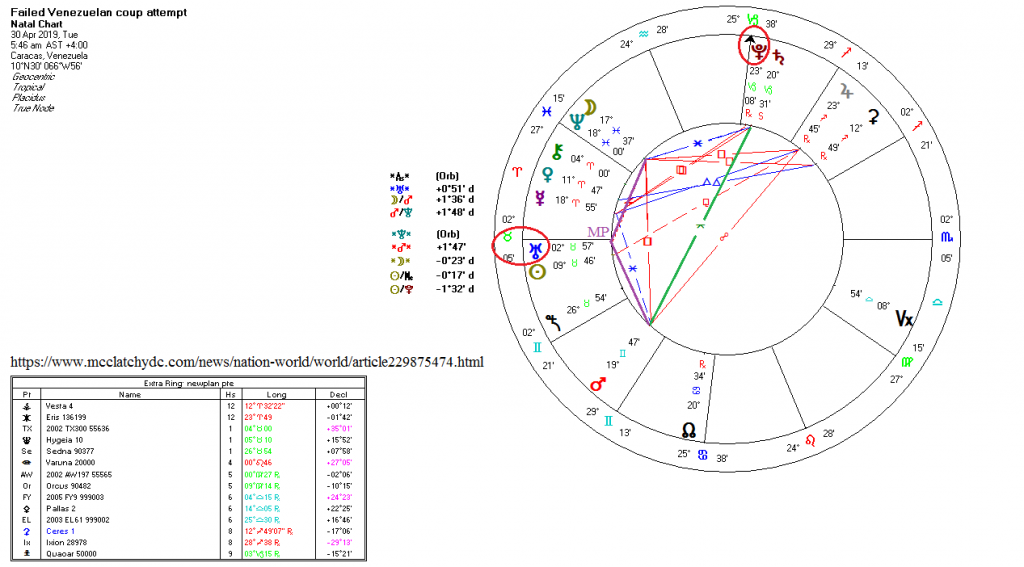 Before we get to the chart, there is one thing to keep firmly in mind as we go through the rest of this analysis: There has been a secret plan by the US government to overthrow the Maduro government in effect since before the Venezuelan elections last year. The event was yet another attempt at implementing that plan, revealed as “Masterstroke”. Keep in mind, too, that this plan is against all norms of international law, and  that is reveals what has been taking place in Venezuela since Maduro was reelected, and why.

To the chart then, the things that immediately stand out are the Pluto conjunction with the MC in the 9th house, conjunct Saturn also and square to Mercury, the latter in the 12th house. This points to foreign influence (9th house), hidden enemies of the state (12th house), deception (12th again) and hyperbolic rhetoric (Mercury square Pluto). It also points to usurpation, via the Pluto/MC conjunction. It was a coup attempt, after all. Then, we see the Mars/Saturn link by quincunx, a prime indicator of poor planning and execution. Saturn is also conjunct the south node, pointing to a plan from an old playbook.

Then, there is Uranian conjunction with the Ascendant, the latter in the first house, which is also at the midpoint of a Mars/Neptune square, pointing to the weakness of the attempt, a weak person, sudden changes in energy levels (the attempt quickly fizzled) and the unexpected outcome. Guaidó and his supporters grossly miscalculated the outcome of the event – or did they?

Apparently, the Guaidó had been talking with key officials in the Maduro government ten days previous to the event, and they had agreed with him that Maduro needed to go. He thought he had their support. Two of these people were Armed Forces Chief of Staff Jose Ornelias and commander Jesús Suárez Chourio. They quickly reversed their positions after the coup attempt started. The plotters attempted to overrun the air force base, mentioned previously, but were repelled by the government with tear gas and tanks. This was according to a former US diplomat in Washington. He said if he knew about it, then everyone knew about it. The Maduro government was ready for it and waiting. It would appear that Mr. Guaidó had been played. According to the ex-diplomat, “The regime probably even knew that people in the government were talking to the opposition and probably even approved of it.” But there is another possible twist to this, later.

Meanwhile in Washington, Bolton and Co. said that they had knowledge of the situation and had been following it closely. Of interest to note is that Saturn is currently transiting in quincunx to the US Mars, showing the same hubris and lack of judgment in Washington that we see in the attempt chart. In addition, Saturn is also transiting square to the US Chiron, showing a bitter disappointment. Venezuelan expats in Florida were cheering on the event. And transiting Ceres was on the US Ascendant, marking yet another turning point in US policy. Washington has a lot riding on the outcome of the situation in Venezuela. The failure of this attempt has been a significant setback. Since then the war rhetoric has become much louder.

Since the attempt there was quite a bit of fake news that came out about the situation there. Maduro was said to have been on a plane to Russia during the coup, but was told to stay put by Russia. Russia denied the claim, as did Maduro. The Russians are said to have nukes in Venezuela, a fantastic and dangerous claim that has no real foundation, nor was any evidence given. There are claims there have been large marches since the attempt in support of Guaidó. Instead, there have been large marches in support of Maduro in Venezuela (video). The latter received little to no coverage in the corporate press. He still enjoys the support of the military.

The Venezuelans are people who knew poverty under neoliberalism and the lifting of the lower classes under the Bolivarian state. It is unlikely they will defect in large numbers. But Maduro is not in a secure position. Venezuela’s constitutional woes and its enemies will be present for at least another year, according to Venezuela’s astrology (see later in that post). Probably one of the main reasons Maduro is surviving now is because of Russian and Chinese support and advice. I do not see the government being overthrown. Maduro may well be replaced, but that does not mean that the Bolivarian project would be finished. It will see some changes, though.

But, as for Guaidó, it has been stated that he is now probably worth more dead or under arrest than alive. Mention was made previously of another possibility with this attempt, and this would be one possible component of it. There was a similar ‘failed coup’ in Chile in 1973, a few months preceding the overthrow of Allende. What the hawks against Maduro would need is some kind of provocation to ‘justify’ some sort of military intervention. He has certainly been hapless at motivating or even correctly calculating the amount of sentiment against Maduro. The majority of Venezuelans still support the Bolivarian republic. That fact does not seem to figure in Washington’s calculations. But then again, maybe they know exactly what they are aiming to do.

So, there is another possibility with this chart, given the preceding paragraph. And that points to the Pluto/MC conjunction. Neptune forms midpoints with both the Sun/Pluto and Sun/MC axes, as well as with the Moon and Mars. One of those midpoints can indicate martyrdom. And of interest is that Juan Guaidó (chart) has the midpoints Asc=Mars/Neptune and MC=Mars Neptune in his chart, pointing to a person who is essentially weak and easily influenced. And, he is currently receiving solar arcs (chart) from Mars and Uranus to both his Ascendant and MC, especially from August, when Mars comes within orb of its direction to his Ascendant. It is highly probable that Guaidó is being set up as a fall guy. With that, the next months will be especially telling. There may be another event either in early June or August of this year. Mars and Neptune transits to Venezuela’s chart are telling in that regard.

There are many theories floating around as to why Trump and Washington are going after Venezuela again. Domestic politics is always to be considered. Trump is in campaign mode, and he needs to swing Florida to him if he is to win the next election. There is a large Latino expat community in Florida, and they are increasingly expressing conservative sentiments. The Cuban and Venezuelan expats especially are cheering on Trump’s efforts. This would be one reason why Trump rolled back Obama’s efforts at rapprochement with Cuba.

The other theory is that Trump wants Venezuela’s oil to be able to drive Iran’s oil exports to zero, but that is likely to fail, even with Venezuela’s oil. But that oil would also serve to keep prices at the pump low, which would keep the US economy buoyant and help him in his reelection bid. Then there is another theory, further out there, that the oil interests in the US want the Venezuelan reserves in order to sign a deal with the Saudis to increase their refining abilities, which would enable them to finance bin Salman’s ‘Vision 2030’ initiative and to finance Kushner’s ‘Deal of the Century’. The source for the latter is questionable, so I won’t reference it, but given the current relationship between the Trump White House, the Saudis and Israel, it may not be so far-fetched. On the whole, though, this is playing more to domestic politics than anything else, from all appearances. Appearances are often deceiving, though.

Will there be a military intervention in Venezuela, then? Not if Trump has his way. Trump wants to avoid a war, again because it would not play well to Americans. It would also be profoundly stupid and cause a long, drawn-out guerrilla conflict, causing a massive refugee exodus. And the mass of Venezuelans will resist any such attempts very strenuously, given what the society has accomplished in the past years, even in the face of the endemic corruption and mismanagement in that nation. That would not go away with a new government.

We will watch this space over the next months, then. If this was a test of the waters, as it were, then we will see another, larger provocation in the months ahead. But Venezuela is not Chile in 1973. The CIA playbook that is being used in Venezuela now is open for everyone to see. The Russians also learned a lot from the Maidan coup in Ukraine, and they are advising Maduro now. We notice there were no riots on May Day, when the nation was out in force to celebrate the Bolivarian revolution. And Venezuela is not Iraq, or Panama, or Nicaragua, or Libya. It is a large country, with dense jungles, high mountains surrounding much of its most productive oil reserves, a disciplined and professional military and a motivated populace. Superimposed on the Middle East, Venezuela would cover all of Iraq, all of Syria and a third of Iran. The Pentagon wants no part of a war with Venezuela. 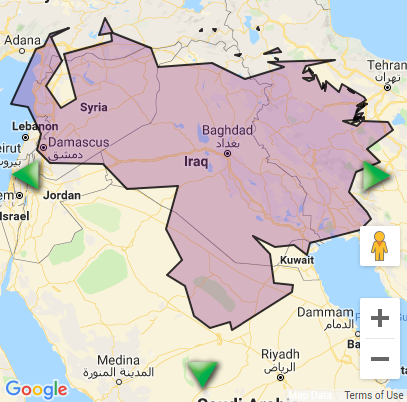 We keep hearing that “all options are on the table” with Venezuela. Maybe. But for now the situation there looks increasingly as though the present form of government will survive, if not with Maduro, and despite what we hear in the corporate media – most of which is very similar to what we heard in the lead-up to the 2003 Iraq war. Pompeo himself has said that the CIA lied, cheated and stole prior to and under his direction. If warfare is the way of deception, then we need to keep our eyes and ears open, and look at sources of news far and wide.