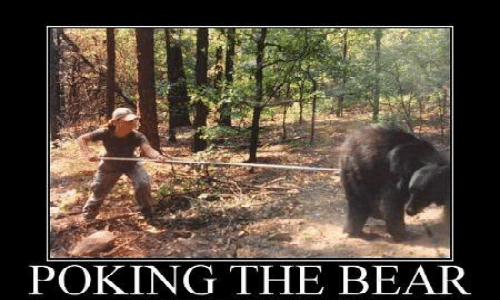 Most of us would have heard now about the downing of the Russian IL-20 surveillance plane over Syria. The event took place on 17 Sep this year, and I covered the event briefly in the Libra letter. As it turns out, that event has marked a key turning point in the Syrian war, and one which may yet lead to a large escalation in the conflict, with possible disastrous consequences, not to scaremonger here. But the reality of the situation now is that the Russians have been backed into a corner in Syria now by the foolish actions of a few Israeli pilots and the hubris of the Israeli Defense Force (IDF). Russia has established an unofficial no-fly zone over the Syrian coast, has supplied Syria with with its S-300 missile system, which John Bolton of the US called a ‘major escalation’ (?) and blamed the Iranians (?) for the downing of the plane. For its part, the IDF has blamed the Syrians for the downed plane. Russia, on the other hand, has supplied pretty irrefutable evidence that the fault for the incident lies squarely with Israel. As a result, the Russians have stated that any unauthorized aircraft flying through their no-fly zone will be shot down. It would appear that the gloves are off now. If Putin backs down from the next provocation the consequences would be too much and Russia would be set back for years in its foreign policy. The Israelis, Saudis, Emiratis and neocons in Washington may soon have their escalated war, but at what cost? We await the next chemical weapons performance or for an Israeli plane to be shot down. Hopefully not.

The chart for the IL-20 incident is a good study in midpoints, and also for a glimpse into the little-known plutinos, that should be more widely used. The chart is below (bigger). To begin, we find the planet Orcus at 10° Virgo, square the horizon from the 4th house. Orcus is at the midpoint of Uranus/Pluto. Orcus is the planet that a friend of mine has called the ‘drill instructor’. Its placement in a chart shows where one has most to keep on the straight and narrow. I call it the planet of instant karma. Israel violated a non-confliction agreement with Russia in the incident, and then lied about doing so. Orcus has been called ‘anti-Pluto’ for astronomical reasons, but its actions astrologically are very Pluto-like, though not as far-ranging and much more specific. The Uranus/Pluto midpoint is associated with the collapse of old orders. In addition, since this was a war event, and a deceptive one at that, there is also the connotation of “Acts of violence, upsets, subversive activities, putting the gun to someone’s head, the enforcement of decisions, an accident.”[1] This is reinforced by another midpoint: Mars/Uranus=Neptune – “Cunning and deceitfulness, a low and mean way of acting, the desire to harm other people, a person with bad intentions.”[2] Since Mars and Uranus were square at the time, this midpoint makes a more powerful statement. 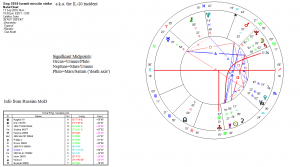 There are many such midpoints we could examine, but to keep things brief, there is one more that warrants mention. The death axis of the chart (Mars/Saturn midpoint) had Pluto at the midpoint – “murder, the death of a great many people”, along with brutality, fury and bodily harm. And then, there was a square by the Sun to Ixion, also a plutino, denoting a careless attitude as to outcomes, also sometimes indicating a note of insanity (in this case the act was apparently calculated), but on the whole giving an attitude of, “So what?” or, “What’s the use?”. Ixion is in the 7th house, the attacker(s). So, while the chart devoid of dwarf planets, plutinos and midpoints does not show a lot in terms of a military event and many deaths, the midpoints and dwarf planets tell a very different tale and give a clear picture. Now, these points being made, some readers might be inclined to think that it was the Russians who cooked up this story about the ‘evil intent’ of the Israelis and so forth in order to deflect blame or cover their errors. And there are doubts about the Russian version. But evidence from the Russian side shows that the Israeli planes were definitely shadowing the IL-20 and continued patrolling the area after the incident. Opinions aside, what is really important to our considerations here are what has happened since then and the possible consequences.

As stated at the start, the Russians have finally started supplying Syria with their S-300 system, along with a batch of shorter range missiles. This is in addition to more advanced electronic warfare and radar systems. The S-300 can strike any target in Israel. The response from Washington was predictable with the usual hyperbole. But what is the real problem there? The US is only there to fight Daesh, (terrorism) right? Well, since the 17th, when an accord was struck between Russia and Turkey regarding Afrin, and removing the need for any sort of military strike there – American/coalition or Syrian/Russian – the following has emerged as a clear picture:

“Neither the US nor Israel can countenance a military presence superior to Israel’s in the entire Middle East region. The actual Russian deployment to Syria may not be big, but Israel is very well aware that Russia has vast strategic depth, which it cannot hope to match…The bottom line is that so long as Russia has a strategic presence in the Middle East, Israel cannot regain its military dominance in the region. And time doesn’t work in Israel’s favour, either. Iran is rising and Turkey remains unfriendly. The sooner things get done, the better for Israel – preferably while Trump remains in office.”

Regardless of whodunnits and so forth, it is clear that Russia has had enough of Israel striking Syria with impunity. Israel is now seen as ungrateful to the Russians for all the assistance Russia has given them. Iran is there to stay. The Golan belongs to Syria. There is now a larger and larger buildup of ships in the eastern Mediterranean of many nations. One might think those are headed for a conflict with Syria, but it is more likely they are there to ensure the exploration of the massive gas fields in that region, but of which Syria holds massive reserves off its coast, with Russian and Chinese firms slated to explore it. And what we have just seen was a repeat in miniature of the coalition that led the attack on Egypt during the Suez crisis. We will probably see some shifts in relations between France, Britain, Israel, the US and Russia in the near future. The Russians feel betrayed, clear enough, and their astrology shows it, by a direction of Pluto to their Mars. That Mars lies at the midpoint of Neptune and Pluto, which leaves them open to being used by third parties, in this case Israel. The latter is not hard to imagine, given that 14% of Israel’s population comes from ex-Soviet states. But, this incident will come to no good for Israel. Their astrology looks quite stressful over the next months. That is another story. In closing, here is a word to the wise: It’s not a good idea to poke at bears. It rarely comes to a good end for the one doing the poking.