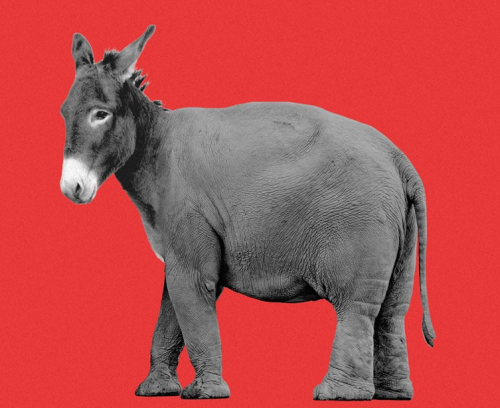 Well, finally, the nail-biter of a midterm election is over. The world at large will breathe a sigh of relief for those quarters that have been appalled at the Trump administration, while there will be disappointment in the farther right-leaning and business sectors internationally. The election was touted as a referendum about Trump. And there you have it: As many pundits predicted for the US midterm elections, the Democrats have won the majority in the House of Representatives and the GOP has retained the Senate. However, there was no ‘blue wave’. The Dems only gained enough seats in the House for a simple majority. The GOP gained at least three seats in the Senate. But, it has been a setback for the Trump administration.

There were wins and losses on both sides (Democrat and Republican), successes and disappointments, but overall a disappointing result for Democrats. We’ll get to why in a bit. And over the coming days the political pundits will be out in force, either crowing about their predictive ability or trying to be philosophical about how they could have gotten it wrong. But, if the focus there remains being about the two major parties in the US and about Trump, it misses the point.

This, in truth, was a referendum about the 1 – 5%. You know what I mean. We’re talking about the richest people in the US who for the most part control the outcomes of elections in their favor. And for those people who voted Democratic to oppose Trump and the Republican Congress, we should note well that the Democratic Party in the US is no longer the ‘party of the people’, any more than Republican Party used to be. Both sides of the aisle have to answer to their wealthiest donors and have largely been corrupted by the absence of any campaign finance regulations. The Democratic Party is no longer left-leaning. It is now a center-right party which gets most of its donations and campaign financing from corporate interests and billionaires – oligarchs, in other words. So in effect, we still have the ‘swamp’ in control of the government, and we are not likely to see any significant changes in policy over the next two years, much as we might hope for such. However, unless the Democrats completely fall under the spell of big finance, we can probably rest easier as regards keeping our Medicare and Social Security, and will probably not see any other major tax cuts for the rich and corporations. As evidence, the value of the dollar dropped as soon as the election results came in, meaning the corporate sector was not happy with the outcome.

As is normal for this blog, though, we are going to look a bit at the astrology of the US in more detail as a result of the election and see what it told us beforehand. And once again, the Sibley chart of the US has proven itself, as we will outline. So, to start, we talked about two midpoint axes in the US chart that also involve Venus. For this post, we are going to look at the US Venus more pointedly because it is a very significant point in the horoscope of the US for a variety of reasons. To start, we find a stellium of planets mostly in the 7th house in the sign Cancer, the exception being Mercury, posited in the 8th house. The 7th house represents the people of a nation in a national horoscope, whereas the opposite house (the Ascendant) represents the national mood. The 4th house, which normally represents the house and home, represents the national infrastructure and opposition parties, ruled in this case by Mars, also in the 7th house. (see bigger) 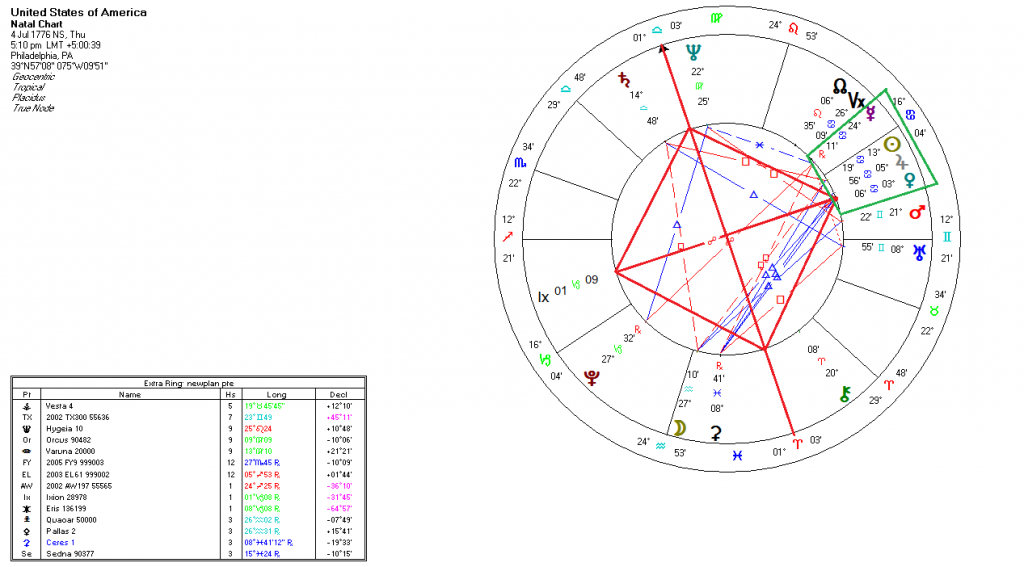 The planets in the stellium just mentioned also include the Sun, Venus and Jupiter. The Venus/Jupiter conjunction represents the high idealism we find in the US, as well as its vaunted optimism, which I hear so much about here in Italy, and elsewhere. The Venus/Jupiter conjunction is in a wide conjunction with the Sun. Venus is also opposed by Ixion from the 1st house, and Americans are known for their brashness and devil-may-care attitude about many things, which such a placement can bring. Ixion also squares the national meridian, which reflects the disdain the government often shows to its partners these days. But, Americans are also known for their generosity – not so much the government, mind you, but the people themselves – and this is also marked by the Venus/Jupiter.

There is another side to this Venus, though, part of which was touched on in the last post, and that reveals itself when we look at what Venus rules in the US chart. It rules the 10th house (the public esteem in which the nation is held and the sitting administration), the latter being the Trump administration. It also rules the 6th house, which governs things like services, the military and health care in general. And, as mentioned in the last post, Saturn has been opposing Venus since the start of this year for the most part. What this means in an election year, then, is fairly obvious.

Saturn represents restrictions and reckoning – karma coming home to roost. And symbolically, this meant that the sitting administration would receive a setback at the election, which it did. But Saturn was also opposite Jupiter, ruling the 1st house of public mood, and the general mood of the public was not the best, to say the least. The Democrats, for the most part, ran their campaigns as an opposition to Trump and his policies, which in one respect is understandable, but it ignored the major issues facing the average American – health care, pharmaceutical prices, infrastructure – a long list in other words, that both parties chose to ignore. So, in effect, this election was like mud in the eye to the great majority of Americans and continued to show the true colors of the major parties. In other words, the message this election sent to Americans was, “We don’t care about you. We just want Trump gone so we can continue as we have been.”

But what else were Americans to do? There were no viable alternatives to the major parties, no strong third party candidates. Essentially, the vote was against the Republican-dominated system at the moment, which has sought for some time now to take away the very last entitlements that Americans have fought so hard for in the past. There is some small comfort in that for people who know what the main issues at hand are, and there is now a breathing space for the more progressive voices to regroup and make for a much stronger showing at the 2020 election, which looks to be quite a major one for the US, more so than this one. More on that closer to the time. So, the focus now is upon the House and what they might do with the next couple of years.

The important takeaways from the Democrat’s house win are, to start, that the House controls committees, which have subpoena powers, meaning for instance that Trump will no longer be able to hide his tax returns. There will now be Congressional oversight regarding the Trump administration, whereas there was none before. Progressive candidates within the Democratic Party did not do well, and that sends a strong message to the nation: there is no support for what amounts for positive change for the American people among the Democratic Party especially, or among Republicans. We may very well see civil war within the Democratic Party. But what we are more likely to see is theater about Trump, rather than meaningful conversations and public discourse on matters such as, mentioned previously, infrastructure and health care. Those are matters upon which Trump actually campaigned and upon which he has bipartisan support amongst the populace, if not the major parties.

If the Democrats focus on Russia instead of the issues that really matter to Americans, they will lose the House again in 2020. There is a trap there for them in the making and the Republicans will try to spring it. Don’t expect to see any impeachment proceedings with a Republican-controlled Senate. There is an opportunity here for the Democrats to actually work with Trump on those issues, which would serve them much better in the long term, but then the Republican Senate stands in the way of passing any sort of beneficial legislation. And I have my doubts that Democrats will take the opportunity presented. Since they have not supported their progressive candidates, that makes a pretty big statement about what to expect from the DNC.

There is another takeaway from this, too, also related to Venus and this time to the 6th house. This election was also a setback for all things related to that house. We can probably safely doubt there will be much in the way of change for public services. But since the House controls the purse strings of the nation, we might also expect that the obscenely large defense budgets might be scaled back, which would be a good thing. However, there are a large number of hawks in the Democratic Party, so don’t expect defense spending to see much of a change. It would be modest at best. There will be battles over the budget, though, in general in the next two years.

All of the preceding being said, and given the two axes and the progressed Moon we examined in the last post, there is an opportunity for national healing now, if the various parties and factions will take it up. That’s a big question mark these days. But Trump has had his wings clipped. More than that, though, the oligarchs have also seen some rain on their parade. The disaster the progressives most feared has been averted, for now, and Trump will now have to actually work with Democrats if he wants to get anything done. Given the tone of this administration thus far, that is a good thing.

But there is one last closing comment before we go away and take all this in. Saturn will oppose the US Sun in mid-January next year. That is not an easy transit. The last time it was there (1989) we had the savings and loan crisis and the Keating Five. And the time before that we had the sit-ins– which brought national attention the Civil Rights Movement. The Sun rules leadership in general and in the case of the US, the 9th house, representing the national ideals, foreign trade, religion and the judiciary. That transit will highlight how the nation has been led for the past 14 years, if we have lived up to our national ideals and the other factors mentioned. All of them are magnified for us now. Next year will be quite interesting, indeed.

Featured pic from The Atlantic