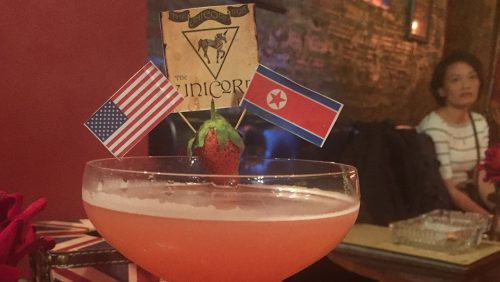 On 27 Feb 2019 Trump and Kim met for their 2nd summit on the North Korean situation. The expectations for the outcome of the summit were not high, but some small progress was made. As Trump stated, “We had to walk,” meaning progress is slow. The US media is already painting the talks as having ‘collapsed’. As usual, the sticking points were sanctions and de-nuclearization. As one would expect, the astrology for the meeting outlines what took place.

The chart for the start of the summit is from the first meeting, which was at 6:29 PM in Hanoi. The chart is below (bigger). 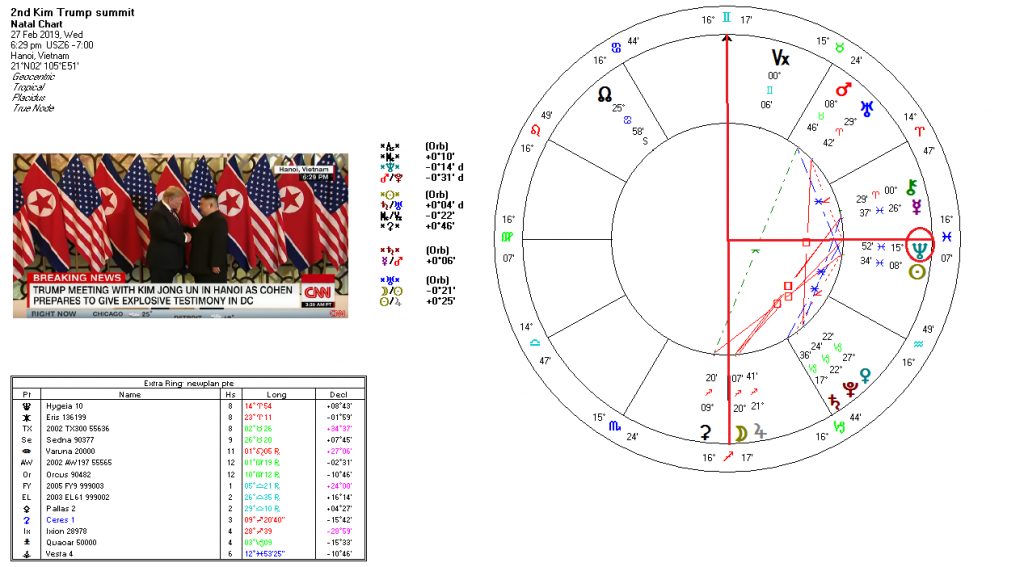 The immediate thing that stands out in the chart is the Neptune conjunction with the Descendant from the 6th house. The 7th house rules contracts and agreements. Neptune also squares the meridian axis, representing the leaders. The upshot form this is that issues would remain unresolved and with no agreement, or a nebulous one at that. But hopes were high. The lack of a resolution is further reflected in the midpoint tree of Neptune=Mars/Pluto, indicating implacability and/or irreconcilable issues.

Trump is said to have gotten up and walked away early from the negotiations after the North had asked for partial sanctions relief in exchange for shuttering some of its nuclear facilities. His statement before about having to walk refers to this as well. The sudden shift in relations is indicated by the Venus/Uranus square. The US stance is that the North must fully de-nuke before there is any sanctions relief. But that goes against the Panmunjom Declaration they signed earlier. Trump had demanded that the North shutter its Yongbyon facility (its main facility) and other complexes, which the North refused to do with no sanctions relief. The Chinese have urged the US to meet the North Koreans halfway, something that Washington is not inclined to do. Trump’s actions at the summit will not go down well with the Chinese in their trade negotiations with the US.

The Mars/Pluto base indicates the matter at hand, which is military (Mars) and nuclear (Pluto). The Neptune aspects to both the meridian and horizon point to the disappointing outcome. But small progress was made, according to Trump and Pompeo, as stated in their news conference after the summit. We weren’t told what that progress was, but maybe it will come out later. There was no progress on lifting sanctions or on greater de-nuking.

For his part, Kim has agreed that there would be no more testing of nukes or missiles. Trump has stated there will be no more war games or further sanctions in the immediate future. Both sides agreed that talks would continue, so the summit wasn’t a waste of time. It is yet another step in what will be a long process. The North will not give up their nukes if there is no peace treaty. For his part, Trump stated that he did not feel it was appropriate to sign any sort of agreement at the summit. However the statement was made that the meeting ended on a cordial, friendly note and that progress was made. Progress is indicated in the chart by the Sun/Mars sextile, the Saturn/Neptune sextile and the Moon/Jupiter conjunction. Pluto, ruling the 3rd house of dialog, sits at the midpoint of Venus and Saturn, indicating the strong tensions that still exist between the US and North Korea. There is currently no agreement for a next summit.

The purpose of the summit was to hash details (Virgo Ascendant) for an agreement. The main sticking point for the US is the nuclear arsenal of North Korea, and the talks centered on that, indicated by the 6th house placement of the Sun, with the Mars sextile. The 6th house rules military affairs. Mars in the 8th is reflective of the sanctions (re: international banking). Mars rules warfare in general, and sanctions are a form of warfare. There is at least understanding on both sides on what is at stake and expected from the other side. The difficulty in the talking points is indicated by another midpoint, Saturn=Mercury/Mars, which points to the difficulty also in coming to a decision.

The ease of the dialog between Kim and Trump is indicated by the Mercury/Venus sextile. The friendship between the two is indicated by the Moon/Jupiter conjunction, the Moon ruling the 11th house. The 11th house also indicates alliances, and with Neptune square to the Moon/Jupiter conjunction, this is a further indication that no agreement was reached, because it would have put the allies on edge. As to the friendship that Trump kept stressing that existed between Kim and him, the Neptune square shows that the relationship is not all that it seems.

On the whole, there is still promise for something to work out. Trump kept repeating what an economic powerhouse North Korea would become once agreements are reached. And that is true. North Korea has a big pool of skilled workers, similar to what we saw prior to German reunification. Probably what would happen immediately after such an agreement is reached is that the rail links between Russia and the two Koreas, and China and the two Koreas, would quickly be connected and operational, along with Russian gas fueling both of the Koreas. That would immediately give both Koreas access to the larger Eurasian land mass. The Koreas would become an integral and powerful link in China’s B&R strategy, and the Far East would go far toward being the world’s most powerful economic and industrial  hub. But in the meantime, the sanctions and the nukes will remain the main sticking points, and so long as the US insists on the nukes going before the sanctions, and vice-versa, the issues will remain unresolved. But still, we hold out the thought of peace between the Koreas, the US and the region. There is progress being made, however slowly