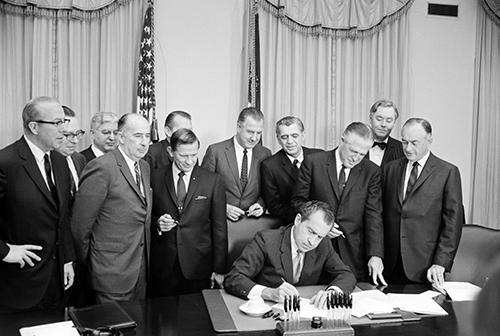 The year was 1971. It was August 15th, a quiet Sunday summer’s eve, and millions of Americans were tuned in to the latest episode of Bonanza, the longest running TV westerrn series in the US. Hoss was still with us, but would pass on the following year. There were nationwide protests growing against the Vietnam war. The nation was still reeling from the Kent State shootings a year before, and the Pentagon Papers had just been leaked two months before. I had my mind occupied with electronic circuitry, high school and how to get my fingers to work on my latest discovery, the guitar fretboard. Yes, it was a quiet evening, and then this happened…

There are many days that ‘will live in infamy’ for the United States. This one will go down in history as the day the American dream began to turn into the American nightmare. It was the date when the US dollar was floated as a fiat currency, taking it off the existing gold standard, and it changed the world as a result. The West in particular would suffer the effects of it for years to come. ‘Tricky Dick’ lived up to his name that August day. I don’t have a time for when Nixon signed Executive Order 11615, which authorized the float of the currency, but it was sometime earlier in the day. The time for his announcement was between 9 and 10 PM, which was when Bonanza aired. The chart is below (bigger): 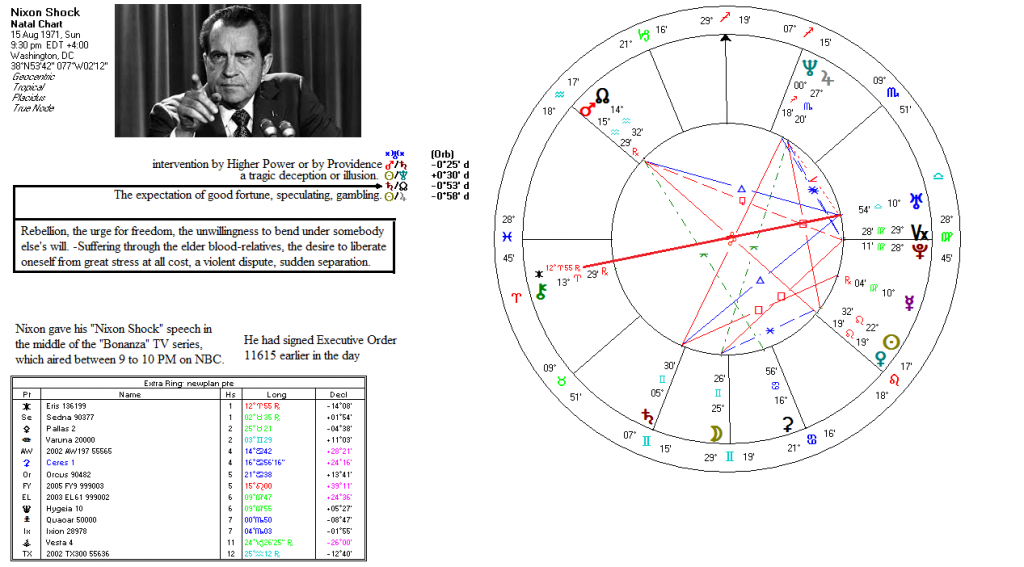 Since we don’t have a time of day for the signing and only an approximate one for the announcement, when it comes to it, it doesn’t matter that much. The midpoints on the day are pretty clear as to what took place. The Sun was in dramatic Leo, and this was indeed quite a daring gamble on the part of the Nixon administration. It threw the entire world financial system on its ear. Since it was the institution of a new system, the aspects and midpoints to Uranus spell out what was taking place. From the chart we see it was likely a great deception, described even as ‘tragic’, and over time it has been for the average American (Ura=Sun/Nep). Uranus was opposite Eris, showing the ‘golden apple’ (interesting symbol) being thrown into the midst of nations, with promises of wealth, stability and ‘justice’.

Uranus was in an applying trine with Saturn, showing that it would produce stability for the US, at least for that present time, and was in an applying trine to the nodal axis, showing the successful rearrangement of relations. The separating trine with Mars showed the confidence Nixon had in making the decision. He had met in secret with advisors in the preceding days to hammer out the details. He made the announcement on Sunday evening so as not to overly disturb the opening of the NYSE the following morning. But the other midpoints are even more revealing.

The move was a gamble (Ura=Sun/Jup), as well as the urge to be free (Ura=Sat/Node) of the constraints of the Bretton Woods system. The latter midpoint also shows it was also a move aimed at consolidating the hegemony of the US dollar as the world’s dominant reserve currency. And then we have the clincher: Ura=Mars/Sat – the intervention of a higher power or providence.

Who might have been the higher power that would prompt such a move? The unelected state? Corporate interests? The banking cabals who finance the US? Foreign interests? All of the above, maybe? Who could say? But it is highly unlikely that Nixon would have thought this up on his own, not because he was stupid, but because of the consequences he might have suffered by making such a strange decision. But then, Watergate did finally get him in the end.

It is widely accepted now that Nixon did this as a result of the costs of the Vietnam War. But there was much more to it than that. He was a monetarist, although he pronounced himself to be a Keynsian. But one of the prime reasons he did so was for domestic politics: He was up for re-election and the economy was tanking. Incumbents don’t get re-elected if unemployment is high and the economy is poor. That is what he was facing. From the linked article:

“He believed that easy monetary policy could reduce unemployment in the short run and knew that presidents have a hard time getting reelected when unemployment is high. On 26 July 1971, Nixon was captured on tape stating, “I’ve never seen anybody beaten on inflation in the United States. I’ve seen many people beaten on unemployment.” When Nixon took office, unemployment was only 3.4%, but after the recession in 1969–1970, unemployment rose to 6%, where it remained. Given that Nixon had publicly stated that he would improve employment, he was committed to getting the number down by election time.”

The next election was to be in November, 1972. War is hard on national economies. The account balance for the US had fallen steadily since the escalation of the Vietnam war, having fallen into negative values by 1971. 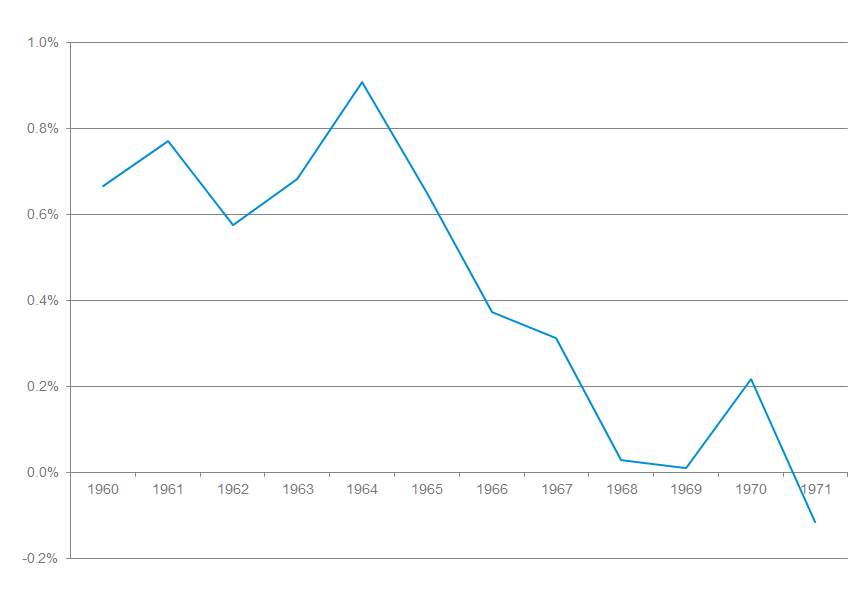 The US has had a chronic account deficit since Nixon floated the dollar.

There is no such thing as ‘easy money’, unless one knows how to game the system, which is what has taken place since then. And instead of a monetary system based on value, the fiat system is one based upon trust. From the same article:

As with credit markets, trust is at the core of a fiat monetary system. Should that trust deteriorate, the value of a currency can change rapidly. If and when that trust deteriorates, it happens quickly. The current system has made the value of the dollar a hostage to politicians, not to the currency markets or “international speculators,” as Nixon wanted the public to believe.

This is precisely the problem we have with Washington at the moment. The problem is at home, not because of foreign interference. Wall Street and corporate interests control politics in the US now. So, the question naturally arises: What did the float of the dollar mean for the US? The chart is below (bigger): 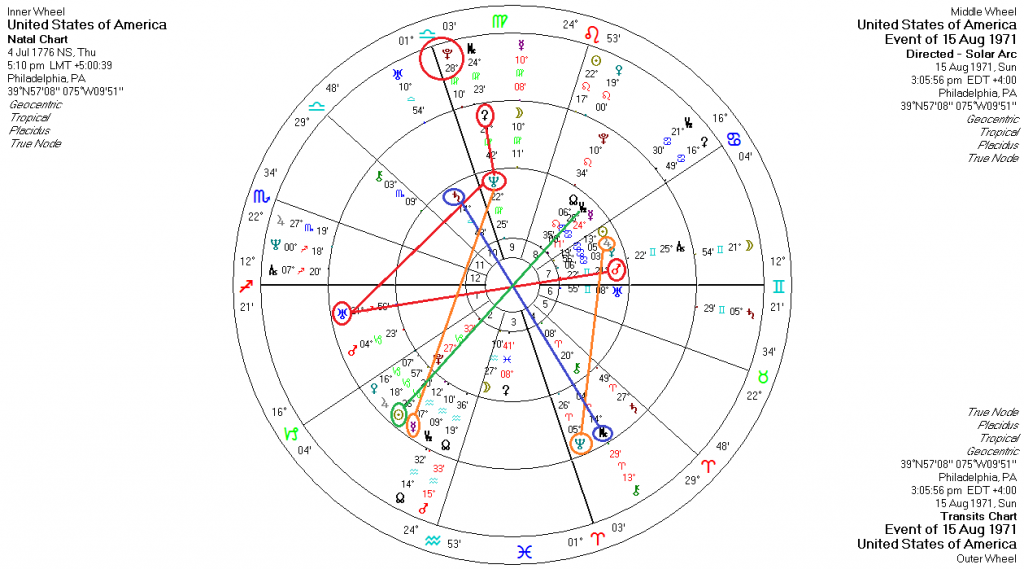 Directed Uranus was square to the US Neptune, thus magnifying the deception foisted on the American people. It was also opposite Mars, thus activating the natal Mars/Neptune square of the US. This is an aspect found in leaders of the Church and the military, which gives the power to move hearts and minds. It reinforces the deception represented in the previous chart, also the ‘intervention of a higher power’. Directed Ceres was conjunct the US Neptune, showing the shift in the course of the national narrative.

Directed Neptune was square the US Jupiter, the ruler of the Ascendant, another indicator of deception, but also magnifying the advantage to speculators. It also represents a dream, Nixon’s dream. The directed MC was opposite the US Saturn, ruler of the 2nd house (banking), indicating the fatefulness of the decision and its control or gift to banking interests. Directed Mercury was also aspecting the US Neptune, showing the use of the media to control the narrative, and finally, the progressed/direct Sun was on the Vertex axis, showing the new outlook of the administration and the involvement of the banking sectors, foreign and domestic.

And as for transits, there is one that is of particular note: Pluto had made its retrograde station about a degree away from the MC in December of 1970. This represents the subversion of the government, and the empowering of special interests. It completed the conjunction in its forward motion in November of 1971, the month “American Pie” was released, in an ironic twist of fate. The line, “Bye bye Miss American Pie”, the refrain of the song, had a specific meaning, jokingly referred to, according to Don McLean who penned the tune: “So when people ask me what American Pie means, I tell them it means I don’t ever have to work again if I don’t want to.” Nice, Don. The American dream, right? Well, especially since the days of Reagan, Americans have had to work harder and harder for less and less. It has been the same in many nations where fiat currencies and neoliberal economics have held sway. And it goes back to this very action by the Nixon administration.

Nixon once famously stated that he was not a crook. What was once the American dream is all but gone now except for a select few, a harder and harder slog for the many. That slice of the American pie has become thinner over the years, if there is even any left. Most Americans have been incrementally robbed of their future since Nixon interrupted Bonanza that evening. The only people reaping a bonanza now are the wealthy, unless you happen to go to the buffet bar at a Bonanza steakhouse. For my money (pun intended) Nixon lived up to his name – Tricky Dick. He certainly pulled the wool over America’s eyes that evening. And the next year he went to China. American jobs were soon to follow.