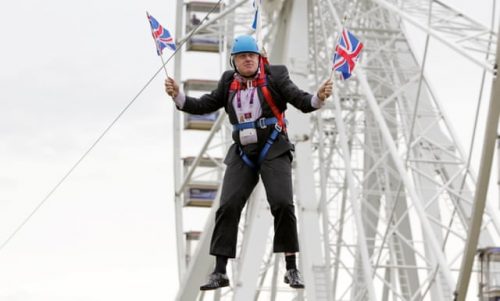 The UK has a new PM, having been selected as Leader of the Conservative Party. As of tomorrow (24 Jul 19) – one Alexander Boris de Pfeffel Johnson – otherwise known as Boris, will be sworn in as PM. Democracy in action. Oh wait…he wasn’t elected by the British people. He was selected by the Conservatives to head their Party. I forget that, as in Australia, people elect the political party, not the PM. So, what will this mean for the UK, Brexit and so forth? He says he is going to energize the UK. I expect he will, in more ways than one, if the featured pic is any indication.

Before we go any further, this is not going to be a hit piece on Boris. He has already brought quite a lot of that on himself through his speech and actions. That is in his chart, too, by the way, which is below (bigger). Instead, what is more important is what his premiership will mean for the UK, which we will also examine. I will be adding a bit more to this piece tomorrow in Part II after he takes the oath of office, with a look at his administration. So, this piece will be short for today. 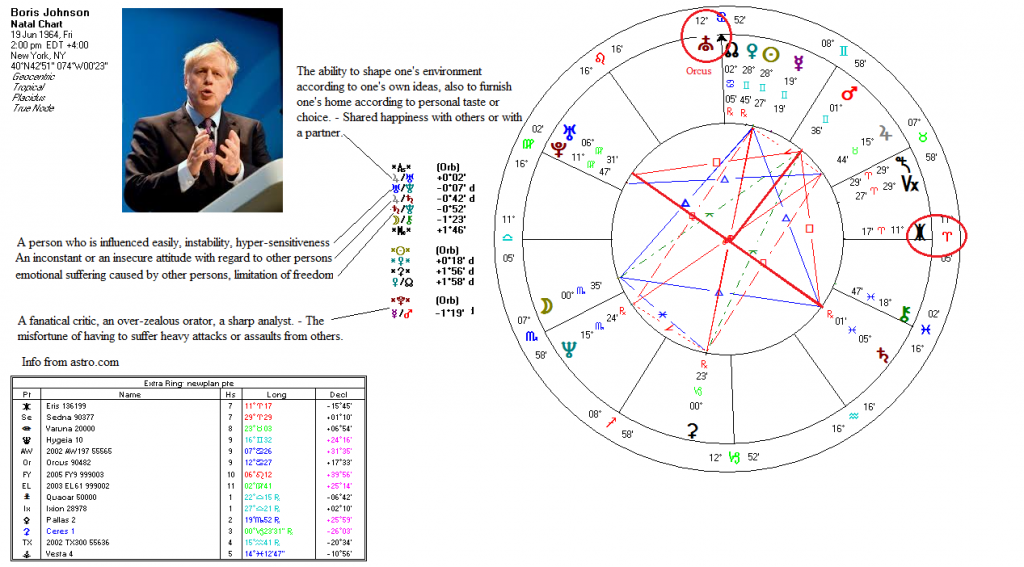 Who is Boris, then? It is worth noting before we start that the signs on his house cusps are identical with those of the UK. The Ascendants and Midheavens of the two are only a few degrees apart. That instantly gives him a subconscious resonance with  the people of the UK, for good or ill, and it also ties his destiny closely with that of the UK. Even though he has Libra rising and Cancer on the Midheaven, he is a divisive figure, perhaps reflecting his Gemini Sun. He is known for his gaffes, for the controversy he invokes.

He is a graduate of Eton and Oxford, along with the likes of  David Cameron, William Hague, Michael Gove, Jeremy Hunt, and Nick Boles, if that tells us anything. He majored in and received a degree in ancient literature and classical philosophy. After finishing at Oxford he took up his career path in journalism for The Times and The Daily Telegraph. He was fired from The Times for inventing a quote from historian Colin Lucas, his godfather. The episode turned out to be typical of his work ethic. After that he became a political columnist, thereafter going into politics. At each turn, he received criticism for his work ethics and lack of care for details or timing. We won’t go through it all here, as the Wiki article covers it, but it gives us enough to go on.

Boris has his Gemini Sun in the 9th house, conjunct Venus, giving his public appeal. It also reflects his stint as a journalist and as foreign secretary. The Sun is in a grand trine with the Moon and Saturn, and opposite Ceres. This shows his general luck in life (Sun trine Moon), the ease with which he floats into situations, his public face (elevated Sun in the 9th house with Venus), benefits through elders, men and senior people (Saturn trine) and his financial success (Sun/Venus trine Saturn), part of which is hereditary, part through sheer luck. There are no hard aspects to the Sun or Moon, which takes away the drive to success that a high-power business person or power broker would exhibit, for example. Instead, success essentially finds him, without too much trouble. But it is a deficit rather than a true help for him, as it doesn’t foster development. Nor does it push him to beyond his comfort zone, which is considerable.

The real standouts in the chart are the t-square with Mars at the apex and a Saturn/Uranus opposition at the base. This somewhat compensates for the lack of drive otherwise shown and releases the energy of the grand trine via the Saturn contact, albeit haphazardly. That t-square, is quite a volatile and reckless combination when not tempered by experience or firm guidance. In addition, it gives Boris an unusually high opinion of himself (arrogance, really) on the one hand and a devil-may-care attitude about it. On the other hand, it does show a great deal of independence (Mars square Uranus) and the ability to take risks and stare danger in the face, but also a proclivity for accidents, especially with mechanical devices. The base opposition is across the 5th/11th house axis, highlighting his numerous and unusual friends (and detractors) and his love of a good time (5th house), which gets him into trouble sometimes (Saturn).

The latter point is further amplified by the Orcus contact with the Midheaven (MC), which is a prompting to stay on track, stay disciplined and to abide by the rules, which his Gemini Mars is loath to do. And with Mars in the 8th house, his bursts of initiative can sometimes have transformative effects, and not always in the direction he might have hoped or expected. This is further shown in his midpoints, as outlined on the chart. We’ll skip those here.

And then, lastly, in his relationships/partnerships there is further volatility indicated, with Eris on the Descendant and square the MC. He is always going to be one to play the devil’s advocate, to push people’s boundaries, to be outspoken with little care for the effects and always to introduce those elements that sets the fox in the hen house, to use the old saying. He once won a contest for a rude poem about Turkish PM Recip Erdogan, which we won’t repeat here. But it gives some idea of how he would handle foreign relations behind closed doors, or perhaps even out in the open. In that respect, his Gemini Sun plays the same way as that of Donald Trump.

For all the preceding reasons, this is probably why he was selected – because the Conservatives thought he would be the perfect foil to stick it to the folks in Brussels and push through the no-deal Brexit. We’ll see about that one, but his campaign motto, if any indication, was ““Deliver Brexit, unite the country and defeat Jeremy Corbyn.” That pretty much summarizes what the UK is facing with Boris at the helm, not that he will get very far with it. But not everything is as it seems, nor as his supporters would hope.

Part of his motto – “unite the country” – is going to be a very hard sell to the British public, with trust in politicians being at an all-time low, especially with the way the Brexit drama has unfolded in Parliament and the nation still very divided on Brexit. As for Jeremy Corbyn, if Boris fails to deliver Brexit, then pushing back Corbyn, too, will be a hard sell. If Boris fails in the next months a vote of no-confidence in the government would probably eventuate. And we see Conservatives and MPs already bailing from the Conservative benches. So, what do we see with the UK at the moment? The chart with directions and transits is below (bigger): 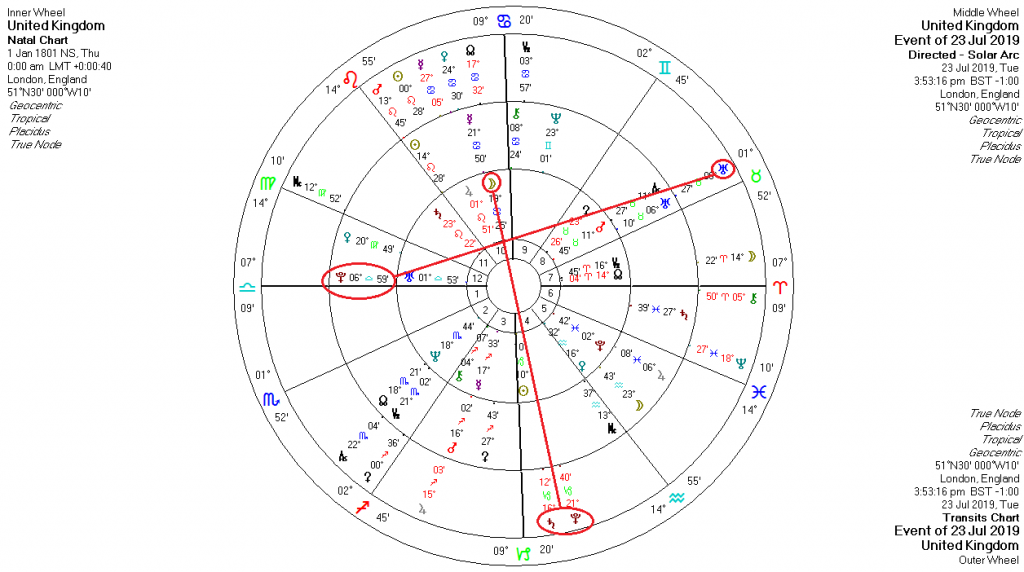 The immediate standouts are the transits of Saturn and Pluto opposite the UK Moon, with the Moon forming the midpoint between them. One of the interpretations for that is, “The tragic destiny of a woman”. It doesn’t get much clearer. May’s departure was “in the stars”, since the Moon rules the 10th house (the sitting government). The solar arc of Pluto on the Ascendant will be exact in two months, and transiting Uranus is now quincunx the Ascendant, throwing a wild card into the mix. Boris Johnson is certainly that. Pluto is a strong purgative of national issues and brings healing through upheaval. The UK is anything but united now, especially with that astrological setup. And with that we’ll leave this until we know the time for the swearing in, when we will thereafter be able to see the general fortunes of Johnson’s administration. (Continue to Pt. II)

In the meantime, here’s my tribute to Boris by The Who, written two years after BoJo’s birth, also remembering the featured pic when you hear the lyrics. There is more symbolism there than might be readily apparent.