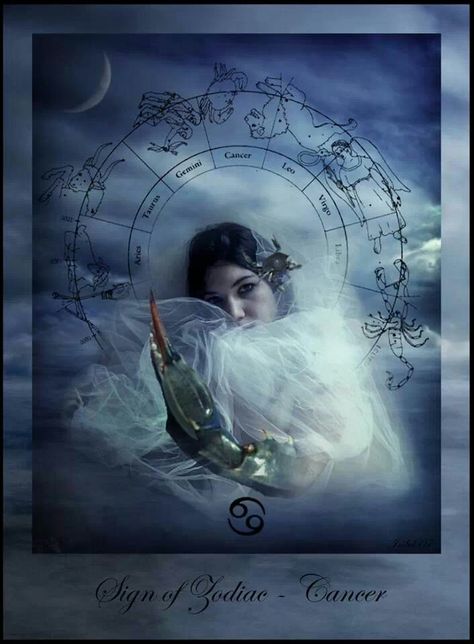 The first astrological quarter of 2020, starting at the Aries ingress, has seen many illusions shattered and others promoted. Most of all, it has signalled wider conflicts to come that are taking shape now. From the demonization of China by the US, the riots and protests that are taking place across the United States and Europe, the exposure of inadequacies (putting it mildly) in the approach of Western governments to the Covid-19 crisis, we see a world on edge, questioning old established orders and intensifying at various velocities worldwide. The next quarter, starting with the Cancer ingress of the Sun, will mark a breaking point in many areas. We already see it forming, but it will be accelerated through the 2nd astrological quarter of this year, from June through September.

This quarter, starting with the Cancer ingress, begins with an eclipse on an Aries point. It is a solar annular eclipse at the 1st degree of Cancer (0° – 1°). It will serve to change the world outlook. That will be the 2nd of three eclipses over the span of a month, the first one having taken place on 5 June this year. We might list them, then, and then proceed to look at what to expect for this quarter:

There is a little more to this than simply having three eclipses in a row, though. These three are of particular interest because they are all on significant points in the US horoscope. The last one takes place the day after American Independence Day celebrations. So, when those eclipses are activated by transiting planets – Mars in particular – they will herald events for the US. But that is not all.

Most of the world’s finances pivot around the US dollar in some way, and world manufacturing in the past few decades has centered on China. If that dollar were to collapse, or the US economy, then the world would be thrown into varying degrees of disorder, except for the Sino-Russian cooperative agreements. Europe and US allies would be particularly badly affected should the US experience major troubles. A new world order would emerge more quickly than it is now doing. Given that, where is the US most affected by these three eclipses? We have the following:

The eclipses will be activated by the Sun, in order, as follows: 7 Dec 20, 21 Dec 20 (Capricorn ingress) and 4 Jan 21. They will be activated in like manner by Mars on the following median dates: 29 Mar 21, 23 April 21 and 10 Jun 21, respectively. The activations by Mars will be in effect for a week on either side of the median date. For the Sun, the activations will be felt a few days on either side of the given dates. These eclipses will not be ‘finished’ by outer planet transits. Thus, the major effects will be seen by the Mars and Sun transits.

It is not difficult to see where the US is going at the moment. The President and much of Congress are in campaign mode. Consumer spending was down by around 50%. Unemployment is stated to be at around 13%, but the figure is probably much higher if the state of Georgia’s unemployment figures are anything to go by.

The nation is roiled by protests, with political leaders seeking to make gains from them. Bills are about to come due from the lockdowns. Enhanced unemployment insurance will run out at the end of July. Wages and overtime will be cut for those who can go back to work and for people who have worked through the lockdowns. The treasury is printing money at a record rate. And there is still uncertainty about the virus. Will it come back or not? The nation is very much on edge. And then, there is China. China is to be made the major campaign issue for Republicans. It’s a big gamble and will greatly sour relations with China.

The East is moving on since the virus hit. Oceania is also opening up now. Asian economies look much better at the moment than those of the West. Socialism in those nations has served them well and the people of the East are going forward in confidence, in general. With all this info in hand, the tone for the coming quarter is set. 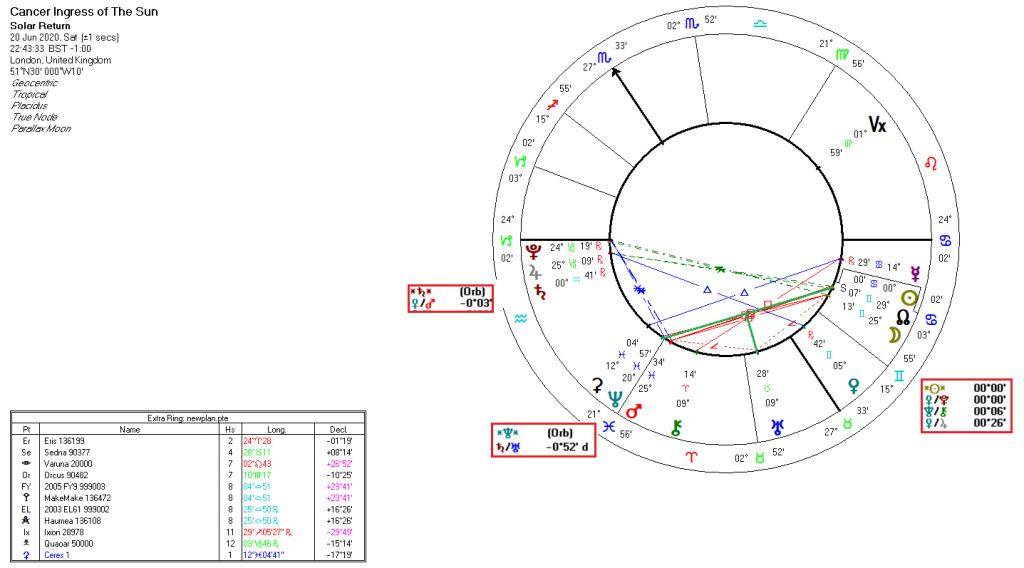 The Sun, Moon and north node are conjunct, as one would expect for a pending eclipse. The Moon is linked by quincunx with a Jupiter/Pluto conjunction, which will show the efforts in the media to win the masses back to confidence following the lockdowns. And in general, people’s moods will be looking up. However, the Sun is linked by quincunx to Saturn, showing that restrictions are still the order of the day, as they will still be in effect at the ingress for some nations. And then, the economy will not exactly be humming along in the West.

Inhibitions in expression will also be shown by the Saturn=Venus/Mars midpoint, and there will likely be a spike in divorce cases in the coming months. Added to that will be quick and irascible tempers, shown by the midpoint Uranus=Moon/Mars. Tensions are building in Syria and Libya, and between the US and China. And then we have Iran and Venezuela openly opposing and even taunting the US as Washington ramps up the sanctions against a number of nations, the ones just mentioned in particular.

Oil prices will remain down and the energy sector will stay sluggish for the West, though it is booming between Russia and China. The sluggish recovery in energy and the general feeling of weakness economically is shown by the midpoint Neptune=Saturn/Uranus, with Neptune ruling oil.

In all, this quarter will shape the election season in the US. Trump’s fortunes are probably going to continue to sour. And then we have Israel getting ready to annex the West Bank, or a large part of it, which is going to precipitate a conflict in the region. The Palestinians now have nothing left to lose. Their choice is either to give up and give in, or to stand and fight.

We may just see a 3rd Intifada. If so, that will involve the entire Axis of Resistance. If there is a major conflict in the Middle East, Trump will be between a rock and a hard place. That may be what we see for him mid-summer in the US. He will be beholden to support Israel, given his connections with Bibi, but a war in the Middle East would strain his re-election chances even further. The American public has no more stomach for war. Israel is looking at starting its annexations after July 1st.

In all, then, what we can expect for the Cancer quarter is indicated by the general aspects and midpoints to and by the Sun, as is the case in any solar ingress figure. We have the following midpoints:

The general tone is one of reserve and inward-looking reassessment of goals and existing initiatives. There is hope for good outcomes, but realities weigh heavy. There are strong possibilities for sudden upsets due to frustration and frayed nerves. Major focus on security for the quarter will lean toward the Middle East North Africa (MENA) region, where there is mounting instability due to the sharp drop in oil prices, lack of employment, sharp cuts to wages and sanctions cutting deeply into national purses. Add to that the plight of the Palestinians, and we see this will be an unpredictable quarter.

The Sun/Saturn quincunx can be a difficult aspect to move past. It represents old issues/sticking points that are difficult of resolution. That sets the primary dynamic for the quarter. The next quarter, at the Libra ingress, would appear on the surface to be better, with more movement forward and greater optimism, but there is a cautionary tale in that one, too, with some challenging planetary combinations. If proper measures are taken this quarter, in good measure, then the next quarter will yield better results. But the problem for the next quarter will be one of hubris and poor judgement, most likely the result of the frustrations encountered in the Cancerian quarter.

In all, the Cancerian quarter will bear careful watching and handling. Trying to move too far, too fast will only result in problems later on in the year. The Cancerian quarter will be the height of the convention season in the US electoral cycle. If the Republicans try to make China the central theme of their campaign and to blame China for the problems the US is facing it will not produce a favourable outcome, either in terms of the US economy or the world outlook. The virus is still with us. It will be a volatile quarter – best to take things low and slow. It is a better time to build community at home than it is to point fingers outside and blame others for failures in leadership.

3 Replies to “The Cancer Ingress 2020 and three US eclipses”