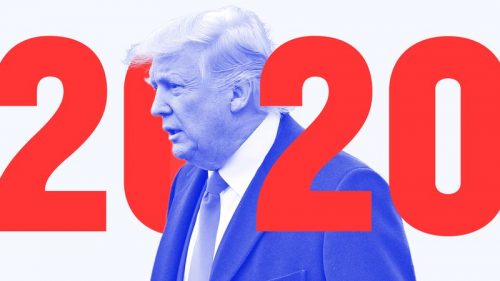 As the saying goes, forewarned is forearmed. Reading a chart is like reading a road map when it comes to forecasting. Road signs carry information, about road conditions ahead, warnings, directions, regulations and so forth. Transits, progressions and directions in astrology do likewise in the context of a person’s chart and the prevailing environing conditions. I have been seeing predictions already about the upcoming US election in 2020, and though it is very early to be doing so, I decided to have a look. There are warning signs ahead.

Many of the predictions I have seen forecast a Trump victory in 2020. Given the current approach of the corporate Democrats in the US to Trump and the election in general (the controlling majority of Democrats), the predictions of a Trump victory are probably true. Barring any unforeseen circumstances, Trump will probably claim victory with an easy majority, depending on who the Dems choose to run against him. There are no viable third-party candidates, unless that candidate happened to be Bernie Sanders. However, from what I see regarding Trump, any victory he claims will be short-lived, and not because of opposition to him, but because of the man himself.

Let’s look at a few facts about Trump. He is not young. This June will be his 73rd birthday. He is overweight. He does not eat well, instead eating a steady diet of junk food. He has perhaps the most stressful job in the world. Add to this the psychic atmosphere that surrounds him – the constant attacks on his character and policies and the vitriol directed at him – and we have a very toxic mix of factors, all of which weigh heavily on his health. What do we see astrologically that might perhaps indicate something coming up for him? Trump’s chart at the 2020 election, with transits and directions, is below (bigger): 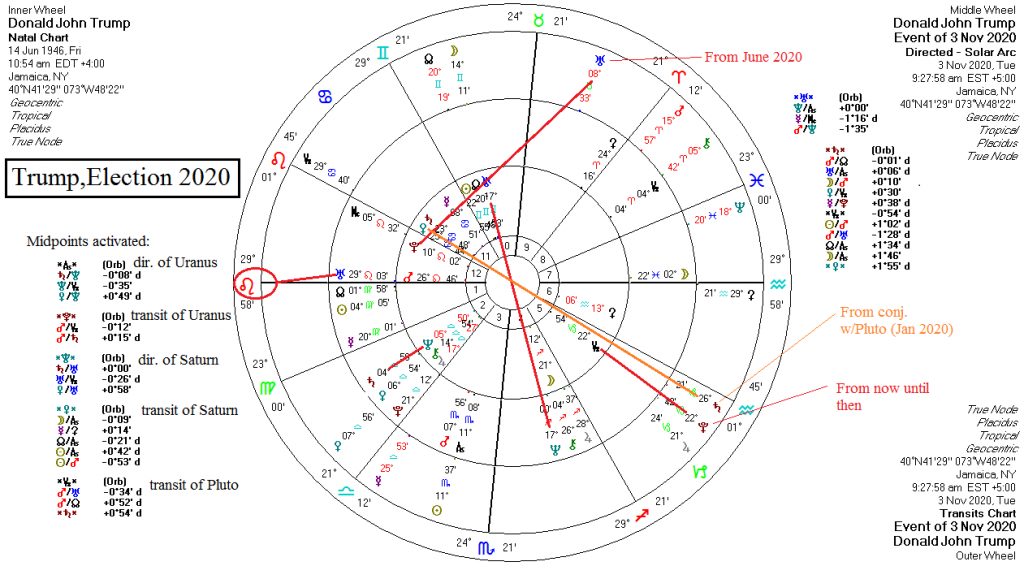 Consider the following midpoints that are there in his natal chart and then by activation, starting in mid-September of 2020, and a few before:

Taking all of this together, what might it mean? The transit of Uranus square to Trump’s Pluto starts in the first third of June 2020, where it will stay within its one-degree orb until just before the November 3rd election. It makes its retrograde station square to Pluto on 15 Aug 2020. That is a powerful set of factors, and it will produce one of two (and maybe both) things: A real test of strength, meaning that he will be sorely tested, especially regarding his nerves, will be subject to explosive outbursts of temper (more than usual) and may commit the country to something quite violent – which can mean many things – or…he may be suddenly struck down by something. Illness is more likely with the latter.

The implication with such a set of factors is ‘intervention by a Higher Power’. ‘Higher Power’ in the sense of this midpoint set normally refers to what we might call an ‘act of God’, such as a natural disaster of some sort, but can mean many things. Speculation as to what might happen is really premature and pointless now, but if I had to hazard a guess, I would say that his health will greatly suffer, given what was outlined previously.

At the same time that Uranus makes its retrograde station square to Trump’s Pluto, transiting Mars makes a square to his Saturn. If this is any sort of indicator, we have a good example of the sort of decisions he can make under such an influence (Mars, that is). The last time it was transiting that point was at the end of January, first of February this year, which is when the Justice Department moved against Huawei and Trump pulled the US out of the INF Treaty. The time before that was just after he took office, at the end of February 2017, when he signed an executive order removing the restrictions on people with mental illness from purchasing firearms. It was also at the height of the judicial wrangling over Trump’s travel ban on Muslims, with him signing his second such order on 5 March that year. At the time Uranus was also squaring his Saturn. But probably the most indicative item from that period were the moves by the opposition to instigate the special investigation into collusion that would become the Mueller report. The investigation was started in May of that year, about the time Mars transited over Trump’s Sun.

But there are other factors affecting him in the run-up to the next election. The direction of Saturn to his Neptune, activating his 8th house, denotes a transformative event, and is also a ‘health direction’, as indicated previously. This is the one that comes into effect in mid-September of next year. It also brings a host of other midpoints to bear on that Neptune, as shown on the right side of the chart. We won’t go over all those here, but the most potent indicators are for him to be undermined somehow, with relationships suddenly going sour.

The direction of Uranus to his Ascendant activates his ‘illness axis’ which gives, according to Ebertin: “Illness caused through excitement or upsets, a weakness or illness manifesting suddenly.” That comes into orb a month before the election.

Then, finally – as if that is not enough – there is the direction of Neptune to his Uranus. His midpoints to Uranus (shown on the right side of the chart) show his suggestible nature, his unpredictability, his ambition, the tendency to be defamed and hindered by others and sudden changes in his energy levels. These midpoints go far toward giving us the Trump that we know. And with Neptune being directed there? The 2020 election will be like no other we have seen in living memory. That direction comes into orb at the same time as the direction of Uranus to his Ascendant, a month before the election.

If Trump makes it that far, as in to the month before the election, the stresses on him will be great, far greater than what we have seen. If all this sounds very negative, it could be taken that way. But what the preceding shows are the stresses he will be under in the time leading up to the election. Then, the question is, are there helps to him, via transits, progressions or directions? Not many, as it turns out.

Starting in October of 2020, he will have transiting Uranus sextile his Mercury, which will give him control over the narratives in the election, or will help him in that direction. It will enable the fiery and unpredictable rhetoric for which he is well known. It also shows tech support, as in Cambridge Analytica-type support, even though that organization is now defunct. But you can bet that the computer algorithms run by his supporters, trawling social media, will be working overtime.

Further, there has been an applying progression of Jupiter to his Midheaven that will be exact toward the end of May, a quincunx, but that will be separating by the time of the election. Right now he has had some good fortune due to the release of the Mueller report, but that has only caused some factions in his opposition to double down. But there is something here that is of even greater interest than Trump, and it relates to the transits and directions to the US chart.

If the Sibley chart for the US continues to prove itself – and I see no reason for it not to – the 2020 election will mark a turning point in US history. And it will bring mixed blessings and reactions, depending on where one sits on the issues. The transits and directions to the US chart are below (bigger): 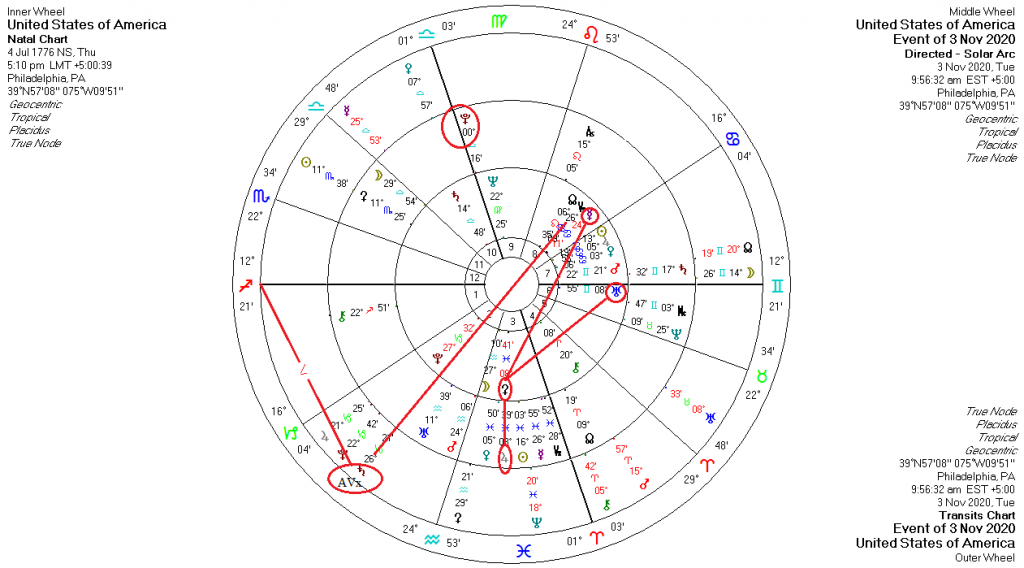 There are three main points that stand out:

This setup reminds me of the Brexit drama, which is still ongoing, especially the solar arc of Pluto. Changes are coming at the top in the US. The seriousness of issues will be right at the forefront of people’s minds, as indicated by the Saturn transit to the Vertex axis. It also might signal a fated event, which will be in the nature of a necessary adjustment of the world view of the US. But there is opportunity in this as well as a turning point – one for the better – as indicated by the Jupiterian direction to the US Ceres. That combination of planets involved in the Jupiter direction points to  far-seeing plans, optimism, a clear grasp of the matters at hand and a fortunate turn of events. Again, depending on one’s point of reference – pro-Trump, anti-Trump, libertarian, socialist, et al – such a combination of factors can be seen to the advantage, or disadvantage of any of the parties involved. It will not mean the country is united. Probably quite the opposite given the current trend of American politics. But it does point to a marked change of direction, and a breath of fresh air.

One can read anything into the preceding remarks. But the main takeaway from this discussion is that we are entering a very interesting and vibrant point of change in the US situation. Trump may well be reelected, or he may not. Either way, that is not the important consideration. Of far greater importance is what the coming changes will mean for the US in general and in the long term. And if Trump were a client (he isn’t), I would be advising him strongly to watch his health, to take things easier, to watch his flanks, consider his decisions carefully and to gather his friends around him. He is going to need them. He is about to enter one of the most stressful periods of his life. But that also sounds a note for every US citizen and friend of the US. Forewarned is forearmed. Look upon everything that comes as an opportunity to advance the nation.