Some of the best views of a comet we have had in recent memory are taking place in the northern hemisphere over the next few days. Just after sunset from now to the 23rd, Comet NEOWISE will be visible near the Big Dipper, also known as the main asterism in Ursa Major. To the Italians, it is the Chariot. But to the ancient Chinese, the constellation had great political significance. In esoteric astrology the asterism is known as the Seven Rishis, the source of the seven rays, the fundamental qualities of consciousness that inform our local universe. Comets are said to be the seeds of future worlds, bringing in significant new qualities when they are visible. So what does our newest visitor have to convey to us in this time of international crisis, and especially, what is the significance of it appearing near the Seven Rishis?

To begin our look at this latest fascination and messenger, we have a look at its astronomy and characteristics. Its systematic designation is C/2020 F3. From various info we have, Comet NEOWISE is a retrograde comet with a near-parabolic orbit discovered on March 27, 2020, by astronomers using the NEOWISE space telescope, hence the comet’s name. Data from the WISE observations: S2020 03 27.71352 07 00 39.56 -48 50 52.1   17   RLEG005C51. It currently exhibits two distinct tails, one of water/ice and dust and the other of sodium. The sodium tail is what gives it its brightness, only observed in the brightest of comets. Its designation denotes that it is a non-periodic planetary body. It has a diameter of app. 5 km/3 miles.

The coordinates at its discovery placed the comet in the constellation of Lynx, near the star 50 Cam, at approximately 25 degrees of Cancer in the projected zodiacal longitude. Regarding the constellation, we have the following:

“The Lynx has often played an important role in mythology, because it is such an elusive, ghost-like animal that sees without being seen. Because of its qualities of silence and watching, the Lynx has also been associated with scientists, and the search for knowledge”. They were supposed to be able to see through objects, through walls and underground, Plutarch saying; “the lynx, who can penetrate through trees and rocks with its sharp sight.”

In some American Indian traditions, the lynx is known as the keeper of secrets and the knower of that which is hidden – occult knowledge, in other words. With this constellation, then, we have the qualities of occult knowledge, capacity for scientific investigation, clairvoyance (also connected with ‘seeing without being seen’) and the ability for solitary work of a deeply investigative nature. It can also carry the connotation of spying and covert investigations.

The world conditions at the time of its discovery were amidst the growing pandemic. The US had just surpassed Italy and China in the number of COVID-19 cases (becoming #1 again), militants in several hot spots had just agreed to a ceasefire, the 2020 summer Olympics had just been postponed until the following year, the epidemic in China had just been brought under control, and on the day North Macedonia became the 30th member of the NATO.

The discovery chart is below (bigger): 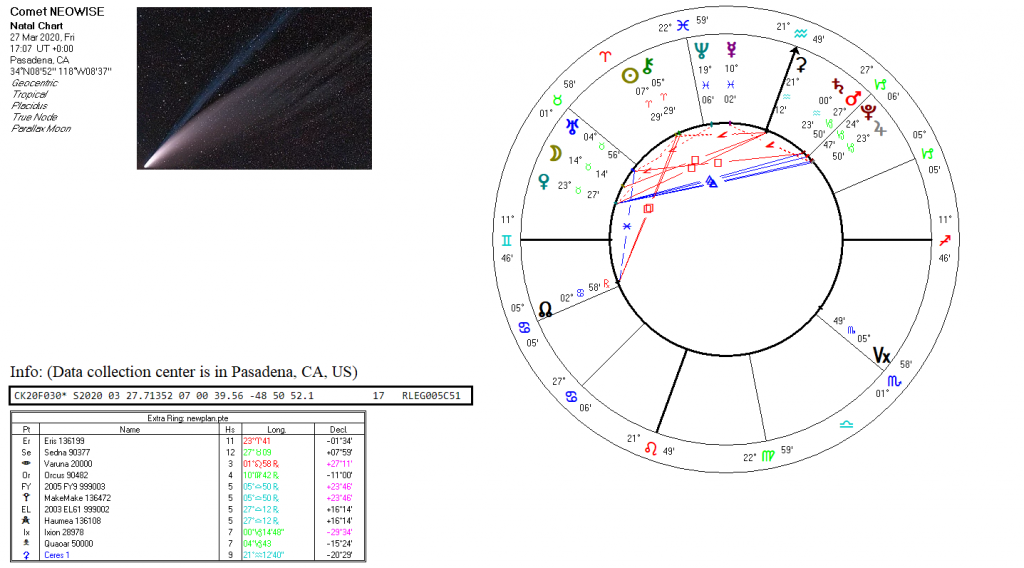 Since the telescope is located in space in Earth orbit, no local coordinates are available, not that it matters. The data collection center for the telescope is in Pasadena, California, so we use that as our geocentric location. The main consideration here are the planetary aspects in effect at the time and constellation in which the comet appeared.

The main feature of the chart is a stellium in Capricorn comprised of Mars, Jupiter and Pluto all conjunct Saturn, the latter in the 1st degree of Aquarius – a ‘dissociate stellium’. Venus is trine to the stellium. Within the stellium we have the midpoint Mars=Saturn/Pluto: “Brutality, assault or violence, ruthlessness. – The necessity to fight for one’s existence or life, maltreatment.” That certainly describes what we have had at the time coming out of Washington. Instead of working toward international cooperation, the Trump administration was blaming everyone else for troubles and stepping up sanctions on Iran, and Venezuela. Washington appeared to be becoming unhinged.

Shortly before the discovery of the comet, the Saudis decided it would be best to send the price of oil plummeting, thus upending the US shale industry. Just after the comet discovery, Trump looked into discussions with the Russians to try to offset the collapse of the industry. It didn’t go very far.

Throughout the period from the end of March to now (the period while this comet has been in the news and visible), we have had the protests in the US along with its rapidly crumbling economy (though not to hear the media talk about it), the UK and US declaring economic war on China and seeking to provoke it in the South China Sea, the Chinese and Indian skirmishes in Kashmir, another attempt at a Russia-gate type of scandal (which was quickly debunked), the escalation of tensions in Libya, escalation of the financial crisis in Lebanon and the CIA attempts at provoking a crisis in Iran through sabotage of Iranian infrastructure.

The preceding goes along with another midpoint structure in the stellium, Mars=Jupiter/Saturn: “A lack of endurance or tenaciousness, discontent, an inconstant will. The desire to enforce a change of circumstances and conditions in life, the act of separation.” That represents the governments of the US and UK seeking to force people back to work. That midpoint has gone along to contribute to the unfolding of events.

Then, with the trine by Venus to the stellium and thereby the midpoints, there is the call for justice we are seeing in the protests and the desire to bolster material circumstances (Venus in Taurus) by trying to get people back to work and move ahead from the lockdowns that were in place at the comet’s discovery.

Now, we find the comet in the constellation of Ursa Major, the Great Bear, where it will fade from view. That is a statement in itself. The Great Bear as a constellation has always been associated with leadership and government. To the ancient Chinese, the seven stars were the Government, with the four stars in the dipper known as the Heavenly Reason. Now, the point of mentioning this is that perhaps as the comet fades, leaving its final message, governments in the world, especially in the US and UK, will return to some semblance of reason. We can only hope. Then, there is the more esoteric view of comets.

The ancient adepts (initiates) had the following view on comets, this written in the 19th century:

Born in the unfathomable depths of Space, out of the homogeneous Element called the World-Soul, every nucleus of Cosmic matter suddenly launched into being begins life under the most hostile circumstances. Through a series of countless ages it has to conquer for itself a place in the infinitudes. It circles round and round between denser and already fixed bodies, moving by jerks, and pulling toward some given point or center that attracts it, trying to avoid, like a ship drawn into a channel dotted with reefs and sunken rocks, other bodies that draw and repel it in turn; many perish, their mass disintegrating through stronger masses and, when born within a system, chiefly within the insatiable stomachs of various suns. Those which move slower and are propelled into an elliptic course are doomed to annihilation sooner or later. Others moving in parabolic curves generally escape destruction, owing to their velocity.

Some very critical readers will perhaps imagine that this teaching as to the cometary stage passed through by all heavenly bodies is in contradiction with the statements just made as to the moon’s being the mother of the earth. They will perhaps fancy that intuition is needed to harmonize the two. But no intuition is, in truth, required. What does science know of comets, their genesis, growth, and ultimate behavior? Nothing – absolutely nothing! And what is there so impossible that a laya center – a lump of cosmic protoplasm, homogeneous and latent – when suddenly animated or fired up, should rush from its bed in Space and whirl throughout the abysmal depths in order to strengthen its homogeneous organism by an accumulation and addition of differentiated elements? And why should not such a comet settle in life, live, and become an inhabited globe![1]

Then, there is this in addition, written a few decades later:

Question: Had the reappearance of the Halley comet any influence on the Earth, and has it anything to do in increasing the vibration at this time?

Answer: It had very much to do with it. No heavenly body could come so close to another body, as the comet in coming to the earth, without affecting it greatly in all respects. It could not increase the outer vibrations of the atmosphere and earth itself without affecting the inner sphere of the planet therefore there will be much excitement in all lines of life. The influence of the comet is not necessarily malignant. It has been supposed to be so, but it is not. It is the coming so close to the earth that affects it. The comet is a world in the process of building an embryonic world.[2]

The ancient Chinese kept impeccable records of comets over millennia, unsurpassed in accuracy until the 20th century in many cases, and astronomers have used those records to calculate the periods of many comets. The Chinese kept such records because they recognized comets as harbingers of change. Halley’s Comet was quite familiar to them. However, in their astrology they tended to see them as malevolent influences, referring to the preceding quote. Their ancient history, as was the case in most of the world at that time, was militaristic. Change was not viewed in a positive light unless it followed lines of succession. And their astrology was strictly for use in the Imperial Court until recent centuries.

Seeing that Comet NEOWISE graced our skies just after the Aries ingress, perhaps it carries a message for the future, the Sun in Aries conveying that sort of pioneering dynamic. Its discovery in Lynx has certainly served to open people’s eyes to a great many things. But there has also been quite a lot of interference from behind the scenes, leading to some violent activity. The lynx is a predator, after all, and predatory capitalism has certainly been on display through this period. But most of all, this period has served to put government officials and experts of all stripes under the public microscope.

The projected zodiacal longitude of the comet in Cancer gives rise to indicators of changes in public consciousness, with a great desire to see justice done, a fairer distribution of wealth and an end to funding of police forces and militaries at the expense of public welfare. This comet may also represent a change of the guard at the top levels of government in many nations. That will be one to watch in the US and Western Europe.

One Reply to “Comet NEOWISE”