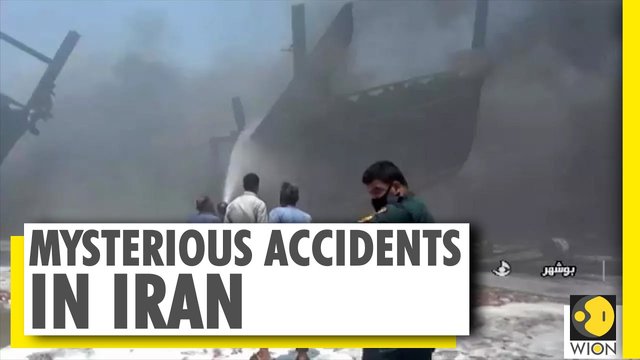 Iran has had a run of incidents of late that have many people pointing fingers at Israel and the US for sabotage. There have been fires and explosions reported on nearly a daily basis since 25 June, one at a missile production facility and one at the Natanz nuclear facility. There have been others at non-military installations. Activity on the internet after each of these incidents has led to wild speculation as to the causes, but no conclusive proof. For pro-regime change people it would seem to be a move toward a dream-come-true. But what is really taking place and is this a concerted effort to spread panic through Iranian society in hopes of overthrowing ‘the regime’? Or is it something else?

We have a list of the major incidents and the timeline as follows (update as further news arises):

That’s quite a number of violent events. Western media sources always overstate the effects of such incidents on Iran’s infrastructure and populace and paint a picture of a nation always on the edge of collapse. Then again, Iranian sources will downplay or deny such events. The Israelis like to take credit for them. It plays well to their domestic politics at home. What is one to believe?

The big question here is what in the world is going on with Iran’s chart that would show such a wave of explosive events? There is a simple explanation as it turns out. Iran’s chart with transits and directions is below (bigger): 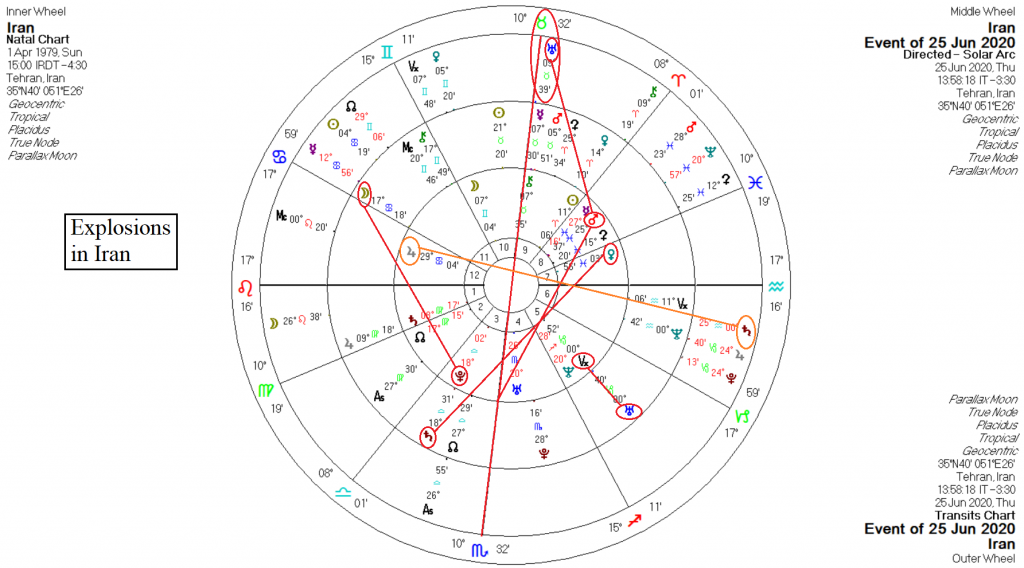 The most obvious features of note are the transits of Uranus to the Iranian MC, which was within orb when the series of explosions started, and a Mars return that would cross Iran’s Sun just prior to this writing. Uranus will reach the exact conjunction with the MC on the 28th of July. In addition, the same transit also tracks a semisquare to Iran’s Mars. Explosives and explosions are co-ruled by Mars and Uranus. With both of those in aspect to the Meridian axis, both the leadership of Iran and its infrastructure are affected.

In addition, we see transiting Saturn going back and forth across from Iran’s Jupiter, a frustrating and restricting transit that will not finish until the end of this year. But the question many net denizens want answered is whether or not these explosions are acts of sabotage. Sabotage is ruled by the 12th house, Neptune (covert) and Pluto (overt). Iran’s 12th house is ruled by Cancer and the Moon.

There are currently no transits or solar arcs to Iran’s Moon. However, the directed Moon is square to Iran’s Pluto from the 12th house, which shows heightened emotional tensions and possible sabotage from emotional concerns. If there are foreign actors involved then the aim would be to sow panic in the population. So far that is not working. Then, a larger question arises as to whether or not this could be a prelude to regime change in Iran. One would have to look to the ‘revolution midpoints’ for that (Ura/Plu, Mars/Ura, Mer/Ura, Ura/MC, Sun/Ura), specifically to the Ura/Plu midpoint.

The directed Uranus/Pluto midpoint is currently a few degrees behind the Iranian Chiron, and will take a few more years before it arcs up to be within its 3 – 4 degree orb with the Midheaven, needed to indicate a possible regime change. A lot can happen in a few years, and a ‘revolution’ can mean many things. For example, the Iranians are in process of inking a deal with China to extend over 25 years, involving expanding economic, military and political cooperation. That has been in the works since 2016. A fairly thorough accounting of it was give by an ex-ambassador from Iran who was posted in China.

Lastly, as for directions and transits, the transit of Uranus has been at the Iranian Sun/Moon midpoint. That midpoint is indicated in the making of contracts between friends and intimate relations, as in marriage, and is also an indicator of the birth of children. Uranus, representing the ‘urge to better conditions’ came within a degree of orb to the midpoint in the last week of May this year.

The aforementioned deal came to the attention of the general public the last week of June. The West is not happy about it, because it represents a dramatic shift in the geopolitics and security balance in the region, to the disadvantage of the US, Saudis and Israel. Note the timing of the reporting on the explosions and the publicising of the Iran-China deal. Because of the sanctions imposed by the West, Washington especially, this deal will bring quite a bit of relief to Iran, thus further enraging the hawks in the Beltway. There is another consideration, too – another deal the Iranians have just struck – two, actually.

A bigger immediate concern for Washington than the Chinese deal, perhaps, is the one just confirmed between Syria and Iran. Iran has just signed a deal with Syria (8 July) to boost its air defences, as in anti-aircraft missiles of the type that shot down the American drone last year. The two nations have had a firm military alliance since 2006.

The second deal just mentioned is not so much a deal as it is an acknowledgement by Hezbollah, the de facto second arm of the Lebanese government, that they needed to ‘go East’, as in to China and Iran, a statement that has caused a storm in Washington. Nasrallah doesn’t mince his words. As a result, Hezbollah is storing hundreds of tons of food, sent by Iran, in makeshift warehouses on the Syrian-Lebanese border. It is a move that will prevent starvation in Lebanon as their economic crisis worsens.

Hezbollah is seen as a major source of trouble in the Middle East, but is at the same time a key member of the Axis of Resistance. Even though the Lebanese state may collapse into chaos, it will do nothing to curb Hezbollah, nor Iran in Lebanon. And in another move that is further frustrating Washington’s efforts in Lebanon, Iran has agreed to accept payment for that food and oil in Lebanese lira, which will bypass US sanctions, and which it can use locally to support other efforts.

Given all the preceding and seeing the ire rising in Washington and the rising insecurity in Israel, it would be easy to think that either Israel, the US or both, are fomenting these events in Iran in an effort to either provoke a war to cause Iranian instability. But the truth, as it turns out, is otherwise.

In a typical Iranian summer, where temperatures can reach as high as 46° C/115° F in the region of Avaz, where many of these incidents are taking place, fires and explosions are a yearly occurrence. There is nothing nefarious about them.

In fact, thus far there have been fewer fires and explosions this year than there were last year at this time. And there was not the level of conjecture of Israeli or US sabotage or spoiling for a fight this time last year with Iran. The difference this year is the looming US election and Bibi’s troubles in Israel. There was one exception in the events of this year which appears to have been a deliberate act of sabotage, and that was at the facility at Natanz. The US was likely behind it.

Iran will retaliate for the attack on the Natanz facility. It will do so in its own time and way, and probably indirectly, through other members of the Axis of Resistance, and at a time that will be the most disadvantageous for Trump and Netanyahu. It will be a case of plausible deniability as far as the public is concerned, but the message will be received by the appropriate parties.

But as for the other explosions, more likely than not they are a combination of poor infrastructure, bad management, extremes of temperature, normal accidents or even ‘acts of God’.

The question might well be asked, then: If these fires and explosions happen every year, what would explain that astrologically? And why is this year any different in astrological terms? There are simple answers to those questions, too.

Infrastructure is ruled by the 4th house. Iran’s 4th house cusp receives heat, in a manner of speaking, from Mars by sesquisquare, and from the 8th house (losses). Extremes in high temperatures will aggravate any weaknesses in Iran’s infrastructure. In addition, Mercury is retrograde in Iran’s chart, conjunct Mars and in the 8th, showing glitches in technology that can precipitate losses. That also goes to show the fiery rhetoric that can come out of Tehran.

Iran’s IC is ruled by Scorpio, and by default by Mars and Pluto. Pluto is in a wide opposition to Iran’s Sun in Aries, which goes to show their implacable nature, but also shows up the sometimes disastrous events that take place in their infrastructure, heat-related (Aries Sun).

The main difference we are seeing with Iran this year is the transit of Uranus opposite Iran’s Sun/Moon midpoint and conjunct their MC, which points to their strategic decisions regarding Syria, Lebanon and China, rather than fires or sabotage. In short, they are thinking outside the box and looking to the future, which is right in line with the positive use of a Uranian transit. The attempt to destabilize or undermine the nation through stoking public fears via talk of sabotage and war is shown by the Moon’s direction to Iran’s Pluto – the public and infrastructure, again.

In summary, aside from the Natanz facility, this appears to be a comparatively quiet year as far as Iran’s emergency services goes. The Iranian authorities are not downplaying the situation there, from a closer examination. Instead, what we are seeing is a decisive shift eastward, which has the usual suspects (Israel, the US, the Saudis, France and the UK) quite alarmed – hence the attempt to sow fear amongst the Iranian populace.

The Israelis will not get their war. Instead, the Iranians will make them sweat in the heat of their summer, waiting for the inevitable response to the Natanz attack. And by the way, it is said that facility will be restored to its pre-explosion condition within about six months – just after the US election and in the midst of Bibi’s troubles. And in the meantime, the Iranians are poking a little fun at America’s ‘suspicious’ explosions and fires. The regime in the US is downplaying the situation.