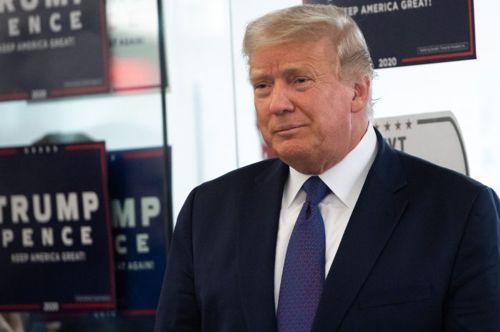 In a previous post on this site we had a look at Donald Trump’s adventure with the coronavirus and resulting COVID-19 illness. We have all probably seen doubts as to his ever really having had the illness. But his astrology clearly showed it, and his subsequently being healed of the disease. In this post we want to look a little bit ahead, because there was more to Trump’s story than was covered at the time. As well, we will look at the course of his illness and why, as so many people had hoped, Trump was not finished off by COVID, either by death or in leaving office. Trump’s troubles are not over, however, and there remain other possibilities for health matters to crop up. This is not a post on wishful thinking or warning, but instead a look at his situation in the light of cold analysis.

We won’t cover the course of Trump’s brush with the virus here. That was covered in the previous post. In that post it was mentioned that there were no immediate factors that indicated the course of the illness except for the transiting Moon. That turned out to be the key indicator for the outcome of his experience. At the time of his diagnosis the Moon was transiting between his 7th and 10th houses, showing rising fortunes, as transits through that sector of the chart generally do, as a trend. However, if the 8th house is strongly implicated, death can occur when the Moon transits there, barring other helpful factors. Trump had some of those helpful factors present.

The transits at the time of his diagnosis showed the Saturn/Pluto conjunction trine his MC, Mars trine his Mars, and transiting Jupiter and Neptune in sextile, the latter ruling his 8th house. The transits showed he would surpass the illness and receive good treatment. I left the outcome of the situation as an open question at the time. However, it was clear he would not be leaving office, as shown by the Saturn/Pluto trine to his MC.

In the concluding remarks to the previous post on this, the following was put forward:

In all, this week will tell if Trump’s condition is to worsen or if he will be on the mend. But since he is this far along with the illness already, the chances of his being able to fully function any time soon look slim. Right now we are seeing the dexamethasone bolstering him, so we cannot be certain if this is the true Donald Trump right now. Boris Johnson’s case of it in the UK should serve as an example. He is still not well from it, and his stint in hospital was several months ago.

Trump was released from hospital on the 5th of October. The Moon was then on his MC, trining the Saturn/Pluto conjunction. He was humming on dexamethasone at the time, a powerful steroid usually given to late-stage patients with the disease. On the day of his release he made his speech from the balcony of the White House, in what many comments in the Twitter-sphere called his ‘Mussolini moment’. The question then arose in people’s minds, was he really sick or was this a pre-election stunt? It’s a valid question, knowing Trump’s penchant for grandstanding and making bold statements, consistent with his natal Mars/Ascendant conjunction in Leo.

The illness is clearly shown in his chart, again from the previous article. So, why didn’t it ‘take him out’, as his detractors hoped? We just described the transits, showing the astrology of why. But there is another reason which cannot be ignored: He had the best, most aggressive treatment money could buy in the US, plus the fact he was hopped up on the steroid. Had he not had that treatment, it is very likely he would have had a very rough time of it. His behaviour over the next few days gave dramatic testimony to the effects of that steroid. People are not generally given that powerful drug if they are not ill.

Watching his performance on the balcony, it is clear that Trump was still having trouble breathing. But given the election was upon him, and given his Leo/Mars Ascendant, he had to show strength to his voting base, plus send the message that he was still on top of things and that a ‘little ‘ol virus’ was not going to stop him or the country. It was also a dig at the Democrat base, who have urged proper health measures all along and who have chided him for what health professionals have called the poor handling of the virus in the United States. We won’t go into opinions on the latter here.

Given the preceding and the fact he is now clear of the virus, there is nothing more to say, right? He’s out of the woods and there is no further cause for concern, is there? Not so fast.

There is a particular direction in Trump’s chart that is still in effect and has not reached exactitude, and the transits have changed since his hospital stay. The chart is below (bigger): 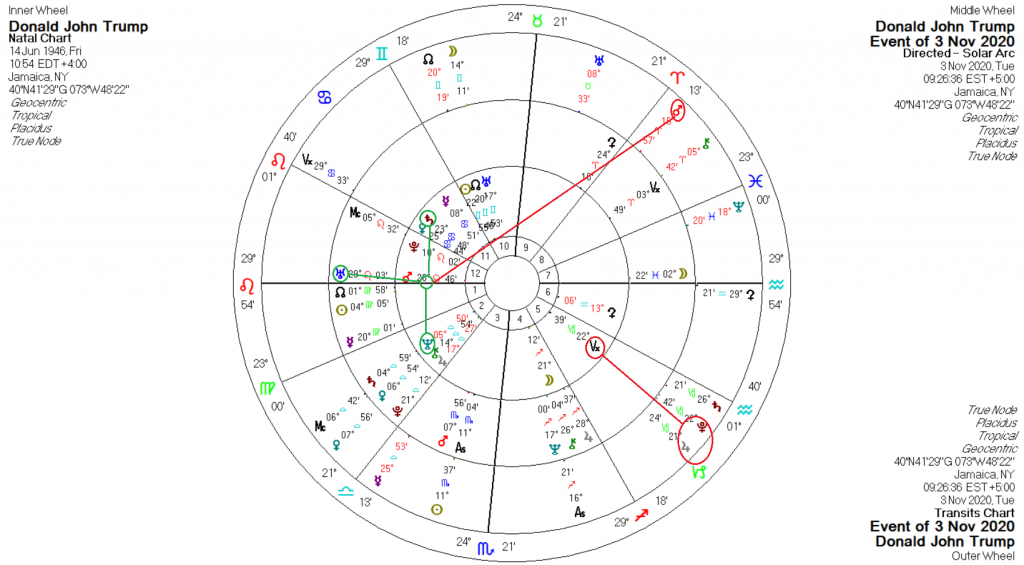 The main direction to which we refer here is that of Uranus conjunct his Sat/Nep midpoint – the ‘health axis’. That axis lies at 59°49’ natally, and his directed Uranus is currently, as of Election Day, at 50°03’. Thus, it will not be exact until mid-August next year. That direction is also conjunct his Ascendant, to be exact in late September 2021. That setup – Asc=Sat/Nep – bears a closer examination, because with Uranus affecting it now, it shows the increasing changes in Trump’s fortunes, and not in the best way.

From Ebertin, the natal midpoint reads as follows: “An emotionally depressing environment, oppressive family circumstances, emotional suffering caused by other persons, limitation of freedom.” This shows his early upbringing, which we won’t get into, except to say he did not have a happy childhood. Biologically, the reading of that midpoint is, “The chronic and unhampered progress of malady.” Sociologically, it reads, “Poor, sick or depressed persons.” And as to probable manifestations, we have:

+ The methodical execution of plans, the slow attainment of success through intense activity and great painstaking effort.

– Painful or tormenting emotional inhibitions, undermining circumstances also leading to a state of illness, neuroses or diseases with causes difficult to ascertain.

The bolded text will be important directly. The other natal midpoint to Trump’s Ascendant by the 90° modulus is Venus/Neptune. Venus and Neptune are quintile in his chart, and the reading is as follows: “A peculiar disposition with regard to love-life, impressionability, a lack of good taste. – A union with persons of a peculiar disposition, disappointment in love.” We won’t get into his love-life here, either, but the bolded text in the midpoint reading is quite descriptive of his malleability and his associations with ‘people of peculiar disposition’. Roy Cohn and Steve Bannon come immediately to mind.

With the 45° modulus (‘hidden midpoints’) the outlook is much extended. The most notable midpoint there is our ‘revolution midpoint’ – Uranus/Pluto, the reading of which is: “Being placed in an unusual or restless environment. – Applications of force, an accident.” All of these midpoints to his Ascendant natally describe his early life and the forces and environment that shaped Donald Trump. And now, with Uranus there by direction we see very strong activations of them, as well as great changes taking place in his life.

Any planet or midpoint conjunct the Ascendant ‘speaks’ through a person. The rising sign and degree rules one’s self-expression and appearance. With Mars conjunct Trump’s Ascendant, we see the bombast, the fearless attitude, the need to be and appear strong, the combative attitude and so on, all qualities we would expect from Mars. Add to that combination the Leo Ascendant and Mars in Leo and you have the typical image of Trump. It is small wonder he acted the way he did when he found out he had the virus.

However, although Mars is conjunct Trump’s Ascendant, it is not contained in any of the aforementioned midpoints and thus is not being activated by the Uranus direction. We saw that almost four years ago, instead, when directed Uranus was on his Mars, starting within orb in June 2017 and showing his more reckless decisions in foreign policy. Prior to that, his progressed/directed Sun was on his Ascendant, showing his victory in the 2016 election. Directed Uranus was also squaring his Meridian axis then, showing his unexpected victory over Clinton.

Now, coming to the present day, a rather interesting scenario has arisen. From the preliminary analysis of the election, we see that Trump’s lead is weakening in the key swing states that would give him the election. And as of this writing, Biden only needs to win Nevada to give him the Presidency. The day after the election (4 Nov), Mars entered within a degree of the sesquisquare of the Saturn/Neptune midpoint, where it will stay for the most of this month.

At the same time (4 Nov), transiting Jupiter came within orb of his Vertex, which is ordinarily very helpful. The latter is keeping his mood up and giving him vision for a victory. With other factors, that might be true, but the Mars sesquisquare will outlast it, and the factors that won him the last election are missing this time. He will still have help in his present battle, though, and he is contesting the vote. The Jupiter conjunction will be exact on the 11th, after which that influence will rapidly pass.

That combination – Mars=Saturn/Neptune – forming a hidden midpoint (45° modulus), has the following reading: “Lack of energy, listlessness, lack of creative energy. – Weak procreative powers. – Inactivity through emotional depression or sickness.” No sooner had Mars entered into orb with that midpoint, within a degree, Trump’s fortunes in the election began to change for the worse. That doesn’t mean he would go down without a fight. He will fight and fight hard for every vote. But the astrology that supported him at the last election simply is not there now.

Trump is also not out of the woods with the COVID, either. Sometimes it takes months to get past all the symptoms of the disease, even with no signs of the virus showing, and he is showing obvious signs of fatigue that have not been there in past whirlwind campaigning. There is nothing to say he cannot contract another illness. Mars will square that midpoint at the end of February next year and Saturn, Uranus and Neptune will all be aspecting his luminaries. The man needs to watch his health.

If Trump does manage to pull off this election he will not be having an easy time of it going into and immediately after the inauguration. The nervous strain on him will be enormous, and is actually so now. Looking back at the natal Sat/Nep midpoint, one of the indicators for that is ‘neuroses or diseases of uncertain origins’. Then, in April transiting Uranus makes its final pass square his Pluto, which was in effect when his brother, Robert, passed on. Pluto is at the midpoint of Trump’s Mars/Saturn axis, a very powerful combination for deaths and upsets.

In closing, Trump’s health will need to be watched in the months ahead. He needs rest instead of more stress. He may just get that rest. Then he can play golf to his heart’s content and get on with his business matters. It is looking like he is going to lose the Presidency, though we cannot be certain yet. The nation will be divided regardless. But time, age and fate are finally catching up with Donald Trump. These next months ahead will not be kind or easy for him. A big change of pace is on the cards for Donald J. Trump, and America is in for a bumpy ride.

One Reply to “An update on Trump”