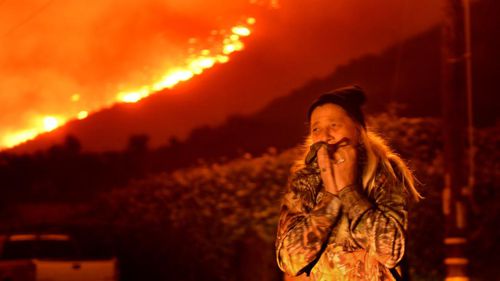 The Western coastal states of the United States are burning. We remember the terrible wildfires in California from the end of 2018. This year it is not just California, but the whole of the west coast of the US, excluding Alaska. As it currently stands, Oregon is getting hit the worst now, with over half-a-million people under evacuation orders. Not exactly what they need after Portland’s riots. California’s fires started in May and continue. Oregon’s started in August for the most part and the worst of Washington’s woes started in mid-August, with a state of emergency being declared for the state. Arizona and Utah continue to burn as well. What shows in the US chart that would signal such widespread devastation? There are indicators. What follows is a quick look at the astrology of the US in relation to these fires.

It has been a very hot summer thus far in the west of the US. August and September across the west have been drier than usual and then in September a late heat wave settled in. Temperature and precipitation maps for the September forecast tell a tale of extreme fire conditions across the west, with drought conditions worsening or continuing into the foreseeable future. Temperatures in California and western Arizona reached highs of 45+ degrees (113°+ F) across much of the state. Such conditions also provoke high winds which only go to fan the fires that are still burning. Climate projections forecast a gloomy future for the west coast into the future, with this year being the third-hottest on record for the past 126 years. 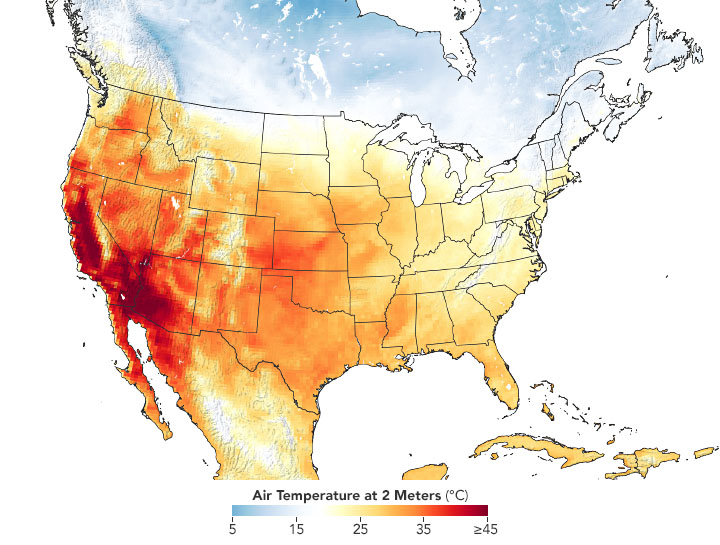 A quick glance of the US chart (below, bigger) shows disasters in the making, with the directed Mars/Pluto midpoint conjunct the US Ascendant. It came within a degree of orb about ten months ago, in November of 2019. Shortly after that we began to hear about a new little virus being noted in Wuhan, and then in Italy. Then that became a disaster for the US. 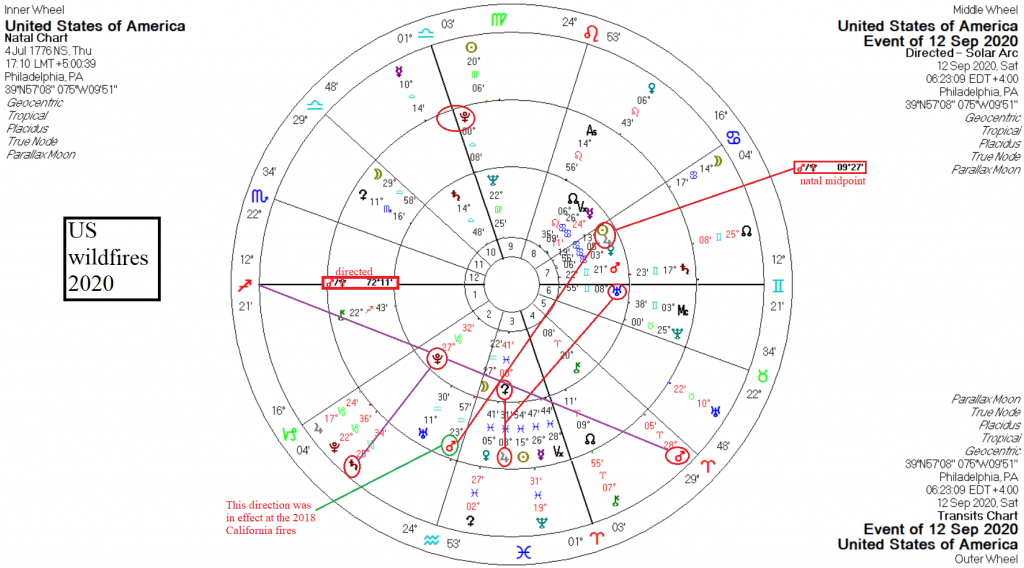 The Mars/Pluto midpoint is rather interesting. It has been called the ‘operation midpoint’, as in surgery, and has been noted in many major disasters. When it conjoins the Ascendant it can indicate disasters or accidents waiting to happen. If this happens natally it can signify a person who is accident-prone, but who at the same time is not at all averse to risk – a daredevil, in other words. It is a fearless combination and can mark either a champion or a sad case of being ‘born under a bad sign’, depending upon other factors being present.

Of particular interest for the US is that this Mars/Pluto midpoint is nearing exactitude with the Horizon axis at the US election on November 3rd. This Presidential election has been likened to a choice between a disaster and a catastrophe, referring to the Presidential candidates. The period from the election to the inauguration in January will be ‘interesting’ in the US, to say the least.

To paint the complete picture of the fires, then, the keys are the transits of Mars and Saturn to Pluto. Pluto is semisquare the US Ascendant natally, so whatever affects one by transit or direction affects the other, including the directed Mars/Pluto axis. Saturn made its retrograde ‘hit’ to Pluto in the first week of August, when the worst of the fires started. Mars was approaching the sesquisquare to the US Ascendant then, exact on 30 August, and made its retrograde station still within orb, two days ago as of this writing. That was when the Oregon fires made the news here in Italy, they were that bad at that point. In all, the combinations point to very strident and catastrophic conditions.

We note also that directed Pluto is now within a degree of orb of the US Midheaven, which also carries reflex actions on the 4th house (land and infrastructure). There are strong destructive natural forces at work on the US at the moment, in addition to destructive man-made forces. These will carry through to almost the end of the year. The fires may be out by then, but there are still other disasters and accidents waiting to happen, given the astrology of the US. And while the west burns, the east and the Gulf are being inundated with rain. We pray that the rain will swiftly manifest in the west as well and that a quick end comes to the fires. I will be posting more on the US elections in a few days.