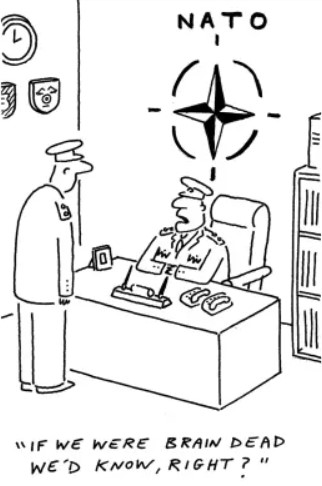 In an interview with The Economist a couple of years ago, Emmanuel Macron had the following to say about the NATO alliance: “What we are currently experiencing is the brain death of NATO,” His reference was in response to the actions of the Trump administration at the time in its relations with the EU. Trump, the epitome of the New York real estate mogul, had been poking at the Europeans to spend more money on US weaponry. Macron’s statement was the month before the pandemic began to grip the world’s attention and before the coming supply chain shocks and US actions overseas would enshrine his statement as being one of fact rather than conjecture. The question now remains, is NATO to be removed from life support and allowed to finally meet its end, or is it to remain as the shell of American influence over Europe for the foreseeable future? We’ll have a look at the astrology of the institution here.

In the same interview, Macron went on to say the following:

“Europe stands on “the edge of a precipice”…and needs to start thinking of itself strategically as a geopolitical power; otherwise we will “no longer be in control of our destiny.”

He was correct on one count, that of standing on the edge of a precipice. But in terms of being a geopolitical power, the EU has seen its stance in that regard substantially weakened in recent years. It is increasingly ignored by Washington, with no central military of its own, still beholden to Washington’s agendas (i.e. not having true sovereignty) and divorced from the UK. The EU is increasingly being weakened from within by infighting and the leadership in Brussels is still hooked into the ‘Russian threat’ narrative and stuck in an echo chamber of its own making. And, as has recently come to light, the EU is depended to a significant degree upon Russia for its energy needs, if the supply of those needs is to be economically viable. Yes, it’s about the gas crisis in the EU. That will play a role into the future, addressed later in this post.

As a geopolitical power, the EU has a ways to go if it aims to do so without Washington’s backing. But this is by design. It is already on the outs with the UK, one of the more powerful NATO members and the only European member aside from France who has nuclear weapons. NATO is a key to understanding why the EU is weak now, and this goes back to the creation of the alliance, the purpose being to “keep the Soviet Union out, the Americans in, and the Germans down”.

The Soviet Union from the preceding quote has been replaced by the Russian Federation, and it appears that same thinking is still in effect. Brussels just sent half the Russian diplomatic contingent to NATO packing, whereupon Russia in turn has suspended its diplomatic mission to NATO in full and will suspend the diplomatic credentials for NATO diplomats working in Russia.

Basically, Russia will be ignoring NATO and will speak directly to the United States on matters of military importance, seeing the EU NATO contingent as irrelevant. The Russians are out of Europe as a threat basis, this time by choice. Lord Ismay would be happy, the European business community, not so much. The manoeuvre by Brussels was an effort to show it still had some relevance. The Russians gave their answer, the result of more brain death from Brussels. Where is all this leading?

The chart for NATO was discussed in a previous post on this blog, so we will not go over the chart again here. Instead, we want to look ahead in reference to recent events, which go to show NATO’s increasing irrelevance to Europeans, despite the proclamations we see coming out of NATO headquarters in Europe. Certain events over the past few years stand out: