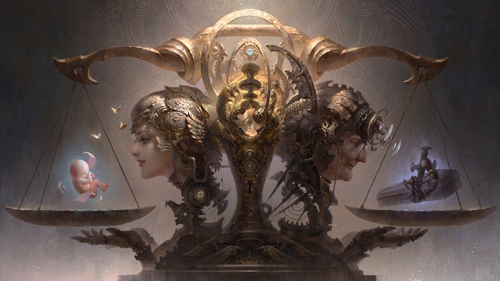 On the 23rd of September the Sun enters Libra, marking the equinox. The ingress figures into cardinal signs (Aries, Cancer, Libra, Capricorn) are important markers for the year’s quarters in mundane astrology, as they are known as ‘world view points’ and foreshadow the general tone of the quarter and the major events that might be on hand for that quarter. Aside from also marking the start of each of the four seasons, they also mark the seasons of public opinion and geopolitical moves. The Libra ingress in the past has marked financial crises and wars. Will it do so this year? Let’s have a look.

The chart for the Libra ingress, centered on London, is below (bigger): 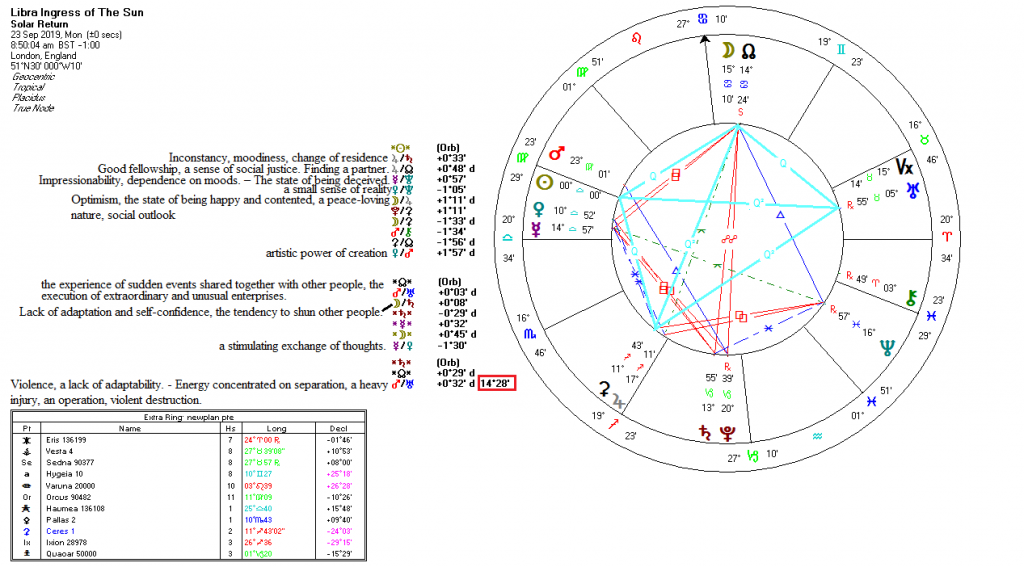 Before we get into the chart, we take a brief look back over the last quarter to see how matters played out. The forecast for the last quarter was for probable “brutal propaganda”, which we have been seeing. What we also saw was propaganda against the propagandists, i.e., against Washington; from Iran, particularly, warning of what would happen were there to be a war in the region – “The Middle East will go up in flames!”, and so forth. This type of rhetoric was also engaged in by Hezbollah and others. China and Russia have had their push-back as well. The problem there is, they mean what they say. They would be fighting for their survival, whereas Washington is not, at least not militarily.

Just a quick list of what did take place, then, in terms of the propaganda was as follows:

So, there was a little bit that transpired, and a few strong words spoken. This quarter looks to be different, though, without so much harsh rhetoric, and with more useful conversations taking the place of heated words. It seems that the world looks a little different these days after what has happened in the quarter just passed. Even Macron has taken note of the shifting order, though he still has a few areas to study more carefully.

To the chart for the ingress, then, there are no really big astrological events this quarter, as in eclipses and outer planet aspects, aside from a Saturn sextile to Neptune. But that points to  ‘dreams becoming anchored in reality’. The ‘heavy hitters’ with regard to more stressful events come in the first of next year, which we will examine at the next ingress article.

Mars is exact on the ingress point on 4 October. There is a new moon a few days before that on 28 September, which is also a super moon. When Mars arrives at zero Libra it activates a quintile trapezoid involving the Sun, Ceres, the Moon and Uranus in the ingress figure which has the capacity to be the catalyst for the release of considerable creative energy, which might initially be quite disconcerting, but will eventually settle into some quite pleasing results. We can probably expect those results to center around negotiations of all sorts.

On 7 October (median date) there is the last moon wobble of the year, which will be square to Saturn, direct finally on the south node. This will play into the Mars transit. So, the one-week period starting from the 4th October will be one to watch in terms of our emotional reactions and as a gauge of our ambitions. It is also one to watch for hubris and bad decisions, leading to downfalls.

Saturn on the South Node, as it will be in this quarter, has been called ‘the master of tragedy’, and it is often associated with deaths in the family and the like. It is one of the ‘death transits’, but it can equally mark the end of old situations, which needed to end anyway. And though they may seem tragic at the time, such events are very often blessings in disguise.

Of particular interest this quarter will be a Mercury transit across the face of the Sun – an ‘eclipse’ – on 11/12 November, which we will cover at the time. Mercury will be retrograde at the time, and that transit will form a triangle with Saturn and Neptune, the latter two being in their sextile by transit. That Mercury ‘eclipse’ will be a big event astronomically as well.

Ceres will be out-of-bounds throughout the quarter, and went out-of-bounds (OOB) on the recent full moon (14 September). Ceres OOB often accompanies major geological events (Ceres was associated with the underworld and with laying the earth to waste while she searched for her daughter) as well as major transport disasters.

There is one rather troubling midpoint in the chart – Saturn=Mars/Pluto – which will become fully activated when Saturn is exact on the point on 24 October. The full activation will start a couple of weeks before and last probably about a week afterward. The particular point is at 14°58’ of cardinal signs, and at 29°58’ of fixed signs. Any planets transiting over those points may bring up some rather unpleasant circumstances, as that structure is associated violence, destruction, separations and so forth. So, if we are to expect such events to occur, they will like take place from mid-October through the first week of November. And then Americans can settle in for Thanksgiving.

There is supposed to be one event that takes place in the aforementioned period, and that is the sought-after/ever-to-be-avoided date for Brexit, on 31 October. Halloween could be quite interesting this year. So, we’ll see if Boris is celebrating afterward or if he gets a lump of coal in his trick-or-treat bag instead. I hear he is going trick-or-treating this year as ‘The Hulk’.

To the period in general, then, we can expect to see more earnest negotiations taking place between conflicting parties. That means between the EU and UK, or between Boris and Parliament, between Bibi and Arabs (he may not have a choice if he wants to avoid prison), the Saudis and the Houthis, the Chinese and Trump (I wouldn’t bet money on that one), between the French and the Russians, between Europe and the Chinese, and on and on. Perhaps the picture is emerging.

If we look at the readings of the midpoints on the chart (above), we see a mix of hopeful and optimistic parties on the one hand and depressed and intransigent parties on the other. But there is also the possibility of bold projects being embarked upon, great creative energy and a stimulating exchange of thoughts. This is going to be one of those seasons that will be seen as a balancing period in world and personal affairs, as one would expect from Libra, once hostilities have died down. As in any court case, once agreements have been reached, people can get on with their lives and move forward – so long as imprisonment can be avoided. And the court of world opinion has been very busy in recent years. Trump is in campaign mode. Wars are off the menu now.

In closing, we hold the thought for heads and hearts to come together, for fresh ideas to be put forward and for bold initiatives for peace, however unsteady, to take hold. The possibilities for those things are strong in this quarter. Let those who dare to talk peace come forward.